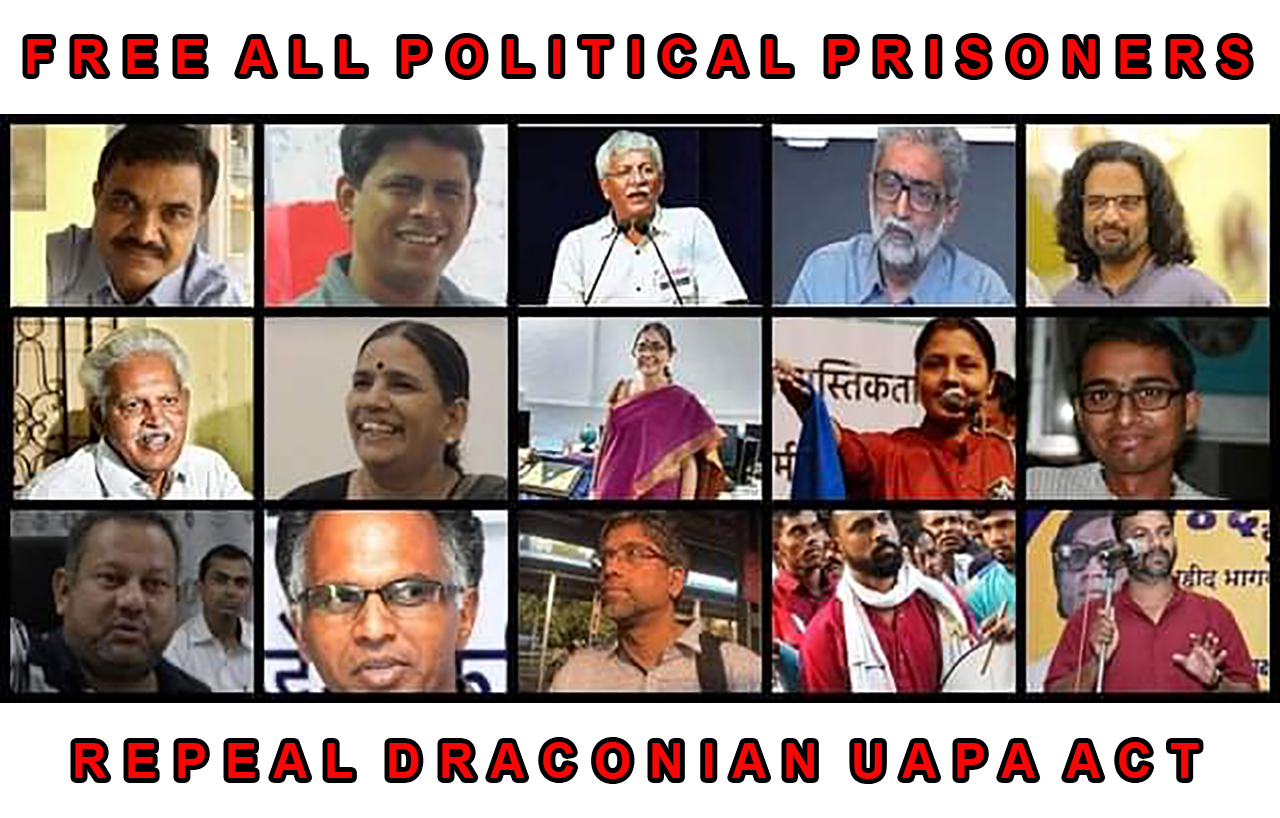 Narendra Modi-led NDA government had come to power amidst a lot of hype in 2014. During these last six years, however, the country has witnessed several steps which have proved to be divisive and anti-people. From the trifurcation of the state of Jammu & Kashmir leading to unprecedented removal of statehood for the region to CAA, from demonetisation and unplanned GST which had ruined unorganised and small and medium scale industries, the citizens had to bear the brunt of the misrule. Inadequacy in controlling riot In Delhi to mishandling of migrant workers during the recent corona pandemic has led to loss of valuable lives and properties.

This all-round failure is not the only characteristics of this government. They have been found busy in crushing any and every democratic protest in the name of national security and sovereignty. Hundreds of Dalit, Adivasis and democratic rights activists and politicians are kept imprisoned without trial for an extended period of time, even for a decade, in the states of Maharashtra, Chhatisgarh, Odisha, Jharkhand, West Bengal and other parts of the country. Akhil Gogoi and several others are incarcerated in prisons of Assam under UAPA for opposing the communally divisive CAA 2019.

In the name of investigating the Bhima-Koregaon case, first the Pune police during BJP rule in Maharashtra and now the NIA have targeted and harassed democratic rights activists. Thus, we find that leading public intellectuals like Varavara Rao, Gautam Navalakha, Sudha Bharadwaj, Anand Teltumbde, Shoma Sen, democratic rights activists like Arun Fereira, Rona Wilson, Vernon Gonsalves, Sudhir Dawale, Mahesh Raut, Hany Babu, a pro-people lawyer like Surendra Gadling or cultural activists of Kabir Kala Manch like Jyoti Jagtap, Ramesh Gaichor and Sagar Gorke were slapped draconian UAPA and are languishing in jails. Some of them are suffering from serious health issues, but still, they were denied bails. What connects these selfless people? They are trying to improve the condition of the marginalised sections of the society through upholding of the democratic values. Despite not able to file a single charge sheet against the arrested individuals, the NIA is summoning intellectuals like Dr. Satyanarayana, Prof. Parthosarathi Ray, Prof. Rakesh Ranjan, Prof Vijayan, Adv. Murugan or journalist Kurmanath. On the other side, perpetrators of riots in Pune in 2018, Milind Ekbote and Sambhaji Bhide were served an FIR and got bail in no time.

2020 saw one of the most shameful incidences of recent times. The Delhi riot has killed several and destroyed properties of hundreds of people. The Delhi police have taken a partisan line and have either arrested students from JNU and Jamia Milia Islamia or have registered false cases under different sections of the IPC and even under the UAPA. The Hindutva leaders and ministers/MLA/MPs like Anurag Thakur, Kapil Mishra and others have openly threatened and had fanned communal discontent, but they are still roaming around scot-free! In its zeal to bring in Hindu Rashtra,  not only the hate politics is being whipped up,  but also the all the democratic institutions of governance are dismantled or these institutions are made to tow the government line through coaxing /coercing them or bringing a pro-Hindutva person at their helm.

Thus, the present government has not only been anti-people, pro-corporate and communally divisive but are also responsible for slowly dismantling the autonomy of the institutions like the Planning Commission or the RBI which were existing until recent times. It is at this critical juncture, Coordination of Democratic Rights Organisation (CDRO) felt that it is their historic responsibility to bring together like-minded democratic and civil liberties organisations and stage a nationwide protest on 22nd September 2020. The motivations behind this protest are  to keep the flag of democratic struggle up and to reach out to the people. It needs to be explained to the people of this country, especially those who are still in two minds, about the significant negative changes brought about in the social fabric by the ruling fascist organisation. In their bid to establish Hindu Rashtra, the fascist forces of RSS, BJP and its sister organisation are trampling the democratic rights of the minorities, Dalits and Adivasis, other weaker sections of the society and rationalists.

Modi government shall stop forthwith the spate of the arrest of intellectuals and democratic and civil rights activists carried out in the name of Bhima-Koregaon case or Delhi riot case Today the number of people, intellectuals, Lawyers, Cultural activists and democrats arrested and incarcerated in the Elgaar Parishad and Bhima-Koregaon case has reached 15. Democratic right activists and leading public intellectuals of the country like Sudha Bharadwaj, Varavara Rao and Anand Teltumbde have all spent several months in prison without any trial. It is well-known that veteran revolutionary poet Varavara Rao is severely ill and had been hospitalised, Sudha Bharadwaj also has ill-health but their bail petitions have been denied. Recently Hany Babu, a professor from Delhi University and cultural activists of Kabir Kala Manch, Jyoti Jagtap, Ramesh Gaichor and Sagar Gorke have been arrested in the Bhima-Koregaon case. Son – in laws of Varavara Rao, Dr. Sathyanarayana, Kurmanath as well as scientist Prof. Partho Sarathi Ray of IISER Kolkata, Prof. Rakesh Ranjan and Prof. Vijayan of Delhi University have also been summoned some time back. The three lawyers who took up the case for the BhimaKoregaon case have also received summon. Now, Adv. Murugan of Madurai has also been summoned by the NIA.

It’s public knowledge about who all were actually involved in Delhi riot (Feb. 2020) and the Bhima Koregaon violence (2018). However, instead of probing their roles, we find that hundreds of Muslims and a group of intellectuals and the democratic rights activists are being arrested in connection with these cases. The spate of arrests continue. How far this BJP govt will go on repression is not beyond our perception. Former JNU scholar, Umar Khalid has been arrested in a false accusation of promoting communal violence. In the supplementary charge sheets filed by the police, renowned economic expert Prof. Jayati Ghosh, Sitaram Yechurry of Communist party of India Marxist, Yogendra Yadav the leader of Swaraj Abhiyan party, and Prof. Apoorvanand of JNU have been named. There was huge public outcry immediately over this. The names of Delhi documentary producer Rahul Roy, JNU students Devangana Kavitha, Natasha Narwhal, Jamia Millia student Gulfisha Fathima were also included in the supplementary charge sheet. No one can predict who will be picked next or be summoned by the NIA.

In February Delhi riot, 53 people were killed. Of these, 40 were from the Muslim community. In addition to this lot of damages to the properties and belongings of the Muslims took place. In this situation, the Delhi police authority has instructed its forces to downplay the violence by Hindu rioters in registering the charges as that might cause the anger and anguish amongst the Hindus. Last 8th July, Delhi Deputy Commissioner Pravin Ranjan ( ACP/DCPs – S&T CP/Crime (HQ), who is supervising the Delhi violence case, has sent such a circular to the officers handling the Delhi riot case. It is to be noted that Delhi High Court has condemned this. Even ex-Police officers have come out stating that this is against the customary practice of police and principles of natural justice. (The Wire, dated 15th July 2020).

It is well-known that Melinda Ekbote of Hindu Rashtra Agadi and Sambhaji Bhide of Shivraj Prathistan Hindusthan were the culprits behind the Bhima Koregaon violence. Two days prior to the Bhima-Koregaon celebration, these two people demolished the memorial of a Dalit leader Govind Gopal Mahar. During the Bhima-Koregaon event, they had conducted a rally and had provoked violence. No UAPA charge is slapped on them, except an FIR on IPC sections, like the way it is slapped on the Dalit and democratic activists. Even in these sections, the Maharashtra government had granted them bail in a few months and two are moving scot-free since then.

Kapil Mishra gave the open call that “the Anti-CAA protesters shall be taught a lesson” and still he is moving around freely! There are eight witnesses vouching for the presence of him and Mohan Singh Bhagat, the MLA from Karawal Nagar, Ex-M. L. A. of Mustafabad Jagdish Pradhan, Baghpat M. P. Satya Pal Singh and Councillor Kanhaiya Lal, who all have led from the front the violence in North Delhi. (NDTV.com). But the police authorities have issued an order not to proceed with any prosecution against the Hindus. Then how could the investigations go impartially! As Bharathi wrote once, today only the elites and the educated (threaded) rule the roost.

Modi government has failed not only in bringing the pandemic coronavirus under control but also in all other fronts. After leaving the responsibility to control the pandemic to the State governments, it was even not ready to return them the GST that was due to them. The private sector has resorted to retrenchment and wage reduction in a big way. Laws are changed such that it is friendly to them. After depriving the workers their due, now the laws are amended on the farming sector, snatching away their rights. Modi government has not even commented on the suggestions put forward by the economic experts on the cash transfer in bank accounts to the poor people and thus save them from hunger and deaths. This measure would have revived the failing economy at the same time. On the contrary, the Union government has utilised these circumstances to oppress the minorities and the marginalised sections of the society who are already suffering due to the different steps initiated by the govt. The government is also targeting public intellectuals who critique it and subjecting them to repression and harassment, and even incarceration awaits these spirited democrats. It has utilised the current helplessness of the people under COVID situation to execute its well-planned Hindutva programme. By turning blind eyes, we would lose our democratic rights whatever is left out. Hunger deaths are a regular feature now. If we continue to remain blind to the sufferings of our brothers mercilessly, the situation will worsen further.