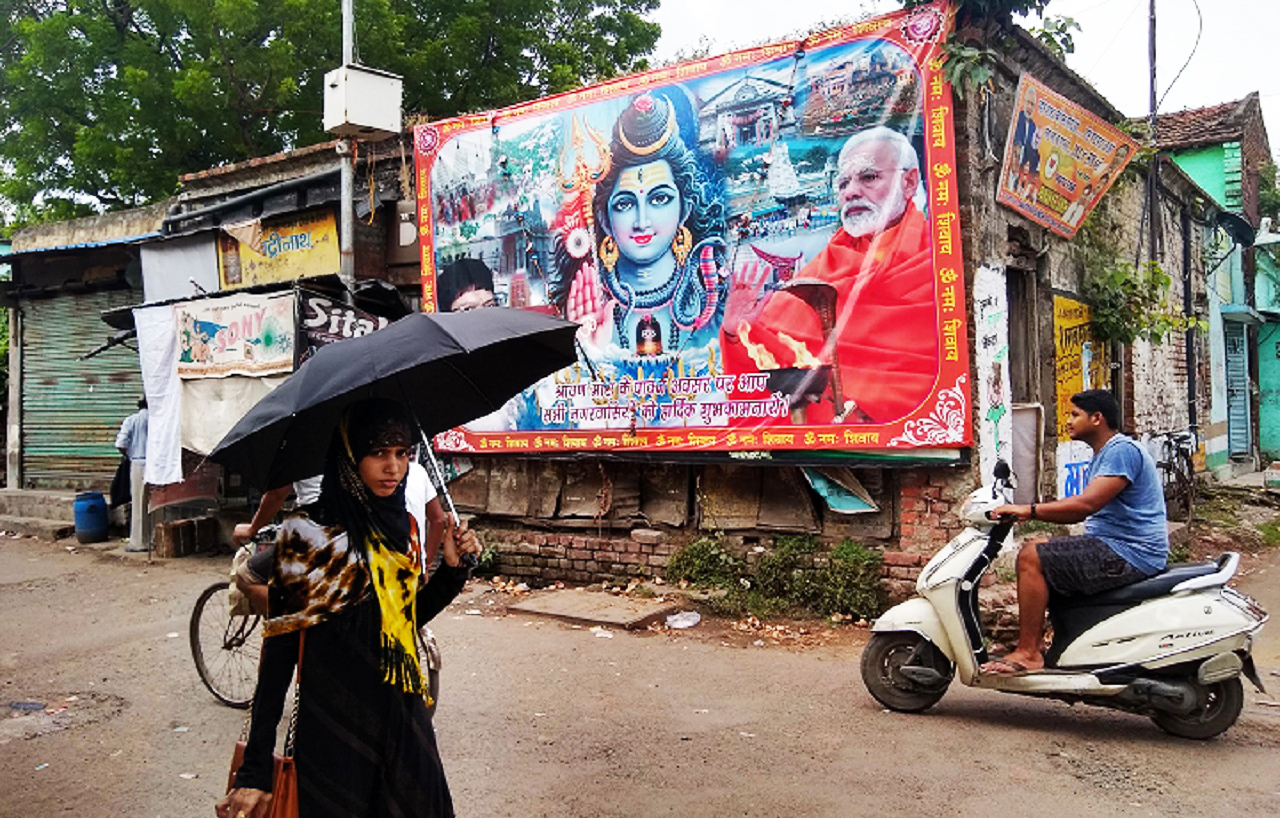 Bhatpara, is one of the most prominent names in the existing map of communal conflicts in West Bengal. Over the years, through various published and unpublished studies, AAMRA has noted that settlements near the Jute-mills along the river Hooghly are quite prone to communal polarisation and identity-led conflicts. This is a study of exploring identity consolidation in and around Bhatpara region through a series of fieldworks. This study unravels the complex politics-identity interface through intensive study of facts and artefacts. We have intentionally kept some of the raw data in the report, as there are more inconclusive questions than answers, as to what actually happened in Bhatpara over the years. There are multiple narratives, perspectives and dimensions to each of the conflicts that have rocked the political and everyday spectrum of West Bengal.

‘Into that heaven of freedom, my Father, let my country awake’

The latest in the series of  riots in Bhatpara was started on 19th May 2019, immediately after the 17th Lok Sabha Election, 2019. Communal politics has flourished here over the last few years. On behalf of AAMRA EK SACHETAN PRAYAS FORUM, we went there several times for documentation, before and after the 2019 riot. We documented different aspects of the large-scale criminalization of politics and communal polarization in the region. We visited the localities ravaged by the rioters and talked with the affected people. Seven people have died so far, though the number is contentious. The causes of the death are also contentiously different as per claims and counter claims made by the victim’s family, state and different political parties. People’s death due to bombs hurled at them and in police firing is a well-known and widely conversed fact in Bhatpara. Nevertheless, the reason for police firing is one part of a growing controversy. Arguments and counter arguments became part of  any discussion on Bhatpara violence. And perhaps the biggest of mysteries is whether the Bhatpara riot was a political conflict or a communal conflict or a combination of the two.

Our fact-finding actually started in 2018, when violence became part of everyday life in Bhatpara. We also conducted field surveys with the help of Bhatpara Nagarik Adhikar Rakkha Samiti at different times. After a year has passed, as we are just reviewing the old narratives, an upsurge in communal tension and conflict atmosphere is again slowly taking shape, using the newly constructed phrase, ‘Nizamuddin-Muslim-Coronavirus’. ‘Telinipara violence’ on the other bank of the river also started pretty soon, which resulted in the transformation of both banks of the river Hooghly into a communally tense zone.

Backdrop : History and Cultural Geography of the Region

Before independence, Bhatpara-Kankinara industrial area was famous for its Jute industry. There were eight Jute Mills; out of which four mills are now closed. One cotton mill and one wool mill which used to function are also now closed. Though, Fine Yarn Company of Champdani Industrial Group is still functional.

We restricted our study in the labor lines (worker’s colony) of Kankinara Jute Mill (KJM). People here are mostly migrants from UP, Bihar and Jharkhand. They have settled here before Independence and have since then worked in the jute mills, especially in KJM. About 7000 people lived in these labour lines which has 1400 quarters. Among them about 20% are no longer connected to the Jute mills, but have stayed in the workers line for generations. Roughly, Hindus constitute 85% and Muslims about 15% of the population. Riot in 2019 displaced 670 persons from 134 households and among them about 90% are Muslims. The displaced persons belong to Darma Line, Tina Gudam, 4 Number Line, 6 Number Line, and 5 Number Railway Siding.

Clearly, Bhatpara is continuing in the news for all the wrong reasons. Political and communal clashes at Bhatpara in the Barrackpore Lok Sabha constituency have claimed many lives and left more people critically injured. On 10 June, 2019, two Muslim persons were brutally killed by Hindus. It was in Baruipara area, where series of bombing, burning of Muslim houses and open threat to Muslims became a everyday feature since May, 2019.

Violence flared up again on 20 June, 2019, when the inauguration of Bhatpara Police Station was going on. According to statements of different eye witnesses, violence started in the surrounding areas of Reliance Jute Mill, from morning around 11.00 am. At 11 am, after the end of the morning shift in the jute mill, workers were coming out. Three bombs were thrown on the top of the labor office beside the Jute Mill. A police officer was present there, and workers called him to do something, but he told them, leave this place right away. Bombs were being thrown rampantly. Violence flared. The police, who did not take any precautionary steps after the 10 June incident, started indiscriminate firing. One and half kilometers from the Jute Mill is Kachari Road, where police fired on the order of Ajay Singh Thakur, DC.

A total of 29 people have lost their work (job at Jute mill) after the riot. Among them 27 are Muslims and two are Hindus. Seven people, among them five are Hindus, who have lost their life in the riot and the post-riot violence.

About 200 families residing in labor colonies like Tina Gudam, 4 No, 6 No and 13 No line, Darma line were directly affected. Numerous people lost their livelihoods. Almost everyone suffered loss and damage to property.

Our team attempted to reach all the conflict areas and tried to talk with all stakeholders. Our repeated request to talk to the Police and the local administration was refused. We also made attempts to talk to political leaders, but no response came from their end.

The Sandwiched Space: Conflicts and Co-Existence

What does the word ‘line’ stand for? If you are not accustomed with the word ‘line’ or ‘kuli line’ or ‘shramik line’, you need to understand the many dimensions of the word ‘line’. Lines are supposedly linear settlements of ‘outsiders’ who have historically settled down in the region to earn a livelihood from the nearby jute mills. Although today one cannot trace such linear settlements anymore, as over the generations, these people have spread out to shanty-like constructions in various clusters. The names, however, remained. Therefore, you can find Darba Line, Tina Gudam, Sadar Line, 4 number line, 6 number line, 15 number line and 5 number line railway sidings. If you ask them about their places of origin, you will get a prompt reply that they belong to West Bengal, as most of them are born and brought up in Bhatpara, West Bengal. This is also a strategic response to deny the inflicting of ‘outsiders’ tag being put on them. One might like to know about the settlements of these so-called lines. First of all, it requires an extreme level of mutual tolerance to live in a place, which shares a thin wall with the neighbours. We have seen people belonging to different faiths living in adjacent homes, sharing the same source of water, the same community bathing space, and the same large community toilet. The community toilet is an interesting construction. It looks like some old and abandoned building with about a 24-30 feet high platform. The size of one such community toilet can be approximately 25 square feet. Though one cannot see anything from outside, we were told that inside there is no privacy, and one can actually see human excreta floating all around. When it rains, people face a similar situation in their narrow alleyways and if the rain is heavy, the stinking dirty water enters into their small rooms. Understandably, without mutual cooperation, these people could not have survived since the colonial period. We have seen the same common place being used by the Hindus and the Muslims to keep their Idols and Tazia of Muharram. However, we have also seen mutual hatred, avoidance and bloodshed. 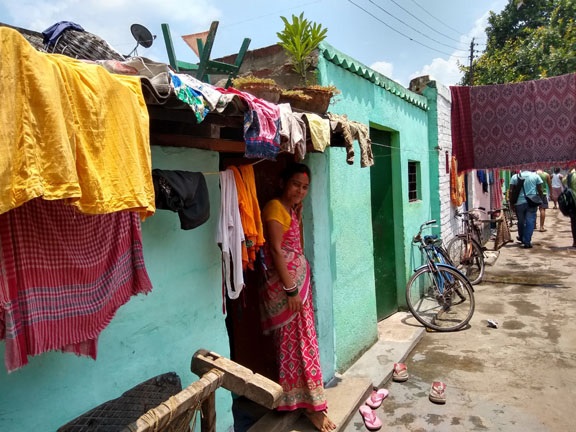