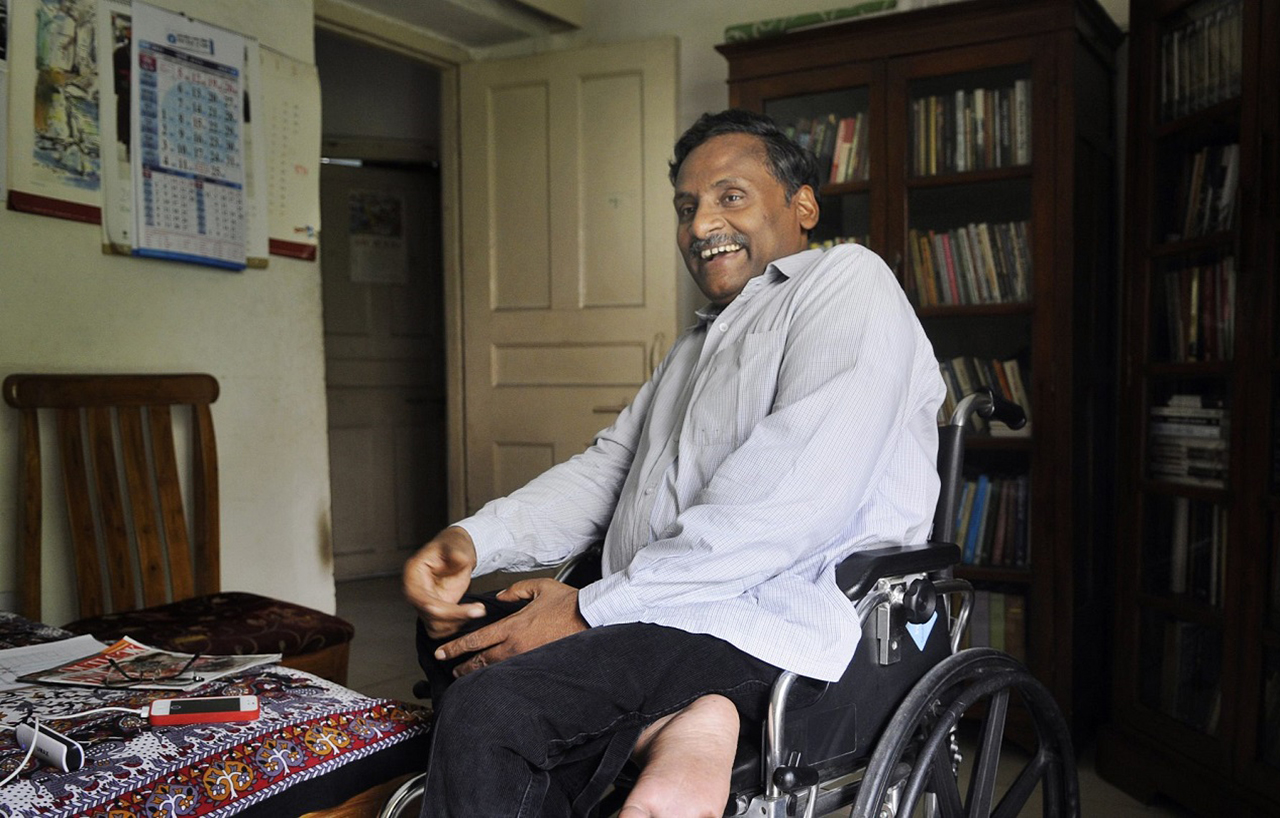 Alarmed at the news of COVID-19 outbreak in Nagpur Prison, where Dr. G.N. Saibaba has been lodged inside an anda cell, his wife, mother and family members has issued a Press Statement appealing to the Maharashtra State Government and the Central Government to release him on bail or parole immediately, so that he can be provided appropriate medical treatment either at Hyderabad or Delhi, where his family members are living.

Prof. Saibaba, a wheel-chair-bound teacher with 90% physical disability was arrested in May 2014, after the police in Gadchiroli, Maharashtra, claimed he had links with Maoists. Saibaba was sentenced to life imprisonment in March 2017 by a Sessions Court after being found guilty of ‘waging war’ against the Indian state. He has been in Nagpur Central Jail since then.

The press statement by his family members argued that the spread of the COVID-19 virus inside the prison space is likely to be a death sentence for Dr. G.N. Saibaba, given his precarious health condition. Once, Saibaba is infected, there is little chance of his recovering from COVID19. The statement ends with the demand for release of all the incarcerated voices of democracy and their right to life.

The prison authorities gave special permission to Prof Saibaba to explain his condition to his lawyer and family. Dr G.N. Saibaba in his most recent call to his family and advocate informed that there has been an uncontrolled outbreak of COVID-19 in Nagpur Central Prison. Despite the preventive measures taken by the jail administration in an active way, COVID-19 has infected 100s of prisoners, including convicts, undertrials and even the jail guards. The infections are widespread and on a large scale, where barrack after barrack is being infected. On 8th July 2020, all 20 prisoners of Anda cell have undergone COVID-19 swab tests and one prisoner was found infected. “The disease has reached very close to me”, Saibaba said, and that it was only a matter of time” since it reaches his cell. Because of his weak health and existing co-morbidities, Saibaba is further in a more vulnerable situation with his damaged and low immunity. According to him, even the officers who used to roam the barracks contacted COVID. There is no special care or treatment in order to combat this. Moreover, he has not been provided with his treatment for his other serious health ailments. Saibaba (53) is an easy target for the virus, and once infected, he cannot recover and survive on his own from COVID. The jail has not assigned him ‘helpers’ to take care of his daily needs and he is being forced to live in unhygienic conditions. Especially when infected, he will be left alone. This is a dire case as once he tests for COVID positive; he will be either confined to his cell with no helpers and he will not be allowed to shift to the family for healthcare. This is a certain death sentence for him, as he is one of the most sensitive to infections in his current conditions.

During his previous telephone call on 6th July 2020 he informed me that his health is not in good condition. The jail authorities took him to Nagpur Government Super Specialities Hospital two times during the COVID-19 lockdown. He was taken to 5 various departments in the hospital and advised to undergo more tests and prescribed some pain killers. The Hospital conducted MRI-Brain scan, other tests, and reports have not been given so far. Even after several requests, the old diagnostic test reports since September 2018 have not been provided. As the medical records are not available the family members were not able to take the advice of their family doctor on his health issues.

The Nagpur Government Super Specialities Hospital doctors on 25th June 2020 again advised to go for surgery to remove Gall Bladder. But under his deteriorated health conditions and existing pandemic COVID-19, the surgery is not advisable as the chance of infection is more. The Nagpur Government Super Speciality Hospital doctors again suggested using cold and hot packs regularly, use the medical bed for sleeping and six side pillows (to relieve continuous shooting pain) were not yet provided.

So far, no supporting attendants have been assigned to him. Due to the non-availability of the attendants, he is unable to perform his routine day to day activities including going to the toilet. No one is there to help him and therefore he is using very dirty and unclean clothes and bedsheets for a long time. Such an unhygienic environment most probably leads to bad health conditions including allergies, infection, etc.

He has been denied newspapers since March. Dr GN Saibaba informed that his left hand is totally on the verge of failure. The nervous systems further affected the right hand also. Acute pain is spreading along the length of both the hands up to the fingers.

The first parole application was rejected citing that his brother’s residence was in COVID containment zone as reported by Cyberabad Commissioner. His brother applied again for Saibaba’s parole almost a month ago, but there is no response from the concerned jail authorities.

On 14th July 2020, again a writ on medical grounds came before the Bombay High Court Bench at Nagpur and the honorable High court gave 10 days’ time for the prosecution to submit its reply and scheduled the case at the end of July.

Dr. G. N. Saibaba suffers severe physical pain caused by the degeneration of muscles in his hands. He is plagued by pancreatitis, high blood pressure, Cardiomyopathy, chronic back pain, immobility, and sleeplessness. Consequently, his physical ailments intensified while the lack of pain relief and neglect due to inadequate medical facilities further debilitate his already fragile health. Despite interventions made by the National Human Rights Commission and authorities of international human rights organisations, the Courts have repeatedly denied him bail. Undue delays without bail for the incarcerated are a blatant denial of the fundamental right to life and liberty guaranteed under Article 21.

The Supreme Court of India has upheld the right to life and reflected on prisoners observing that “the treatment of a human being which offends human dignity, imposes avoidable torture and reduces the man to the level of a beast would certainly be arbitrary and can be questioned under Article 14”. India is also a signatory to the International Covenant on Civil and Political Rights (ICCPR), which recognises the inherent dignity of human beings and the ideal of free human beings enjoying civil and political freedom. Furthermore, India has ratified the UN Convention on Rights of Persons with Disabilities (CRPD) on October 1st 2007. India has even adopted the United Nations Resolution 70/175 on Standard Minimum Rules for the Treatment of Prisoners (also known as the Nelson Mandela Rules). These covenants, conventions and resolutions ensure life and dignity to all persons, prisoners and persons with disabilities and layout the essential parameters necessary for its implementation.

The spread of the COVID-19 virus in such a space is likely to be a death sentence for Dr. G.N. Saibaba.  In such a precarious health condition of Dr. G.N. Saibaba, we appeal the Maharashtra State Government and the Central Government to release him on bail or parole immediately so that he will be provided appropriate medical treatment either at Hyderabad or Delhi where his family members are living.

Release all the incarcerated voices of democracy and uphold their right to life.