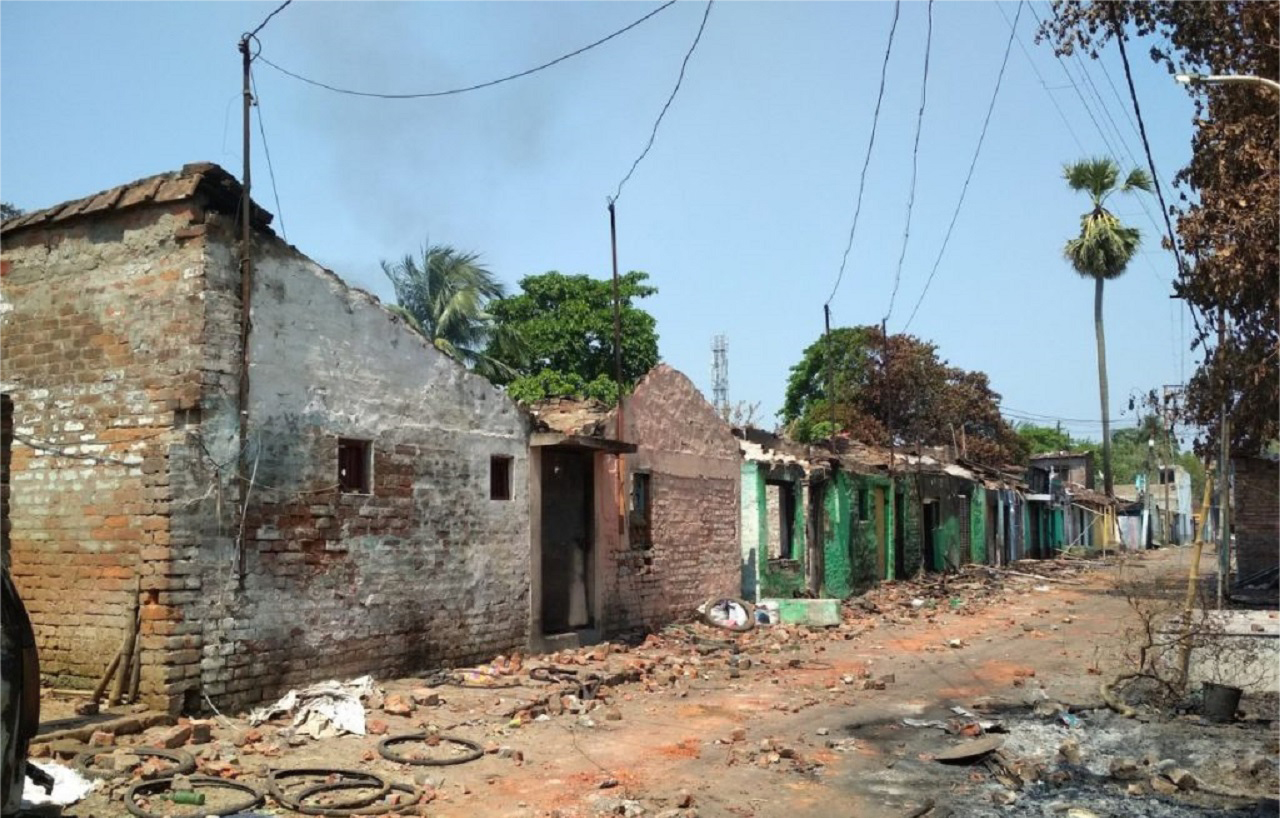 Members of a Civil Society Group Detained by Police in Telinipara

Members of AAMRA (An Assemblage of Movement Research and Appraisal) – a study group on conflict and coexistence, were detained by the police in Telinipara, in Hooghly district of West Bengal, who went there on a fact finding visit. A report by GroundXero.

On 10th June, a fact finding team of AAMRA visited Telinipara to talk to the victims of recent communal riots, to assess the need of relief efforts in terms of medical camps, distribution of relief material like medicines, garments and food. Both the Muslims and Hindus, who were affected from the communal violence and suffered further due to the ongoing lockdown owing to COVID pandemic were visited by the team.

The fact finding team was merely interacting with some of the riot affected families in shelter camps and taking photographs of the damaged properties, when the police stopped them. They were taken to the police outpost, interrogated and detained for more than three hours, their mobile phones and cameras were seized and they were even threatened with arrest. The police termed their visit illegal and said that they should have taken permission from the Police Station before entering the area. The fact finding team members were accused of doing illegal work by talking to the people and blamed for instigating the people.

Farooque, a member of the fact finding team told GroundXero, “We repeatedly told the police the purpose of our visit. We pointed out that it is our fundamental right to enjoy free movement anywhere within the country and to meet anyone unless prohibited by law. The second officer of the outpost was very aggressive. He threatened us with arrest on six or more charges.”

It needs to be remembered that while the whole world has been fighting the coronavirus, Telinipara, a locality in the suburban West Bengal town of Bhadreswar, 40 km north of state capital Kolkata, has been fighting communal tension since May 12. Telinipara, on the bank of river Ganga, once famous for its jute industry, came into limelight for communal violence and disturbances during the lockdown. There were multiple reports about arson, looting and damage to properties in the area. The district magistrate had imposed Section 144 and also suspended internet services in the entire region.

The Wire published a report: Ground Report: What Really Happened in Violence-hit Telinipara, West Bengal, which pointed to  a planned attack which was systematically executed by right wing communal forces active in the area. The report mentioned multiple evidences on the ground to show that Muslim houses and shops were singled out and strategically targeted. The locals allege that the attack was carried out by people coming from ‘outside’, aided by some locals familiar with the area. The infamous IT cell became active and a lot of fake news and videos unrelated to the incident was circulated on social media, planting a narrative that Hindus were in danger in Telinipara. A Wikinews page dated Tuesday, May 12, 2020, bore the title “2020 Telinipara Anti-Hindu Pogrom”.

AAMRA has been doing research and studying conflict in such violence affected areas in West Bengal for the past decade. It has brought out a number of valuable reports on incidents of communal violence in the recent past, in the state of West Bengal. Teams from AAMRA had already made a number of visits to Telinipara and the fact finding work on June 10 was a continuation of that work.

The study group has sent a protest letter to the higher police authorities, condemning police excess committed in Telinipara upon human rights activists, demanding appropriate steps to be taken against the concerned police officers and to ensure the organization’s right to work freely in the area as a registered research group. The letter categorically refutes all allegations by the local police as without any substance and clearly stated that they went there on purely research and relief purpose.

Centre for Study of Society and Secularism (CSSS) has also condemned the detention of  the members of AAMRA who were in Telinipara for a fact finding visit. CSSS, in a statement, said such police action will dampen the work by civil society organizations like AAMRA, which are helping out vulnerable groups during these challenging  times marked by pandemic, poverty and hatred. It appealed for justice and cooperation from all quarters for such initiatives.

Human rights and civil groups visiting violence and conflict areas to talk to the victims to dig out the truth beyond what is told by the state – the police and the ruling government, is an age old democratic practice in our country. Recently, with the rise of communal right wing forces and their hold on state power, the human right activists all over the country are under attack. Many are incarcerated in false criminal charges including the draconian UAPA. The present state government should not forget, it was many such civilian fact finding teams and their public reports on atrocities in Singur and Nandigram that helped in dispelling the propaganda in favour of land acquisation by the then ruling party and the mainstream media. It is absolutely illegal for the police to ask activists to seek permission from them for every visit to the affected area. Such police interference is absolutely unwarranted and needs to be condemned by all democratic forces.

Cover Image : The aftermath of the communal violence which erupted in Telinipara. Photo: Himadri Ghosh