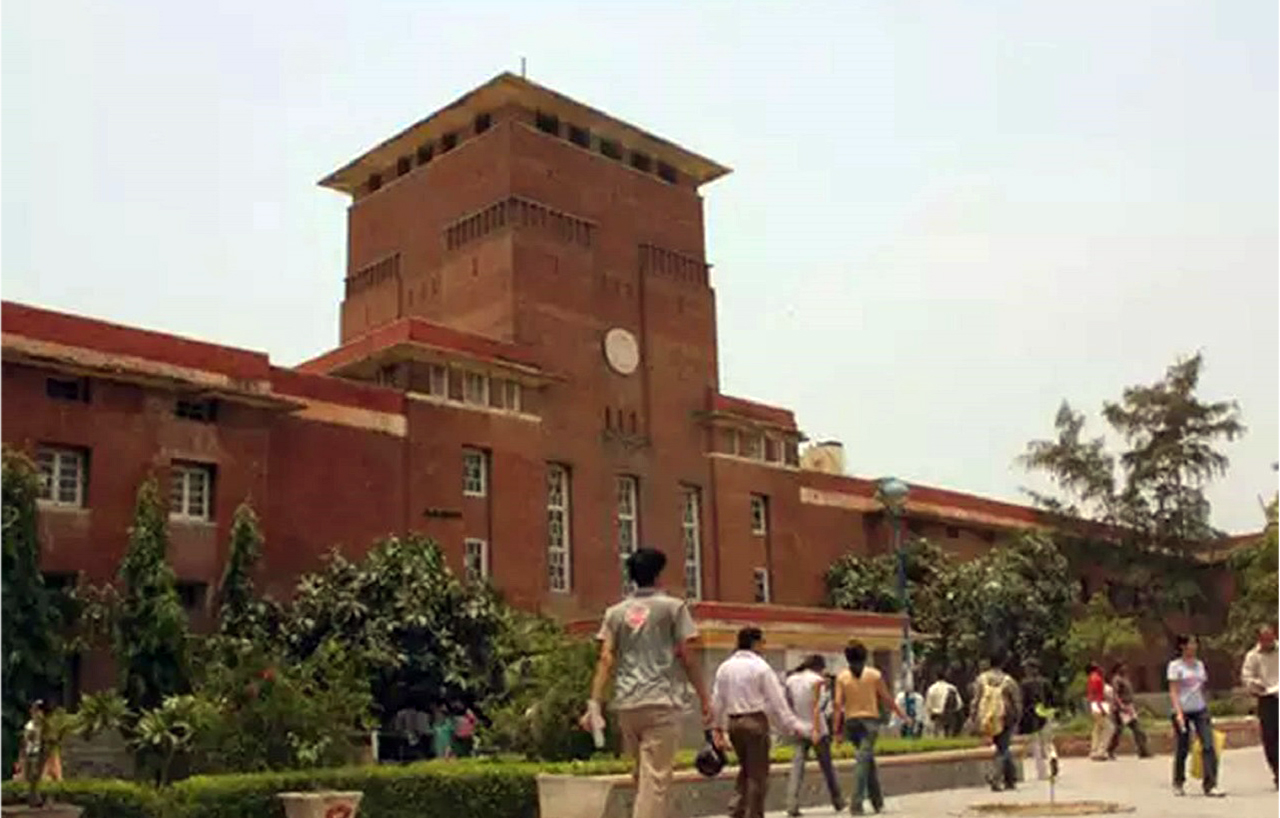 The English Department of Delhi University has written an open letter to the University after its plan to conduct the end semester exam of its final year students from 1st July. The university’s proposed online Open Book Examination (OBE) format and the haste to execute it against all opposition reflect poorly on the approach to education and its accessibility that the university endorses.

Below is the unedited copy of the open letter on behalf of the students of the English Department of the University after attempts at raising concerns with the department failed miserably.

An Open Letter to the University of Delhi

Delhi University is preparing to conduct the end semester exam of its final year students from 1st July. The proposed online Open Book Examination (OBE) format not only lacks infrastructural viability (not just on the part of students but also from the side of the university whose servers even while declaring semester results often get bogged down) but is also devoid of any ethical strong-base; institutionalizing, in a blatant manner, inequality and discrimination. The proposed format and the haste to execute it against all opposition reflects poorly on the approach to education and its accessibility that the university endorses. Claiming to be an important educational space that brings together students from various regions and social sections, the university by staunchly refusing to accept criticism and roll back a discriminatory and unfeasible policy is gearing to lose any claim to such a characterization.

While the university has to justify why only the final year students should be treated partially and made to suffer at the hands of a policy that has seen no precedent in the same university; they also have to justify why the final year students should not be seen as human beings trying to survive in the middle of a pandemic, like the first and second year students and students from universities that have cancelled their exams over and above their identity as a “student” in a highly competitive and “merit” (read class, caste, colour, gender, social identity) driven society. The university, while beginning its instruction manual, opens with an expression of concern for its students and their “learning and evaluation” process, its policies fail to reflect this verbal concern. The university should come forward and justify, as it claims to be an educational space and a seat of all societal changes, why the end semester exam matters disproportionately more in the case of final year students and not students in intermediate years. How does it make a student less qualified if they have been promoted on the basis of alternative evaluation methods in their last semester and does not seem to weigh if the same happens in one of the other semesters?

While claiming to implement this policy to safeguard the future prospects of students who want to pursue their career further, the university does not seem to take into account the fact that such a move will adversely affect the students who are left out and cannot appear in OBE.

After a pandemic that has brought such travesty, everybody is uncertain of what the future holds and nobody can vouch for the fact that the future will be judged according to the same conventional rubric of “marks” to determine the acumen of a student. DU by putting the final year students through an ordeal during a humanitarian crisis is resisting to allow progressive and compassionate changes in its rigid system and is staunchly adhering to a hollow “marks-based” model of education.

The university clearly pushes the students who cannot fit in their idea of a “modern student” and cannot appear for OBE outside the line and jeopardizes their future prospects instead of looking out for them. It sees the “left out students” as exceptions and frames a discriminatory policy favourable for none. Talking about future prospects, dates for further entrance exams, tests and interviews will be announced in accordance with the official academic calendar of the university which takes the OBE as the official exam and will not wait for the students that are “left out”. These students will have their destiny pushed to uncertainty by the university as it has not even announced proper alternatives for them beyond the postponing of the issue to September. It has not displayed any insight in case the pandemic presents new situations to students and such a commitment cannot be followed through in September.  This policy creates and furthers inequality and discrimination and puts the already disadvantaged under immense pressure and discomfort and makes them suffer the costs of the pandemic disproportionately and almost exclusively.

The University has said that the OBE requires only “limited internet availability” for downloading and uploading the question paper and answer sheets and has proposed a vague but complicated and unfeasible alternative in case there are glitches. Firstly, the university forgets that the duration of availability of internet connection is not the question, but rather, the quality, consistency and accessibility of it. It is a known fact that connectivity is an issue in most rural parts of India and even in cities. The university underestimates the struggle to download a question paper. More so given the fact that power supply, device batteries, the condition of the device etc. matters a lot when it’s a question of speed and efficiency. Even if the university gives us many more extra hours, they have to justify and ensure that other students who have speedy access will not use this time to enhance their answers and work on them.

More importantly, the university is blatantly turning its eyes blind towards the issue of the access to these technologies for the PwD students. Browsing the websites, correcting glitches by contacting the helplines or even getting to understand the nature of a technical glitch will not be easy for a person with disability, especially if they lack technologically adept help at home.

The university has provided the option of approaching a CSC and instructed the persons with disabilities to bring their own scribes. This is an unfair expectation on many levels. It burdens them to arrange for scribes, which they otherwise arrange from the campus, and travel to CSCs in a pandemic that demands social distancing and puts everyone who steps out at risk. The university has given no assurance whether the format of the website and the question paper will be friendly to them and ignored them blatantly by putting forward a policy which is extremely ableist.

The university promises a one hour window for solving technical glitches, which seems like a worn out band aid shabbily thrown at our concerns. Solving glitches is often not in the hands of the students, especially if they are from the side of the university, like the server getting bogged by so many uploads at the same time or so many people accessing it at the same time (which happens all the time with the DU website during filling forms or checking the results). The alternative email and WhatsApp options that have been provided seems to give more space for adoption of unfair means by some, keeping open avenues of disadvantaging the others. Further all the suggestions that DU provides for correcting technical glitches are also heavily based on internet connectivity, since WhatsApp and email require the internet. Calling the department office will also prove a challenge to students living in areas with bad connectivity but DU has also not taken into account the fact that the helplines might become very busy and students might not be able to connect to them and solve their problem in time.

The university not only ignores the lack of infrastructure but also the fact that most students were forced to vacate their residences from Delhi in the rush of the pandemic and a sudden lockdown. Many students have not been able to carry their books or study material with them and have no way to acquire them. Further the access to e-resources to some and not others deepens the unfairness of this format, alongside many other ways in which this exam can prove as an unfair means of evaluation for some students. The university has taken no initiative to provide equal access of study material to all students and has not been consistently providing online classes across all courses and not even considered that online classes even if conducted still raise the same questions of inaccessibility.

The university is also being insensitive towards the mental health of the students by expecting them to force themselves to get back to a “normal” academic routine in the middle of a worldwide crisis, and by expecting them to solve all technical glitches, travel from home to CSC’s risking their lives and still being able to produce a worthy and academically sound and well analysed answer to their question papers, reducing education to a mere “mechanism”.

Furthermore, the university is also conveniently assuming that no student and their family members have tested positive for COVID-19 and that no student has any medical emergency or care-work to tend to that will make it impossible for them to simultaneously manage everything and prepare for an exam.

At a time when the youth should be encouraged to contribute helping hands to the crisis that the country is going through, the university is pulling them into a futile and unnecessary process and occupying them mentally and emotionally.

The students of the English Department conducted an online survey, in which 183 students out of a total strength of 328 were able to respond, and forwarded it to the concerned authority. No such effort has been seen from the part of the authorities to understand the students’ concerns. We are yet to receive a proper response for our concerns.

Here is the link to the results of the survey that we conducted: https://drive.google.com/file/d/1wFUndPoANcEcokJ67wwQgCsC2tOYbGGf/view?usp=sharing

In view of the aforementioned issues which are only the tip of the iceberg, we implore the very prestigious Delhi University to roll back its discriminatory policy so as to not jeopardize the future prospects of its not so privileged students.