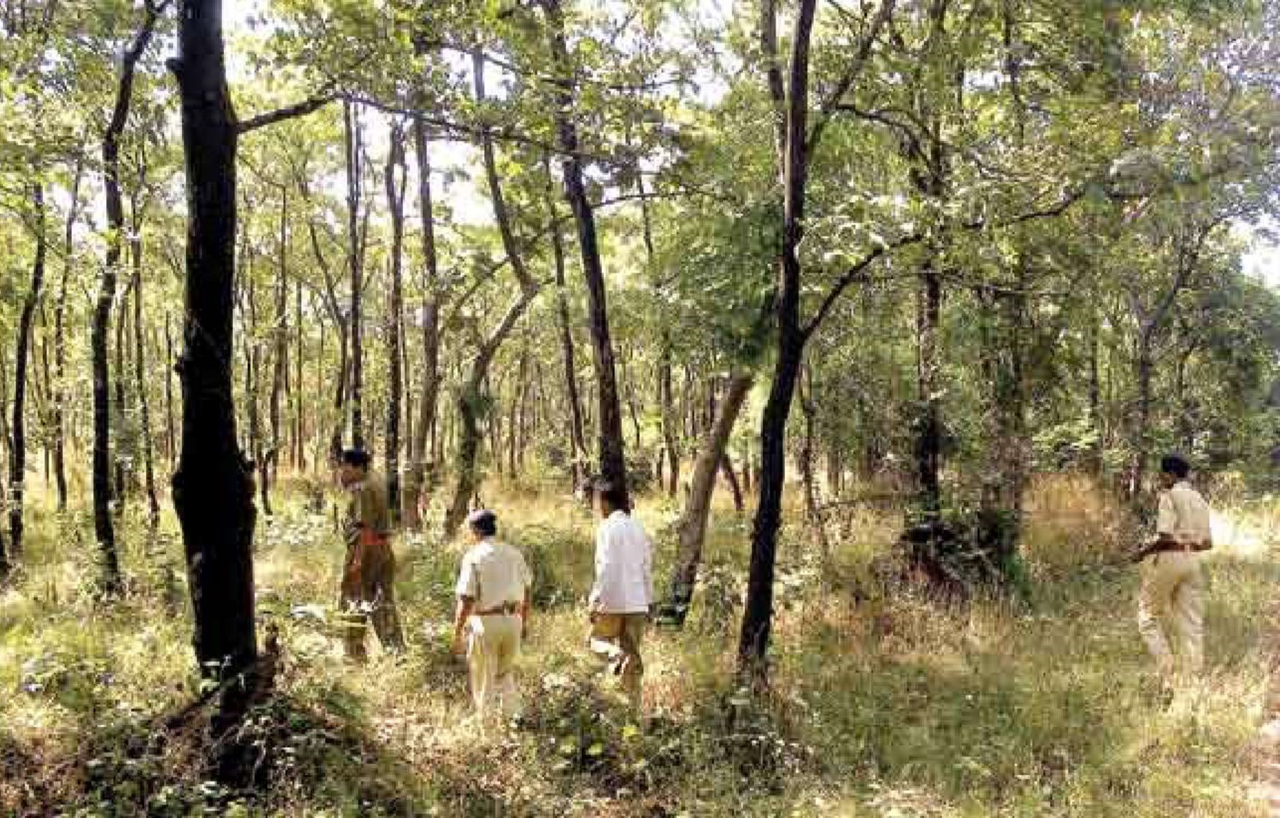 In a Press note released on 15th May, several tribal rights groups, campaigners and activists have dubbed the announcement of transferring CA(CAMPA) funds (6000 crores) as mere eyewash, which will only exacerbate the distress situation that tribals are already facing and provide no relief to them. Besides, they pointed out, allotment of money from the CA fund cannot be treated under any circumstances as part of a economic package declared explicitly for addressing the Covid19 pandemic situation. Transfer of CA funds to Forest Departments will allow land grabs for commercial plantations and will increase distress in Tribal areas.

Finance Minister Nirmala Sitharaman announced on Thursday that plans worth Rs. 6000 crores would be approved under the Compensatory Afforestation Fund Management and Planning Authority (CAMPA)[1] as part of the “Atma Nirbhar” or “self-reliant” India economic package announced by the Prime Minister Narendra Modi.

We need to remember that the issues of all-pervasive deprivation persisting in tribal areas have not been addressed: a crippling lack of public healthcare that severely limits the capacities to curb the spread of the disease, tens of thousands of tribal migrants stranded in cities, lack of institutional mechanisms and access for procurement and distribution of minor forest produce (MFP), rampant deforestation in the name of forest land diversion without the consent of the communities, violations and non-implementation of progressive legislations like Forest Rights Act, 2006 and PESA et. Moreover, a release from the CA funds is a routine affair and can in no way be included in a special economic package meant for Covid relief.

Instead of taking progressive steps that adequately honour the law of the land and respect the autonomy and dignity of India’s tribal and other forest communities, funds have been approved under the old CA scheme, which has been contested by forest rights campaigners and tribal organisations in India and the world over ever since the controversial Compensatory Fund Act has been first mulled back in 2015. It has been repeatedly pointed out that the Compensatory Afforestation is largely a scam and at best an attempt to greenwash the trail of organised and licensed deforestation in India, also that channeling unlimited money to the forest bureaucracy has the potential to destroy the livelihoods  of millions of forest dwellers including tribals, causing great ecological damage and aggravating further displacement and exploitation of the forest communities.

Not only the forest rights campaigners and tribal groups, but the CAF act of 2016 has been questioned also by the tribal ministry of the Indian Government. In a letter to the Ministry of Environment, Forest and Climate Change (MoEFCC) written in March 2018, the Ministry of Tribal Affairs(MoTA) had argued that the draft CAF rules dilute the provisions of the FRA.

This announcement for releasing CA funds to the states for ’employment generation’ ignores the concerns raised by tribal groups on continual violations of land and forest rights by CAMPA plantations on the one hand and large-scale denudation of natural forests on the other. Tribal/forest rights groups have earlier opposed the Compensatory Afforestation Fund (CAF) Act and rules which allow for unjust as well as illegal transfer of CA funds to the forest departments. It is important to reiterate that compensatory afforestation is not tribal-friendly–instead it causes double deprivation of the communities by

Since the CAF bill has been tabled in 2015, the tribal/forest rights groups have consistently demanded for democratic management of CA funds by transferring such funds to the Gram Sabhas and ensuring that the CA activities are taken up with free prior consent of Gram Sabhas (GSs) as mandated by FRA and The Provisions of the Panchayats (Extension to the Scheduled Areas) Act, 1996 (PESA). This demand has been further re-iterated in the light of Covid19 outbreak, so that the Gram Sabhas can utilise the already collected CA funds standing at a massive 57,000 crores today, to implement FRA and respond to the diverse geo-specific and community-specific local needs of India’s tribal and other forest dwelling communities.

Going by past experiences, the state forest department (s) have kept on using CA funds to set up plantations (mostly monoculture and commercial species) in lands cultivated and used by tribals and other forest communities and also inside standing community forests, leading to violations of rights and conflicts. Monocultures have also destroyed local biodiversity, source of Non-timber forest produce (NTFPs) and forest foods used by tribals. The CA funds are being used to illegally evict tribals and other forest communities from the Protected Areas such as the Tiger Reserves, National Parks and Wild Life Sanctuaries. Not only that, massive corruption and irregularities have been reported in administration of CA funds by the forest department, with serious charges of ghost plantations, replacement of natural forests with monocultures being reported from across the states. Even the MoTA has earlier raised concerns about violation of tribal rights due to CAMPA.

Therefore the announcement of transferring CA(CAMPA) funds (6000 crores) can only exacerbate the distress situation that tribals are already facing and provides no relief to them. Besides, the CA(CAMPA) fund is an already existing corpus, and use of that fund is legally obligatory. Allotment of money from the CA fund cannot be treated under any circumstances as part of a economic package declared explicitly for addressing the Covid pandemic situation. There are already reports of the forest department carrying out plantation activities during lockdown period, causing additional hardships to the tribal communities. There are also reports of eviction taking place during this time.

Overall, the economic relief package announced by the PM and FM fails utterly to address the economic distress of tribal and other forest communities due to the COVID 19 outbreak and the unplanned lockdown measures.

Earlier, on May 4, a group of civil society organisations, activists, researchers and experts working with tribals and forest dwelling communities submitted a report to the Ministry of Tribal Affairs (MoTA). The report highlights the socio-economic distress situation in tribal areas arising out of Covid19 outbreak and lockdown measures. The report was also submitted to Ministry of Environment, Forest and Climate Change (MoEFCC), Ministry of Rural Development (MoRD), Ministry of Panchayati Raj (MoPR), Ministry of Home Affairs (MoHA), NCST, Prime Minister’s Office and Niti Ayog, and to National Disaster Mitigation Authority. The report clearly highlighted the need to come up with a Covid 19 response package for tribals which included the demand to transfer the CAMPA funds to the Gram Sabhas. Many of these concerns were reiterated by political leaders and experts-Jairam Ramesh, and Shashi Tharoor of Congress, Vijoo Krishnan of All India Kisan Sabha (CPI-M), Jharkhand Mukti Morcha (JMM), Rashtriya Janata Dal (RJD), leading environmentalists and forest rights experts Ashish Kothari, Shankar Gopalakrishnan, Kanchi Kohli, tribal rights activist Hansraj Meena, historian and writer Ramachandra Guha and hundreds of others on May 11 on twitter.

[1] Compensatory afforestation means the afforestation of plantations of an equivalent area of non-forest land or of double the area of degraded notified forest to compensate for the loss of forests diverted for development activities. The user of this diverted forest is required to pay its ‘net present value’ to the forest department for this purpose. On the direction of the Supreme Court, a law has been enacted and rules framed to manage the money collected for afforestation. The contents of this legislation and the manner of its enforcement have, however, led to a severe reduction of the tribals’ access to forest resources, forcible plantation on their village commons, pastures and even on patta land, and the relocation of their settlements from forests, thereby violating their rights in land and forests. It has also led to severely eroding their means of livelihood besides creating a perverse incentive for deforestation. https://journals.sagepub.com/doi/abs/10.1177/0049085718821766