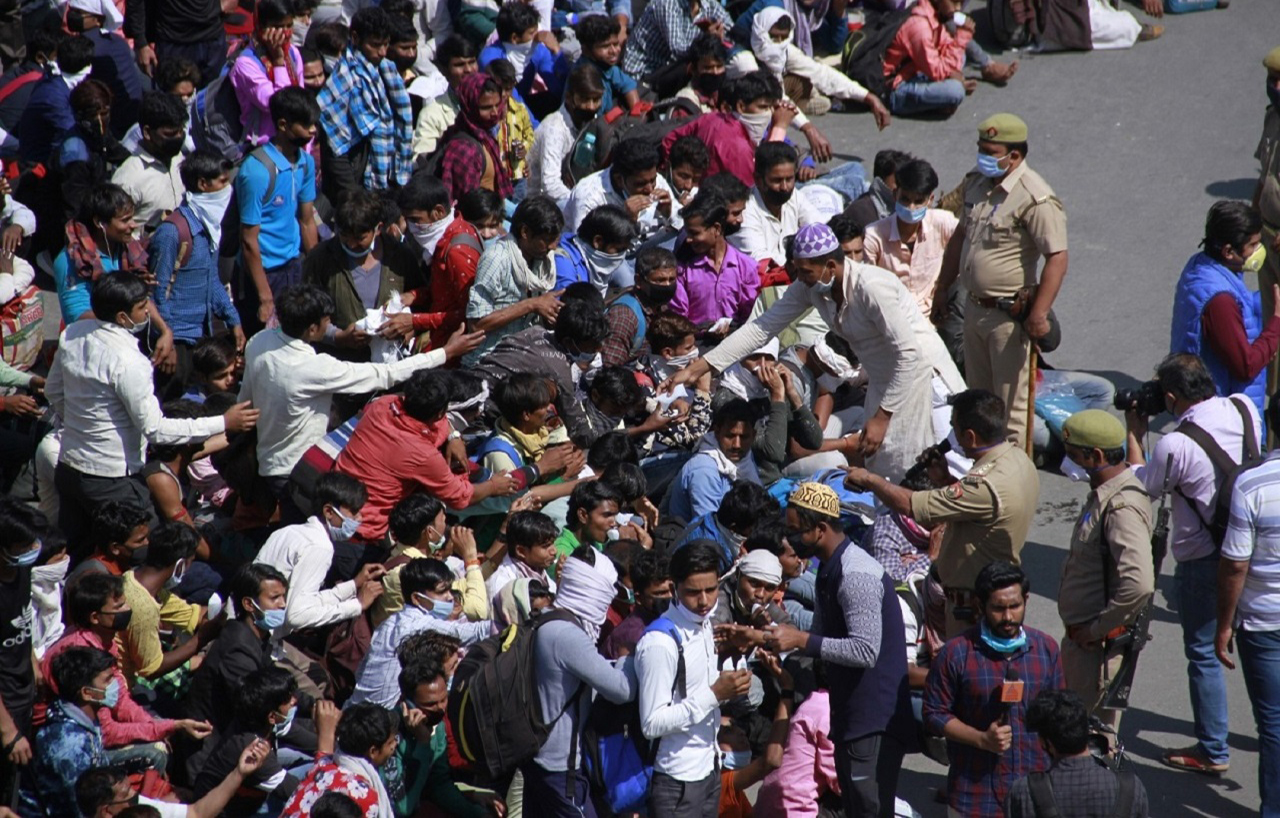 Lockdown and its discontent: mass quarantine and beyond

On Sunday, 3rd May, the Covid-19-triggered lockdown completed forty days in India. We are caught in the cusp of two moments – the completion of the forty days-cycle and the lurching forward of the entire country into another 14 days of lockdown that was recently notified by the Government. This conjuncture calls for close reflection on the model adopted for the disease’s containment, as well as its far-reaching repercussions, writes Maya John.

As history would have it, strategies to separate people with infectious diseases have existed in earlier societies, such that we come across early references to the same even in the Old Testament (in Leviticus, chapter 13). However, the actual term “quarantine” itself is attributed to the period when the plague spread across 14th century Europe in waves, killing an estimated one-third of the continent’s population. As the plague raged, more and more strategies were evolved to separate not just those who reported sick with the disease but also those suspected of carrying the communicable disease. The specific term quarantine can then be traced back to a practice which began in 14th century port cities like Ragusa (modern Dubrovnik, Croatia) wherein travellers/visitors had to spend 30 days (trentino) in a restricted place (originally nearby islands) to see if the symptoms of plague would develop. By the 15th century port cities like Venice, Pisa, Genoa, etc. extended the waiting period from 30 to 40 days. Ships with travellers and cargo from plague-infected ports were subsequently kept at anchor for 40 days before landing. Quarantine,derived from the Italian word quaranta meaning 40 days, henceforth became part of our modern lexicon.

In earlier times, states clearly enforced the quarantine or 40-days strictures on movement and social interaction on the travellers entering a region. Having said this, segregation based on early contagion theories took a unique form in the industrial context wherein in the effort to control outbreaks of infectious diseases in teeming cities the poor were consciously restricted to ‘lower’ quarters of the city and labeled as disease spreaders. The marked segregation in town planning and administration was to an extent driven by the harsh realities of industrial urbanization. Slums, which emerged with industrialization in the western world and in the colonies, were densely populated and extremely unhygienic. Thus, as a number of illnesses ploughed through urban slums where poverty and filth bred easy victims, these poorer quarters were easily projected as the hotbeds of contagion.

In today’s context, it has not been possible to identify the dreaded Covid-19 with the labouring poor or their quarters of the city. From the beginning, the disease has been traced to globe-trotting elites who have returned with the contagion to their respective countries. Such concrete circumstances demanded a model of quarantining that specifically and rigorously targeted these travellers, the majority of whom were either from the ranks of the political elite or from the economically dominant classes. But this is not the logic of quarantine that has prevailed. Rather than targeting globe-trotting travellers, countries like ours have enforced quarantine strictures on their entire populations! A measure of mass quarantine such as this does not target the suspected, likely carriers of the disease. It represents a convenient diversion of attention from the Government’s own lax actions against foreign-returned elites. In the process, it has reduced each citizen into a potential suspected carrier of Covid-19.

The real question of course is what the mass quarantine has meant for the various sections of Indian society? The coupling of Covid-19 epidemic and lock-down has created confusion for some people in terms of which of the two is deadlier. For many this is an unprecedented, exceptional time. But for others this moment is not new but rather a repetition of the similar course of life, with the addition of just another fear. Many are puzzled by how, among all the lethal contagious diseases and illnesses plaguing our country, “Corona” gained prominence.

The “Corona” moment is similar to a situation of a movie-hall where for a transient period of time people together watch the same movie; albeit from differently priced rows. Indian movies generally last longer than their Hollywood counterparts; with their share of songs and love angle, even if the genre is horror. The same movie can elicit different reactions and emotions from the audience. Some might laugh while others cry. Some may cringe while others burst into giggles. Some might enjoy a moment in a perverse manner which in others evokes disgust. When the movie ends, they all disperse, carrying different impacts back with them.

Indeed, the lived experiences of this so-called quarantine have proved drastically different for the upper classes and working masses. The hungry and desperate labouring poor stand in marked contrast to the country’s elites; a majority of whom have been hoarding and enthusiastically buying into the government’s populist campaigns on the ‘necessity’ of the lock-down; importance of ‘social distancing’ [sic]; superficial appreciations for healthcare workers who’ve nevertheless continued to grapple with the acute shortage of resources like personal protective equipment; etc. While the upper classes have been busy ‘working from home’, this luxury has evaded the working masses. The same lock-down has literally meant no work for majority of labouring poor. ‘Home’ has remained an elusive term for a large number of migrant workers who lie stranded in make-shift tenements near their workplaces like construction sites, or have been rendered homeless in the process of being shoved into temporary shelters that were set up to prevent their migration back to native villages.

More recently, the Central government relaxed the lockdown so as to facilitate resumption of work under its Standard Operations Protocol (SOP). The travel ban on workers nevertheless persisted. A measure like this which has pushed workers back to work is an outright admission by the Central and the State governments of their failure to provide succor to trapped migrant workers during the lockdown. More than the interests of stranded workers, it is the interests of employers that have influenced the partial lifting of lockdown. This is why the SOP strategically provides for workers to be screened for Covid-19 symptoms, “skill-mapped” and moved as per the needs of employers’ lobbies, rather than being screened and safely transported home.

In the wake of the lockdown, the pro-employer decisions of the Government have restrained a large number of migrant workers to the cities without any provisions being made for the payment of wages by employers, concrete rent relief, adequate access to nutritious food, access to general healthcare in public hospitals, or hygienic living conditions. Taken together, there is an uncertainty of survival and sustenance in alien, hostile cities, which has made many migrant workers desperate to return to the relative security of their native home. In stark opposition, many among the upper class elites complain of restlessness on being cooped up within their homes, and express a strong desire to step out of their living spaces!

Varied experiences aside, the twin phenomenon of “Corona” and lock-down have also revealed the incompetence of the existing ‘Left’ parties and groups to meet the challenges of this unprecedented moment.1 Indulging in mass charity work and thereby failing to assign primacy to the politics which highlights the workings of the rich/poor divide during the lockdown, the ‘Left’ has simply allowed the guilt conscious upper classes to donate and absolve themselves of their complicity and the need to critique the capitalist socio-economic system. The existing Left’s indulgence in philanthropy dangerously downplays the contradiction between the starving workers who are unable to purchase the plentiful goods in the market and the well-stocked upper classes with large disposable incomes to give to charity. In actual terms, the indulgence in bourgeois philanthropy has been fueling docility within the working masses, as well as perpetuating class-eliding reconciliatory notions within the labouring poor that there are ‘generous’, ‘good’ people within all classes.

The inadequacy and irrelevance of the current interventions by the ‘Left’ necessitates the renewal of revolutionary working-class politics. This is all the more evident, given that both docility of the working masses and their reconciliation with the socio-economic system are precisely the tendencies which sharply contradict the emerging tendency of workers’ self-activity. Lately, several instances of public actions of labour have surfaced in cities like Ahmedabad, Surat, Mumbai, etc. that reflect an engrained, latent class discontent. This discontent or rather class hatred has been brewing among the labouring poor, particularly migrant workers, since the imposition of the lockdown. The resulting persistent protests have pressurized the otherwise resolute Central and State governments to recently arrange for the return of migrant workers to their home states. Nonetheless, the confrontations of migrant labour with the state machinery have been disparate localized struggles, with the existing ‘Left’ failing to give a trans-local form to the spatially disjunct struggles. The ‘Left’ has proved incapable of enhancing the capacity of the working class to resist the combined force of state and capital, and in that way set the agenda for the ‘national-popular’ aspirations of the masses.

At a time when communists introspect on their ill-preparedness, the urgent need for renewal of revolutionary politics and nature of prospective struggles, much can be gleaned from workers’ self-activity and victories in the ensuing lockdown. We are entering another two weeks of lockdown that shall bring with it further hardship and misery for majority of the working masses. Perhaps we can take a small measure of respite in workers’ resolute acts of resistance that shine like a bright light at the end of a dark tunnel.

Maya John, teaches in Delhi University and has been associated with the Left movement for the past two decades.