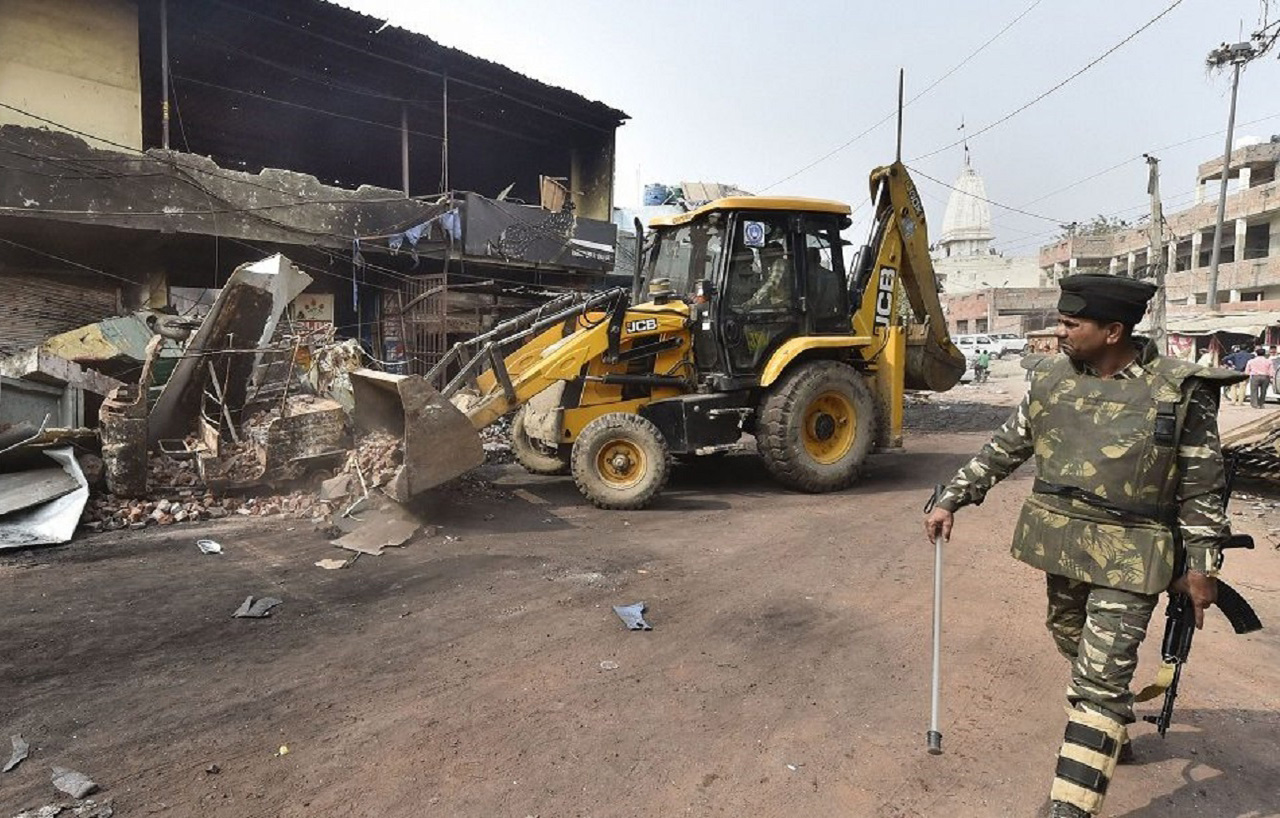 In December 2019, a peoples’ movement against the discriminatory and exclusionary Citizenship Amendment Act (CAA) was picking up steam. During a candlelight demonstration on the streets of Bangalore, a young man, at the end of a round of sloganeering, looked up at the sky and shouted: I no longer feel any fear. His cry was deep and came from within. Others turned around, exchanged glances with him and smiled. No one asked his name. He did not bother to introduce himself. But the moment cemented a sense of solidarity among fellow protesters present there.

The citizens’ statement attached below, against the witch-hunting of the anti-CAA protesters in Delhi, has signatories from multiple walks of life from all over India. It is a testament to the new solidarities that the recent democratic outpouring against the lopsided policies of the ruling government has helped to build, especially the cross-community solidarities that have emerged in the wake of an unprecedented political attack on Indian Muslims.

The anti-CAA protests have been national and local at one and the same time, in keeping with India’s federal nature which successive governments have sought to throttle. People felt that the impact of CAA, in combination with the National Register of Citizens (NRC), would vary from place to place. The nature of Assam’s resistance to the CAA has been different from that of Karnataka. Bengal’s concerns regarding the NRC, given its history of partition, has been different from that of Madhya Pradesh. What has united the protests is a sense that the CAA and NRC together are likely to have a devastating impact on our society, and that they represent the deeply anti-Muslim and sectarian character of the current government. Little other than satisfying the Hindutva vote bank and its corporate allies seem to bother our rulers. The signatories see the recent crackdown during the nationwide lockdown on anti-CAA protesters in Delhi as a manifestation of a lopsided policy regime which is driven by a desire to teach all dissenters, especially those who are part of such protests a tough lesson.

Online statements and petitions have, over the years, become a routine, triggering fears about these replacing street politics. Circumstances are different now though. The Covid-19 lockdown has made public activities on a mass scale impossible at present, forcing activists to make greater use of the online mode. This statement is an effort to build a clear opinion among citizens across India against the ongoing witch-hunt in Delhi, its overall political context and implications. It is also a declaration that the lock down compulsions notwithstanding, citizens are not ready to take state repression sitting down. We will be back on the streets as soon as the circumstances permit. The statement here is not one by eminent citizens as such. It is a statement of solidarity by people young and old involved in movements and struggles across terrains; by people galvanised by the Modi-Shah brand of politics as well as people who never took at face value the liberal myth of a well-functioning democracy prior to the Hindutva takeover.

The full text of the statement signed by more than 300 activists, teachers, researchers and journalists – based in different parts of India is produced below.

CITIZENS’ STATEMENT ON THE DELHI ARRESTS

We, the undersigned citizens, have been watching – with anger and dismay – the ceaseless harassment, interrogation and, in many instances, torture of protesters who participated in the recent sit-ins and agitations against the Citizenship Amendment Act (CAA), 2019. Gulfisha, Khalid Saifi, Ishrat Jahan (both are Muslim community leaders), Safoora Zargar (member of the Jamia Coordination Committee) and Meeran Haider (president of the Rashtriya Janata Dal youth wing’s Delhi unit) have been arrested in the last few weeks. Safoora Zargar and Meeran Haider, both students of Jamia Milia Islamia, alongside Gulfisha, have been slapped with the draconian Unlawful Activities Prevention Act (UAPA). Umar Khalid, former student activist of Jawaharlal Nehru University, is also understood to have been slapped with the UAPA for his role in the protests, although the latest statement of a senior police officer suggests that he is still under investigation.

The arrests have been justified by the police as a necessary step towards identifying the forces behind the anti-Muslim pogrom that unfolded in North East Delhi in the wake of the peaceful and democratic anti-CAA protests. While police investigation into the violence is welcome, it’s character and direction raises concerns and suspicions. There is ample video evidence in the public domain of the Bharatiya Janata Party (BJP) leader Kapil Mishra threatening to take the law into his own hands a few days prior to the outbreak of violence. Despite that, the police seemed intent on investigating the protesters and common Muslim citizens, to the extent of launching a veritable crackdown on them. Muslim activists, their acquaintances and ordinary Muslim citizens of Jamia Nagar, Northeast Delhi and other areas have been particularly targeted, with over 800 Muslims understood to have been picked up by the police. Many of them were victims of the violence and are still reeling under its effects. A range of students’ and women’s groups as well as other democratic organizations that participated in the protests have been harassed and are living in the fear of arrest.

We therefore have reasons to believe that the investigation is being (mis)used to crackdown on political dissent, as we have seen happen time and time again under the present BJP government. Perhaps it is the complexion of the anti-CAA movement in Delhi and elsewhere in India that has made it an object of wrath for the government. In Delhi, the protests were led by Muslim women of Shaheen Bagh, Seelampur, Jaffarabad, Hauz Rani, Khajuri Khas, and other localities, and these drew unprecedented support from students, women’s groups and the working classes. A landmark in the journey of Indian democracy in its own right, the movement has challenged two important claims of the government. First, that it is only the Left-Liberal elites (often referred to as “Libtards” in Twitter wars), who are dissatisfied with the government. Second, notwithstanding the BJP government’s continuous attack on Muslims through the allotment of the Babri Masjid premises for the building of a Hindu temple, tacit endorsements of riots and lynching, unabashed promotion of Islamophobia and the unilateral revocation of Article 370, the government claims to have won Muslim women over to its side by virtue of the controversial Triple Talaq Bill.

These arrests seem to mark the continuation of a disturbing trend: the BJP government’s practice of covering up the violence committed by Hindutva groups by blaming democratic activists and citizens for the same, and its general disregard for the lives of citizens. Gautam Navlakha and Anand Teltumbde have been arrested over the Bhima Koregaon violence of 2018, even as its real perpetrators such as Milind Ekbote (a leader of local Hindutva groups) roam free. Although the self-proclaimed Hindu Raksha Dal took responsibility for the armed assault by masked goons on students and teachers inside the Jawaharlal Nehru University (JNU) campus on 5 January 2020, and some of the attackers identified in the videos belonged to the Hindutva student organisation Akhil Bharatiya Vidyarthi Parishad, Union Minister Ashwini Choubey claimed in its aftermath that the “Leftists” had been beaten up “by their own people”.

The latest arrests in Delhi have come at a time when the country is reeling under a pandemic induced lock down, and at the behest of none other than the Ministry of Home Affairs which controls the Delhi Police. The police have used peoples’ isolation and suspension of public activity to launch its clamp down. Besides defying the rationale behind the lock down, such (mis)use of the pandemic is inhuman: the prisons are unsafe for health reasons and the families of many of the protesters, belonging to the working classes, are in any case struggling to make do under the lock down. Manoeuvres such as these by the Home Ministry betray, yet again, the lopsided policies of the current administration.

Concerned primarily with satisfying its Hindutva vote bank and its big corporate allies, the government has prioritized crushing dissent over addressing the burning questions of universal public health care, securing the livelihoods and workplace rights of workers, and proactively addressing the gaping inequality between the “balcony classes” and the working classes. Throughout the Covid-19 pandemic, the government has done little to meet the needs of the working classes and the poor and instead, with the help of its allies in the media, have misled the public by sensationalizing the unfortunate events at the Tablighi Jamaat gathering. It is worth recalling that the anti-CAA protests were also against yet another misplaced policy: the National Register of Citizens (NRC) which threatens to exclude millions of Muslims from citizenship and entrap Dalits, Adivasis, women and the working classes in endless bureaucratic hassles for the purpose of proving their citizenship.

Identifying with the anti-CAA protests, which had correctly pointed out how the CAA is a distortion of the secular fabric of the Indian constitution, we express our solidarity with the protesters and with the Muslim citizens under attack in Delhi in the aftermath of the agitations and the pogrom. We demand an immediate end to the witch-hunt and urge the Delhi Police to identify the real culprits behind the violence and take action against them. At the same time, the signatories would like to appeal to citizens all over India to proactively organize against the lopsided priorities of the government. We urge all citizens to demand governance that is secular and democratic; one that prioritizes the task of guaranteeing the basic rights of all citizens, especially the working classes, Dalits, Adivasis and others who are on the wrong side of our deeply unequal society.

The pdf file with all the signatures is attached here.