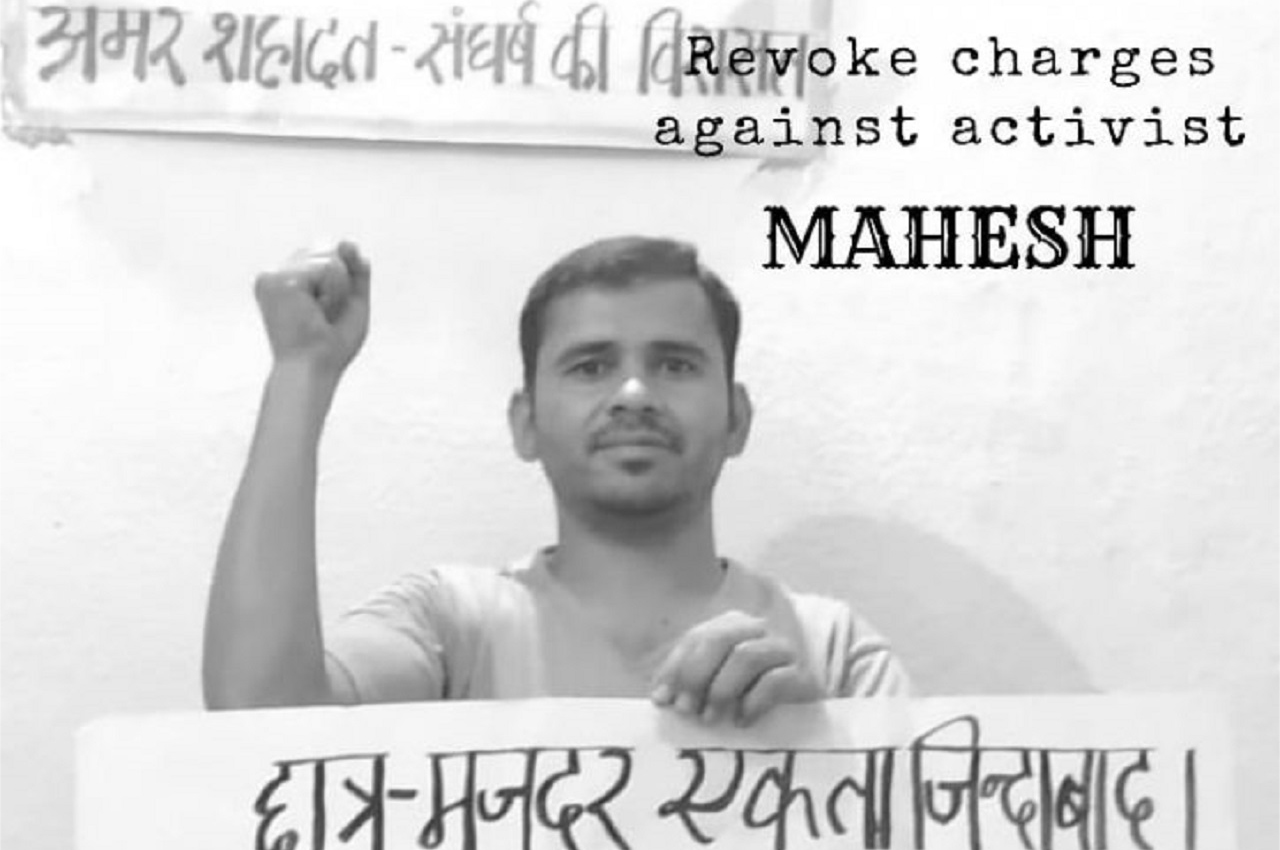 Condemn the Suppression of the Right to Protest of student activist Mahesh!

On April 24th, Mahesh, a student activist in Uttarakhand was charged under several sections of the IPC and the Disaster Management Act 2005 for observing a day long hunger strike inside his home demanding provisions for workers, students and other people bereft of food and supplies due to the COVID-19 induced lockdown. Campaign Against State Repression condemns these charges against Mahesh and calls on all democratic and progressive forces to come together in opposition to the targeting of activists, stands in solidarity with the beleaguered students, women and the working masses and demands immediate and sufficient relief for all during the lockdown.

On April 24th, Comrade Mahesh, a student activist in Uttarakhand and secretary of the Lalkuan Unit of Parivartankami Chatra Sangathan (PACHHAS), had been charged by the Uttarakhand Police for participating in a day-long hunger strike. Mahesh had peacefully observed the strike from inside his home demanding provisions for workers, students and other people bereft of food and supplies due to the COVID-19 induced lockdown. The very next day, he was charged under Sections 188, 269 and 270 of the IPC and Section 51 of the Disaster Management Act 2005 and accused of disobedience to duly promulgated order, of committing acts likely to spread deadly disease and obstruction. This unwarranted police action, attempting to silence a voice raising questions in a peaceful and safe manner, implies that the State today brooks no dissent and cares not an iota for the fundamental right to freedom of expression.

To mark a month of lockdown and to protest against the day by day worsening conditions of workers and students stranded across the country without food or other supplies, members of PACHHAS in numerous locations conducted a hunger strike demanding immediate relief. A social media campaign was deployed to spread the message as well. These demands follow weeks of collecting and distributing rations to areas that are among the worst affected by the unexpected and unplanned lockdown.

A survey of multiple states estimates that during the initial weeks of the lockdown around 90% of workers had not been paid wages by employers nor had they received any rations from the government. As a result, many workers and students are on the brink of starvation. This is in addition to the universal threat of COVID-19 infection. Consequently, while members of the ruling elite and middle classes ensconce themselves at home bolstered by savings, often working from home and maintaining a source of income, the overwhelming majority of the people, workers and peasants face the dual threat of infection and starvation, the latter more imminent than the former. For the working masses, the “Janata Curfew” is clearly a bigger disaster than the COVID-19 pandemic.

The surprise announcement of a country-wide lockdown, shutting down factories and other work places and suspending transport facilities left workers in urban centres, a majority of whom are migrants, without wages to acquire food and other supplies or pay for shelter. Low wages paid to the vast majority of workers in India precludes any possibility of savings. Packed to the brim in cramped accommodation often without running water, adherence to Government issued guidelines for social distancing are impossible to follow for the innumerable workers residing in the slums of Indian cities and towns. Consequently, the days following the imposition of the lockdown witnessed a mass exodus of workers returning home on foot, with many undertaking journeys in excess of a thousand kilometres without food or any other supplies, often with families including children in tow. Even the lucky few who managed to catch a bus home were forced to pay exorbitant prices for tickets as witnessed when lakhs of workers on March 28th thronged the Anand Vihar Interstate Bus Terminal (ISBT) near the Delhi-Uttar Pradesh border.

Rather than sympathise with the plight of these workers whose low-paid work in extremely poor working conditions is essential to the maintenance of urban India’s edifice and highlight their plight, mainstream media has branded the exodus a mass violation of the lockdown and claimed that workers have put the country at risk. The judiciary too has played its part in this vilification campaign with incredulous statements emanating from its upper most echelons that question the need to provide economic assistance in addition to food, essential supplies and shelter. In addition to the attitudes of mainstream media and the judiciary, the contemptuous and brutal treatment of workers facing starvation, highlighted by instances of police brutality and charges foisted on workers congregating at Bandra in Mumbai on April 14th and the many cases of police humiliating workers venturing outside to collect food and other supplies, only reiterates the extreme class bias of all pillars of the Indian State, including the haloed fourth pillar. This class bias contains a caste bias as well, as low-paid, daily wage workers predominantly belong to Adivasi, Dalit and other marginalised castes and communities.

The utter lack of concern for the conditions of workers extends beyond neglect during the lockdown. As part of plans to restart the economy, on April 19th the Ministry of Home Affairs (MHA) issued notifications stating that stranded workers, who are free from COVID-19 infection, may be delegated to appropriate worksites on the basis of skill and capacity while restricting them from returning home. When juxtaposed with the absence of any measures concerning the provision of food, supplies and economic assistance to stranded workers, this is tantamount to the treating workers as nothing more than a part of the production process, and not human beings with material needs. This attitude extends to even those working people who are providing essential services during the lockdown like doctors, nurses and vendors who are forced to perform services without adequate medical and protective gear endangering not only themselves but also the people they serve. Furthermore, as reports emerge that the BJP led Central Government is planning to pass the remaining three anti-worker and anti-trade union Labour Codes as part of the proposed economic stimulus, it is clear that the lockdown is being used to promote its pro-business and anti-worker policies. The Indian State’s antagonistic attitude towards workers has reached such heights that even activists attempting to provide relief and raise concerns of workers face police harassment and are branded “anti-national”.

Similar to conditions of workers is that of the numerous students stranded in university towns across the country. The unexpected nature of the lockdown has denied them the opportunity to return home and as result, they are stuck in cities and towns where they face food shortages. Many suffer severe economic distress as there has been no relaxation on fees and rents while their sources of income and those of their parents are disrupted due to the lockdown. Furthermore, news of universities attempting to conduct classes online have surfaced which are being opposed by both student organisations and teacher organisation as such online courses would not be accessible to all students thereby restricting education to those with means.

The disproportionate impact of the lockdown on women and children is evidenced by the drastic increase in cases of domestic violence registered with the National Commission of Women during the first two weeks. Moreover, women and children face the brunt of a loss of household income which is exacerbated by the inability to draw upon support from the extended family and community networks. In this regard as well, the State seems absolutely unconcerned with no concrete plans or policies being proposed. That none of these factors were considered before imposing the lockdown is indicative of the utter apathy towards the conditions of women and children.

Comparable, if not worse than this attitude towards the working masses, women and students, is the treatment meted out to the Muslim community which has been demonised via the narrative of “Corona Jihad”. The mainstream media’s exclusive focus on the Nizamuddin Markaz, in exclusion of all other religious gatherings that have occurred before and during the lockdown, indicates that there exists a concerted attempt to blame the spread of the COVID-19 pandemic on the Muslim community. Even the Joint Secretary of the Central Health Ministry has participated in the vilification campaign by repeatedly referring to the Tablighi Jamaat in press briefings. The maligning of the Muslim community has reached an intensity that even international agencies have voiced their discomfort. Consequences of such actions have been traumatic for the Muslim community with cases emerging of Muslim essential service providers facing boycott, Muslims being denied medical treatment and suffering segregation in hospitals. Reports have even emerged that police in numerous localities have pressurised mosques to desist from conducting the “azaan” during the month of Ramzaan, despite there being no such order from the government.

A contempt and disregard towards Muslims, students, women and working masses, a large section of whom come from Adivasi, Dalit and other marginalised castes and communities, and active efforts to suppress their rights and deny them a dignified life are integral to Brahmanical Hindutva fascism. These aspects sharply come to the forefront at times of crisis such as the one we face today. At such a time, all democratic and progressive organisations, individuals and forces must combine to condemn and combat each and every instance of state repression mindful of the fact that wanton neglect of those in dire circumstances is also a form of state repression. The charges foisted on Mahesh are indicative of this dual character of state repression, as they are charges made to silence an activist for condemning this wanton neglect of workers and students during the lockdown.

Campaign Against State Repression (CASR) calls on all democratic and progressive organisations and individuals to unitedly condemn the charges against Comrade Mahesh and stand in solidarity with him and others who are similarly targeted by the police. The State is clearly attempting to convert this COVID-19 lockdown into a lockdown on all democratic and political rights. Activists across the country who have dared to speak up for those worst affected are facing a political pathogen in the form of state repression, the cure for which is our courage and unity. CASR demands the dropping of all such charges and cases. Also reiterating the demands raised by numerous activists and organisations and in solidarity with the beleaguered students, women and the working masses, CASR demands immediate and sufficient relief for all during the lockdown.