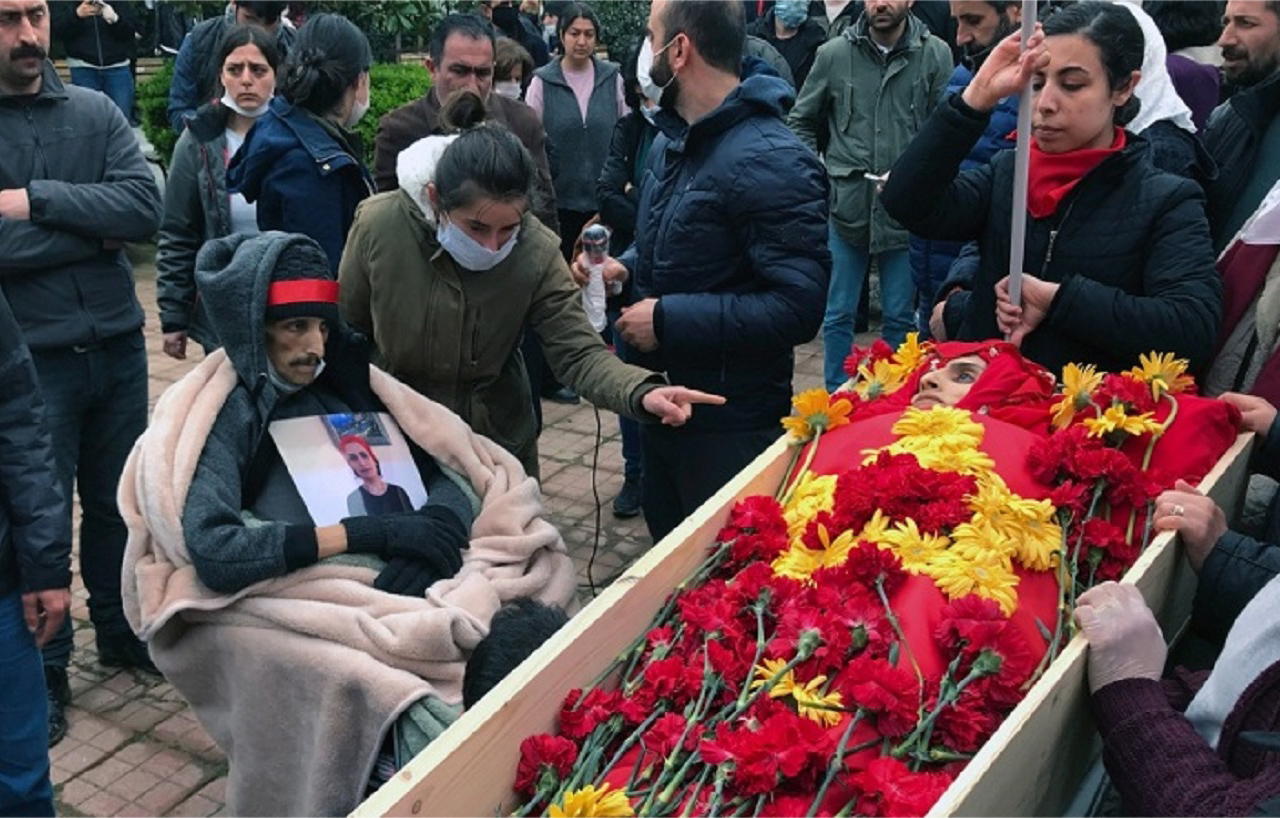 Helin Bölek, Turkish revolutionary musician and Grup Yorum band member, died in the morning of Friday 3 April 2020 after 288 days of being on hunger strike. She was on hunger strike together with fellow Grup Yorum member Ibrahim Gökçek.

Grup Yorum, one of the most popular bands in Turkey, consists of both Turkish and Kurdish members. It was founded in 1985 by a group of progressive students. The band had been at the receiving end of state repression for a long time. The Turkish government accuses Grup Yorum of links to the outlawed Revolutionary People’s Liberation Party-Front, or DHKP/C and the band was banned in 2016. Their offices have been raided repeatedly; their members have been arrested and tortured.

On March 11, the house where Bolek and Gokcek have sat on their hunger strike, was raided by Turkish forces, and they were taken to Umraniye Training and Research Hospital to be force-fed. Both refused. After six days of intense torture, they were released. They continued with their hunger strike, and made it clear that they are fasting until death. 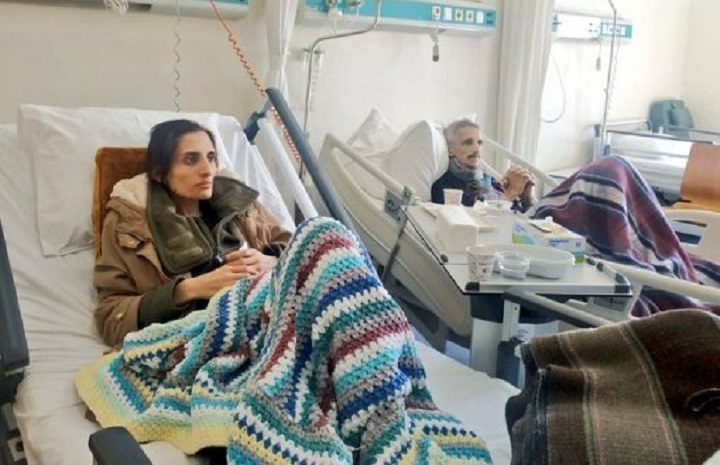 The death fasting Grup Yorum members have the following demands:

* End the police raids against İdil Cultural Center, which is constantly raided, and where the group is conducting its activities

* Remove the ban on the concerts of Grup Yorum, all concerts of which have been banned for almost three years.

Hardly anything is available on the Turkish revolutionary singer Helin Bolek’s personal life on the internet. On the one hand, this is hardly surprising. Revolutionary singers and artists like Bolek do not necessarily make a spectacle out of their own lives. Instead, they let their life’s work speak for themselves. On the other hand, in our contemporary world, where we are all more or less locked into the image we create for ourselves, the lack of information on Bolek’s personal life is indeed striking. Many of us probably would not have even heard anything about Bolek if she hadn’t died on April 3, 2020, after a hunger strike that lasted for 288 days. Fellow Grup Yorum member Ibrahim Gökçek is continuing with the death fast, now for 291 days. 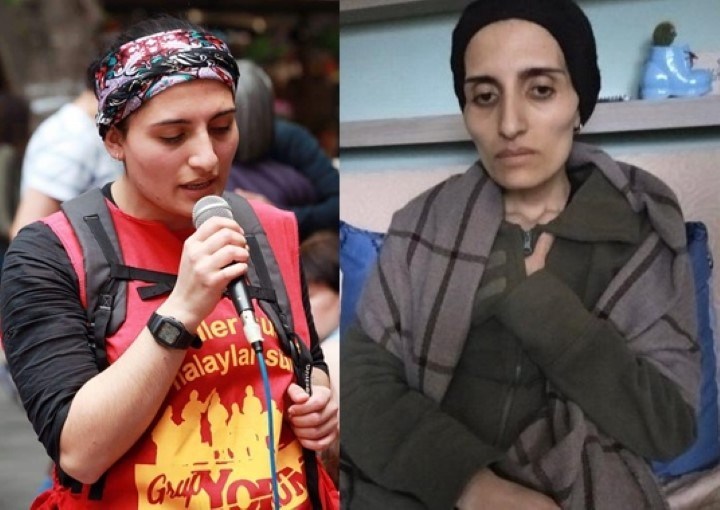 Helin Bölek, before and during her strike. Photo credit: @FreeGrupYorum, Twitter

Bolek’s death exposes the fascist nature of the Turkish state, and also shows how radical art put fear among the rulers as it possesses the potential to influence millions. A fact that comes across this short memoir written by Nilanjan Dutta, who got the opportunity to listen to a Grup Yorum concernt in Turkey in 2013.

I first heard Grup Yorum in 2013 at a park in Istanbul.

The setting was apt for the concert of a people’s choir that not only interprets (‘interpretation’ is one of the meanings of ‘Yorum’, I learned from the locals) the prevailing world order, but, through its songs, also motivates the oppressed for changing it. People were gathering early on and the neighbourhood residents, too, were dropping in, along with a host of activists who had come from other parts of the city to hear their favourite band. I saw some young enthusiasts even coming in a procession chanting slogans, the meaning of which I did not understand but was struck by the rhythm and melody. Quite natural, I thought, for the audience of a musical event.

The venue itself was impressive — an amphitheatre of sorts, with a covered permanent stage supported by an array of white Doric columns semi-circled by open-air galleries for the audience. Big banners were hung at places. Though I could not decipher the meanings of what was written on them, I presumed that they bore the same messages as the artistes were going to deliver through their songs. The largest banner, unfurled across the top of the entire stage, was in English though. It read: “Imperialism will be defeated. The resistance of the people will win.”

There was huge cheering when the curtains parted and the singers and musicians became visible on the stage. Like any other western ensemble, an elaborate instrumental arrangement was laid out in a semi-circle on the rear half of the platform. The lead singer or singers took turns on the microphones or sometimes crooned with cordless mouthpieces as any rock artiste would do.

The difference, however, was palpable in the rendering of the music itself. Language was hardly a barrier. The well-tuned voices and appropriate accompaniments presented a bold and beautiful blend which touched the right chords even in the hearts of listeners like me who could not understand the lyrics. There were, of course, volunteers eager to translate, but it was not always necessary. The electrifying effect that Grup Yorum’s music was having on the local audience was being transmitted to the foreigners too.

Watching the audience, it appeared to me that unlike the other popular musical programmes, they were not only appreciating and applauding the artistes, but, in fact, celebrating the expression of their own inner cravings through Grup Yorum’s music. How could I not be touched by such a radical reciprocal relationship between the performers and the spectators? I could only compare this rousing experience with the mood at the unforgettable revolutionary concerts of Jana Natya Mandali led by Gaddar and Amritsar School of Drama led by the late Gursharan Singh, which I had had the opportunity to attend back in India.

Five years later, we got the news that Grup Yorum was no longer being allowed to sing in public and its artistes were facing terrible repression. Our organisation, the Association for Protection of Democratic Rights (APDR) immediately wrote a letter to the Honorary Consul General of Turkey in Kolkata, expressing concern. It urged the Turkish government to “stop treating artistes as terrorists, lift all cases and release all arrested activists”.

Within a couple of months, we were delighted to hear Grup Yorum performing its first Internet concert on 29 April 2018. A second one followed on 1 July the same year.

Maybe, I was missing some of the voices that I had heard five years ago and the soulful symphony of some of the instrumentalists who had accompanied them. Maybe, they were behind bars this time.

But the music must go on.

Cover Image : Mourners gather around the open coffin of Helin Bolek, during the funeral procession in Istanbul, Friday, April 3, 2020. (Ibrahim Mase/DHA via AP)