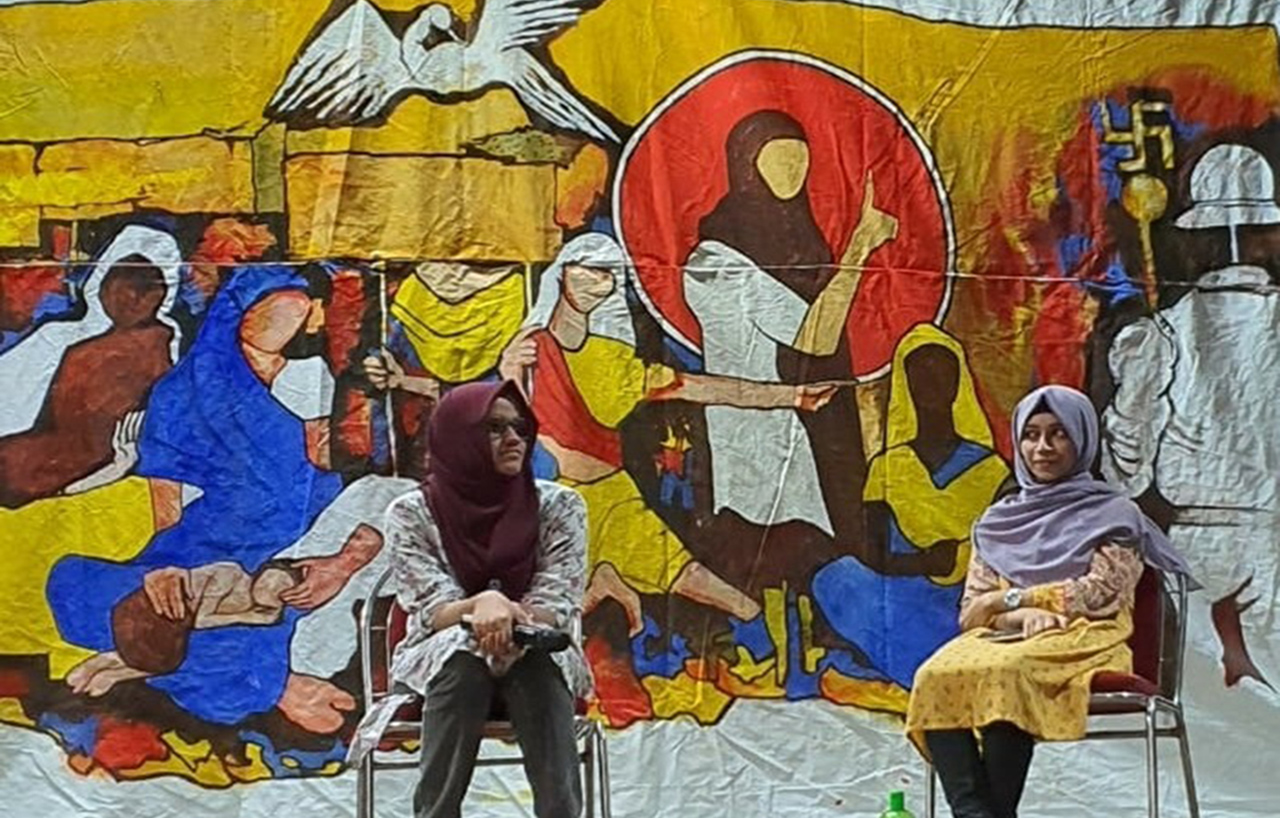 “My Identity is My Pride”— an interaction with Ayesha Renna

Ayesha Renna, the young woman student from Jamia Milia Islamia University, Delhi – who became the face of anti-CAA students’ protests in India was in Kolkata to speak at the People’s Literary Festival organized by Bastar Solidarity Network (Kolkata Chapter) on  29th February. Sudarshana Chakraborty talked to her on behalf of GroundXero about her activism, politics etc.

How do you feel about literally becoming the ‘face’ of anti-CAA student protesters in India?

The thing is like, rather than being the ‘face,’ I’m so happy that I became one instigating point for ladies & women in India for coming out onto the streets, basically from the Muslim community. Whenever and wherever I’m going, they used to come to me personally, and told me that ‘you are the one who instigated or inspired us to come onto the streets.  So when I hear this kind of things, I feel so happy.

Today, during your session, there was discussion on issues related to your Muslim identity. Did you ever feel it’s kind of a baggage or burden to you?

No, no never. I never felt like that. My identity is my pride actually. I personally always felt very proud about my identity and I it has never been a burden to me at all.

Do you ever feel that the structure of the movement in India is to some extent still patriarchal in nature?

See, the movement that is  going through now, it has come out of all the stereotypes, even those the patriarchy has put forward, regarding the Muslim women etc – each and every stereotypical things are being broken and Muslim women are coming out onto the streets right now.

Right now you are ‘the’ Ayesha Renna from Jamia University. Do you feel that you have to establish your separate identity as an individual activist, which is not related to Jamia?

You must be facing a lot of trolling, social media backlashes. How are you handling them?

Actually, I believe, my God has chosen me to do these kinds of things and that is why I’m over here. So at this moment of time, whatever has happened, we have taken things in that way. Because when someone is asserting their identity and they are coming out breaking all the stereotypes, definitely these types of things will be happening. It’s part of the protest and part of the things happening all around. We have taken this in that sense only.

Right now in most of places of protest, wherever I go, I see number of Muslim women is far higher than the number of other women. At the present moment when we are looking at the protest in general, Muslim women are dominating in each & everywhere. So I don’t think there is a point of calling it women’s protests, right now, because Muslim women are more in number. Also I have not noticed any sit-in protests dominated by people from any other religious community in that way, so in the present situation it is being carried forward mainly by the Muslim women and we can call it ‘Muslim’ women’s protest.

There are few allegations coming up that the members of Pinjra Tod and Chandrasekhar Azad instigated the violence in Delhi. These kinds of narrative can even create cracks in the movement. What is your opinion regarding this?

How come Pinjra Tod or Chandrasekhar Azad instigated the violence – that is the very basic question I have. RSS people are coming & creating the violence. All these movements are going on for so long. It is a very well planned and well equipped attack – that’s going on right now. There is no point in blaming Pinjra Tod or Azad for instigating this.  Any crack within the movement is something nobody wants right now, we want to move forward with everyone.

After the recent Delhi violence what should be the future strategy for the protesters – your opinion?

Actually the violence can be easily stopped by the government and the police. But when they are helping the RSS people, there is no trust from us on them, because they are not going to do anything which will stop the violence, rather they will help to instigate the violence. So I think the people have to come onto streets, have to help the protesters, and stop the violence themselves.

We see the students, the ‘Muslim’ women – but where is a strong opposition (political party) taking on this government? What is your opinion about that?

That is something which we have to look for … who will be a strong opposition to this government. Whoever is coming up, we are losing hope in them, because of their certain actions. We are looking to the emergence of a minority politics which includes all the religious communities as well.

Do you have any plan to join electoral politics in near future?