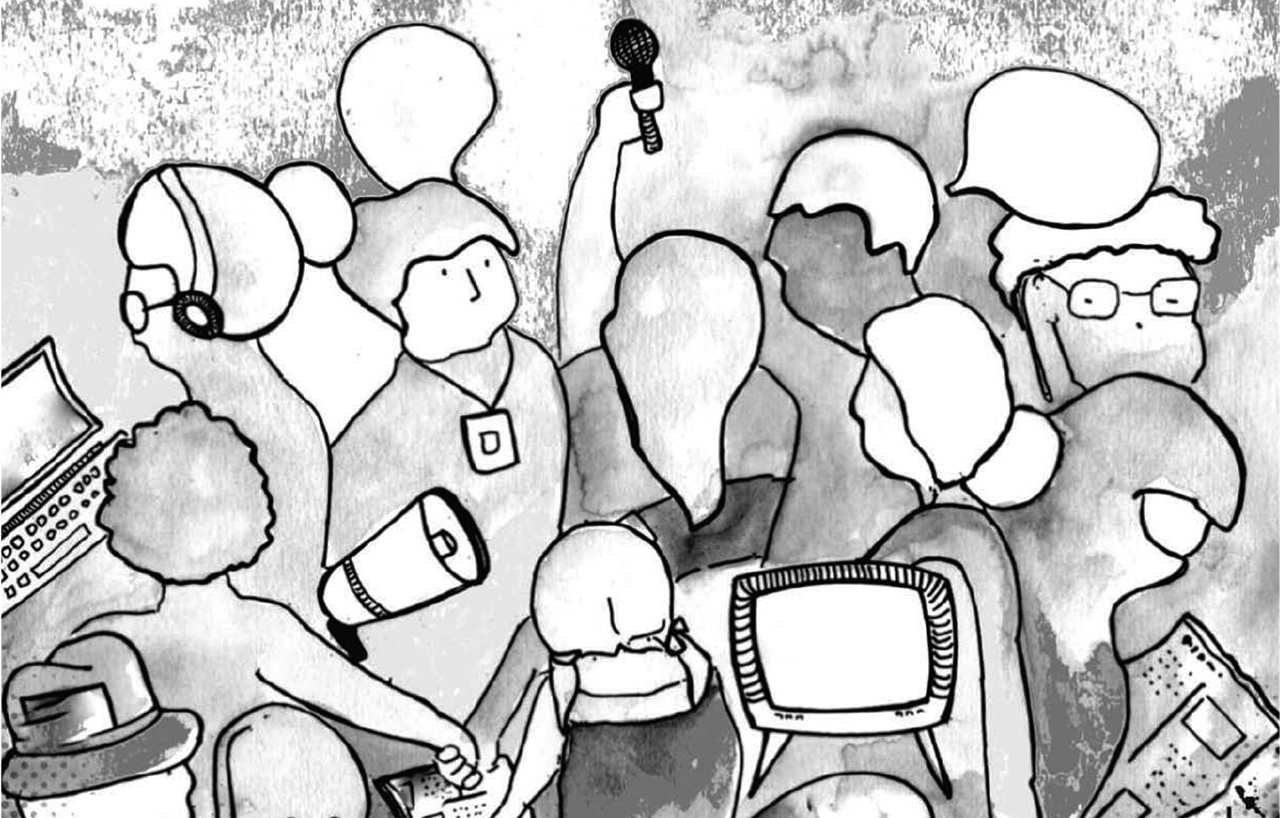 A survey conducted by the Network of Women in Media, India (NWMI), and Gender at Work, found that over a third of all respondents working in media houses have experienced sexual harassment at their workplaces, and a large percentage of them had never attended a training workshop on sexual harassment, as required by the law.

“Before you [joined], there were no sexy women in my team.”

“A colleague stared at my breasts during every conversation.”

“The incident happened at a party which was organized for trainees, for the successful completion of our training period. I went to the loo in between the party. Yes, I was drunk a little. From there, one of the seniors from the management section tried to pull me close and kiss me. I tried to resist but he continued to force me… No one did anything.”

“A colleague would seemingly accidentally, but on purpose brush up against me while walking down a corridor.”

“I resented having to tolerate sexist remarks and unwanted ogling from a couple of senior male colleagues which made me very uncomfortable.”

“When I was an intern, 14 years back, my immediate boss fondled me and forced himself on me in the department room.”

“A colleague assaulted me and I could do nothing about it.”

“The then bureau chief of the media house I worked in asked me to get sexually involved with him. As I refused, he treated me badly and threatened to not confirm my contract renewal. But I continued to resist. He didn’t renew my contract.”

“I was chronically harassed, which eventually culminated in my leaving the job and slipping into chronic depression.

(All the above verbatim quotes have been extracted from survey responses of women working in media houses across the country.)

On the eve of International Working Women’s Day, the Network of Women in Media, India (NWMI), and Gender at Work released a survey report. The report, titled ‘Creating Safe Workplaces: Prevention and Redressal of Sexual Harassment in Media Houses in India’, is based on an online survey conducted to assess whether and how effectively media houses across India are responding to the issue of sexual harassment at the workplace.

The survey had 456 participants among media women – cis and trans – including journalists, journalism educators, trainers, and researchers. Most of the respondents were based in metropolitan centres such as Bengaluru, Chennai, Delhi NCR, Kolkata, Hyderabad and Pune. The respondents are currently or have been affiliated with media outlets such as The Hindu, The Indian Express, Business Standard, Hindustan Times, The Times of India, Deccan Herald, BBC India, Economic Times, The Telegraph, The Tribune and DNA, among other English newspapers. Hindi and regional language media outlets such as Dainik Jagran, Dainik Bhaskar, Sahara One and Madhyamam are also represented in the data set. Women from digital news outlets like Scroll.in, The Wire, The News Minute, and ‘alternative’ digital platforms like Youth Ki Awaaz took the survey as well.

The report examines evidence gathered from the survey and seeks to identify key challenges and trends and make recommendations for effective redressal mechanisms for media women.

Key Findings of the survey

The data from the survey suggests, there are higher incidents of sexual harassment in organisations which do not have any reporting mechanisms in place or have inadequate advocacy around those mechanisms and policies. The main findings of the survey are listed below:

The verbatim quotes of the respondents in the survey, reflects the types of harassment experienced by them. The harassment include sexist comments, unwelcome sexual jokes, embarrassing gestures or body language, attempts to establish unwanted romantic and/or sexual relationships, and pestering for dates. The promise of rewards for compliance accompanied by threats of mistreatment following a refusal to engage in sexual behaviour was also reported. Besides, unwanted touching, fondling, sexual assault and rape were documented.

“The results of the survey underscore the need to step up awareness-raising and other preventive measures to bring about a change in the work culture in media houses,” said Laxmi Murthy, one of the authors of the report. “There is not enough awareness even among women who work in the media about redressal mechanisms for sexual harassment. Further, there’s a lack of faith in ICs, which media houses need to address.”

Based on the survey, as well as previous, extensive experience, the authors of the report made the following recommendations concerning awareness, prevention and redressal of sexual harassment at the workplace.

Despite the enactment of the Sexual Harassment of Women at Workplace (Prevention, Prohibition and Redressal) Act, 2013, built on the Vishaka Guidelines laid down by the Supreme Court of India in 1997, the media industry in India continues to witness rampant sexual harassment.

When the #Metoo wave hit India, the media called out sexual harassment in various spheres but they evidently failed to look within to check on the internal state of affairs.

The authors of the survey report suggest that long term work must go into creating safe, inclusive, diverse and non-discriminatory workplaces. Several of these measures are mandated by the SH Act, 2013, and media houses should urgently operationalise those measures. As Aayushi Aggarwal, one of the author’s of the report said,

“While calling out sexual harassment in other spheres, as they should, the media industry must also look within and set its own house in order. The time for safer media workplaces has come.”

NWMI is a pan-India network which aims to provide an informal forum for women in media professions to share information and resources, exchange ideas, promote media awareness and ethics, and work for gender equality and justice within the media and society.

Gender at Work is an international feminist collaborative of gender experts, and was founded in 2001 to focus specifically on bridging theory and practice, integrating insights from organisational studies, gender and development and feminist political analyses.

Art work courtesy the cover of the survey report.