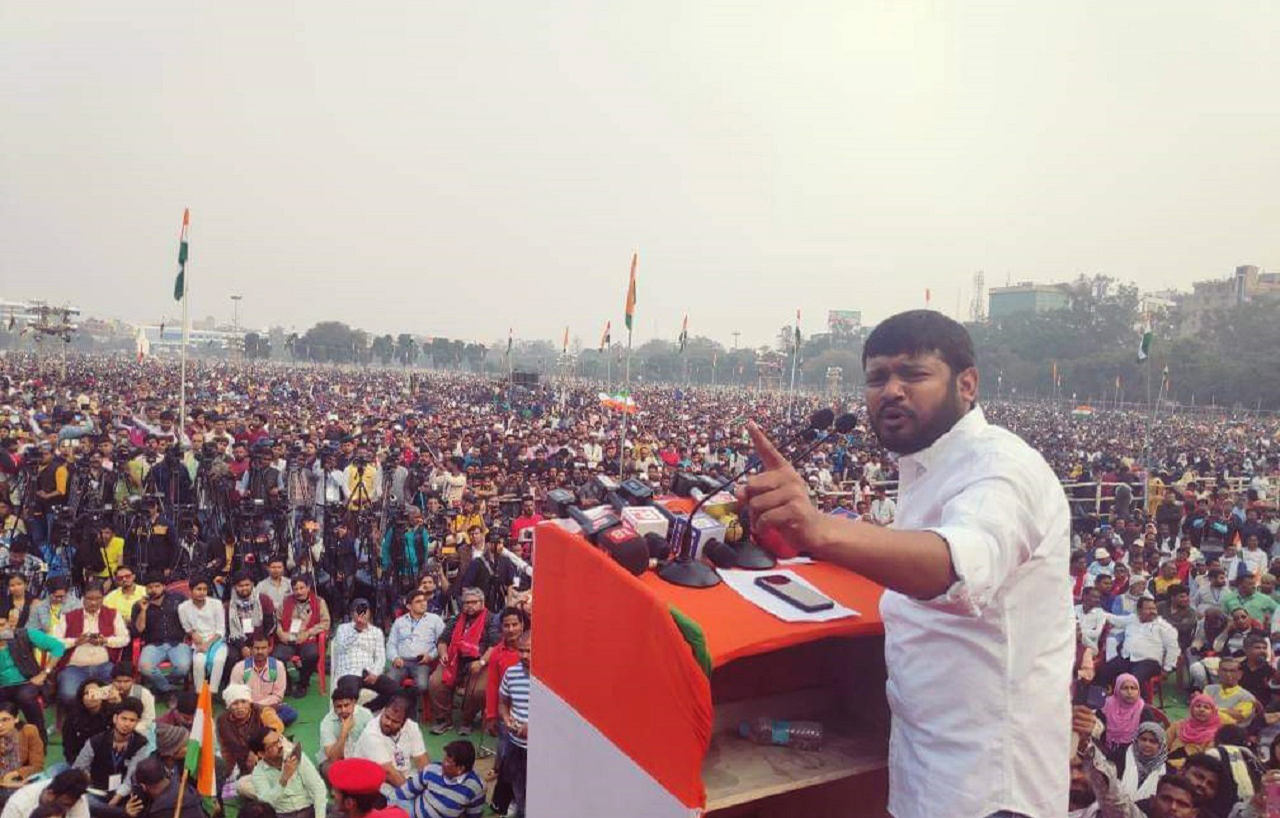 The anti-CAA/NPR/NRC movement in Bihar has started impacting political developments in the state ahead of forthcoming assembly elections scheduled to be held later this year. Anish Ankur writes from Patna.

The anti-CAA/NPR/NRC movement in Bihar has started impacting political developments in the state ahead of assembly elections scheduled to be held in the month of October or November this year. In a stunning political move, the ruling National Democratic Alliance (NDA) government has passed a unanimous resolution against the implementation of the NRC in the state assembly. The resolution insisted that work for the National Population Register (NPR) should be done only by following the 2010 questionnaire, without the additional questions that have been added requiring the date and place of one’s parent’s birth.

For the first time, Chief Minister Nitish Kumar has joined hands with his bête noire Tejashwi Yadav to get the resolution against the NPR/NRC passed unanimously in the state assembly. But in a most unexpected development, the Bihar state BJP led by Deputy CM Sushil Kumar Modi supported the resolution. The passage of the resolution in NDA-ruled Bihar has caught political observers by surprise.

The timing of the resolution is also significant. It was passed on 25 February, just two days prior to the anti-CAA/NPR/NRC rally scheduled in Patna by the Joint Forum. In fact, on the very same day, a huge rally was taken out by CPI-ML (Liberation) demanding an assembly resolution against the CAA/NPR/NRC.

A lot of analysis is coming out on the question of what compelled Nitish Kumar to adopt this anti-NPR/NRC line and why the state BJP supported him. Is it Nitish Kumar’s bargaining tactic before the forthcoming assembly elections? Is support for the resolution by the state BJP an expression of internal bickering, and does it signal the development of a dissenting centre within the party to counter the Modi-Shah duo’s absolute control?

A lot of people feel that it is the anti-CAA/NRC mass movement by left forces and the successful campaign across the state by Kanhaiya Kumar that has led to the coming together of the JD(U), RJD, and BJP to pass the resolution. Political analyst Satyendra Yadav pointed out this important factor. According to him, this is a direct fall-out of the pressure generated by the anti-CAA/NPR/NRC agitations which have been going on for the last two months and which have gathered momentum after the CPI leader and former JNUSU president Kanahiya Kumar started his Yatra, covering all the thirty eight districts of Bihar. The overwhelming and enthusiastic response to his campaign was unprecedented and it perhaps forced the RJD, JD(U), and BJP to come together to counter the anti-CAA/NRC atmosphere created by the Yatra.

Led by Kanhaiya Kumar and Shakeel Ahmad Khan (a Congress MLA from Kadwa in Katihar), the Jan Man Gan Yatra was initiated under the banner of ‘CAA/NPR/NRC Virodhi Sanghrash Morcha’, a joint forum of more than a hundred organisations working against the CAA/NPR/NRC. The campaign was started from Motihari, on 30th January, Mahatma Gandhi martyrdom day. On the very first day, police intervened and tried to prevent the Yatra by detaining leaders and cancelling permissions to hold public meetings in Motihari and Bettiah, which is also the home district of BJP state president Sanjay Jaiswal. But according to some sources, the direct intervention of Nitish Kumar allowed the ‘Jan Gan Man Yatra’ to resume its journey across the state. Everywhere it went, this Yatra led by Kanhaiya Kumar attracted huge crowds, particularly Muslims. At the local level this Yatra, gradually became the rallying point of all anti-BJP forces. This alerted not only the BJP but also mainstream secular parties like RJD. Rightwing elements started to disturb the Yatra at several places — Supal, Madhepura, Jamui, Ara, Chhapra, Imamganj, Bhabhua, and Lakhisrai — by waving black flags, throwing shoes, pelting stones, etc. A number of campaign vehicles were damaged and the attacks became violent when the convoy of Kanhaiya Kumar was en route to Buxar and Ara. Kanhaiya Kumar was attacked by right-wing forces at Bibiganj (Ara) and he narrowly escaped unhurt.

After a month long campaign, the Yatra culminated at the historic Gandhi Maidan in Patna, on 27th February, where a massive public meeting was held. It was addressed by eminent personalities like social activist Medha Patekar, Tushar Gandhi (the great-grandson of Mahatma Gandhi), and Kannan Gopinathan, the ex-IAS officer who quit his job to protest the scrapping of Article 370.

The state administration created a lot of hurdles during the entire campaign period. Even the original date of the Patna rally was changed. The rally was planned for 29 February, but administrative pressures forced the organisers to change the date to 27 February. As Kanhaiya Kumar said in his speech at the Patna rally,

“Our permission got cancelled by local administration and shifting of the venue was done in the last hour, but every where people supported us. At one place, a farmer even cleared his standing crop so that our meeting can be held there.”

Journalist Santosh Singh of Kashish News, who covered almost the entire campaign, described how the administration and the mainstream parties tried to disrupt the campaign. He said,

“Most of the bus owners of Bihar refused to ferry people from remote areas for the Kanhaiya rally in Patna, even small vehicle owners were adamant to go to Patna on 27 February. No tent house from Patna was ready to work in Gandhi Maidan on that day. Therefore a tent house from Samastipur (85 km from Patna) was arranged in the last hours. Even hotels near Gandhi Maidan refused to rent rooms for the guests who came to attend the rally. Some Delhi based RJD leaders tried to persuade the minority community leaders to motivate their community members not to attend the 27 February rally.”

Initially, minorities comprised the major chunk of the gatherings during the Yatra but slowly, other sections of society also started to join in. Social activist Ghalib, who was part of the Yatra said,

“In north Bihar minority-majority participation ratio was 70:30 but as soon as we crossed Ganga and entered into south Bihar this ratio got inverted to 70:30 i.e minorities were outnumbered by the majority community. People basically came to hear Kanhaiya Kumar. He linked the issue of CAA/NPR/NRC to livelihood issues and communicated in a very simple and effective way. Even his political adversaries came to listen to him. This Yatra was able to create a counter narrative to [the] BJP at the ground level and it was no mean an achievement [sic].”

Despite all odds, the “CAA/NPR/NRC Virodhi Sanghrash Morcha” managed to complete the Yatra. All the secular parties were broadly in agreement with this anti-CAA/NPR/NRC campaign but internally this Joint Forum made them a little uncomfortable. As one of the prominent faces of the Yatra, Shakeel Ahmad Khan said,

“Left parties in particular wholeheartedly supported our campaign. Everywhere, left activists mobilized people to attend the rallies and played an important role in the campaign. Given the serious threat on our Yatra, they also took care of our security. If we take the case of Congress, the Congressmen were present but their response was cold. Although, at many places, local Congress leaders participated but they did not mobilise people like left cadres did. If we take RJD, the biggest secular force in Bihar, I can simply say they boycotted our month long campaign.”

In spite of all these problems, people gathered in large numbers. Interestingly, on the 27 February rally at Gandhi Maidan, all secular parties in Bihar participated except the RJD. It seems RJD leader Tejashwi Yadav has still not been able to accept the rise of Kanhaiya Kumar in state politics. During the last parliamentary elections, the RJD had not supported Kanhaiya’s candidature in Begusarai. Many political pundits have started saying that Tejashwi Yadav’s insecurity has led to such a situation where an alliance among secular parties is becoming difficult. To counter the ‘Jan Man Gan Yatra’, Tejashwi Yadav has started the Berojgari Hatao Yatra (Remove Unemployment Journey), but it is not getting the same kind of response when compared to Kanahaiya’s Yatra. Same was the fate of the ruling party JD(U) workers conference on March 1 at Gandhi Maidan. It did not evoke an adequate response and many considered it a flop in terms of mobilisation.

Meanwhile, the Delhi police have been granted permission to prosecute Kanhaiya Kumar in a case relating to the alleged chanting of anti-India slogans on 9 February, 2016 at JNU. All these developments point to a new political scenario in Bihar, as Dr. Ankit, a young social activist put it,

“On the one hand traditional secular political parties like JD(U) and RJD are losing grip among the masses, while on the other, new alternative has not yet emerged particularly in electoral arena. But if we take into account the enthusiastic response among all sections of society during the Jan Gan Man Yatra led by Kanahiaya Kumar, a deep dissatisfaction among the masses can be clearly felt. If this is channelized in proper direction then it can be a potent political force to counter BJP in the upcoming assembly elections.”

The passage of a unanimous resolution by the Bihar assembly has certainly raised the political heat in Bihar. Closed door meetings and back channel negotiations have started. Whatever be the outcome of these permutations and combinations, one thing is certain: all the political parties in Bihar will have to address the concerns raised by the anti-CAA/NRC/NPR movement spearheaded by Kanhaiya Kumar.

“For many decades Bihar politics is centred mostly around Nitish Kumar, Lalu Prasad and Sushil Modi. All the three never allowed any space for a fourth person. Now a fourth person has started knocking [on] the door in the form of Kanahaiya Kumar.”

By attacking his rallies and now prosecuting him in a sedition case, the BJP has given enough signals that his political journey in Bihar is not going to be smooth and easy.