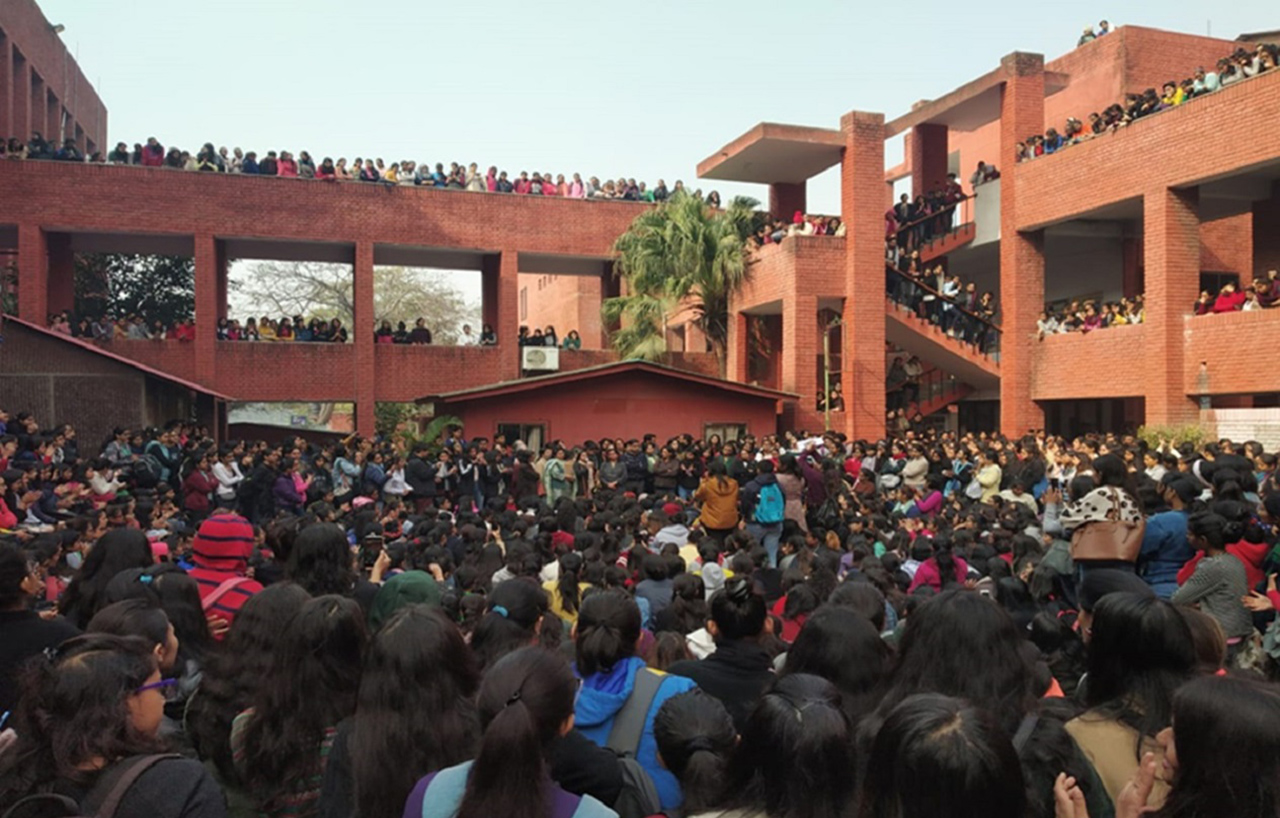 What went down at Gargi College, and why it is important…

On 6th February, a group of men barged inside the premises of Gargi College, a women’s college in Delhi, shouting Jai Shri Ram. Many of the students alleged that they have been molested and harassed by these men. However, what stood out was not this assault on the idea of security within the premises of a women’s college itself, but the massive mobilization that the women students in the college undertook during the days that followed. Shlagha Borah writes.

In my first year at LSR (Lady Shri Ram College for Women), some random men followed a group of my friends from college to their PG. Even after they went inside their rooms, these men continued to lurk around, staring into their windows and making inappropriate gestures. They were only gone after the security guard chased them away.

Women’s colleges have always been considered safe spaces, and I, being from one myself, can vouch for the same. When one is within its premises, it seems like toxic masculinity ceases to exist. But time and again, there have been violations of these safe spaces, leaving students in shock, fear, and disgust.

On 6th February, 2020, during Gargi College’s annual fest Reverie, a group of intoxicated men entered the campus, harassed and groped students, and reportedly even masturbated at them. An eye-witness says,

Students have reported that these men were allowed in after the entry was supposed to be closed. Further, they did not carry valid college IDs, a prerequisite to attending the fest. They also complained that they felt suffocated, unsafe, and were traumatised as these men came closer to them, stamping on their feet, touching them and passing vulgar comments.

The students of Gargi are enraged, but also disappointed with the administration’s apathy towards this grave incident. In 2019, a similar influx of men into the fest had occurred, after which an official complaint was filed with the internal complaint cell (ICC). Soon after, it was dismissed by the ICC as a mere security issue and not as a sexual harassment complaint. This year, too, when the students approached the principal of Gargi College to inform her of what was happening on the ground, she passed insensitive remarks and said that “Students shouldn’t come to fests if they feel unsafe”.

The students have been on a strike and, in a general body meeting held with the teachers and the principal, they held debates and demanded answers to their questions. Their demands included  a written apology from the Principal, the formulation of a Fact Finding Committee (FFC) that would look into why and how security was breached during the fest, and a copy of the college budget with special emphasis on funds allocated to security. The FFC solicited testimonies from all the students who had faced any sort of sexual, physical, or mental harassment and were given a safe space to come forward.

In a win for them, the police have started investigating the case and have set up base in the college itself. The protests still continue as the findings of the FFC were found to be inconclusive, and the administration hasn’t yet taken full responsibility for the mishappenings. However, as disheartening as the fest was, the protest that followed brought a sense of solidarity and empowerment among the students. “Mass mobilisation was one of the most effective ways to draw attention to our concerns. Students boycotted classes, shouted slogans and challenged the tokenism within the institution and status quo in their own way”, says Avni, a third-year student.

Vani, a first year student, shared with us her thoughts on the ingress:

“The fact that enrages me the most is that the audacity these men had, barging into our own home, and daring to make us feel unsafe. We talk about how “the future is female” but instances like these make us feel weak in the knees and have a tremendous impact on our mental health, but it should be remembered that throughout history, women have been subjugated, and they have risen again and again”.

It is extremely important to remember that the inception of women’s only colleges bespeaks of a long and complex history of gender relations in India. On one hand, they embody a long history of opening up educational spaces for women, which have proved to be extremely crucial in empowering women. On the other hand, especially in more recent history, they have also come to represent a sexual anxiety, a patriarchal desire to “protect” women from “unsafe” heterosexual contacts and interactions.

In addition to bringing in fruitful results from the administration, the strike, internally, was a big morale booster for anyone who participated in it. Riya spoke to us about how the strike brought students together:

“Seeing these incredible women sitting all-day long for a united cause was exhilarating. Our seniors led a massive, symbolic movement to reclaim our safe space. The western music society Euphony and the street play society Kshitij also performed to further the mission of DISSENT THROUGH ART. An open mic was held. The dramatics society upstage performed. We made banners together, raised opinions, held debates and ranted. All of this definitely led to huge progress, even the mass mobilization through entire social media helped in lifting our spirits. We felt hopeful, empowered”.

Students also said that female friendships, especially in times of distress, have played a prominent part in this movement.

Most students have refrained from drawing a political association to the detrimental incident, and have expressed that no matter which political party, religion or social sector they belonged to, these men encroached upon their space and that remains the most important matter at hand. Gargi continues to fight against authority, and we hope dissent paves its way into making Gargi a safe space again.