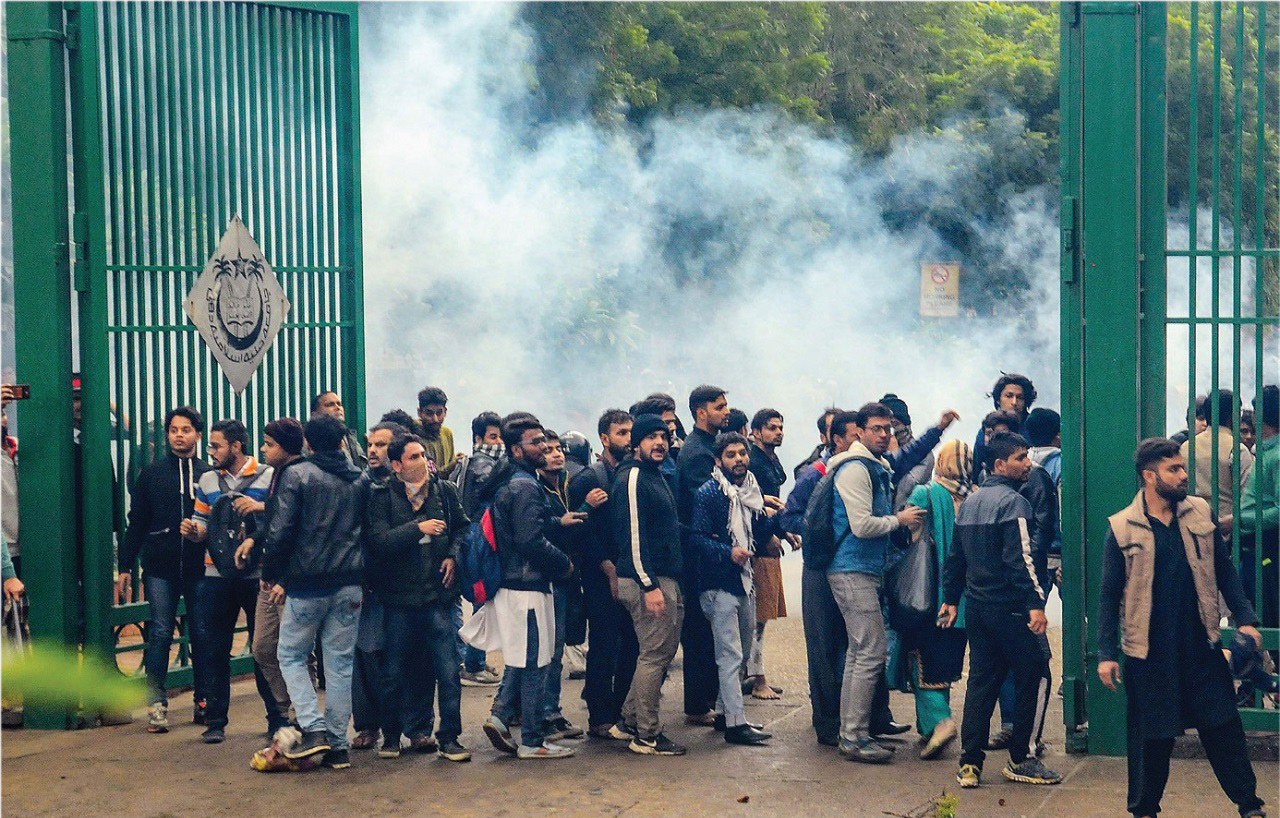 15 December : A tale Of Tragedy Within The University

It has now been more than two months since the brutal police action inside the campus of Jamia Millia Islamia (JMI), a central university in New Delhi on 15th December, 2019. When Muslim neighborhoods in Delhi are being attacked by police backed riotous Hindutva mobs, two research scholars from Jamia, Ruhail Andrabi and Chand Mahal Ruby recall the aftermath of that fateful night.

A nation that silences dissent turns into a monarchy, and a university that tries to bury truth under the debris of radical ideology becomes a prison. It has now been more than two months since the brutal police action inside the campus of Jamia Millia Islamia (JMI), a central university in New Delhi on 15th December 2019. The library building, including glass, doors, benches, chairs, railings, lights, etc. were heavily damaged, and the estimated cost of property damage was approximately INR 2,66,16,390. The same has been communicated by the University to the Ministry of Human Resource Development (MHRD). This amount includes the damage to 25 CCTV cameras by police personnel worth INR 4.75 lakhs.

Despite the damage incurred as a result of the police action and caused by police officers, clear evidence for which has now surfaced with the release of CCTV footage, no action had been taken against the police for their brutal treatment of students, and no judicial inquiry has been set up to look into the matter. The interest of the judiciary is, however, quite clear: the Delhi High Court first postponed hearing the matter to 4 February 2020 (from its original date of 19 December, 2019), and now it has further delayed the hearing to 29 April 2020.

A lot has happened since the 15th of December, 2019. The university has been branded a den of anti-nationals in the public imagination.. We have witnessed since then a wide variety of horrifying events: students being beaten by jawans of the CRPF, in which an LLM student lost his eye; a Kashmiri student being shot in his hand while the Delhi police watched on complacently; and finally, a Kashmiri research scholar being labelled as a ‘stone pelter’ by major media houses during the police action on the library at Jamia. The scholar in question was holding his purse, a fact which was later revealed by AltNews.  The media showing its viewers the face of the scholar with special focus on his hand reveals a twisted narrative that is transparently nothing but deliberate attempt to portray the students of a Muslim-dominated university as violent miscreants and rioters.  Further, the near-uniform claim made by all major new channels including NDTV and Quint that the wallet was a stone not only reveals how the state is controlling media houses through its strategies, but also how Islamophobia is being blatantly promoted as a result of irresponsible reporting. Drawing on the work of Noam Chomsky and Edward Herman,  Manufacturing Consent, the state is framing its own stories and controlling the media to spread its own propaganda and to strengthen its position. It is helpful now to recall the words of Malcolm X, who warned that if you’re not careful, the newspapers will have you hating the people who are being oppressed, and loving the people who are doing the oppressing.

As research scholars, the most devastating form of violence was the attack on the central library, which has now been closed for around two months. Since then, it has been a story of life in exile for research scholars who are struggling to find a space to study, and think critically.

Crossing the old reading room, it gives one goosebumps to see the broken glass on the floor, and the toppled chairs, and the books . The notebooks are drenched in blood; the stains of blood on the walls are reminders that we have survived another battle in the era of fascism. What remains of the library now resembles a camp at Auschwitz, and to recall the incidents we witnessed is to recall being looked down upon as an animal, and to recall being beaten like a prisoner. This incident raises an interesting question: why is a research scholar who spends nearly 16 hours a day in the library termed as the anti-national and the guy who shoots at them is hailed as a patriotic fellow? The students begged the CRPF jawans with folded hands for mercy, and they were forced to walk out with their hands held up all the way out of the campus as if they were criminals, to the sound of communal slurs uttered by the jawans, as proved by the CCTV footages, photographs and the narratives of the students.

The central library, the reading rooms, the reference section, and the research section was a sanctuary for many students and budding scholars engaged in a variety of disciplines from psychology to theoretical physics. It was a place to think, to delve into ideas of metaphysics and to ponder different philosophical traditions spanning western thought to the philosophy of the East. When our heads could take no more and we were confused, we used to take our debates and discussions to tea. Now, drinking tea is not the same anymore. The brewing of ideas now leaves a bitter aftertaste of reality on our tongues.

The closing down of the central library has affected numerous students, mostly importantly those who are embarking on the journey of research. The thinking mind and the protesting mind are in sync against the repression of the state, be it the students in the protest against the Citizenship Amendment Act (CAA), or the students talking or writing about it and the violence, or students sitting inside classrooms or exam halls. The absence of the library has been felt so severely that many students sit at the protest site and read books under the open sky. The library which used to be closed for only a few days in a year has now been closed for more than two months. This is a matter of shame for a democratic country in the 21st century. A central library in the capital city is now closed. It is not that Jamia does not have departmental libraries. They are open to students. However, the central library provides a space for interdisciplinary and transdisciplinary interactions and dialogue. The library was a space shared by a variety of students. Not only of different disciplines, and courses, but also different types of learners, from coffee lovers to tea lovers to discussants inside the library to those are demanding silence. It has all come to a standstill. Each portion of the library held its own specific significance from the ever-crowded reading rooms to the silent and calm research section where it was hard to grab a chair or find a plug point, to the women’s reading room, where women could be seen both studying and offering prayers, gave a space to young Muslim women to step into the world of education and intellect, without losing their identities as Muslims.”

Those who were miraculously not present on that fateful Sunday are also affected by the trauma. Re-entry into the library would be a battle within the University for many irrespective of our presence or absence on the 15th of December, since everyone’s soul was stuck there praying for their friends and Jamia mates. Whether the ghosts of what happened will haunt us even after the library is rebuilt and refurbished is still a mystery. It will be known only after the library reopens. The memory of the events cannot be ever erased or forgotten. The attacks inside the library are like attacks on the young minds, as if asking them “How dare you?” Unlike the usual protocol where during a lathi charge the lathi is supposed to hit the limbs to stop movement, the heads and hands were hit, as if punishing us for daring to think and write.

A form of the state that is not easily visible and that is beyond the myth of the state being a protector of human rights, but instead capable of perpetrating violence is visible in the videos, with even female students being hit by battens by male jawans. Now that several videos have surfaced, the depiction of state brutality and clear violation of human rights is crystal clear to others as well. It reminds us of James Scott’s work Seeing like a State. Questions like “Are we seen as mere puppets to the state in the ever-grand art of statecraft?” are inevitable now. The question of justice is ever blatantly posed in front of us. It isn’t that the Indian state had not been under question for its repeated human rights violation of minority groups, including the violations in Kashmir, the increased mob lynching of Muslims, the discrimination of Dalits, the apathy of state towards peasants, women, the poor, Adivasis, and other marginalized groups. Now, with these unexpected events unfolding on campuses, India is fast pacing to become a state where students are labeled as rioters, libraries are smashed under the barrel of gun, and educational spaces are turned into concentration camps. It seems like a larger extension of the earlier habit of the state to ignore what it can choose to ignore. The questions that emerge from these unexpected events is: does India as a democratic country exist in the imagination of its subaltern people? Or, in Spivak’s terminology, can the subaltern people see it as a democratic landscape?