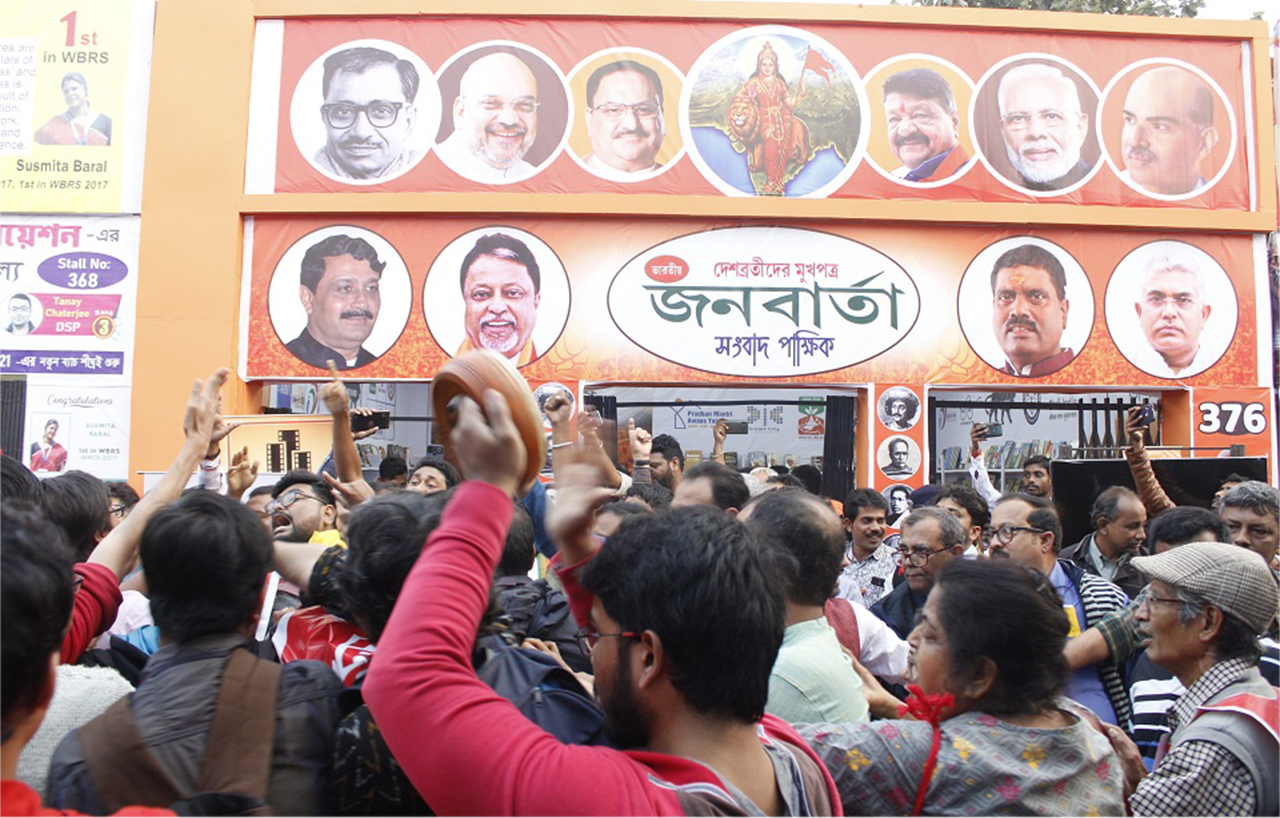 Today (Saturday, 8 February), the supporters of the BJP/VHP launched a brazen attack on a group of peaceful anti-CAA/NRC protestors at the Kolkata Book Fair. In spite of their presence in large numbers, the Bidhannagar police allowed the attack to happen, and then arrested two activists who were themselves assaulted.This led to further protests from the activists, to which the police responded with an indiscriminate use of force and arrest of over thirty activists. Utsa Sarmin writes about her horrifying encounter with these uniformed men on a rampage.

“You have never been raped right?” a male police officer asked me after arresting the two of us from a peaceful protest at the Kolkata International Book Fair. All the while, two female officers sitting next to us in the police van kept beating me and my female comrade. “We will see now who can save you from us,” – they said.

These were the conversations that followed the arrest and brutal beating of 31 activists including myself by the Bidhannagar police, at a peaceful protest inside the Kolkata Book Fair grounds.The protest was directed against the police for detaining two activists, after they were themselves attacked by the supporters of the right-wing Bharatiya Janata Party (BJP).

Earlier in the day, the supporters of the BJP attacked a group of peaceful protesters staging a silent demonstration in front of the stall of “Janabarta”, the party’s West Bengal mouthpiece. In particular, they were protesting the visit of the BJP MLA, Rahul Sinha. The police, despite being present, let the attack to happen and then detained two of the protesters at the police control room inside the book fair.

As soon as the news about the detention spread, many activists gathered in front of the police control room, demanding the immediate release of the arrested comrades. Despite the protests, the police took them away from the control room and when some people tried to stop the police van from leaving the premises, they arrested yet another activist.

After these arrests, more people started gathering at the police control room. The police were not even informing us where the arrested activists were being taken. Finally, a scuffle broke out between us and the police personnel. When a few journalists tried to cover the protests, the police started pushing them away and even tried to break someone’s camera. To stop this, some of us tried to form a barricade around the journalists and questioned the police on why they are beating them. Not being able to tolerate the questioning, they arrested me and another female comrade and put us in a police van. As soon as the van left the book fair premises, and there was no camera around, they started beating us up.

The female officers pulled our hairs, slapped us multiple times and even punched us in the back all the while threatening to destroy our lives and careers. The male police officer even threatened us with rape.

Soon we reached the police station, Bidhannagar East, and while they were noting down our information, four more comrades were brought to the police station. The male and female activists were kept separate. We were locked in a room for around 5 hours. Our phones were taken away. The police charged us with public nuisance and made us sign bail bonds.

After keeping us in detention for over 5 hours, we were asked to follow a female officer who took us out from a back gate to another police van without any explanation about the destination. All these while we could hear our other comrades gathered outside the police station demanding our immediate release or at least demanding the list of arrested people. We were finally taken to another police station, Bidhannagar North, where we had our medical examination done and were then released to our parents and comrades. Slowly all the 31 arrested persons were released. Some were lightly bruised, some badly, with one guy who could not even walk due to the beating.