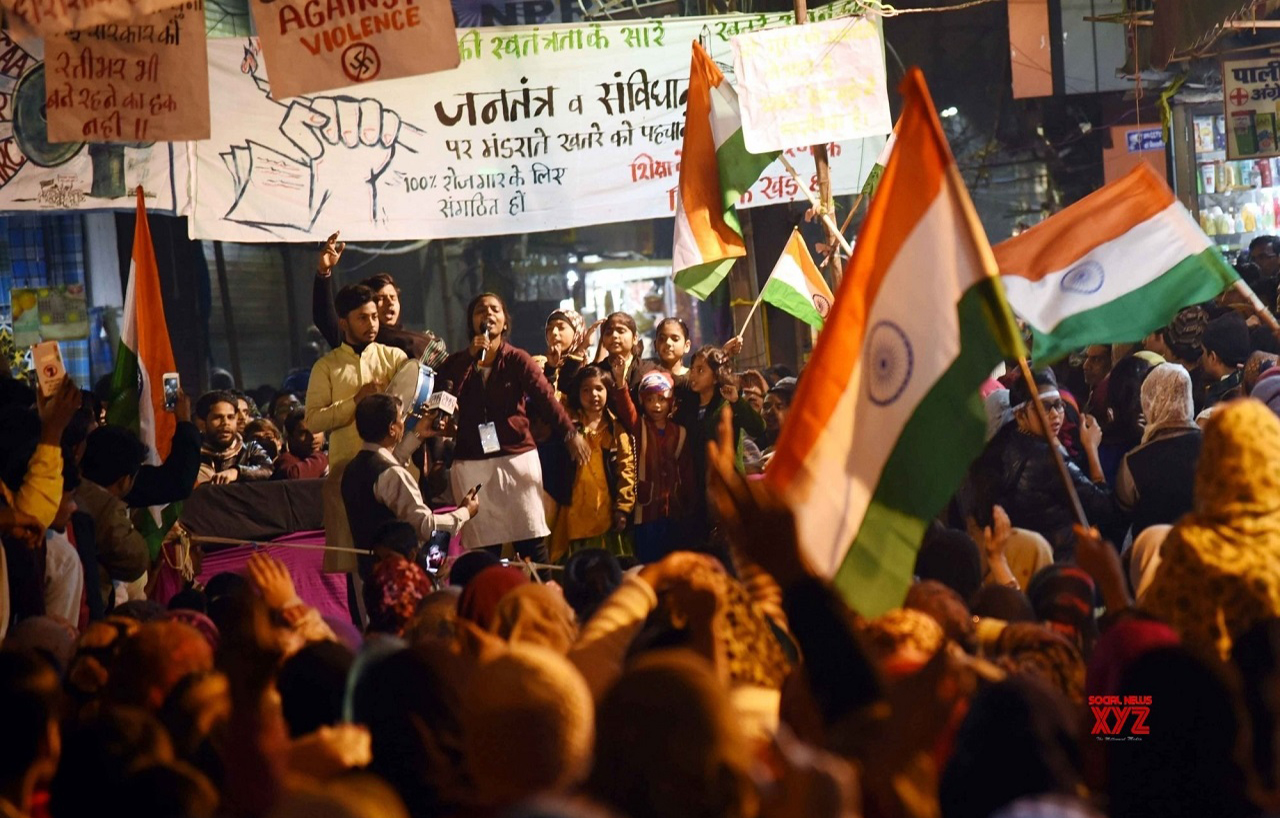 ‘Sabzibagh’ and ‘Shantibagh’ are new centres of anti-CAA agitation in Bihar.

Women are coming out onto the streets in many cities and towns across Bihar to save the constitution, writes Anish Ankur.

Protest actions against the CAA/NPR/NRC are gathering momentum, not only in Patna, but in different towns and cities of Bihar. Sabzibagh in Patna, Harun Nagar and Isapur in Phulwari Sharif, Lalbagh near Patna University, Alamganj in the city of Patna and Shantibagh in Gaya are new Shaheen Baghs of  Bihar. Protest have now entered their 21th day in Shantibagh (Gaya), their 11th day in Sabzibagh (Patna), and their 9th day in Harun Nagar (Phulwari Sharif). Moreover, new protest sites are springing up almost every day in different parts of the state, for example  Begusarai, Digha, Buxar, and Samastipur. The regions of  Bhagalpur, Muzaffarpur, Kishanganj, and Araria have already taken the lead in the anti-CAA movement. Other cities like Buxar, Siwan, and Gopalganj are following these leading centres. Big rallies and indefinite dharnas (sit-ins) are being organised on an almost daily basis. Most notably, a majority of the protestors are women. Never have women entered public and political life in Bihar in such large numbers. Political analysts are sensing a new phenomenon in the history of mass mobilisations in Bihar.

Sabzibagh, a famously Muslim dominated part of Patna, has attracted the national attention. Sabzibagh has now become the centre of political activities in Patna. Taushique Alam, a young activist of Sabzibagh, said

“After having consultation with friends and family we decided to initiate anti-CAA/NRC protest. For the first two days only few people participated but slowly people started attending in  large numbers. Now, we have to work hard just to manage the crowd.”

Sabzibagh is a bustling  commercial  centre of Patna, where everything is sold from clothes and jewellery to delicious food items. Sabzibagh is connected to the Ashok Rajpath, an ancient road which connects the new and old cities of Patna. Patna University, too, is very close to Sabzibagh and consequently the presence of a large number of students can be seen at the protests.

A makeshift stage has been erected on one side of the lane, allowing vehicles to pass using the other lane, but the crowds gathered are so large in this area that it becomes very difficult to pass through this lane, particularly in the evening. About two to three thousand people gather every day in Sabzibagh. On every alternate three days, the lanes are changed from eastern to western side, so that the business of shopkeepers does not get affected due to the crowds gathering. Shopkeepers are also cooperating in maintaining peace.

According to  journalist Irshadul Haque of Naukarshahi.in, who is closely following the goings-on at Sabzibagh,

“These places have become a training ground for young and future activists of minority community. For [the] first few days they watch the activities with their family and afterwards they deliver a speech by their own or  write a poem on CAA/NRC. In the evening women, along with their children, prefer to go to protest site [at] Sabzibagh instead of shopping. I have seen women who left their evening engagements to attend the anti-CAA protest. Some women tell their husbands [to] leave them at the protest site while going to their offices and pick [them] up in the evening while returning.”

Almost every day, political leaders of different parties, social  and cultural activist, artists, and poets are joining the protests, in solidarity with the residents of Sabzibagh. The same situation can be witnessed at Harun Nagar in Phulwari Sharif. In Phulwari Sharif the stage has been set up in a narrow lane near the roadside. Braving the cold winds, these women stay at these places till late at night. Kanhaiya Kumar’s signature song-cum-slogan “Hum kya chahte? Azadi! Jaan se pyaari, azaadi! (What do we want? Freedom! More dear than life is freedom!)” has become  an essential part of every anti-CAA/NRC/NPR protest activity. 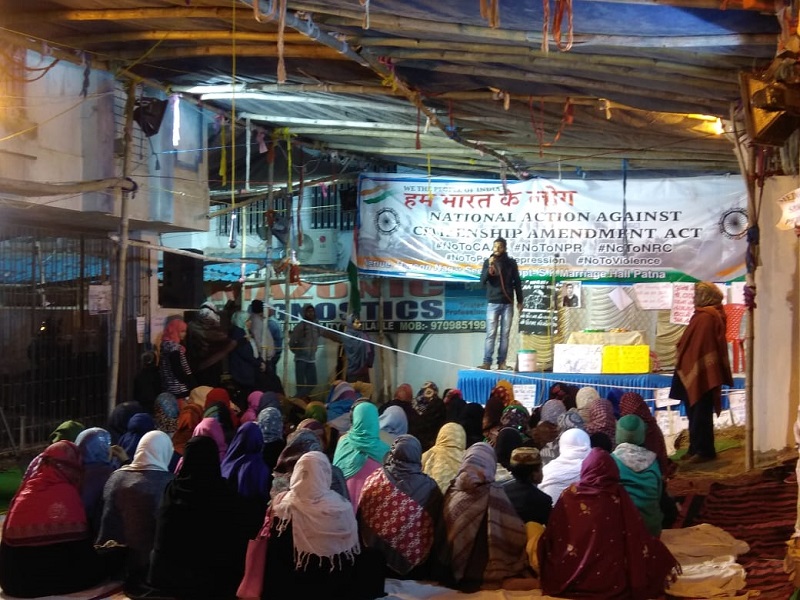 Although the protest continues throughout the day, in the evening in particular, the public meetings become very lively. People from all walks of life come to watch and be part of the anti-CAA protest. Songs, slogans, and speeches are delivered regularly. People throng to these places, and they are not a passive and quiet audience; rather, they actively reacts to the activities going on on the stages.

But what is the cause of the presence of so many women at these protests?  Social activist Ghalib Khan observed

“There is a sense of hurt feeling among [the] Muslim community, that they have been pushed to [the] wall by this Modi government and [that] there is nothing more to lose now. This feeling have made these women fearless. For the first time women are coming out not in the defence of ‘Sharia Law’ or ‘Triple Talaq’ but to save the Constitution of India. Which is itself a very new phenomenon.”

“Traditional minority leadership like Mullas and Maulvis, are not in the forefront of struggle. Women from all  strata, from poor to upper [and] middle classes are sitting side by side for a common cause. And if we look at the composition of  women we can easily notice that women with rural background are in [the] majority.”

A festive mood has prevailed at these places and the presence of women in large numbers have made the volunteers very alert in maintaining peace and discipline. Pictures of Gandhi, Ambedkar, and the names of revolutionaries like Ramprasad Bismil, Ashfaqullah Khan, and Bhagat Singh are displayed on the banner. “Bismil-Ashfaq ki yari, hai virasat hamari! (The revolutionary friendship of Bismil and Ashfaq is our shared inheritance!)’’. The national flag  can be seen everywhere, from centre-stage to in the hands of protestors. Protesters wave the national flag while sloganeering. Everybody raises their hands and repeats the slogans.

A banner at Sabzibagh protest site.

Politicians like CPI leader and former JNUSU president Kanhiya Kumar, former deputy chief minister Tejaswi Yadav, former member of Rajya Sabha Ali Anwar, Congress leader Shakti Singh Gohil, Dr. Kafil Khan, and CPI(ML-Liberation) general secretary Dipankar Bhattacharya have visited and addressed the gathering till now. Since this year is an election year in Bihar, every  party barring the BJP wants to be on the right side of this issue.

Social and political activists from very far off places have come and requested the organisers for an opportunity to speak publicly against the citizenship amendment. While describing the dangers of the CAA and the NRC, they also take care to highlight that this move by the central government is part of a larger agenda to convert this secular and democratic character of our country into their vision of a rabidly intolerant Hindu Rashtra.

Reacting about the character of these protest at Sabzibagh and Phulwari Sharif, left political activist of the CPI(ML-PRC) Ajay Kumar Sinha  said

“The present anti-CAA protests are basically spontaneous in nature, led and controlled by students and youth of all communities, participated hugely by Muslim women and men. It has great strength at its disposal having common Muslim masses as its bench strength and cadre force. Slowly and steadily some organised nucleus is riding over its head, among which revolutionary ideology is penetrating and disseminating very fast.”

This is evident  in the slogans heard at Sabzibagh. Alongside questions of citizenship, the discussions at Sabzibagh also turn to fascism, capitalism, and inequality.

For the first time, Left activists are playing an important role in these new protest site. Describing the political nature of the protests, Irshadul Haque opined

“Young cadre belonging to different Left groups and parties are playing a very vital role. Entire coordination is in the hands of Left activists. They are very adept and skilled in raising slogans, singing songs, reciting poems and managing things at the ground level. Cadres of other parties are hardly seen at these places although their leaders come to address the gathering.”

The Left parties have planned a human chain against the CAA on the 25th of January while  on 30th January (the martyrdom day of Mahatma Gandhi) will be observed as Satyagraha Day. The CPI also organised a rally in Gaya  against the CAA on 21st January and important national leaders like CPI general secretary D. Raja, Amarjeet Kaur, Atul Kumar Anjan,  Satyanarayan Singh, Masood Manzar, and  Kanhaiya Kumar addressed the gathering.

Kanahaiya Kumar is starting a Gandhi Yatra from Bettiah in West Champaran, a place associated with Mahtama Gandhi for his famous Champaran Satyagraha, on 30th January. Tejasvi Yadav has already campaigned in the Muslim majority Seemanchal area. An anti-CAA forum , consisting of many organisations, has been formed for this purpose itself, organising itself into the ‘Nagrik Sanskritik Sabha’ (Citizens Cultural Resistance) in Patna while Loktantrik Janpahal took out a ‘Bicycle rally’ on 21st January.

On witnessing the way these anti-CAA agitations are spreading to newer areas and people, one is hopeful that it has the potential to adopt a mass character hitherto unseen in Bihar since 1974.

Anish Ankur is a social and political activist from Bihar.