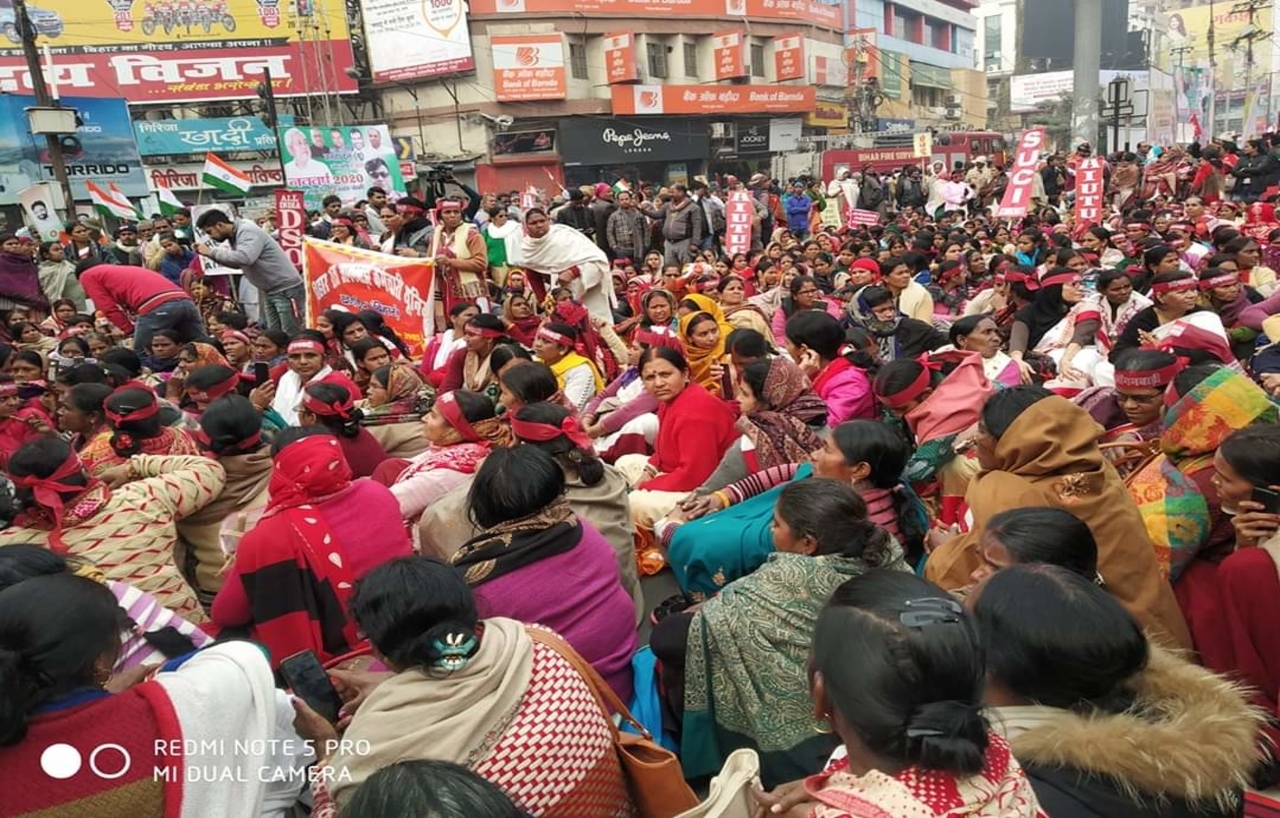 India today witnessed one of the most widespread and largest strike in its history. Millions including workers, farm labourers and students are on strike. The strike has been called by ten central trade unions and a number of workers’ organisations. Farmers’ organisations and movements, as well as students’ organisations, have joined the mobilisation. Below is a brief report and images of the general strike from Bihar by Anish Ankur.

Today, in an unprecedented show of strength, women of Bihar almost stormed the nerve centre of Patna, Dakbunglaw roundabout and blocked it for nearly four hours in support of their demands. They outnumbered the men workers. Anaganwadi and ASHA workers, construction workers, pensioners associations, teacher and student organizations, civil society all of them joined hands in support of the strike. Buses, banks and train services were badly affected all over Bihar. 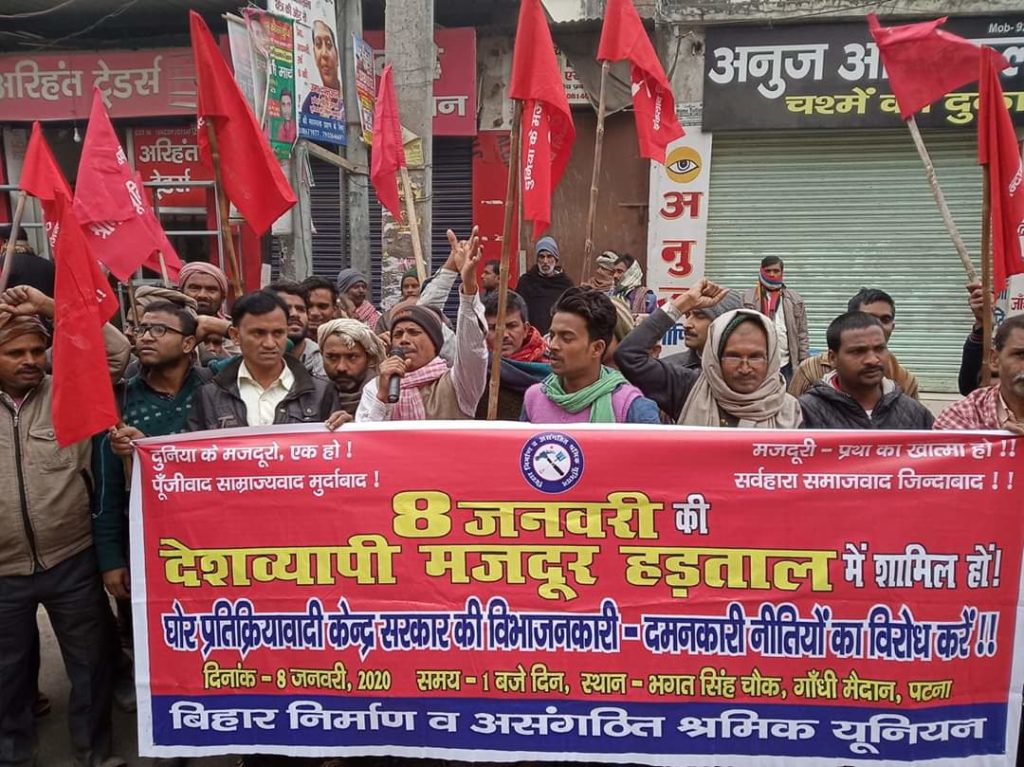 Anganwadi and ASHA workers comprised the major part of the protestors. They were chanting slogans, singing songs, distributing leaflets against the Modi government as well as Nitish government. The more popular ones were –Hamara baccha rota hai, Nitish Kumar sota hai (Our children are crying and Nitish Kumar is sleeping), Nitish-Modi Kholo kaan, nahin to hoga chakka jaam (Nitish-Modi listen to our demands otherwise there will be complete shutdown).

When GroundXero talked to these protesting women, most of them with red ribbon tied around their forehead, they collectively said, with an agitating voice, “We have to discharge so many duties like looking after pregnant women, taking care of nearly forty kids of below six years old, give polio drop, do census work, and many other varied works. But what we get in return of these services? Only five thousand rupees monthly! So our slogans are ‘Panch hajar me dam nahin, ikkis hajar se kam nahin’ (We will not accept less than twenty one thousand per month, five thousand is nothing) and ‘Mandeya nahin, Mazduri chahiye’ (We need wage, not honorarium).

A joint procession of all the central as well as state level trade unions started from the historic Gandhi Maidan in Patna and after passing through Frazer road reached Dakbunglaw Chauk. “All India Kisan Sangharsh Samanvay Samiti”, a forum of 250 farmers organizations from across the country, 13 student organizations, Citizens Forum, cultural and human rights activists, writers, theatre artist, everyone participated in the general strike. These organization held demonstrations on their own and raised their particular demands and issues. 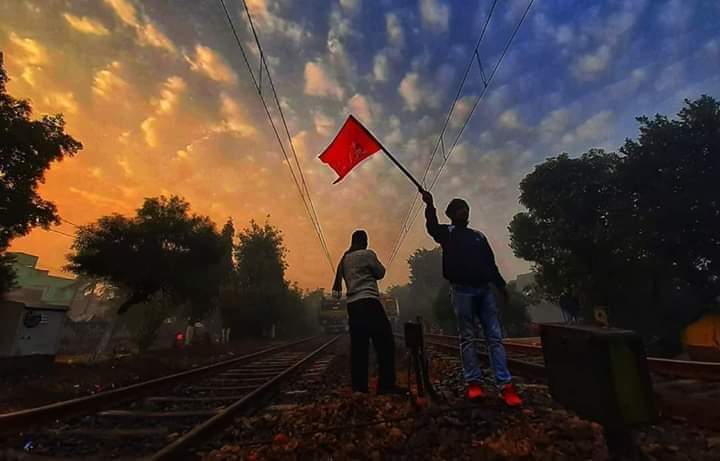 The gathering was so huge that the leaders have to struggle a lot to start the meeting. Representative of various trade unions like Gaznafar Nawab (AITUC), Ganesh Shankar Singh (CITU), R.N.Thakur (AICCTU), Chandra Prakash Singh (INTUC), Ajay Kumar Sinha (IFTU- Sarwahara), Suryakar Jitendra (AIUTUC), Virendra Mahto (UTUC), Satyanarayan Singh (CPI), Awadhesh Kumar (CPI-M), Dhirendra Jha (CPI-ML), Nripen Krishna Mahto and leaders of Anganwdi and ASHA workers like Kumar Bindeshwar, Kaushlendra Kumar, Punam, Soni Singh and others addressed the gathering. Speakers attacked the anti-labor policies of the Modi government and were particularly critical of the four labour codes, which according to them are an instrument to throw workers in a slave like situation. While condemning the brutal attack on JNU students and criticizing the CAA/NRC, the union leaders said that unless these anti-people policies are withdrawn by the government, our struggle will continue and much bigger struggles are awaiting this government.

Ajay Kumar, Bihar state President of AITUC (which is celebrating its centenary year) summed up the meeting in these words, “Women came out everywhere in Bihar. They are now the backbone of our fight against Modi government. These women have given a strong message to central and state government that mend your anti-people ways lest we will give you a befitting reply.”

Anis Ankur is a social and political activist from Bihar.