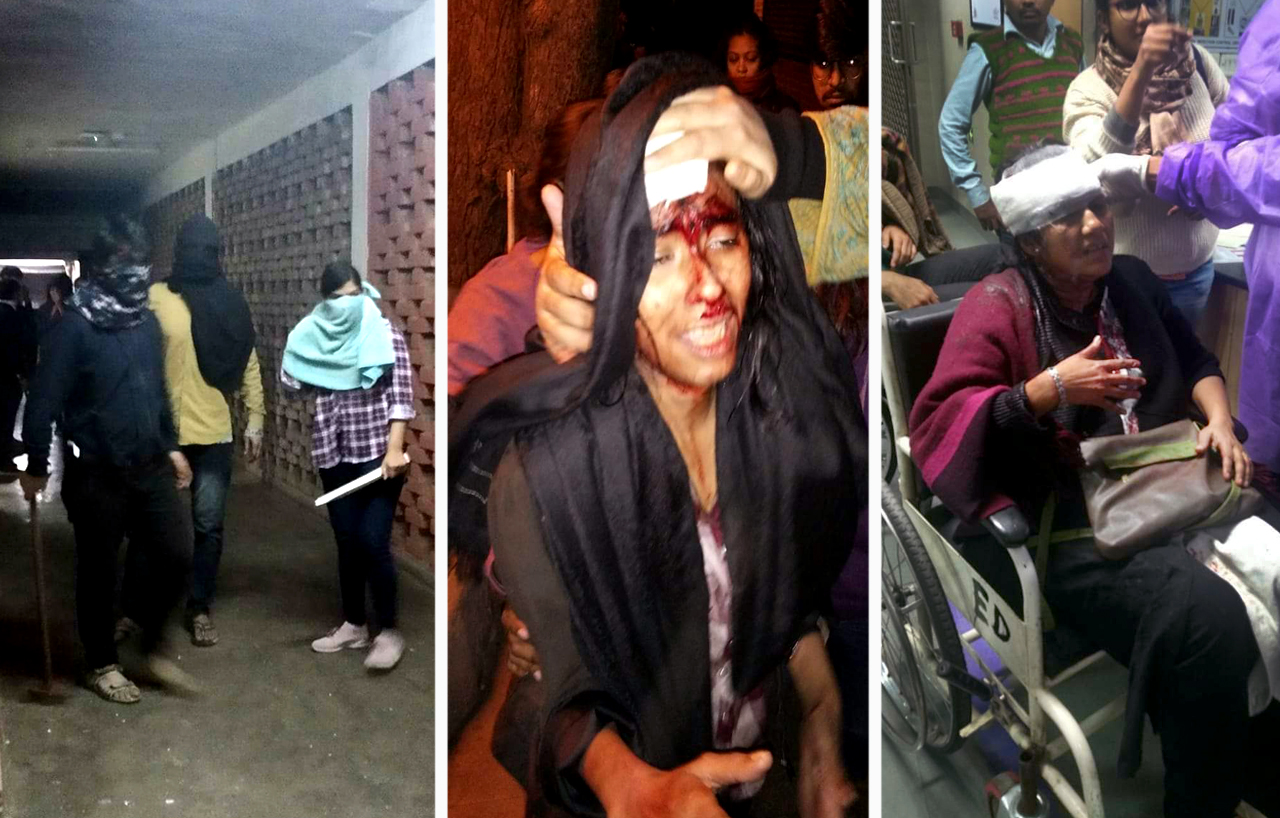 Students and teachers in JNU attacked by masked ABVP goons

Last night, a pre-planned attack was launched by masked goons of  Akhil BharatiyaVidyarthi Parishad (ABVP), on the students of Jawaharlal Nehru University, while the police in campus remained a by stander. Student holds the Central Government and JNU administration responsible for the attack. A GroundXero report.

The members of Akhil Bharatiya Vidyarthi Parishad (ABVP), a student organisation affiliated to Rashtriya SwayamSevak Sangh (RSS), attacked the students of Jawaharlal Nehru University, while the police in campus stood by. For the past few days, students at JNU have been protesting against the massive fee hike announced by the administration. The anti fee hike movement started about a month back with the administration declaring a fee hike that will double the cost of living in a campus hostel from Rs 27,600-32,000 annually up to Rs 55,000-61,000. 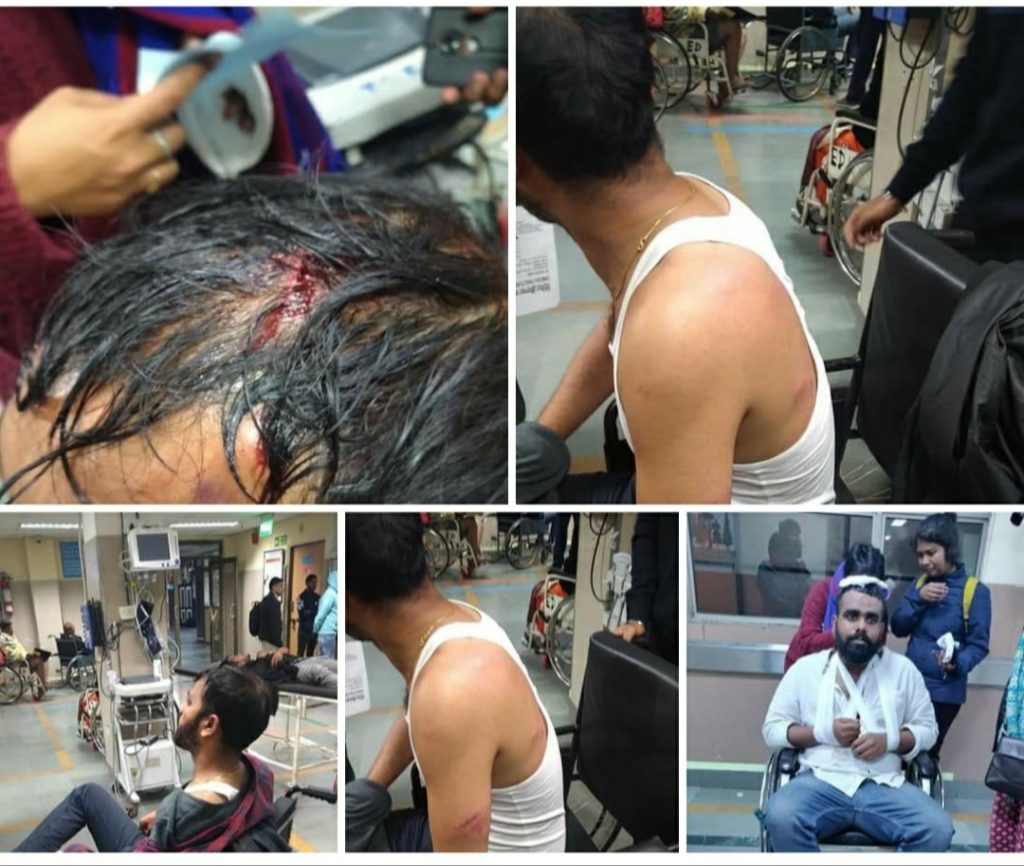 The members of the Hindu right wing group have been attacking the students in the campus for the last two days. Lat night, they barged into the campus with hockey sticks, rods and sharp weapons, while the police kept on watching passively. They marched towards Sabarmati Dhaba, where the students and the professors had organized talks on the present struggle against fee hike. They started attacking the students, who had been protesting peacefully. In this attack, several students were injured. At the time of writing this report, 15 students had been admitted to AIIMS trauma centre, including JNUSU president Aishe Ghosh who suffered a severe head injury, Professor Sucharita Sen and JNUSU General Secretary, Satish Chandra Yadav. Videos taken by the students clearly show, masked miscreants entering the ladies hostel and carrying out brutal attack on the female students. 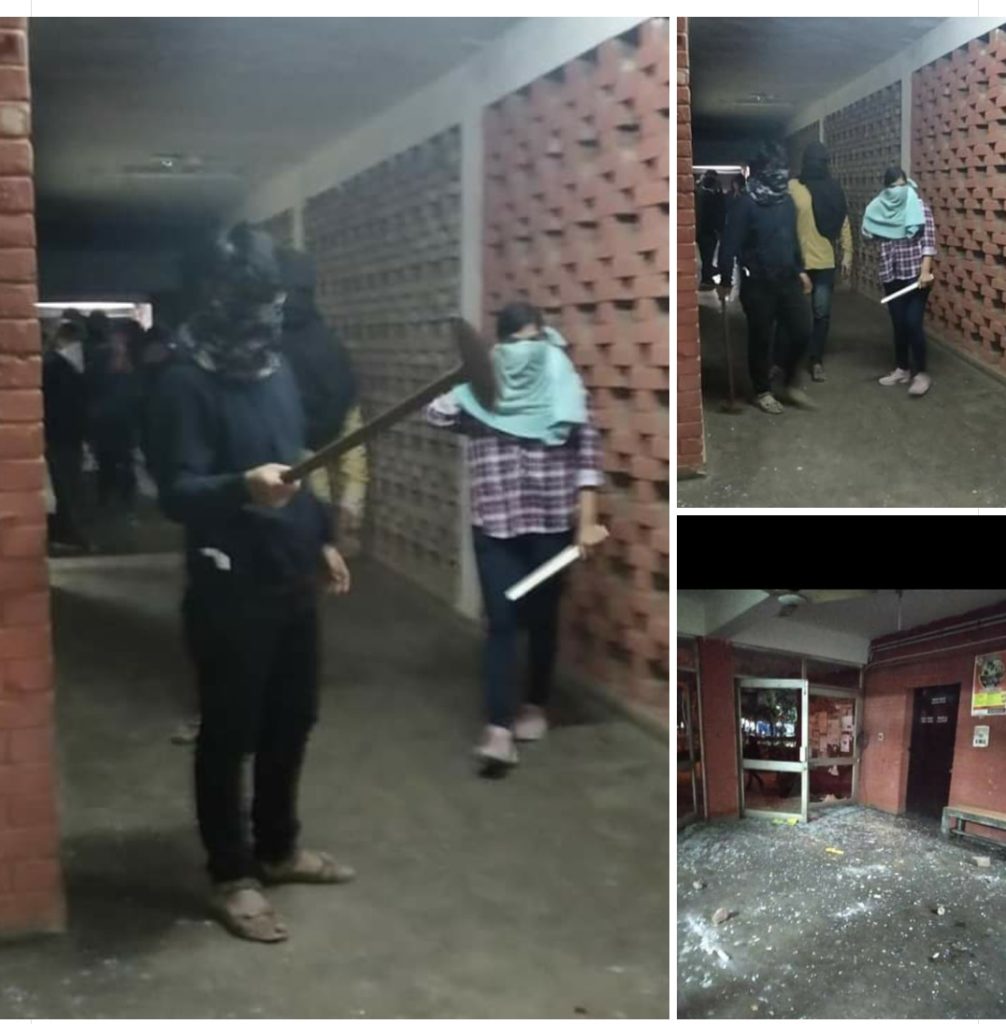 The Hindu reported, “Doctors attacked near JNU campus entrance. A group of nine doctors from AIIMS and other hospitals were attacked by a violent mob outside JNU main entrance gate. The doctors, who had come in an ambulance with medical supplies to help the injured students inside the JNU campus, were not allowed to enter the campus.” Democratic Youth Federation of India (DYFI) Delhi, informed that the organization’s medical van, which was trying to head in to provide medical support to the injured students, was attacked by the miscreants. They were wearing helmets and masks, holding rods, outside the JNU Main Gate. The ambulance was not allowed to enter even after checking the Id cards of the doctors and lawyers present. The miscreants broke the front window, hammered on the vehicle repeatedly, threatened, and manhandled the volunteers, including the women volunteers.

The Hindu also reported that the police said that they will take action once they receive the complaints. The Vice Chancellor of the university remained silent and the VC did not find it necessary to call the police and the police already present in the campus did not act to ensure the safety of the students. Instead when members of the civil society and other political parties arrived at the JNU main gate, the police stopped them from entering the campus. Yogendra Yadav tweeted, “All roads leading to #JNU blocked by @Delhi Police Complete cover being provided to goons inside the campus”. Later, a video also showed that the miscreants are leaving the campus while the police remains passive bystanders. This leads to the legitimate question raised by the students. How can a group of people get so much impunity to carry out such blatant attack in front of the police? The students held the central government responsible for the attack.

The horrifying attack continued for almost four hours. But nothing was done to stop the violence inside the  University. No administrative personnel from the University came out to protect the students. The professors who came in to save the students were also attacked. Many of them suffered severe injuries.

The most terrifying thing was the Hindutva goons were present outside the University gate also and those who gathered in support of the attacked students were stopped by them and the police outside. This attack was not random at all and absolutely pre-planned. Messages circulating in a Whatsapp group ‘Left Terror Down Down’ and ‘Friends of RSS’ have been leaked, clearly indicates that the attack was pre-planned. The silence and inaction of the university administration during the attack, which was being televised live by all news channels, raises questions about its role. 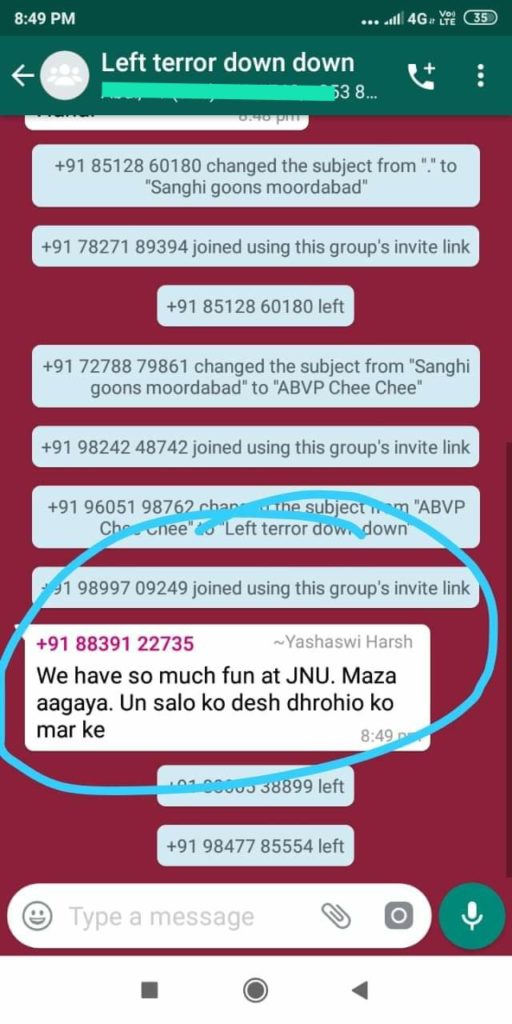 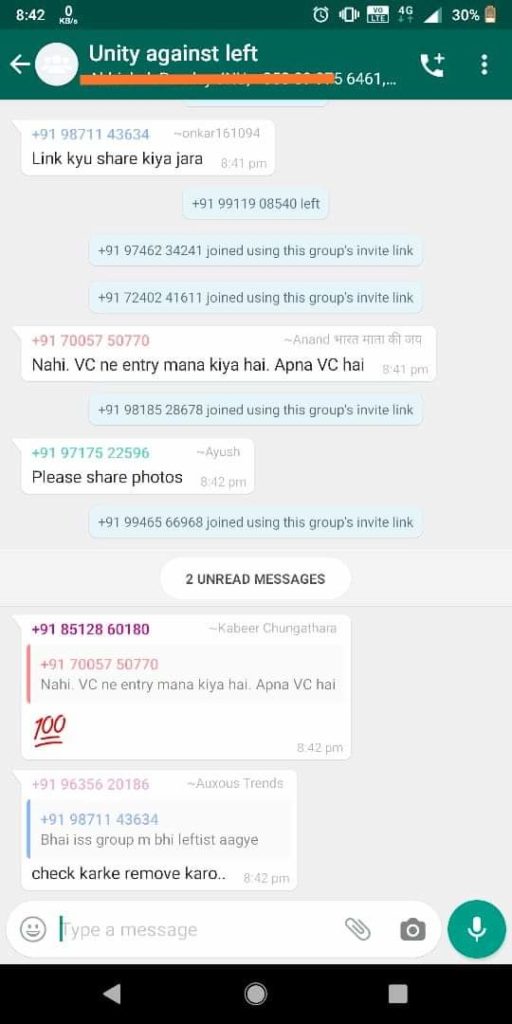 At the same time, came news of Shaheen Bagh also under police threat. Buses full of Delhi police forces appeared there. Across the country #SOSJNU was circulated in social media. In Mumbai, Kolkata protesters occupied roads in support of the attacked students of JNU.