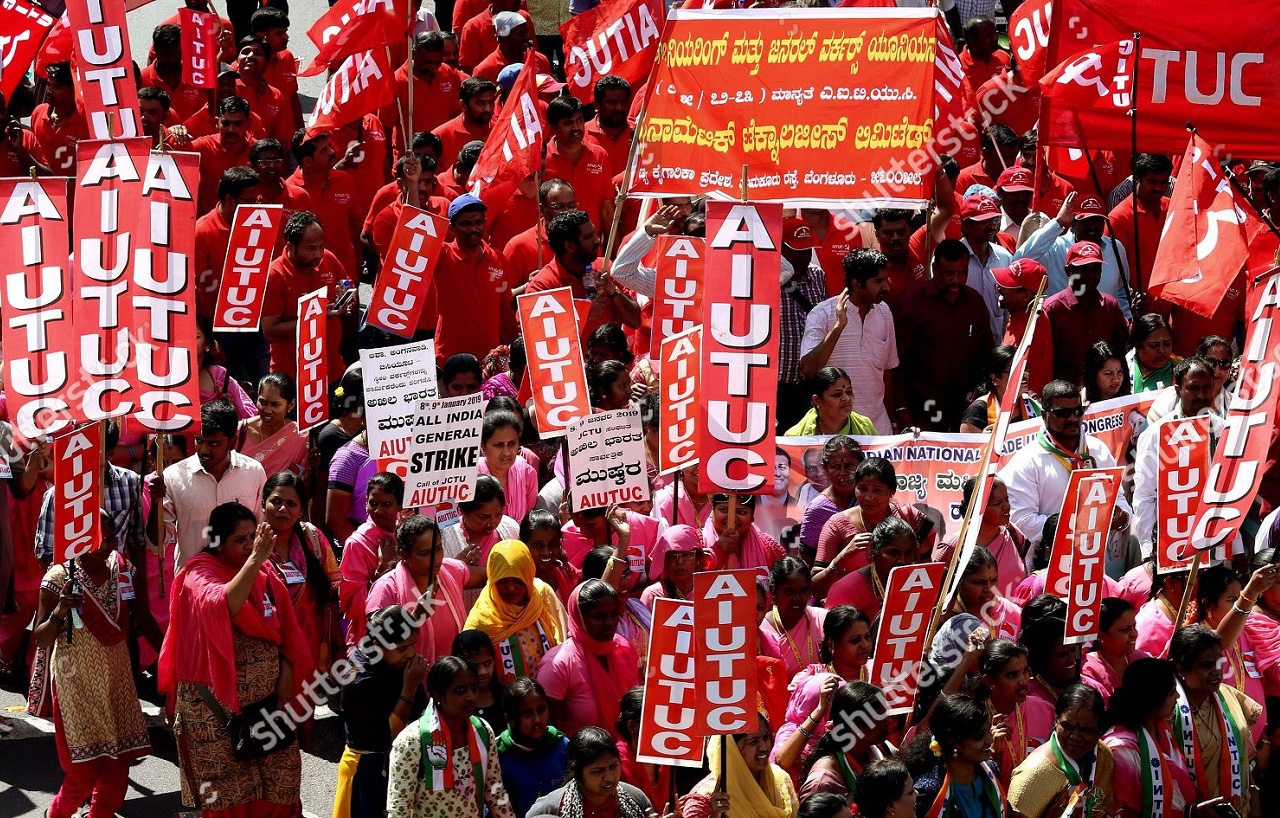 “Strike That!” General Strikes and The Media – A Case Study

The role of a free media in such popular struggles to is hard to overstate. An uncontroversial expectation is that media should cover issues of public interest. Often however, in a reversal of this expectation, chosen issues are covered to generate public interest. In the light of the upcoming general strike on January 8, 2020, this article looks at media coverage of the general strike of 2019. The hope is that such a critique would help in demanding that the mainstream media cover issues of direct benefit to its audience as well as encourage alternative media platforms to rectify this deficit, writes C. Yalahanka.

2019 has been called “the year of protests” because of the number of popular movements around the world in resistance to authoritarianism and in demand of just and equitable living conditions. Hong Kong, France, Iran, Iraq, Chile, Lebanon, Malta, Bolivia and Puerto Rico are a few such places. India too has witnessed several uprisings, the most recent of these being the anti-CAA/NRC/NPR demonstrations happening all over the country. This uprising, which is of a scale unseen since the 1970s is not merely a reaction to the isolated event of the passage of the Citizenship Amendment Act, 2019 but should be seen as the culmination of the stresses felt by various sections of the society due to severe agrarian distress, an unemployment crisis, and an apathetic ruling dispensation. The Kisan Long March of 2018 and the workers’ General Strike of early 2019 are evidence of this.

On the fourth International Yoga Day, June 21, 2018, as representatives of the Guinness Book of World Records observed, yoga guru and co-founder of Patanjali Ayurved Ltd. Baba Ramdev led a yoga session for over one lakh people in the city of Kota, Rajasthan. He, along with the then chief minister of Rajasthan Vasundhara Raje, were awarded a certificate declaring that the Kota district administration along with Patanjali Yogpeeth had organized the largest gathering of people performing yoga worldwide. “Yoga is beautiful because it is ancient yet modern,” declared Prime Minister Narendra Modi at an event held at the Dehradun’s Forest Research Institute. “Yoga has the perfect solution to the problems we face, either as individuals or in society.” [1]

As it turns out, an explosive report first published in Business Standard on January 31, 2019 detailed one such problem the citizens of our country were facing at that very moment on both the individual as well as social level. Data from the National Sample Survey Office’s Periodic Labour Force survey, withheld from release by the Government, revealed that India’s unemployment rate in 2017-18 stood at a 45 year high of 6.1%, increasing almost three-fold from its 2011-12 value of 2.2% [2]. This distress was of course felt by the country’s working classes well before the publication of the Business Standard report and they had made an attempt on January 8-9, 2019 to bring the public’s attention to it. Instead of following the Prime Minister’s perfect solution of yoga, they chose to stick to a bargaining device used for centuries all over the world and has given us such things as the eight hour work day, weekends, minimum wages, overtime, and safety standards. On January 8-9, in the absence of observers from the Guinness Book, with little to no media coverage during or after the event, with an estimated 15 crore people participating- 1500 times the record-breaking size of the gathering in Kota, Indian labour may have conducted the largest general strike in human history [5].

It is perhaps worthwhile to put this staggering number in perspective. 15 crore or 150 million people is a little less than one half of the population of the United States of America, about 4 times the population of Canada and three fifths of the population of all of South India (Andhra Pradesh, Karnataka, Kerala, Tamil Nadu and Telangana, Andaman and Nicobar islands, Lakshadweep and Puducherry combined). Even at the time of its announcement on September 28, 2018, the general strike had the endorsement of ten of the eleven major central trade unions – INTUC, AITUC, HMS, CITU, AIUTUC,TUCC, AICCTU, SEWA, LPF, UTUC (the exception being the RSS affiliated BMS), all independent National Federations of Workers and Employees of both Industrial and Service sectors, Central and State Government employees including railways, defense, health, education, water, postal services, factory workers, the unorganised sectors – construction, beedi, street vendors, domestic workers, migrant workers, rickshaw, auto-rickshaw and taxi drivers as well as agricultural workers [3,4].

Calling the policies of the Narendra-Modi led NDA government “anti-people, anti-workers and anti-national”, expressing concern about the deteriorating situation of the national economy and dismay at the lack of consultation with workers’ representatives, the joint declaration, drafted at the National Convention of Workers announced a series of rallies and conventions in the months following and culminating in the two-day all-India strike. Their demands, formulated even before the declaration of the strike and reiterated in publicity material during the strike, were listed in the form of a 12-point charter and included such things as the opposition to privatization, contract labour and FDI, the institution of a national minimum wage, public distribution system and social security fund, the implementations of the recommendations of the M.S. Swaminathan Committee as well as the parliamentary ratification of International Labour Organization conventions C87 and C98 [3,4].

The general strike has a far greater significance other than just being the largest in human history. In one of the world’s largest voter surveys on issues of governance conducted by the Association for Democratic Reform (ADR) during October to December 2018 just before the general strike, better employment opportunities figured as the highest priority, followed by healthcare and drinking water facilities. Since the demand for better employment conditions is a core part of the demands of the strikers, the largest general strike in human history was in fact about the most important governance issue of the voters of the world’s largest democracy. With the kind of superlatives involved in the mere description of this event, it is curious to examine how the event was covered by the media and reported to the general public. As a specific case study, we will study at the coverage by the Bangalore print edition of the Hindu and compare it with the same given to the events of the International Yoga Day.

In its fourth year after the United Nations accepted India’s proposal, Yoga Day celebrations across the country received wide media attention. Several online news portals and news channels covered it live. Print editions of newspapers the following day reported on the various events in substantial detail. The front page of the Bangalore edition of The Hindu contained a picture of a yoga session outside the UN Headquarters in New York (and captioned “of body, mind and spirit”). The Karnataka section contained a picture of Former Prime Minister Deve Gowda performing an asana (and captioned “heads over heels for yoga”) along with an interview of the President of the Yoga Practitioners Association of India, K. Krishna Bhat as well as a picture of foreigners performing yoga at the Mysore Race Club. In an op-ed (titled “Making children happy”), the Director and UNESCO Representative of the UNESCO Cluster Oﬃce for India, Bangladesh, Bhutan, Nepal, the Maldives, and Sri Lanka spoke of the importance of introducing Yoga to children at an early age. The “News” section carried the statement by the Prime Minister along with a picture of him stretching as well as a report on Indian and Chinese soldiers performing yoga together in Eastern Ladakh (“Joint exercise by soldiers”- pun presumably intended). Apart from being simply the perfect solution to all individual and social problems, yoga was reportedly a unifying force bringing together people from all over the world, different political parties and even kindling friendship between soldiers across national borders.

The Bangalore edition of The Hindu on January 9 and 10 carried four and two articles on the strike respectively. A tiny piece in the Bengaluru section on January 9 titled ‘Strike successful’ contained a solitary line about the demands of the strike participants – “The protesters demanded that the central Government reconsider its ‘anti-labour’ policies”. To varying degrees, all others merely reported on the disruptions to public services and property loss caused by the strike with titles like “General strike evoked mixed response, affects PSU banks” and accompanying pictures with captions like ‘Passengers arriving at Bengaluru railway station had a tough time’ and ‘Visually challenged persons struggle in the absence of BMTC buses’ for good measure. Such was the reporting on the largest ever strike on the most important electoral issue of the nation a few months before the general elections.

It could be argued that the ADR voter survey gives us an insight into what issues the general public is interested in, would like the government to focus on and perhaps would like to read about in its newspapers. Two results of the survey are worth mentioning. First, on the top ten issues of which employment was the highest, the survey rated the performance of the Modi government “below average”. Second, hot-button issues of strong defence/ military and terrorism featured as low as 30th out of the 31 listed issues! Despite this, in a remarkable feat of propaganda just a few months after the survey, aided by a shift in public sentiment following the Pulwama attack, the Modi government was able to conduct a successful campaign primarily on the issue of terrorism and national security! While the reasons for a political party to want to set the agenda might be somewhat understandable, for the media to do the same and not report on important events related to issues that are known to be of prime interest to its consumers is simply baffling.

Issues of employment continue to be important and as does the struggle of organized labour whose impressive and record breaking organized efforts of the general strike appears to have been negated by the lack of media coverage and public attention. This general apathy, along with its majority in parliament has allowed the government to plow ahead with its agenda. The code of wages bill, which is part of the government’s attempt at the amalgamation several labour laws, does away with the 8-hour workday shift, increases overtime and sets the national minimum floor wage at the ‘starvation’ value of INR 178. Protesting against new labour laws, the continued efforts to privatize public assets along with the original demands and grievances, the trade unions have again called for a nation-wide strike on January 8-9, 2020 [8]. It is likely that the strike this year would find support from the ongoing massive anti CAA-NRC-NPR protests that have rocked the country in ways unseen since the emergency years of 1970s [9]. Thus, participation in this strike is likely to be even bigger than the previous ones. Even now, if it is met with the same indifference, it is unclear what organized labour will do next. Perhaps they will finally give yoga a try.

Yalahanka is an academic and activist based in Bangalore.

Share this
Tags : media General Strike of 2019 Media and workers strike Media coverage of the general strike of 2019