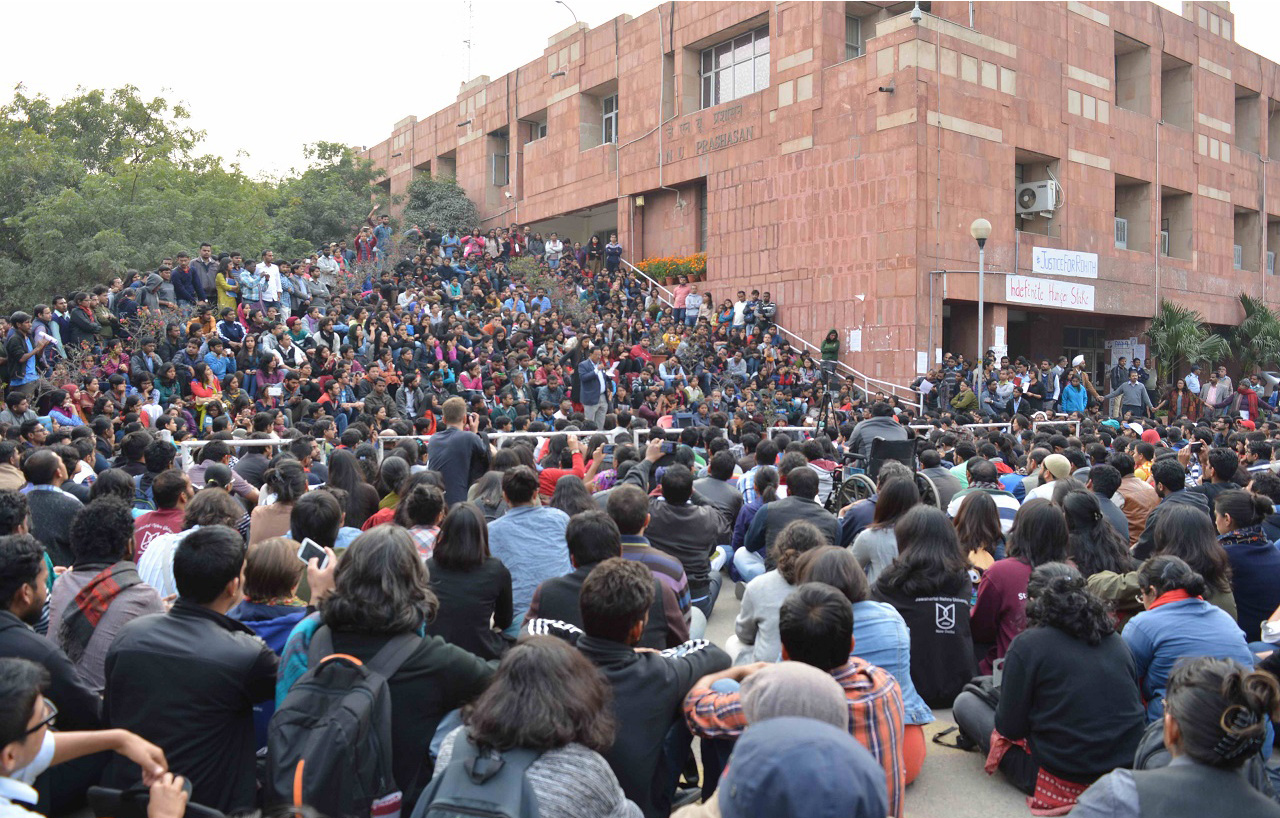 The Isolation of JNU

Akash Bhattacharya, draws upon his personal experiences as student, to comment on a less highlighted aspect of spaces such as JNU – their ability to compel social elites to question their own privileges.

I write this note to share a few thoughts and experiences considering the recent conversations on subsidies in higher education. The tussle between the Indian state and prominent public universities such as Hyderabad Central University (HCU), Punjab University (PU) and Jawaharlal Nehru University (JNU) over the last few years has provided the occasion for some meaningful conversations on the subject. The latest fee-hike in JNU, the students’ agitation against it, and the potential widening of the struggle into an incipient movement for universal public education, reignited the issue yet again. As of now it has been side-tracked, at least temporarily, by the manufactured citizenship emergency. Notwithstanding the citizenship crisis that is engulfing us, the conversation on education is perhaps worth building up, for it is an integral part of our current predicaments.

When the state crackdown on the anti-fee hike agitation was at its peak, a range of students and alumni belonging to Dalit, Muslim and Adivasi communities, and to the working classes in general, pointed out how important subsidies have been in allowing them to attend colleges and universities. Those defending JNU suggested that thanks to subsidies and affirmative action public universities such as JNU, PU and HCU, to name a few, have been able to play a valuable role – these institutions have granted access to higher education to communities that have been denied education historically. In other words, India’s public universities (both central and state universities) have facilitated a partial realization of the constitutional ideal of equality.

Before talking about the place of the public university in India’s liberal polity, let me draw upon my personal experiences to comment on a less highlighted aspect of spaces such as JNU – their ability to compel social elites to question their own privileges. I should clarify here that the observations and feelings described below are entirely personal. This piece should not be read as representative of the opinions and experiences of students or alumni of JNU or of India’s public universities in general. In addition, the centrality I give to JNU as a public university over here is purely because I intend to speak based on my personal experience and avoid overt generalisations.

Born into a Bengali Brahmin household and growing up as a young man in the nineties in a college campus where my father taught, I was shielded from the sort of experiences that made one feel unequal. Till I left school, normal life meant befriending (primarily) teachers’ kids, speaking with the ‘non-teaching staff’ at my father’s department with a hint of entitlement, and quietly revelling in the material privileges of campus life. For many young people of my background who had been socialised into discriminating, caste-based reservation in education was the first difficult encounter with people who were ‘not like us’. Difficult, because it threatened to abruptly reverse normal power relations. The son of a domestic worker, who had scored less marks in the board examination than the blue-eyed boy of the household, could suddenly beat the prodigal son to a college seat.

In family conversations around college admission people usually got grouped into two categories – there was ‘us’ and there were the ‘quotas’. Students like ‘us’ got admission in ‘good’ colleges despite seats being ‘lost’ due to reservations; ‘the quotas’ got admission in these same colleges only because of reservations. Since I was comfortably ‘meritorious’, the us/them binary did not immediately assume real forms for me. It needed a JNU for that to happen.

When I entered JNU in 2009, caste-based reservations (OBC, alongside SC and ST) in admission were on the cusp of being fully implemented. Our batch lacked OBC reservations during the M.A. admissions, but it was in place by the time the M.Phil. entrance came around, leading to a serious crunch in the ‘general’ category seats. In addition, the fees were low and a system of ‘deprivation points’, which granted extra marks in the university entrance examination to students from ‘backward districts’ and women, was in place. In JNU, I gradually understood the social space of the public university, and its value.

The Social World of a Public University

I found the JNU that I entered to be a far cry from the romantic picture that people often painted of it. For me, it was a space of real social tensions. The social diversity created by the admission system was yet to be accompanied by curricula and pedagogies that could make learning accessible to all. Clearly, only the first step towards the democratization of higher education had been taken. The conversations on inclusion and access that became public only after the institutional murder of Rohith Vemula were indeed long in the making at HCU, JNU and other public universities across the country.

The ongoing caste/class/gender struggles within the classrooms and the university was hard to miss. The usual culminations of students’ journeys through universities like JNU appeared starkly unequal. Those students who were comfortable with Anglophone academia seemed to eventually make their way to Ivy League universities (or thereabouts) and the ones that struggled would start looking for teaching jobs in ‘tier two’ colleges as they trudged along the dreary road to a doctoral degree. The fact that the axes of exclusion and discrimination were multiple and overlapping, and therefore ‘complex’, at times ended up being an excuse for allowing the classroom inequalities to remain.

People like ‘us’, now placed in an unfamiliar demographic setup, were compelled to introspect. Sharing classroom and hostel spaces with students who were visibly short-changed by a violently Anglophone academic culture pushed many of us towards a serious reckoning with ‘our’ places in higher education, and with the meaning of ‘education’ itself. One learnt that social science was useless unless it pushed people like ‘us’ to reckon with their privileges and the ways in which they had been socialised into discriminating. These experiences, in turn, helped ‘us’ make sense of difficult memories stretching back to the school days.

For instance, helping JNU classmates and juniors who struggled to make sense of a lecture in English made one better understand, and regret, ‘our’ insensitivities during school days. Jharkhand, like much of India, is linguistically heterogenous. The state has been home to Hindi, Bengali, Kurukh and Ho, among other Adivasi languages. Many of my classmates in school spoke a mixed tongue and consequently struggled in the language examinations in school which asked for ‘correct’ expressions in a standardized Hindi or Bengali. I felt rather ashamed when I realised that I should have better comprehended my friends’ struggles with languages.

The story of public universities would remain incomplete without a reference to the role of proactive and efficient student unions in enabling a transformative atmosphere. During my time in JNU, student organisations consistently campaigned around issues of social justice and ensured that the OBC reservations got fully implemented. During 2010-11, the students’ union filed RTIs to prove the non-implementation of the OBC reservations and took on an unwilling administration that was nevertheless respectful enough of student organisations to accept their valid demands. This was possible because JNU, being a public university, was subjected to rules of public accountability, a feature sorely lacking in our private universities.

In brief, if subsidies, affirmative action and public accountability have made our public universities socially transformative in a positive way, in keeping with the constitutional ideals, why do these stand politically isolated? Part of the answer lies in the history of Indian liberalism. The heroic Indian anti-colonial movement, which produced a liberal constitution and a liberal polity, had remained deeply marked by caste, class and gender inequalities. The nationalist leadership never posited the universalisation of a free, public education as an urgent agenda for the post-colonial state. The lack of political will for putting in place a genuinely enabling public education is evident in the non-implementation of a Common School System – a tax funded network of neighbourhood schools attended by all children of the respective localities irrespective of their social background – after independence.

Indeed, public universities are what they are because a range of political dispositions – Dalit, Feminist and Left – invested in them as part of the wider struggles against inequality, exploitation and oppression, fought both within the bounds of the Indian constitution as well as outside it. These forces invested in the university less out of an elemental devotion to the constitution and more due to sheer necessity. Education on its own cannot create an equal society but it can provide a firm institutional basis for equality. At the same time, an unequal education that socializes people into discriminating makes the fight against exploitation and oppression difficult by curbing imaginations and practices of equality.

Over the years of neo-liberal economics, the limited gains of the political struggles for equality and the ideological charge of such politics have been partially eroded, as have the political gains in education. Privatization of both school and higher education, and the concomitant renewed institutionalisation of inequalities in and through education, has been increasingly normalised. Under such circumstances, universities such as JNU and their imaginations of equality appear idealistic and idiosyncratic to a lot of people.

One wonders what the way ahead is. By the look of things, we are yet to fully understand and politicize the real human impact of privatisation, in the form of transfer of wealth from the poor to the rich through high fees, indebtedness caused by educational expenses, the effect of extreme competition on children’s mental health, and so on. The negative impact of privatization has been far form uniform. The poorer classes have borne the brunt of it, in the form of denial of quality education, perverse experiments in pedagogy and assessment conducted by private agencies (in the name of ‘quality’ education, no less), and discrimination within the classroom spaces.

The mechanisms by which the so-called ‘state-corporate nexus’functions are yet to be adequately understood and politically challenged. The complete secrecy with which these networks function and the utter lack of public accountability pertaining to their operation makes it more difficult to track them. While institutions such as Jio University are rightly ridiculed, less is known of the massive investment that serial violators of law and human rights such as Vedanta have in the spheres of health, education and culture. Indeed, the Company Raj seems to be using the moral and ideological charge of education in order to legitimise itself. How can it allow spaces such as JNU to exist in all their splendour?

Akash Bhattacharya is a JNU alumnus and currently teaches history and education in a private university.