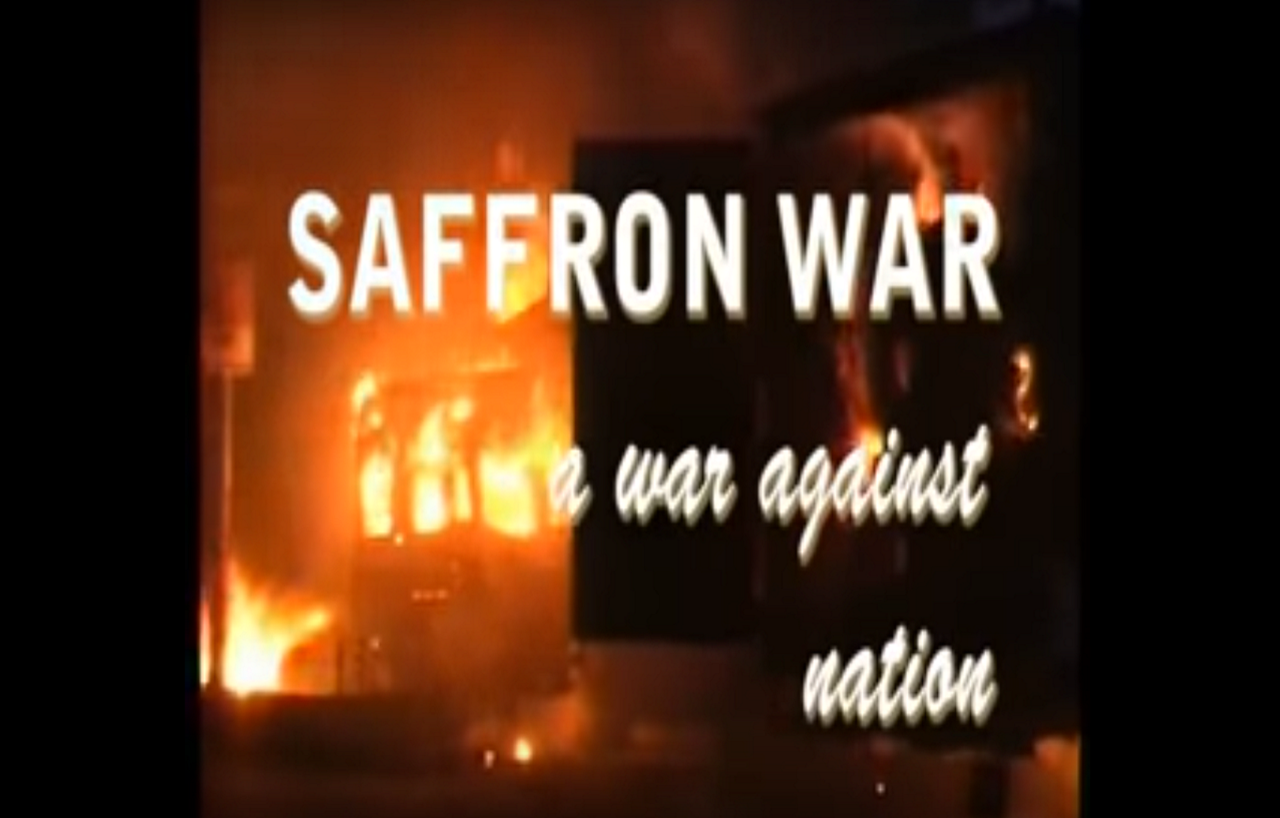 Saffron War is a 2011 documentary which focused on the growing communalism in the town of Gorakhpur and nearby areas in the Gorakhpur division. Zeeshan Husain writes about the relevance of the documentary film in the present political scenario.

Saffron War is a 2011 documentary film which focused on the growing communalism in the Gorakhpur division in particular and eastern Uttar Pradesh in general. Directed by Rajeev Yadav, Shahnawaz Alam, and Lakshaman Prasad, then new entrants into the world of documentary film-making, the documentary takes a detailed view of the town of Gorakhpur and nearby areas in the Gorakhpur division. These three young men must be applauded for daring to make a film on Yogi Adityanath and his activities. Made in 2011, Saffron War is even more relevant now than it might have been eight years ago. Yogi Adityanath is, at present, the Chief Minister of Uttar Pradesh, and the Bharatiya Janata Party (BJP) has started its second term in the Parliament. Slowly, the discourse of the Sangh Parivar is becoming normalised, and we are marching towards an Israel-like ethnic democracy (Jaffrelot, 2018). An ethnic democracy is a democracy which, on paper, accepts the equality of all citizens but in practice considers only one religious group (the Jewish people in the case of Israel) as true or legitimate citizens. The film has a deep desire to prevent such a process. It fights for a multicultural India which has been envisaged by its founding fathers. The fight is getting tougher.

Yogi is a Hindi word which means saint. Yogi Adityanath is the chief priest (or mahant) of the Gorakhnath math situated in Gorakhpur. Gorakhpur takes its name from the medieval saint Gorakhnath after whom the math is also named. The film elaborates on how the tension between his supposedly other-worldly sainthood and his political ambitions is managed (rather, manipulated) by Adityanath. There are definitely two contradictory strands within this brand of politics. The first is his sainthood, which entails his leaving worldly activities and working for the spiritual well-being of oneself and others. The other strand is signified by Adityanath and his two predecessors, namely Digvijay Nath (member of Hindu Mahasabha, and Member of Parliament from Gorakhpur constituency in 1967) and Mahant Avaidyanath (MLA from Maniram and MP from Gorakhpur). This strand deals with the union of politics and religion.

Saffron War shows us clearly that Yogi Adityanath’s style of politics has violence against Muslims as a disturbing core agenda. Interestingly, this goes against the teachings of Saint Gorakhnath (10th-11th century) and the history of the Gorakhnath temple itself (Habib, 2007). Interviews of various journalists, scholars, and historians tell us that Saint Gorakhnath’s teachings were filled with lessons of humanity and compassion. India under the Sultanates was without the ill-feelings of communalism. The temple, in fact, had Muslim fakirs and singers till late 1950s. The area — Gorakhpur division — was once a place filled with the teachings of Gautam Buddha and Kabir. Communalisation of the place began after the mahants started joining politics and opted for gradual riddance of Muslim mendicants from the temple (Rudoph and Rudolph call it ‘modern hate’). One expert tells us that the acres of land which the temple owns were actually a gift by Asaf-ud-Daula, Nawab of Awadh. The syncretic tradition was slowly eroded in post-colonial India. Violence against Muslims is now projected as an act of self-defence. Young minds are indoctrinated with booklets that teach that Islam cherishes violence against Hindus. There is an organisation called the Arya Veer Dal where young boys are trained to use wooden sticks, swords, and other simple weapons in the name of self-protection. There are videos of youth members of the Hindu Yuva Vahini (HYV) speaking about protecting “Bharat Mata” from Muslims. The overall performance is such that it would terrorise not only Muslims, but anyone who want to exercise their freedom of expression; the right to disagree. Most of them are unemployed and from poor families, and are seen flashing swords and shouting – “Hindustan mein rehna hoga to Yogi Yogi kehna hoga! (If you want to live in India, hail Yogi!)”. Such fiery slogans echo deep into the hinterland and clear the path for the militant form of Hinduism to invade hitherto peaceful, rural UP.

It is here that the film could have touched upon why the image of sainthood is used and how it conceals the issue of development. What is the agenda for developing the Gorakhpur division which consists of four districts, namely Gorakhpur, Kushinagar, Deoria and Maharajganj? Will the mahant and present CM of UP be ready to build schools, colleges, industries, roads, canals, hospitals, provide 24×7 electricity, provide loans to farmers, give various safety nets to peasants, distribute land to the landless, provide scholarships to students from poor backgrounds, make local bureaucracy hassle-free and make public transport more convenient? Let us ask what the agenda of the RSS and its sister organisations for development. Eastern UP happens to be among our country’s most backward regions, and Gorakhpur is one of its most backward districts as per government documents. Unemployed youth is a ‘demographic dividend’ for a flourishing economy, but instead they are lured to join organisations like the Hindu Yuva Vahini to sustain poverty and inequality. There is still substantial control of Brahmins and Thakurs (Adityanath’s caste) over rural Poorvanchal (Hasan, 1988). The film could have focused more on this. Similarly, most of us fall trap to the Hindutva agenda of othering Muslims, without even mentioning that other religious minorities like Christians, Sikhs and Buddhists also suffer communalism on an everyday basis. When strong Hindu-Muslim binary opposites are (re)created, the popular perception is created that even Sikhs and Buddhists are “effectively” Hindus. The film could have tried to highlight the Buddhist history of the region and how ‘little traditions’ still break this Hindu-Muslim as antagonistic life experiences.

Related to the issue of development is the issue of socio-economic inequality based on caste and gender. The film has passing mentions but not a sound description of the slowing down of caste-based movements and parties. In present times, we have data to show that structural (material/economic) oppression of OBCs and physical violence against SCs are still high. Indeed economic inequality between castes is increasing (Srivastava, 2017), and atrocities against Dalits are also on the rise (The Indian Express 14th April, 2018). The film could have asked why lower caste parties failed to engage with the youth, and why even Dalits, except Jatavs and Chamars, are leaving the Ambedkarite project and joining the saffron war (Narayan 2009; Bellwinkel-Schempp 2008). As per a CSDS 2019 post-poll survey, almost half of the non-Jatav Dalits voted for BJP, and more than two thirds of (Hindu) OBCs voted for BJP. When it comes to voting for the BJP, laboring castes (SCs and OBCs) were labelled as militant Hindus, but when it comes to recognizing their economic rights they are ignored as Shudras and ati Shudras. (In relation to this, the reader is encouraged to consult the essay by Joel Lee to understand how the Valmikis of Lucknow were pushed to accept Hinduism). The film could have shown how some small Ambedkarite groups and Marxist associations are, if at all, working towards communal harmony (see the movie Sangharsh by Nicolas Jaoul for this).

The last and most important issue is that of women. A member of the Hindu Yuva Vahini openly calls for raping the corpses of Muslim women. There is a small yet heart-rending interview in the movie of a Muslim mother-daughter duo, survivors of gang rape. Adityanath himself is seen objectifying women in many clips. He calls for “taking (read abducting) 10 Muslim girls for every 1 Hindu girl taken (read married to a Muslim man)”. The purpose is clear: to terrorise any potential dissident. If one delves a little deeper one will see that in actual practice women are often pushed to marry against their choice by their own fathers and (elder) brothers even within the religion. Religious conservatism depends very much on the subjugation of its own women. The film could have shed light on how women are trained to be docile in the garb of maintaining the honour of family, caste and religion, that forms one of the key tenets of the right wing politics in India (Iyenger, 2017).

Bellwinkel-Schempp, Maren. “The Khatiks of Kanpur and the Bristle Trade: towards an anthropology of man and beast.” Sociological Bulletin, September 1998: 185-206.

Zeeshan Husain is an independent researcher working on society and politics in Uttar Pradesh.