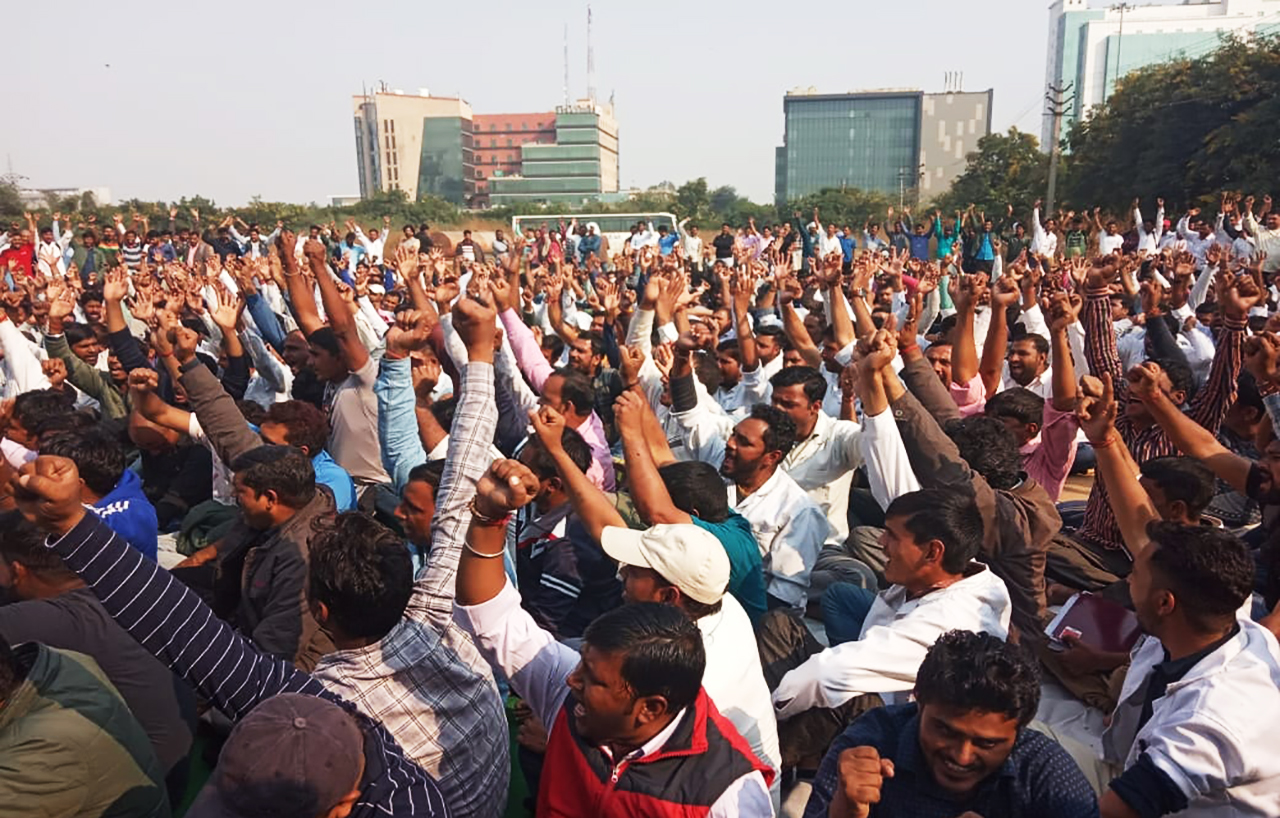 The Historical Struggle of Contract Workers in Manesar Honda

What had begun as a mark of resistance by Honda’s contractual workers against the management’s decision — asking 650 of them to proceed on a three-month-long leave on November 5 citing slump in consumer demand — gradually snowballed into a full-fledged “workers’ movement”.  A report by GroundXero.

On 22 November, several thousand workers of the Honda Motorcycle and Scooter India (HMSI) plant in Manesar, along with workers and union members of several other plants, organised a 22 kilometre long rally from Industrial Model Township (IMT) Manesar to the Deputy Commissioner’s (DC) office in Gurugram. The workers declared they would further intensify the struggle if they don’t get justice. Almost 2,500 workers participated in the rally, walking from IMT Manesar to Gurugram in three and a half hours, all the while in high spirits. Apart from the Honda workers, union leaders and workers from Maruti, Honda 2F, Napino, Munjal Showa, Hi-lex, Daikin, AG, and Rico joined the rally. 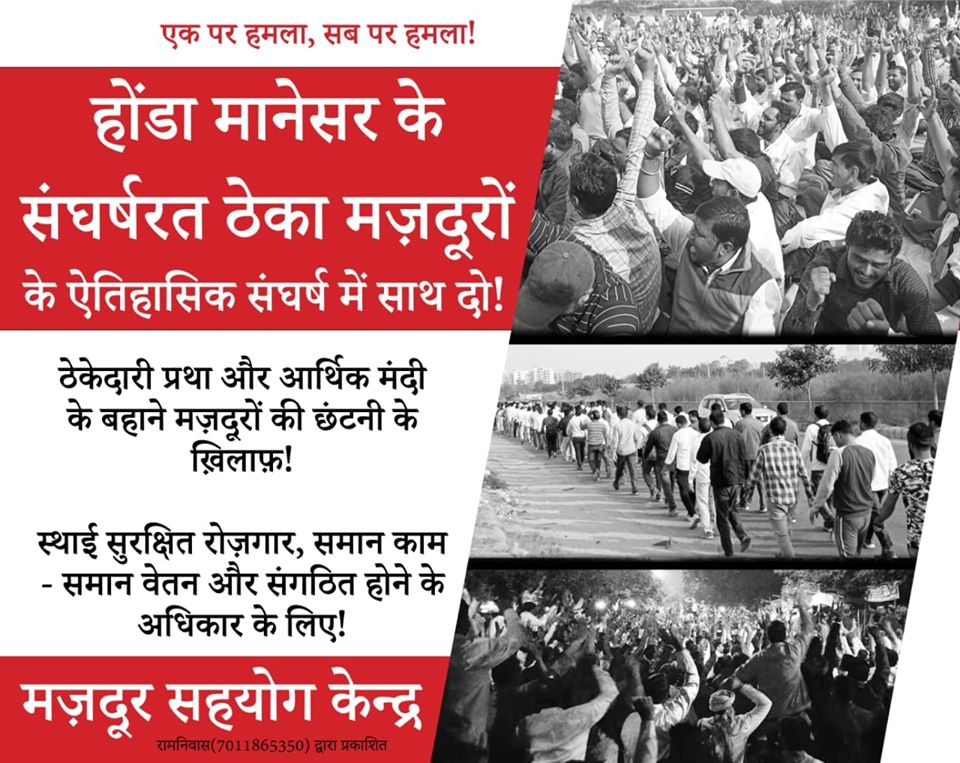 Close to 1,500 contract workers from the Manesar plant of HMSI are fighting a long battle against the company after hundreds of them were laid off on 4 November by the management, who cited a fall in demand due to economic slowdown. The production in other Honda plants in Rajasthan, Karnataka, and Gujarat are running at almost full production, and at times overtime. Thus, invoking an ‘economic slowdown’ is disingenuous. Rather, the move should be understood as an ill-intentioned attempt to retrench old contract workers and deny them their right to permanency.

HMSI, like every other manufacturing company in the country, used the industry-wide standard tactic of making the contract workers rejoin after every eleven months so that even after working year after year in the core production division, they would not be made permanent employees. For many of the contract workers in HMSI, the next rejoining date was in March 2020. Hence, 4 months prior to this date, the management laid off close to 650 workers overnight . Many of these workers had been working at HMSI for over a decade.

On 5 November , the sacked workers staged a protest outside the factory gate and close to 1,000 of them stopped production inside the plant and staged a sit-in strike. The management tried to keep the production going using permanent workers, but at most 100 to 150 vehicles were manufactured per day over the next two days. Many of these vehicles were in fact faculty and had to be sent for repairs. From 7 November, production at the Manesar plant had stopped completely while the sit-in strike by the contract workers inside the plant continued. 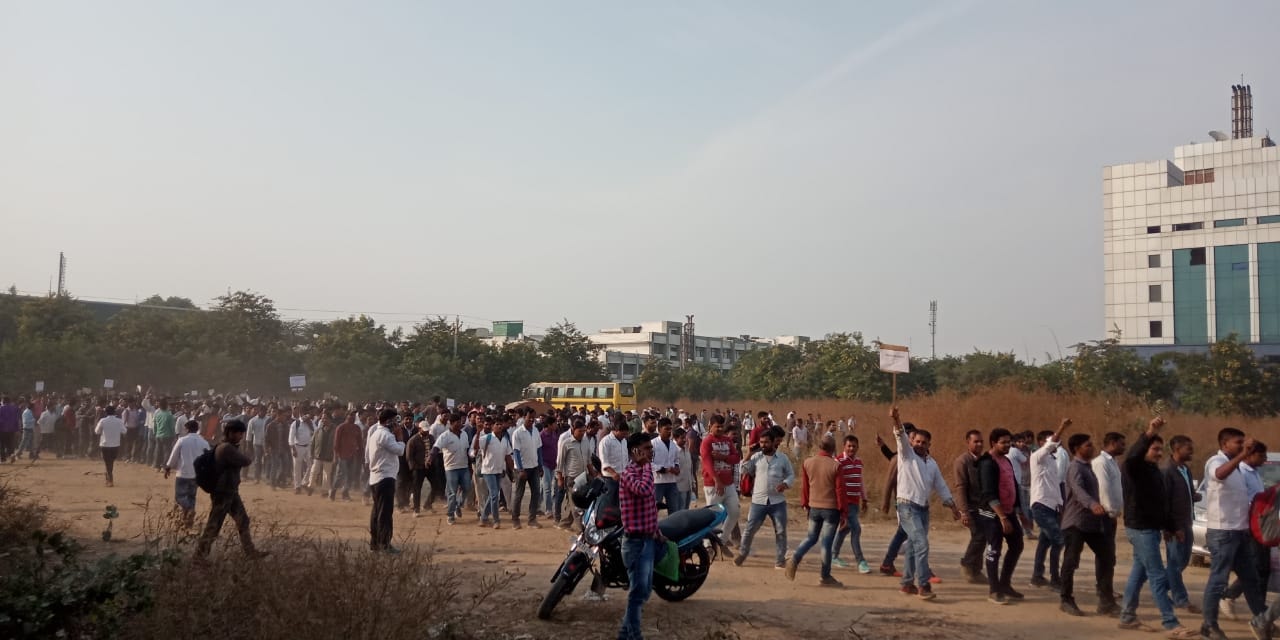 The Honda management subsequently announced that the Manesar plant would be shut down from 11 November. A notice for the same, issued by the management on 10 November , said “Due to the prevailing IR (industrial relations) situation, plant operations have been suspended and the plant will remain closed till further intimation.” This was done to put pressure on the striking contract workers and drive a wedge between them and the permanent workers. But the permanent workers union soon joined the strike and announced their support for the contract workers struggle.

From 5 November to 18 November, the contract workers stayed inside the plant and continued the strike. The Honda management tried a number of tactics to break the strike and humiliate the workers inside. They locked all but one toilet and stopped the supply of food from the canteen. Drinking water and washroom facilities too were taken away. Many of the workers fell sick during these two weeks and had to be admitted to hospital. 33 workers contracted dengue as well.

“The production in entire Manesar will come to a halt if your demands are not met. Be firm. If the Honda management stops supplying food to the striking workers inside, we will make alternative arrangements. Let’s take this fight to a logical end.” – a union leader from Napino Auto and Electronics Limited addressing the striking workers of HMSI. 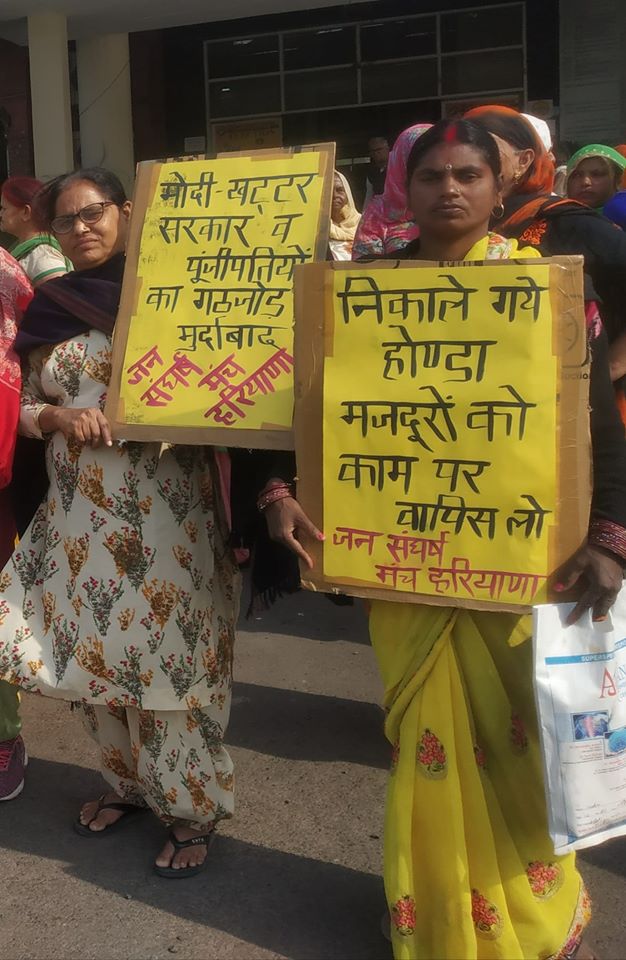 The contract workers continued their strike in these adverse conditions, occupying the plant , while the 650 contract workers who were laid off continued their protest outside the plant gate . Due to an old order from a civil court, assurances of negotiation from the administration, and at the insistence of the supporting unions, the striking contract workers reluctantly agreed to vacate the plant premises on 18 November and joined the other protesting workers outside . But leaving the factory premises diluted the pressure. The company management has refused to join any negotiation process for a settlement. Rather, the company management on 22 November issued a notice to resume production from 25 November and has asked all workers except the retrenched contract workers to join duty after signing good contact bonds. The contract workers demands are clear. They want the 650 contractual workers let go of by the company to be recalled or be paid a compensation of ₹1 lakh for each year of service, adequate compensation for last 18 days, and regularisation of their job.

“Our demand is simple. Regularize all those who have been working for more than 10 years and duly compensate the retrenched workers. The company has opened three new plants over the past 15 years, it is all our hard work,” – a contractual worker of HMSI.

Representatives of the contract workers and the permanent workers’ union are in discussions with the administration and the labour department. The workers, however, were determined to carry their struggle forward and had asked all the trade unions from Gurgaon, Manesar, Dharuhera, Bawal, and Neemrana to join in a rally from IMT Manesar to the Labour C ommissioner office in Gurugram on Friday, 22 November.

This struggle has a historical importance as it marks the first time that contract workers occupied a factory for 15 days and brought production to a complete halt. In spite of intense exploitation and repression, there have been very few instances (like in the cases of Daikin and Omax, for example ) in the Gurgaon-Manesar-Bawal belt when contract workers waged militant struggles to fight for their rights. The ongoing economic crisis has had its most severe impact on the lives of contract and casual workers. Thousands of workers are being laid off in industrial belts all across the country but no coherent struggle has emerged to fight this injustice . In such times, the struggle of the Honda workers shows that if the government and capitalist class think that working class will continue to silently bear the brunt of economic crises, they are mistaken.

“We are truly inspired by your resistance for the protection of your rights … We salute you and we stand united in solidarity to your cause,” – statement, signed by Fidel Gavilian, coordinator of The European Workers Platform (EWP), a trade union platform, representing unions of Honda in Europe.

The contract workers in Honda are highly skilled and experienced. All of them have been working in the Manesar plant since 2014 and in fact, many have been working from as far back as 2008. Till 2015, during every rejoining, 50 workers were made permanent on the basis of a test and seniority. But in the last four years the test was not conducted and this year even the seniority- based permanency was not done.
In fact, after 2014 many contract workers were actually laid off after 11 months and many were only taken on year-long contract. Last August, around 800 contract workers were laid off without bonuses or compensation. Management had given them false assurances that they will be taken back after some period but that never happened. Since 2018, salaries of contract workers have been delayed for up to 3 months (a phenomenon witnessed even in the automobile sector in Tamilnadu) and in the last 2 years, around 800 NEEM (National Employment Enhancement Mission) workers have been hired. These NEEM trainees are given only Rs. 11, 000 per month out of which half is paid by the government. Clearly this is far more beneficial to the company as contract workers have to be paid Rs. 16,000 per month. Since 2016, there has been no increment in the salary of contract workers.

We need to remember that the permanent workers formed their union in 2005 after a heroic and militant struggle. During that time, their monthly salary was Rs. 6,500, which thanks to their collective bargaining power, now has increased ten-fold to about Rs. 60,000 –70,000 per month. In 2008 and again in 2010, contract workers in Honda had waged struggles involving hunger strikes and stoppage of work protesting low salaries and their ill treatment by the management. But this time, as their jobs were in danger they decided to revolt. 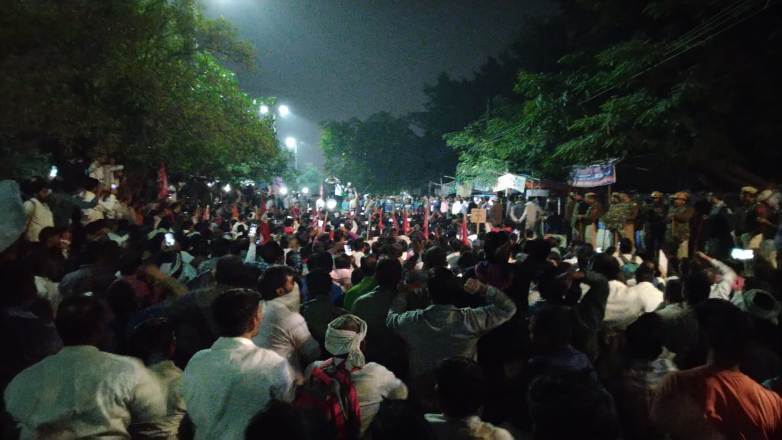 After yesterdays show of strength and class unity, it remains to be seen how this struggle will develop and where will it end. The contract workers have got support from the workers of HMSI, Bellsonica, Maruti, Munjal Sobha, Rico, Sunbeam, Daikin Nimrana, Hi-lex, Napino Bajaj, and other unions in the belt. Several other organizations like Mazdoor Sahyog Kendra, Inquilabi Mazdoor Kendra, Bigul Mazdoor Dasta, Mazdoor Sangarsh Samiti Alwar and others also participated in the rally and are actively supporting the workers struggle on the ground. The working class today needs to wage a sustained and united struggle against the (anti) labour laws, the increasing contractualisation of labour, and the anti-workers policies of the capitalist class and the government. If the ongoing struggle of Honda contract workers can create a spark among the workers in the important Gurgaon-Manesar-Bawal industrial belt then it would have played an important role at an important juncture.