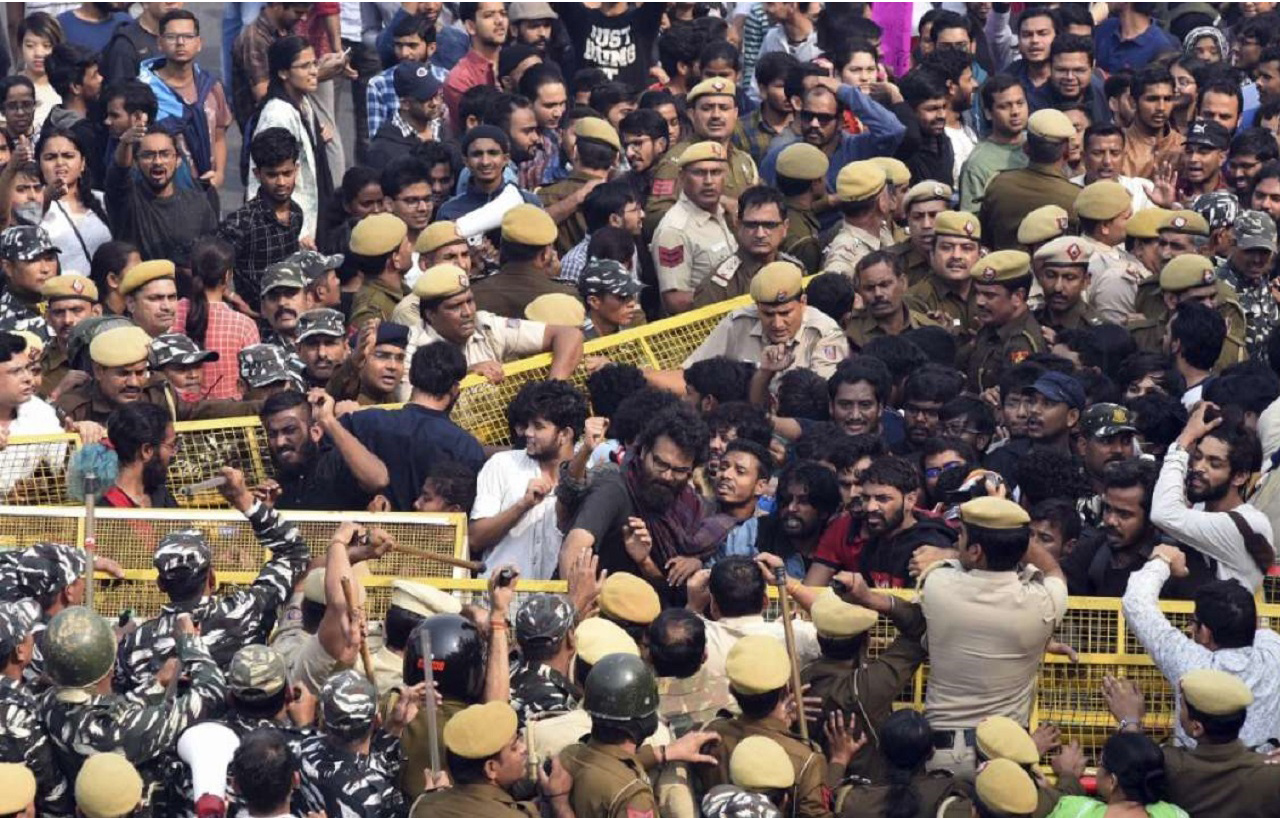 Students of Jawaharlal Nehru University (JNU) have been protesting for nearly last three weeks against the draft hostel manual, which has provisions for massive hostel fee hike in addition to dress code and curfew timings. The JNU students are demanding a complete rollback of the hostel manual. Writes Suchishree Chatterjee.

The university administration has justified the hike by saying that fees were not revised for 19 years while the protesting students are citing university’s annual report to point out that 40% of the students comes from lower-income groups and will not be able to afford the hiked fees.

Since M. Jagdesh Kumar was made the Vice Chancellor of JNU, systematic attack on student rights has become a new normal for the university. Recently JNU library has seen major fund-cut and many important journals have been unsubscribed. In 2017 there was a massive seat cut in research and most of the social science departments did not have any new admission in M.Phil/ Ph.D courses for two whole years. Gender Sensitization Committee against Sexual Harassment (GSCASH) has been discontinued and serious charges against known abusers and molesters have been dropped just by the virtue of their allegiance to VC and the BJP government.

Since its establishment, JNU has been one of the champions of public sector education in India where students from extremely marginalized sections of the society could come and study at affordable tuition fees and hostel charges. JNU had provisions like special deprivation point system for admitting women, Dalit and Adivasi students and policies like these have shaped the campus as an inclusive and democratic space as opposed to elite and exclusive private universities. However, in the recent years deprivation point system has been scrapped and democratic culture of the campus has been targeted. The library which used to be open all night for the students is now to be closed at 11:30. These systematic attacks on JNU are even more emboldened with rising arrogance of the BJP government following the Ajodhya verdict and scraping of article 370 in Kashmir. Recently Ministry of Human Resource and Development (MHRD)  has announced moving towards ‘autonomy’ for many public institutions including IIT’s, which roughly translates to withdrawal of all public funding from these institutions. This has already led to massive fee hike in the IIT’s and increasing number of drop outs from the public universities.

The controversial draft hostel manual in JNU was passed almost unanimously by the VC and his cronies. The lawfully and democratically elected Jawaharlal Nehru University Student Union (JNUSU) was not even allowed to be present there. The Jawaharlal Nehru University Teachers Association (JNUTA) members were not informed of the venue of the Academic Council Meeting, which was not held within the university campus. The VC has never encouraged dialogue with the students. So far, he has refused to meet with any protesting student and has the audacity to state that ‘dialogue cannot be initiated through coercion!’ The hostel manual was passed undemocratically. Even when three Provosts resigned after sustained protests, the VC and his cronies termed the student movement as ‘coercion’ led by ‘a handful of students’.

However, to stop the students from marching to the Parliament, there was a huge deployment of CRPF and police forces in JNU campus on 18th November (2019). Since the night of 17 November, all the gates of JNU were blocked and Sec.144 was declared in the entire area. When protesting students continued their march despite the barricades, there were brutally lathi-charged.  Delhi Police had closed all four metro stations near the venue of the protest gathering in Jorbagh and carried out unprovoked lathi-charge on protesting students after switching off the street lamps. Students alleged, they were attacked with blades, razors and pins. A visually handicapped student was beaten so brutally that he had to be admitted in AIIMS. Women protesters alleged they were molested. Even JNUTA members were beaten up by the police. The police atrocities on protesting students were entirely uncalled for. 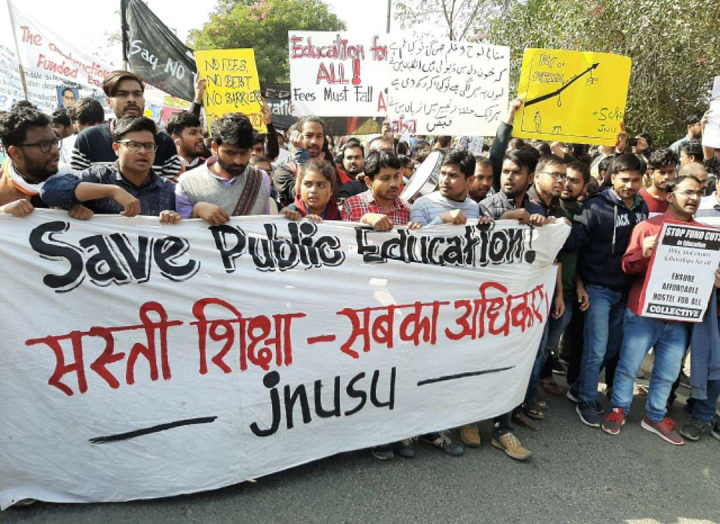 After the protest, the MHRD has announced a three-member committee to discuss the fee hike issue with the students and all other stake holders, and recommend ways to restore normal functioning of the university. However, seeing the latest attempts of the administration to side track the movement with false propaganda of ‘major roll back’ in the fee structure has made the students suspicious about possible motives of MHRD. The ‘major roll back’ announced by the administration was nothing but a farce, since the students still had to pay for utility bills and salary of the sanitation workers – which comprise bulk of the fee hike.

Fee hike in JNU is to be seen as a move by the government to privatize public education. The Brahmanical government is hell bent on pushing all non-upper caste and non-upper class students out of education. The sustained ‘shut down JNU’ online campaign carried out by BJP stooges is nothing but an attempt to shut down affordable and inclusive public education institutions altogether. Shutting down JNU, which has time and again stood for social justice and inclusivity is seen as a final symbolic victory for the Brahmanical forces in the country led by RSS-BJP-VHP nexus.

The author is an ex student of JNU and presently a research scholar at IIT Bombay in the department of Humanities and Social Sciences.