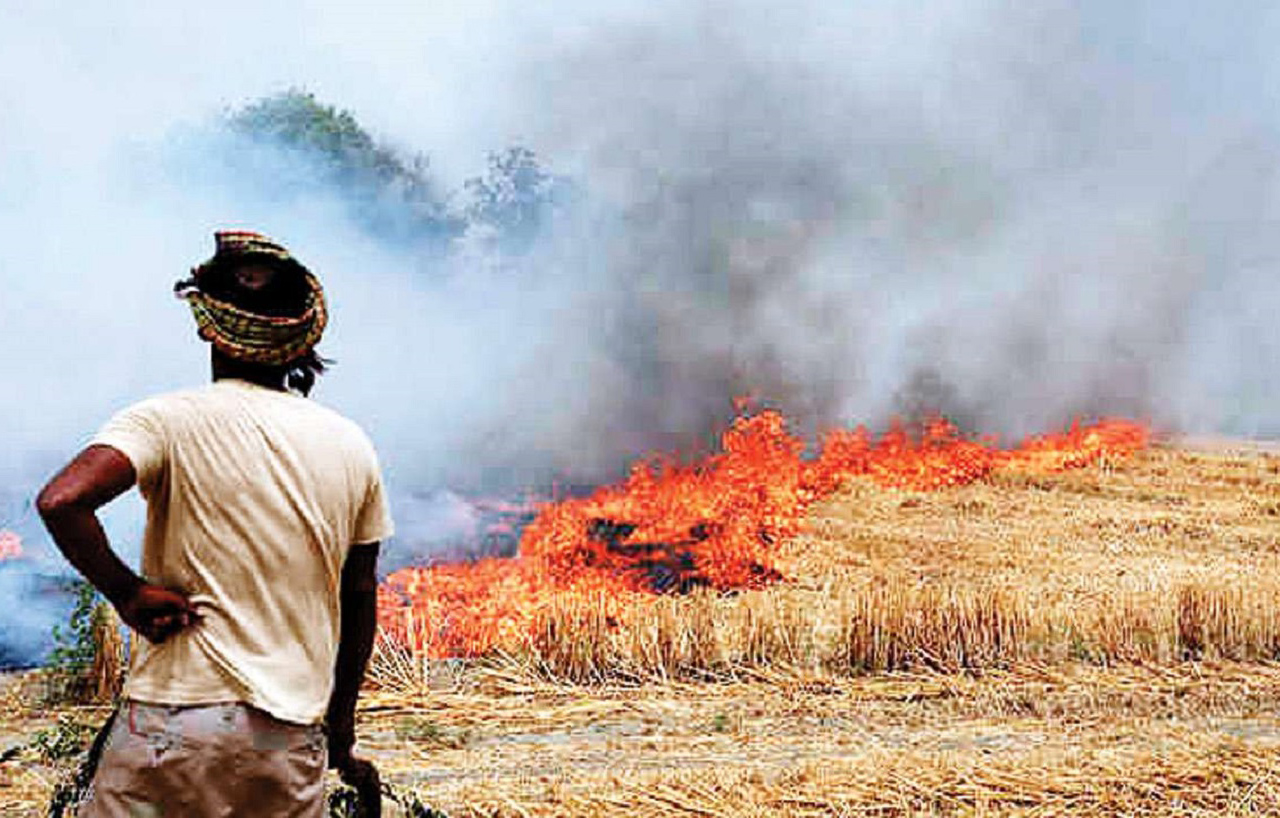 Stubble burning by farmers in Punjab and Haryana in northwest India has been cited as a major cause of air pollution in Delhi and its surrounding region. The practice of stubble burning has it’s roots in market forced pressure on the farmers. The permanent solution for the problem and the overweening ecological crises is to go for crop diversification. Amol Singh writes.

North India has not seen a clear sky since Diwali. People are gasping for breath and struggling with eye burning. Condition in NCR is worse, according to a study air pollution is responsible for 10,000 to 30,000 deaths per year in Delhi alone. Another report from 2015 revealed that every four out of ten children suffered from “severe lung diseases” in Delhi. This is the fifth year running that a layer of detrimental smog engulfed North India in October-November. Air Quality Index, which is supposed to be good at 50 ppm (parts per million) by moderate accounts, has crossed 500 in NCR—termed as “severe-plus” quality level of air. Health emergency has been declared by the state government. Supreme Court reprimanded state governments for failing to curb pollution.

It is claimed that 46% of this pollution is contributed by the stubble burning in Punjab and Haryana. Delhi Chief Minister is asking school children to write letters to ‘Captain Uncle’ and ‘Khattar uncle’. NCR itself has swathes of industries whose pollution remains unchecked. But as these small and medium sized industries provide cheap products to the bigger global corporations by flouting pollution and labour laws, they will remain unscathed for the sake of providing ‘investment friendly environment’ to big corporations. However, the stubble burning is undeniably one of the major reasons of the degraded quality of air. But the ecological crisis related to Green Revolution model of agriculture goes much deeper than the current burning issue of smog.

Indian government has set Minimum support price for crops but in most parts of India there are no government procurement agencies to buy the harvest, the prices of crops are decided by the price in International food market. Surprisingly, some state governments start procuring the crops when price in International market rises above the MSP set by government. Haryana and Punjab are the two states where the government procurement agencies are working and have presence all over the state. On the other hand, the farmer organisations mostly affiliated to left parties have succeeded in maintaining a constant pressure, over the years, on the state governments to procure all the wheat and rice produced. But as these agencies (Food Corporation of India, Ware House departments, etc.) only procure wheat and rice, it becomes mandatory for the farmers to cultivate only these two crops that will be sold at a fixed price relatively independent of the fluctuations of the international food market.

There is little time span between harvesting of rice and cultivation of wheat.If cultivation gets delayed it impacts the yield negatively, therefore, the income declines. To clear the field of the residue, the stubble, the quickest method is to set the stubble on fire. The method suggested by governments is to leave the residue there to get absorbed into the soil, but it takes weeks for the stubble to decompose and this results in delay in the cultivation of wheat. Second suggestion is to use the machinery that makes it possible to cultivate without clearing off the field. But these methods have repercussions on the yield that are impossible to bear by the small and medium farmers, as agriculture is losing its viability in the face of globalization of the market. Secondly, these machines cost in lakhs, are out of the reach of the farmers, and if the farmer rents the machinery, the rent eats upon the income of the farmer. In this scenario, the only feasible option for the small and medium farmer (86.2 percent of farmers own less than 2 hectares of land) to earn a sustainable income without impacting the yield is to burn the residue.

The market and the degradation of human life and environment

The Ford/Rockefeller foundations’ project, so-called Green Revolution, was adopted by a number of global south countries in 1960s to increase their agricultural production. They developed high yielding seeds of wheat and rice that increase the production up to 10 times. Mexico was their first laboratory for the wheat experiment and Philippines for the rice experiment. But these science laboratories’ developed seeds needed a bundle of objective conditions to sustain the production. Extensive use of fertilizers, pesticides and insecticides, along with controlled irrigation were necessary for the success of this model of agricultural production. For this particular reason, multi-national corporations like Monsanto, Cargill and Bayer had deeply rooted vested interests in this project, as this project developed the countries of global south as huge markets for their chemical products and seeds. In India, Punjab, Haryana and eastern Uttar Pradesh became the target of this product partly because they had a well established canal system that can fulfill the needs of controlled irrigation. With state subsides on the agricultural equipment, fertilizers and pesticides, this project was a success in the ‘70s. Subsidies on fertilizers and pesticides were given indirectly to the private/co-operative manufactures to keep the price low. As the cropping area for these projects spread, the agricultural cycle was stuck with the two crop cycle of wheat and rice, as the other crops’ meagre yield was not comparable with the produce of these crops. This cycle of two crops destroyed the production of other native crops, which were grown with minimum chemical use.

On the other hand, a system to procure the wheat and rice was established by the state government, with limited interference of the market, to stock the godowns for the public distribution system. The aim was to encourage the farmers to cultivate these two crops to decrease the dependence on the imports of wheat and rice, and tackle the ‘balance of payment crises’. Although, after the liberalization of the economy the PDS is on its last leg, somehow the mass farmers’ movements of Punjab and Haryana have succeeded in keeping the system of procurement intact in corresponding states. It is the pressure by these farmers movements to get a fixed price for their crop and full subsidy on the electrical power (in Punjab) that makes the agriculture more viable(if we take into account the cost incurred for one crop including just the short term investments, like chemicals, seeds, etc.) than other states in India and somewhat prevents the farmers to join the ranks of footloose labour—indulging in seasonal migration and still clinging to small plots of the land.

This cycle of cultivating only two crops had a detrimental impact on the humans and the environment. The Green Revolution in these two states has made agriculture dependent on excessive usage of pesticides and weedicides, as the variants of seeds that were introduced were not compatible with the local environment. Furthermore, rice cultivation was introduced in these states for the first time, that resulted in depletion of ground water at an exponential rate. Canal based irrigation from the earlier phase became insufficient and today the use of groundwater for rice cultivation has jeopardized the natural underwater resources.

Although, at first green revolution increased the productivity, but as productivity stalled,land got fragmented and the investment on inputs—machinery and pesticides/weedicides/fertilizers—increased. These investments needed capital in substantial amounts, which started the vicious cycle of debt, ushering the cycle of farmer suicides. Moreover, excessive use of fertilizers, pesticides and insecticides resulted in accumulation of toxins in the sand, water, food and ultimately leading to bio-accumulation in the people of these states. There is a huge chunk of area in the Malwa region of the Punjab that is known as Cancer Belt. This particular region cultivated the third crop that the government used to procure—cotton. Monsanto introduced the BT cotton seeds that had high yield but needed such high amount of pesticides and insecticides, that turned the whole region into a living hell. There is a passenger train from Bathinda to Bikaner (Bikaner has a cancer research center and hospital), which is known as the Cancer express.

Stubble burning also has it’s roots in market forced pressure on farmers, which made them to get as much yield as possible from the limited sized plots—with the extensive use of fertilizers, pesticides and weedicides. In the growing non viability of agricultural practices, a loss in yield can push them to take more debt. It is the same logic of profit in market that propels them to exploit and imperil their land, water, environment and lives, which makes them to burn the stubble. Farmers have only two options – either to produce enough to sustain themselves by any means possible, or sink in more debt. Furthermore, the jobless growth of last two decades and highest unemployment in last 45 years adds more pressure on the farmer families to anyhow eke out their living from the small plots.

The permanent solution for the stubble problem and the overweening ecological crises is to go for crop diversification. It needs extensive state support, but on the contrary, it seems that central government is pulling its hand back from providing the minimum support price from wheat and rice also. For the other crops farmers get the open market price, while competing with big agriculture corporations. Although, the problem at hand can have a temporary solution in incentivising the farmers who do not burn the residue, but the wider ecological crises need to tackle the market forces. Only a government with the intention of fighting against a capitalist system can provide a solution. The present issue of smog is just the blow of hot air reaching Delhi, which originated from the decades old inferno of market ruthlessness. Perpetual race to run after profit to sustain in market is central to capitalism, whether it is industry or agriculture, and it has deleterious impact of the environment. The solution for global warming, melting glaciers, rising sea levels, to the air pollution in north India cannot be envisioned without putting up a strong fight against the market imperatives of capitalism.