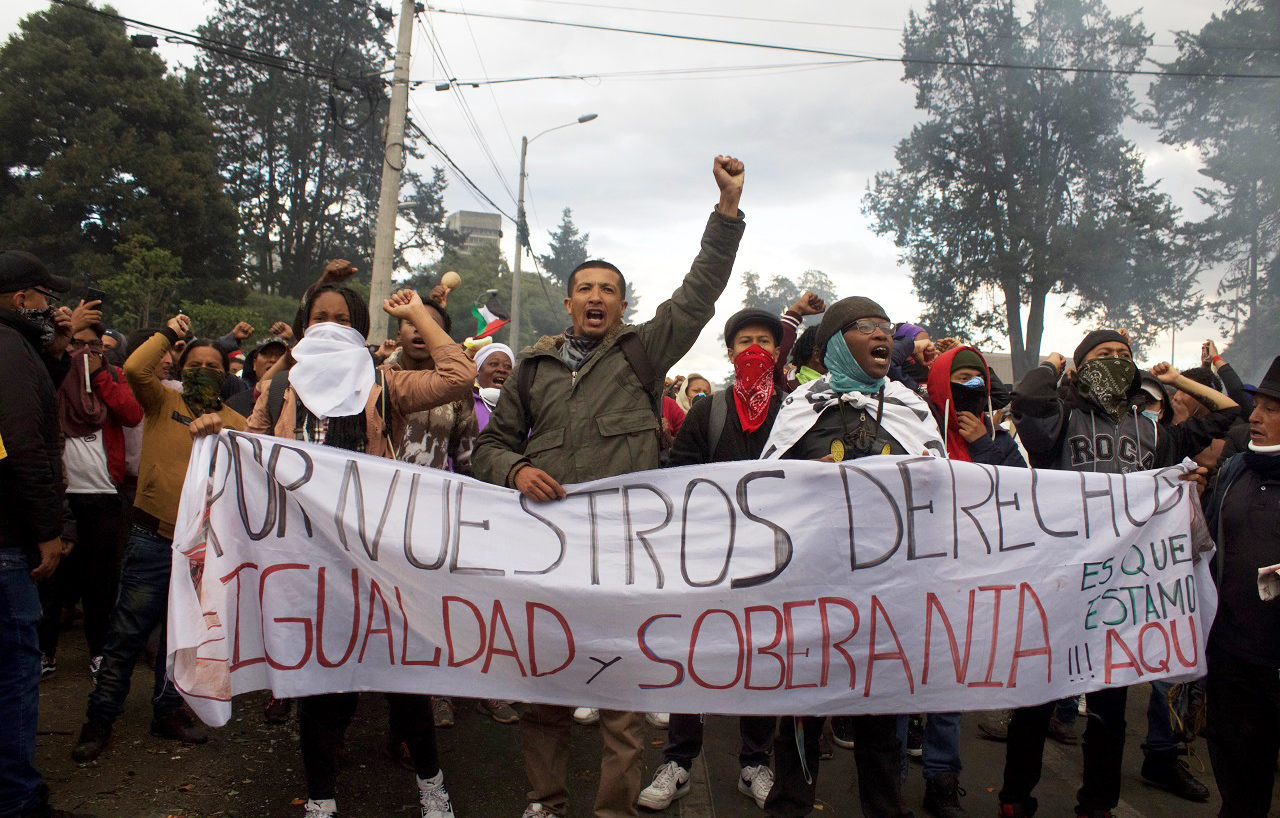 The indigenous communities, diverse social movements, trade unions, peasants and students in Ecuador are vociferously opposing the Moreno government’s decision to cancel fuel subsidy and to impose IMF dictated austerity package. The violence seen on the streets of Quito, and elsewhere in Ecuador is the legitimate reaction of the population to measures imposed on them through undemocratic means. The only way to de-escalate the crisis is to revoke the fuel price hike which Moreno has refused to do untill now. A report by Utsa Sarmin from Quito.

“Hijos de puta”- shouted a protester while running away from constant shelling of pepper gas by Ecuadorean military police on this Wednesday. Soon the gas cleared away and another wave of protesters armed with stones and makeshift shields started approaching the police. Another group, crouched behind the shielded protesters hastily fired a rocket that landed beyond the police barricades with a deafening sound. Immediately a barrage of tear and pepper gas landed among the protesting crowd causing panic, coughing, burning and the curse “Hijos de puta!”

“Hijos de puta!”, which means “sons of a bitch” is a widely heard phrase on the streets of the Latin American country Ecuador during the ongoing protests. From urban protesters to tens of thousands of rural Indigenous people have gathered in the capital city Quito to protest against “Paquetazo”, a package of austerity policies announced by the Ecuadorean President Lenin Moreno to comply with suggestions presented by the International Monetary Fund (IMF) in exchange of billions of dollars of loan. 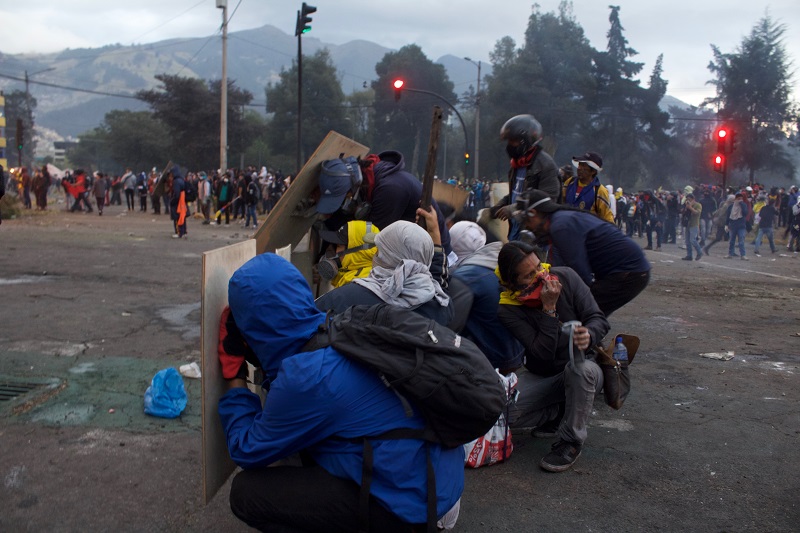 The austerity measures entail: cancellation of 4 decade old fuel subsidies, 20 percent salary cut of government employees, 10 to 20 years of tax relief for wealthy investors, changing laws to accommodate employers who do not want to compensate workers for putting in extra hours, lower tax on taking money out of the country, taking away 15 days of vacations that employees are entitled to every year.

However, Moreno’s neo-liberal economic policies started long before the IMF deal. Once a trusted ally of the leftist ex-President Rafael Correa, Moreno abandoned his policies soon after coming to power. “Shortly after Lenin got into power, he started meeting heads of conglomerate media and banks and people with big companies, not entrepreneurs. He started laying the scenario that there is a crisis and we will have to get in debt, we will have to loan money,” explained Valerie Carmel, an activist with Desborde, a leftist progressive organization in Ecuador.

“Before he actually went to the IMF, before he declared that there was going to be a loan with the IMF, legislative already passed a law that was meant to promote “economic growth” and “to create jobs” etc. but what that law does is basically give tax cuts to wealthy people who have any sort of enterprise. It makes sure anyone who invests in Ecuador, they get a 10 to 20-years tax break.”

After the deal with the IMF, the austerity measures were passed last Tuesday erupting protests all over the country. The cancellation of oil subsidy was immediately responded by a nationwide transportation strike since last Thursday. However, the protests not only opposed the cancellation of fuel subsidies but were also against the 20 percent reduction of salaries of public workers and taking away the 15 days vacation workers are entitled to every year. 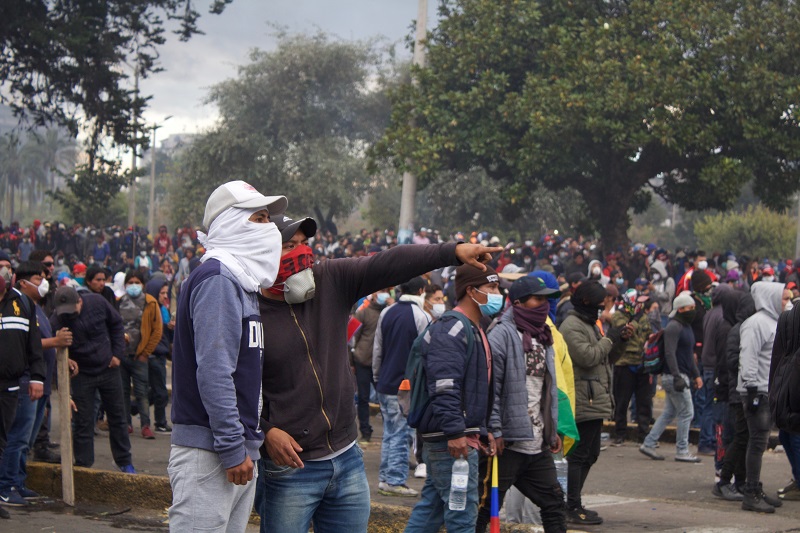 “In Ecuador, you do not have a bureaucrat,” said Carmel meaning unlike many countries, Ecuadorean government jobs are not permanent bureaucratic position. “So you normally have to renew your contract every year. In December you renew your contract. So in coming January, you are gonna have hundreds of thousands of people who are gonna make 20 percent less and that is problematic,” said Valerie. The salary cut and inflated diesel price affect the whole economy as “you are damaging the purchasing power of people” Carmel says explaining that this will mean less expenditure by people which will have a trickle-down effect on the economy.

As poverty is racialized in Ecuador against the Indigenous and Afro-Ecuadoreans, they will be the worst affected by the price hike. The Indigenous people, whose main source of income is from agriculture, will be the one bearing most of the burden of the subsidy cuts. They depend on diesel-based trucks for delivery of their goods or to receive necessary input materials for farming and the price hike will affect their livelihood directly. Hence, for the people to leave their fields and to march to the capital city signifies a fight for survival according to Carmel.

Around 20,000 Indigenous people marched from various provinces of Ecuador to reach Quito on last Monday. Instead of meeting with the protesters, Moreno fled the capital city and established government in the coastal city of Guayaquil.

To stop the protesters, the government declared a state of Exception. However that failed to deter the spontaneity of the demonstrators. In fact, on Wednesday, the Indigenous people joined the anti-IMF protest with their Quiteño comrades making it one of the largest protests Ecuador has seen in last 10 years. From La Casa de la Cultura (The House of Culture) to downtown Quito, protests erupted often leading to violent confrontations with the military resulting in serious injuries to many.

A few brave protesters were in the frontline pelting stones, launching rocket fire and often throwing tear gas canisters back at the police. Behind them, a large mobilization awaited, chanting, encouraging. When someone would get injured, a group of volunteers with white flags would run towards them. There would be a moment of calm followed by sounds of firing and blasts as soon as the injured is taken away.

Since the protests started, at least six people died including an Indigenous leader, Inocencio Tucumbi of Ecuador’s Cotopaxi region. According to information by various activist circles, and local media, 95 people are gravely injured, 83 people are missing among which 47 are minors. More than 800 protesters have been arrested by the police. Around 57 journalists have been attacked and 13 jailed. 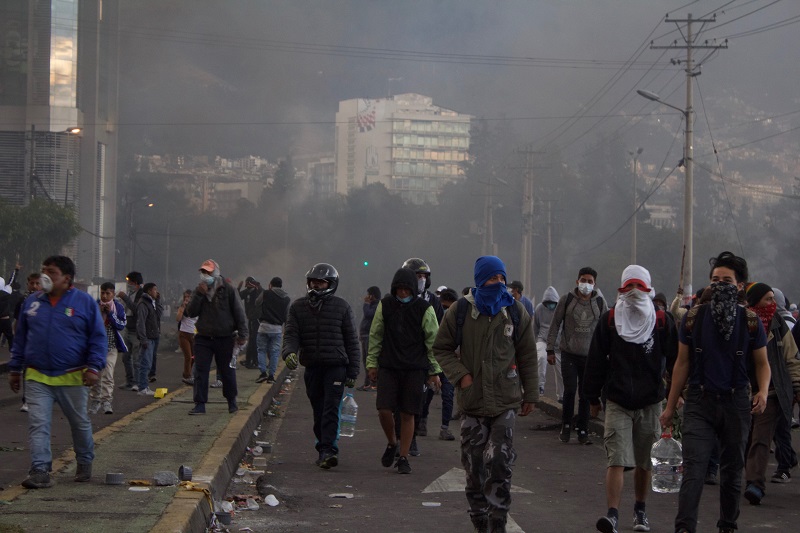 In Ecuador, Indigenous peoples’ uprisings led to overthrow of three presidents in the past- Luis Osvaldo Hurtado Larrea in the 1980s, Rodrigo Borja Cevallos in the 1990s, and Lucio Gutiérrez in 2005.

However, this time, deposing Moreno should not be the priority for protesters according to Carmel. If Moreno’s government is toppled and an early election is called, then it might benefit some other party but the people would not see any relief. “What will the people get from early elections? That is just an extra expense. There are no presidential candidates that are against the model of the IMF. None of them. We have people like (Jaime) Nebot as a presidential candidate, who will be a nightmare. He is not only a right-wing candidate but he was also involved with cases of torture and forced disappearances in the 80s. So it would be the classic IMF recipe with repression which is what always happens, but I fear that with someone like him in power, it would be tenfold. The other candidate would be (Guillermo) Lasso who is a banker who profited personally from the fiscal crisis of 1999. He is, of course, going to govern for his own people. So we have no options,” she said. 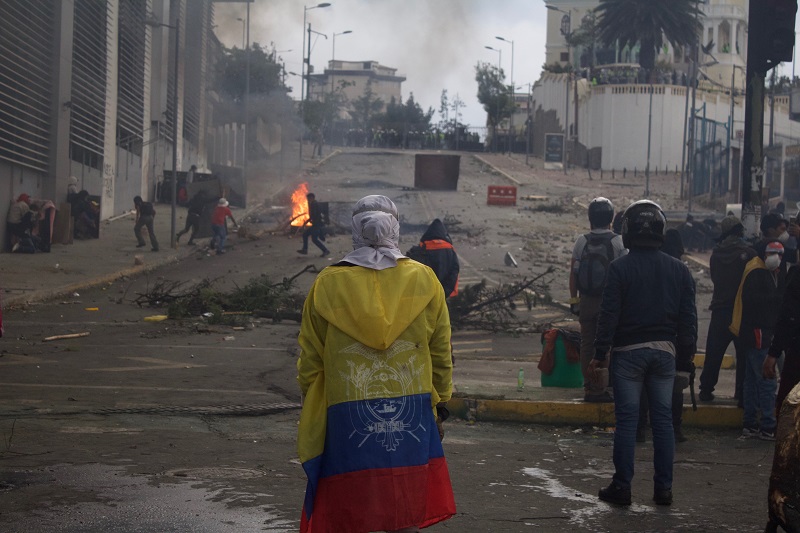 An economist associated with Desborde. who did not wish to be named, calculated how many people will be affected by the austerity measures. According to his calculation, 655,000 people are US$10 a month away from being poor, 131,000 people are US$2 a month away from being poor. It means if they stop receiving two dollars in income, or spend two dollars more due to inflation, they will be impoverished. If inflation grows three percent, there will be 158,000 new poors. But the government is estimating a ten percent inflation. “This is the reason people are out. There are a lot of people who cannot afford it. Everything in Ecuador is moved on diesel-based trucks, even transportations. So if you are hiking that, you are hiking everything. That’s why people are angry and they know they will not be able to afford to live,” Carmel concluded. 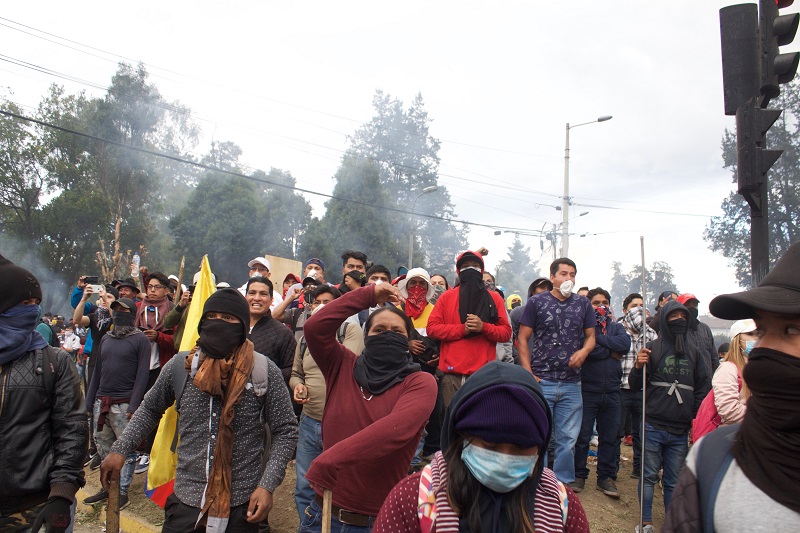 The only way to de-escalate the crisis is to revoke the fuel price hike which Moreno has refused to do. The fight, which activists think will continue until the government backs down, is a fight for survival and till now no negotiations have been reached between Moreno and the president of Confederation of National Indigenous of Ecuador (CONAIE), Jaime Vargas. Until their concerns are addressed, the people are determined to hold onto their ground braving the police repression while also dispensing a form of Indigenous justice by arresting police for “bad behaviour” and keeping them hostages in La Casa de la Cultura, a safe space for the Indigenous protesters. 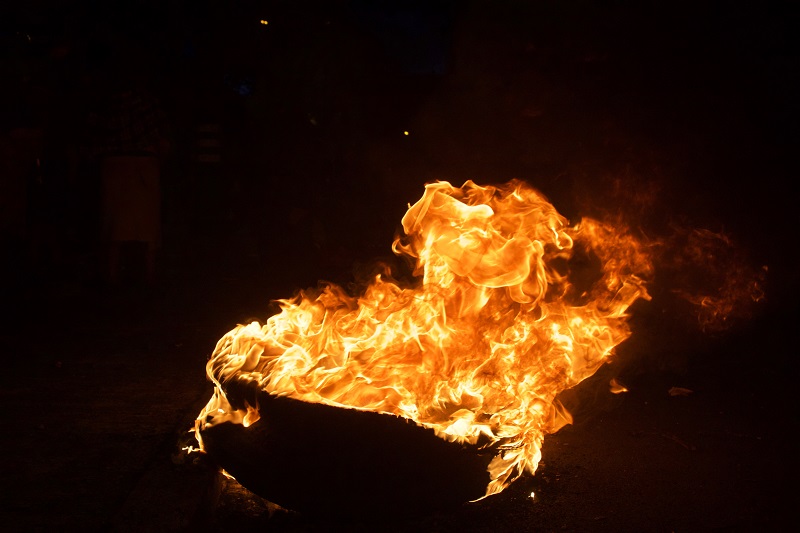 Utsa Sarmin is an Indian journalist based in Ecuador and working for teleSUR English. All images are by the author.