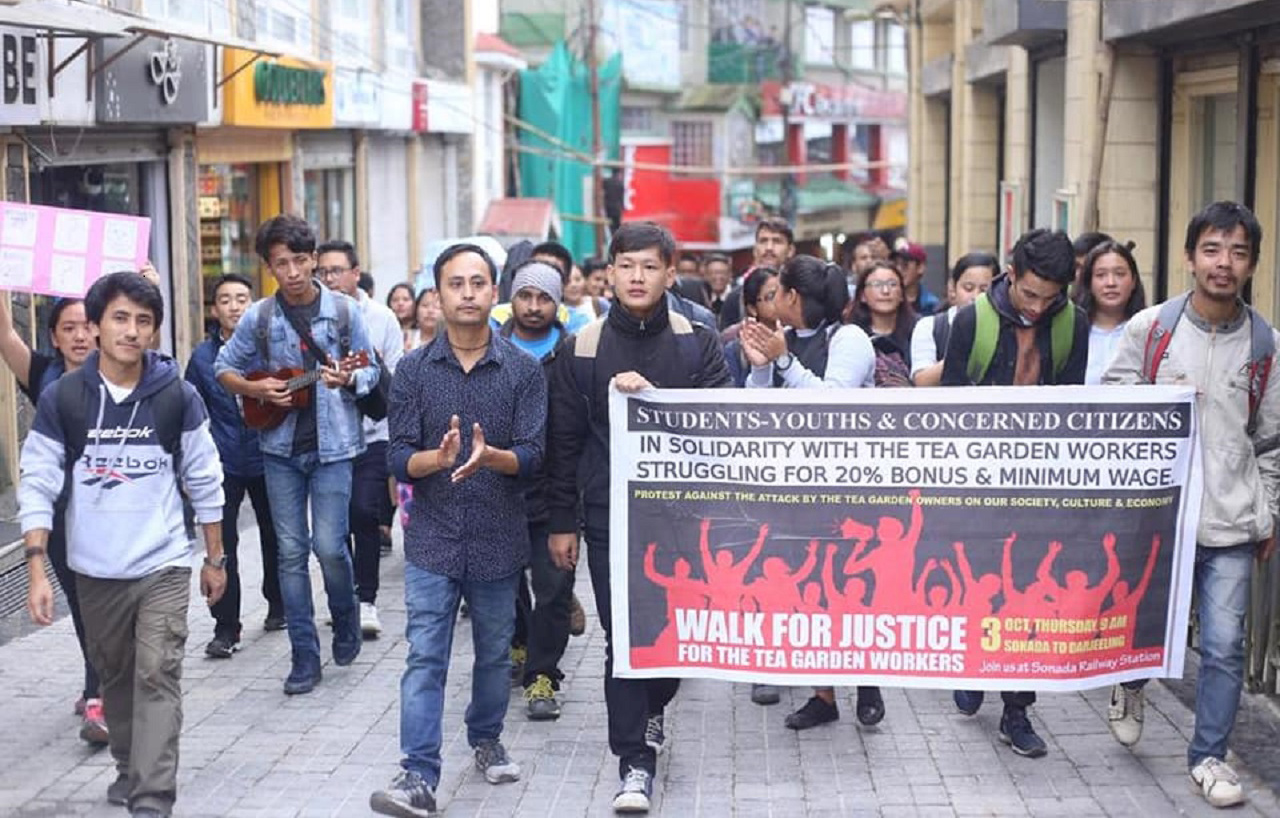 Darjeeling Hills Tea Workers Yet To Get Bonus, Struggle Continues.

Nearly 70,000 to 80,000 tea workers in Darjeeling Hills from West Bengal are staring at a bleak future. With just one more day to go before Dashain, the workers of the tea gardens in the hills are yet to get their festival bonus this year. A report by SumendraTamang, from Darjeeling.

Darjeeling tea is one of the finest teas in the world. Popularly represented as a “processed beauty”, and made into an object of desire, what is kept hidden from consumers is the production process – the relations of production through which the workers produce tea. It would not be an exaggeration to say that with every sip of Darjeeling tea, we are indirectly supporting an extremely inhumane system of appropriation of labour by the tea garden owners who do not even pay the basic minimum wages to the workers toiling in the plantations. While most of the workers in the industry are paid Rs. 176 a day, a cup of good Darjeeling tea in an up-market coffee shop, on average, costs way more than that. In addition to this, it is the dishonouring of the provisions of the Plantation Labour Act (which regulated labour wages in tea gardens) by the tea estate owners that have worsened the living conditions of the tea labourers. Under the act, the garden owners are mandated to provide free housing, subsidized rations, access to free medical facilities and education to the workers. These social benefits which are part of the wage as mandated by Plantation Labour Act are in reality non-existent in most of the gardens. Very few tea gardens still provide housing facilities, roads, hospitals (primary health center), schools, crèches – that were once available to the workers.

This year, thousands of tea workers in Darjeeling from West Bengal are staring at a bleak future on the eve of the festival season. With just one more days left for Dashain (Dusshera), one of the major festivals of the tea garden workers, the garden owners have refused to accept the demand of a 20% bonus made by the workers.

NEGOTIATIONS WITH THE BONUS RATE:

Bonus is an important part of workers’ rights. Every year, before Dashain, an annual bonus is given to the workers in tea industry.  Last year, on the pretext of the Gorkhaland movement of 2017 which caused disruptions in tea production, only a 15% bonus was given. Generally, the bonus in the Darjeeling tea gardens is higher than in the Terai-Dooars gardens. This year, the tea gardens of Terai and Dooars have been given a 18.5% bonus. But, using the excuse of a decline in production, the maliks of the tea gardens initially announced a 8.33% bonus. The Bonus Act 1965 stipulates a minimum 8.33% bonus to the workers, irrespective of profit or loss.

Workers strongly resisted the minimal bonus rate of 8.33% under the leadership of the Joint Forum, an umbrella platform of consisting of several labour unions from the hills. More than 6 meetings have taken place till now between the workers unions  and the tea-garden owners. Last Monday, the tripartite meeting held in Kolkata between the representatives of the  Darjeeling Tea Association (DTA), the Joint Forum of tea workers’ unions and the state labour department; failed in breaking the deadlock over the bonus issue. The union representatives staged a walkout, threatening to intensify the ongoing struggle. As of the writing of this report, the owners are adamant on paying at most a 15% bonus, which is on par with the previous year’s bonus, while the unions with fierce protest against the proposed rate of 8.33% from the workers have been demanding 20%. The stalemate continues. 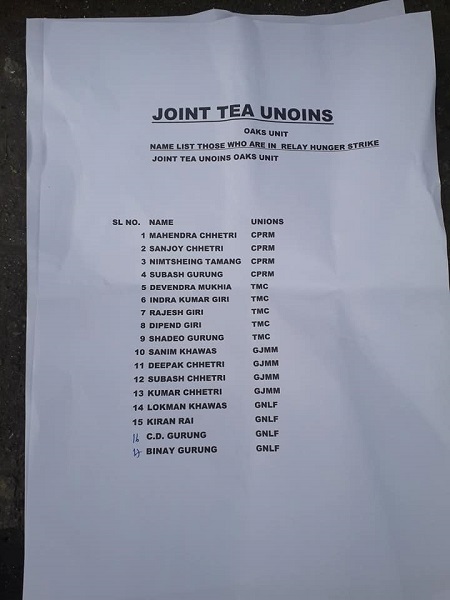 The bigger question however is, if the workers are not given the bonus by 7th October, how will they celebrate their main festival this year? The tea-garden owners’ adamant attitude seems to suggest they are not bothered. The next bonus meeting has been called on October 17, by which time the festival will be over.

The counter narrative of the tea garden crisis:

It is not uncommon to come across a popular narrative that the tea industry is in a state of crisis. However, this so-called crisis is a myth created by the owners of this large-scale, lucrative industry, to avoid providing the facilities they would otherwise have to provide to the workers in accordance with the Plantation Labour Act of 1951 and the Payment of Bonus Act of 1965. This year too, the Darjeeling Tea Association, which is a conglomeration of tea garden owners of the region, parroted the same narrative of “under loss”, “decline in production”, and initially offered only the minimal bonus rate of 8.33% to the workers. But the latest statistics as published by the Tea Board of India reveals a different picture.

When the tea industry in India is booming every year, with production and export reaching new heights owing to robust domestic and international demand, and new records in price are made during auctions for Darjeeling tea, the tea owners of Darjeeling–Terai-Dooars and also Assam have been pleading to their respective governments citing an inability to pay a dignified wage and bonus to the workers. This is just a lame excuse to add to the list of exploitative and discriminatory practices the workers in the tea industry face. According to many auction house statistics, a sharp increase of 43% has been recorded in the price of Darjeeling tea this year. But still the owners refuse to pay a minimum wage and try desperately to cut the bonus rates of workers.

The workers are angry. After the last meeting failed to yield any results, the unions intensified their protests. Gate meetings, blocking of tea dispatches, and hunger strikes are being observed in different tea gardens across the hills. In some tea gardens, the owners came to distribute a bonus of 12% but the workers refused to accept it. The workers are not willing to accept anything less than 20%. The central leaders of different trade unions sat on a 12-hour hunger strike at Darjeeling motor stand on 3rd October. At various tea gardens in Darjeeling, workers sat for hunger strikes as well. 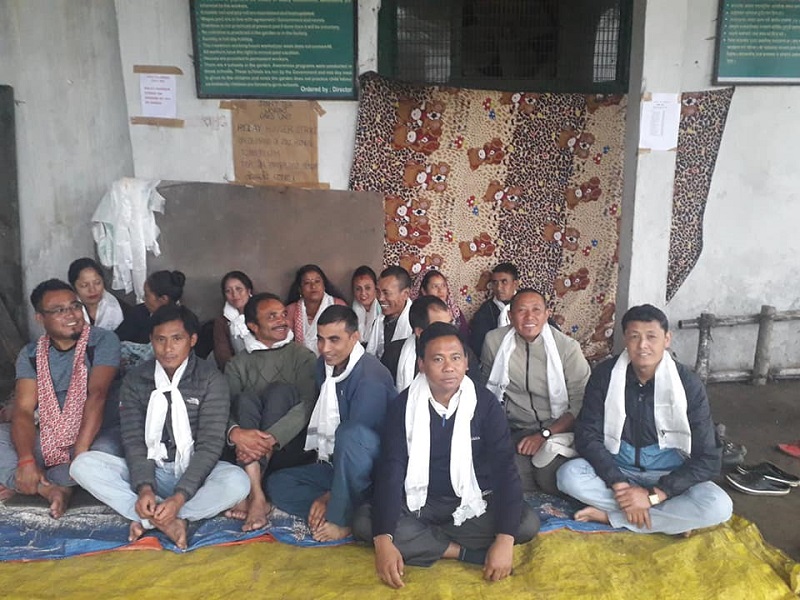 A cultural protest in the form of a paidalyatra (protest walk) was held on 3rd October. It was organised on the call of students, youths, and concerned citizens of Darjeeling. The paidalyatra started from Sonada, with echoes of slogans, songs, and poems. More than 60 people walked for a stretch of 21 miles till Chowrasta, Darjeeling.  Different youths, students, social workers, and activists spoke out against this attack on workers and expressed their solidarity with the tea workers. They pointed out that the exploitation that prevails in the tea gardens is not only a workers issue but a larger social question. The tea gardens have a deep impact on the social, political, and economic relations of the hills and so a social movement is the need of the hour. The workers struggle for a minimum wage and fair bonus along with many basic rights has to turn into a mass people’s movement. The paidalyatra  was organised with this political message. It was a reminder that the workers are not alone in their struggle for fair wage and just bonus demands. 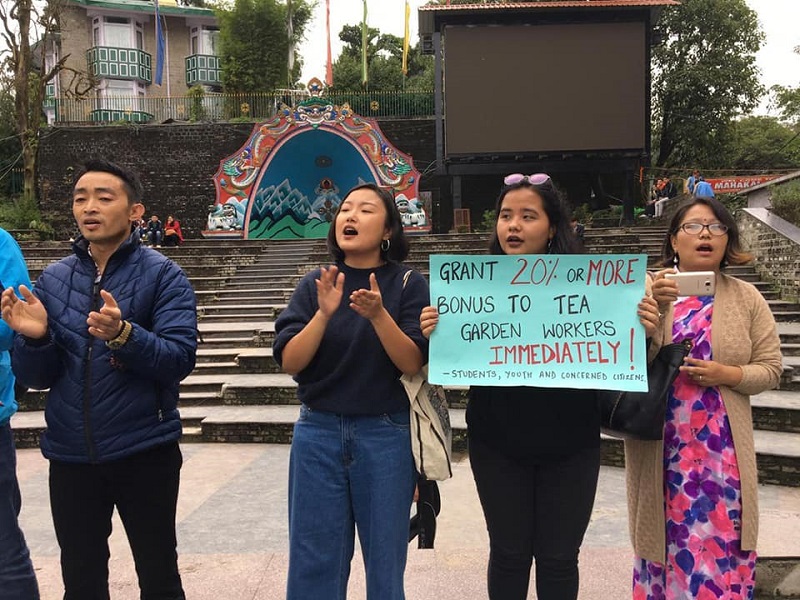 Youths, students, social workers, and activists in solidarity with the tea workers.

On 4th October, workers of all the 87 tea gardens in the hills observed a 12-hour strike. The whole of Darjeeling including Kalimpong stood still for 12 hours. Shops and markets remained closed in solidarity. The tea trade unions took out processions in different parts of the hills in support of their demand for higher bonus payout.

SumendraTamangis a political and cultural activist based in Darjeeling.