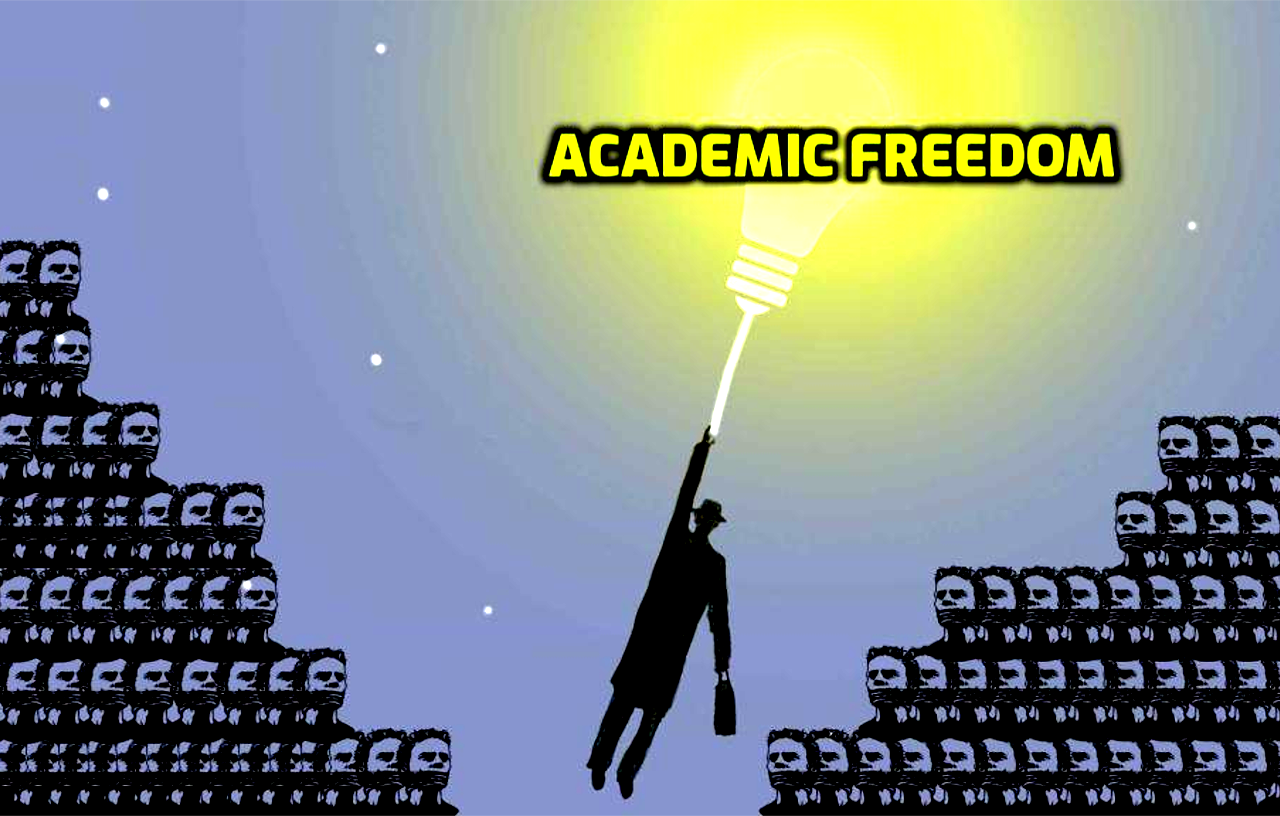 “At best, it’s a noble attempt to move the situation forward by making the smallest demand one can. At worst, it reflects a delusional belief about the relative nobility of academia as a pursuit that is rooted both in a certain mythology prevalent among academics everywhere as well as casteism in Indian culture.” Ronak Soni writes about the recent open letter by a group of Indian academicians asking the Indian Government “to lift the blackout at [Kashmir’s academic] institutions”.

Scholar Ali wakes up to the soft calls of a distant redstart and lazily stretches, unwilling to get out of bed for yet another Monday. He checks the watch-dial he excavated out of his suitcase in August, when he turned his phone off. Already 10 or 10:30, he better get up and get to work. He runs his hand along the floor till he finds the crutch and awkwardly pushes himself onto his feet.

His way to the lab goes by the perimeter of the University, and as always he dreads this part of the walk. There are always those few degenerates, turned away from the official queue and not yet noticed by the guards, outside the fence, plaintively and furtively gesturing at him to come closer. Scholar, weight of the world on his harried brow, knows he must not go; don’t they understand the importance of his work? He prefers the walk back; he always works till well into the evening, well past curfew.

A few buildings from his lab, the stillness is shattered by a whisper.

Scholar has never seen this man before.

“Walaikum assalam. Who are you?”

“I need your help, baye. They think I threw stones, and I need to tell my brother in —”

“How did you get past the guards? I can’t help you. Please go away and wait your turn, or I will have to call them.”

Scholar sharply turns away from this intruder, and starts walking as fast as he can. He’s fuming. Don’t these people know why academic institutions were granted freedom? How can this survive if he focuses on politics and not on academics? It would contravene the government’s directives! He doesn’t like turning away from his suffering brethren any more than the next person, and oh he does feel so sorry for them; as anyone can see his brow is the heaviest among all! But he has no choice.

In his lab, he checks his notebook for today’s work. He needs to run the STM, what was once Academica Raina’s job. Her fault for getting involved in politics. Thus put upon by the incompetents that surround him, Scholar Ali grits his teeth and sets to work.

… This is the Srinagar imagined in a rather flummoxing open letter to the Indian government penned by some Indian academics, in which they argue that the universities of Kashmir must be granted “campus integrity” as a means to “academic freedom.” The intentions of the signatories seem to be mostly good: they seek to highlight that their industry has been disrupted by the imprisoning of the entire state, and indeed they hedge their statement with references to the full extent of this problem.

And indeed, if they had restricted themselves to highlighting the disruption and suffering caused specifically to academics, it would have been part of an important part of the public conversation. This government, in a certain hallowed tradition, has a habit of making decisions for the benefit of the People that seem to be beneficial to only a few actual people. It is vital that as many people from as many walks of life as possible highlight the harm done to their colleagues and communities and thus hopefully build up in the public imagination an easily available coterie of contradictions.

However, instead of choosing to explore in further detail the specifics of the suffering caused to academics, the signatories of this letter choose to spend a large chunk of their precious column space calling for freedom of communication specifically within campuses. They pay lip service to the existence of other people who need the internet and phones just as much by proposing that some portion of the communication infrastructure of these campuses be set aside for public use.

It is a problem that the most public statement by any academics, the only one in a national newspaper, focuses on this suggestion. Not only is this suggestion remarkably impractical on both institutional and personal levels — as I tried to highlight in the story of Scholar Ali — it is just plain insensitive. An entire state has been imprisoned for a month and a half, arbitrary violence on common people is so common that numerous chilling reports have been almost magically flowing out of the information lockdown since the beginning, expatriates are losing their source of financial support and facing material discrimination, people are dying from lack of access to medical care… and academia publishes an open letter asking that the restrictions on universities be lifted.

This focus is hard to explain. At best, it’s a noble attempt to move the situation forward by making the smallest demand one can. At worst, it reflects a delusional belief about the relative nobility of academia as a pursuit that is rooted both in a certain mythology prevalent among academics everywhere as well as casteism in Indian culture. Academics everywhere pull the wool over others’ eyes, not to mention their own, by appealing to a romantic vision of the overarching importance of the pure pursuit of truth that is easily brought down to earth by dispassionately observing a lab for a few months. But in India, where intellectual pursuits have historically been reserved for the Brahmin varna that to this day dominates the profession, this mythology finds particularly fertile ground to take root in in both conscious and unconscious ways. In the spirit of charity, let’s assume it’s the first.

In that case, this piece reflects a deep confusion about the effectiveness and purpose of open letters to the government published in a newspaper. No government, especially not the current regime, is going to read an open letter and drastically change its tactics; to imagine otherwise is sadly mistaken. One can only hope to reach the average reader of The Hindu and touch her heart; this is important, for in empathy lies unity. And, I can’t imagine this coming off as anything but insensitive to the one who thinks the actions of the government are unjust, and just plain dumb to the one who doesn’t. This seems especially egregious given the respect and political power that academics can wield among the general population, despite being a prime example of why we don’t deserve it; taking this position into account, this plea for special treatment is effectively an application of the principle that to escape from the bear chasing your group you only need to be faster than your slowest friend.

I don’t believe that anyone of the second type is going to read this short piece, so let me conclude with a message to those who already support the Kashmiris’ cause. Some academics are really with you and others aren’t, much like with any other profession. I won’t try and claim that the point of view of the article that appeared in The Hindu is a minority view, but there are many who actually grieve at all the injustices, known as well as unknown, that have been visited, and are willing to stand up if called upon. That is all that need be said.

Ronak Soni is a theoretical physicist working at Stanford University. The opinions in this piece are his own and do not reflect those of his host institution.