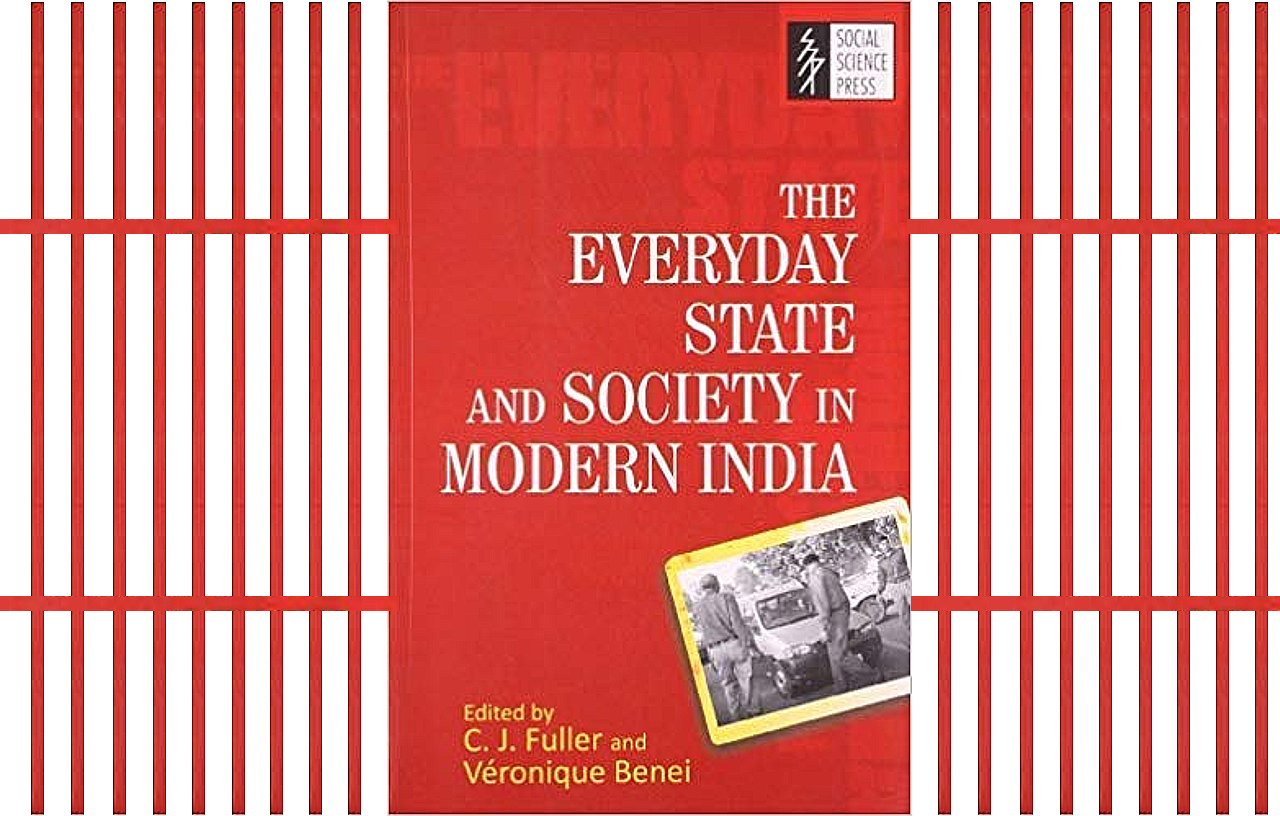 Everyday State and Society in Modern India: A Review

State evokes awe in the eyes of most social scientists as it is the place where power is legitimised through the usage of rationality. State is something which is ‘above all’, something transcendental, all powerful and appears distant from our usual mundane lives. C.J. Fuller and V. Bénéï take us to a journey where these commonly accepted truisms of social sciences are questioned. ‘Everyday State and Society in Modern India’ (2001) is a much needed work which puts into the foreground empirically those suppositions which appear ‘common-sensical’. Zeeshan Husain and Anindita Chakrabarty’s review of the book.

The top institutions of the state look far away; but the middle and lower level bureaucratic channels are deeply embedded into society. In this book Fuller and Bénéï argue that state and society are deeply interconnected. The book asks its readers to theorise the state by observing local interactions of the state with society. All the seven essays are based on empirical research, mostly ethnographic, and lay out the hypothesis that ‘state’ must be understood as a part and parcel of ‘society’ and neither different from, nor opposed to, society. Fuller and Bénéï take issue with the much accepted approach towards the Indian state, mainly led by post-colonial and post-structural scholars. An overview of the seven chapters is shared in the following paragraphs.

The first chapter is a fair overview of the existing studies on the state, both conceptually and empirically. It introduces the reader to the subsequent seven chapters, and outlines the argument that Indian state must be conceptualised through the overlap between state and society. The second chapter, one of the best pieces in the book, written by seasoned political scientist Thomas Blom Hansen, deals with the issue of the Mumbai riots and the bomb blasts of 1992-93. Hansen tells us how communal local media turned up during the riots, how the Shiv Sena and Bharatiya Janata Party (BJP) kept on stoking anti-Muslim sentiments into the heart of Hindus, and how the government used Terrorist and Disruptive Activities (Prevention) Act (TADA) targetedly against Muslims while no such strict laws were enacted for the Hindus. Hansen reports how the ‘state’ ignored the findings of the Srikrishna Commission report, and how deeply prejudiced were the actions of police officers during the riots. Hansen ends beautifully by describing how Muslims are mobilising genuine police officers to protect their life and limbs over corrupt politicians. However, one wonders what kind of role other civil society organisations of Mumbai play when it comes to the Mumbai Muslims.

In the third chapter Emma Tarlo takes us to Delhi and uncovers the Emergency period 1975-7 that witnessed the autocracy of the Congress government. The author skillfully argues for treating an office (the ‘slum wing’ of the Municipal Corporation of Delhi) as a fieldwork site, as many things can be found within an office itself just like in a physical anthropological field. She tells us about the sterilisation initiatives taken up under the façade of family planning measures, and the promised housing plans. As lower level bureaucrats manipulated people into consenting to sterilisation, poor people also tried to escape this by employing ingenious means. Tarlo took help from the archive’s staff to rediscover the categories used in those documents which she found ambiguous, and illustrative of how ‘state’ was observed and interpreted in clear terms by the people experiencing it.

We visit Uttar Pradesh via Craig Jeffrey and Jens Lerche’s essay. Jeffrey’s fieldwork in western UP and Lerche’s in eastern UP, help us to weave a comparative picture of this big state. Jeffrey and Lerche tell us that we cannot assume that rural UP society is homogeneous where there is no difference among various stakeholders in the state. They show, on the contrary, that Jats of western UP successfully manipulate lower level bureaucracy in order to maintain their dominance; an act which is not so conspicuous among the Thakurs of eastern UP. Not only land, but also control over state apparatus helps a caste maintain its dominance in a region – is what both of these scholars tell us.

We visit a beautiful village in West Bengal as AE Ruud takes us in his essay to a village, as seen through the perceptions of its inhabitants. The author explains how political activities in the village make the actors juggle between the ‘moral’ and the ‘immoral’. The author observes a panchayat meeting and notes how the meeting is representative of a certain party instead of the village. Despite knowing what the decisions would be, people attended the meeting for re-establishing a patron-client relationship. State, thus, gets dissolved in the ruling political party and presents itself as a patron in, what most would say, a ‘democratic’ set up.

Filippo Osella and Caroline Osella take us to relish Onam, a festival marking the beginning of the Malayali New Year. It is the return of the demon King Mahabali whose age glorified eternal bliss for everyone present in his kingdom (read Kerala). Osella and Osella look at the state and society through the prism of patron-client relationship. Citizens push the state for positive intervention in the festival, and the state in doing so, gains legitimacy from the citizens. On other words, the state is not a passive object but one that is actively re-created by the agents or citizens through the role of clientship in its everyday functioning.

The state-society overlap in South India is further captured by David Mosse’s essay which elaborates the irrigation system (mostly tanks) in Tamil Nadu. This essay is the only one in the volume which deals with colonial and post-colonial history. Mosse interrogates colonial history to understand the present irrigation system. Centralized colonial rule never fully displaced the local or village level ownership of tanks and associated irrigation system. Local kings and rulers had traditional rights and power to maintain those water tanks but these got slowly eroded with colonisation of south India. A lot of confusion occurred between the colonial state and the local rulers for the maintenance of the irrigation system leading to its slow decline. The present situation in Tamil Nadu is broadly the same where irrigation is still divided between the community and the state.

The last essay by Véronique Bénéï talks about how primary schoolchildren are fed Hindu nationalism as a part of their curricula. Based on a fieldwork done in a school in Maharashtra, it covers considerable expanse of centre and state-level curricula. Curricula are set by the government and implemented by teachers. Bénéï tells us that young kids are trained to imagine “nation” via biased history teaching. She argues that children (and later adults) accept ‘nation’ through the more palpable category of ‘region’ (here Maharashtra). Similarly, Hindi language is considered as one’s own language despite both the teachers and students speaking only Marathi. Though she has mentioned the anti-Muslim tone of the curricula, she could have detailed further on the gender and caste aspects of the Hindu system of education by the ‘secular’ state.

All of the seven essays describe to us how society and state overlap to a considerable degree and any theorisation without taking this concurrence into consideration would lack rigour. The book is pertinent in the present context as we experience the overarching presence of the state that percolates into and controls our everyday lives and dialogue with the society, and vice versa. In consideration of the communal nature of the contemporary governance, the article by Hansen and Bénéï become particularly relevant.

When we see today’s youth and middle-aged people everywhere in the country (except possibly in South India) subscribing en masse to the ideology of Hindutva, it is largely because of a biased education system. If today India’s Muslims are alienated, it is because of the complete anti-Muslim nature of the political class and police. The chapter by Tarlo is significant as she explores the hidden in the apparent, and asserts the autocratic nature of certain regimes of governance. The article hints about the lack of the idea of a welfare state not now but even forty years ago, and therefore establishes that the determining role of a regime lay not only on the governance, but also on its omnipotence.

The notions of morality, immorality, patronship, and clientship have been explicitly brought out through the chapters, and help us understand the functioning of the contemporary state through such relational categories. Uncovering the patron-client relationship becomes important to understand how the state while benefiting some, disenfranchises certain groups. It is at this juncture that the experiences of marginal groups need to be grappled with, for a holistic understanding of those who are subsumed within this, and those who are kept at a distance. The patron-client relationship is not perpetuated without the assurance of patronization from those who are benefited. Upon close observation of the patterns of this ‘dynamic process’, one finds how people located at the upper class-castes are perpetually benefited by the neo-liberal state. These are also the ones who comprise the chief contributors to such a state – participating both as producers and consumers.

The dialectical relation between the state and society is however more comprehensively understood when the lenses of marginal groups, such as Muslims, Dalits, ethnic minorities, and women are taken into consideration. This volume fails to give space to such perspectives. While both the editors very aptly say that people at the peripheries are largely negotiating with the state, not resisting it (p.25), one awaits a newer project from them to uncover how these vulnerable groups are in fact negotiating with the state.