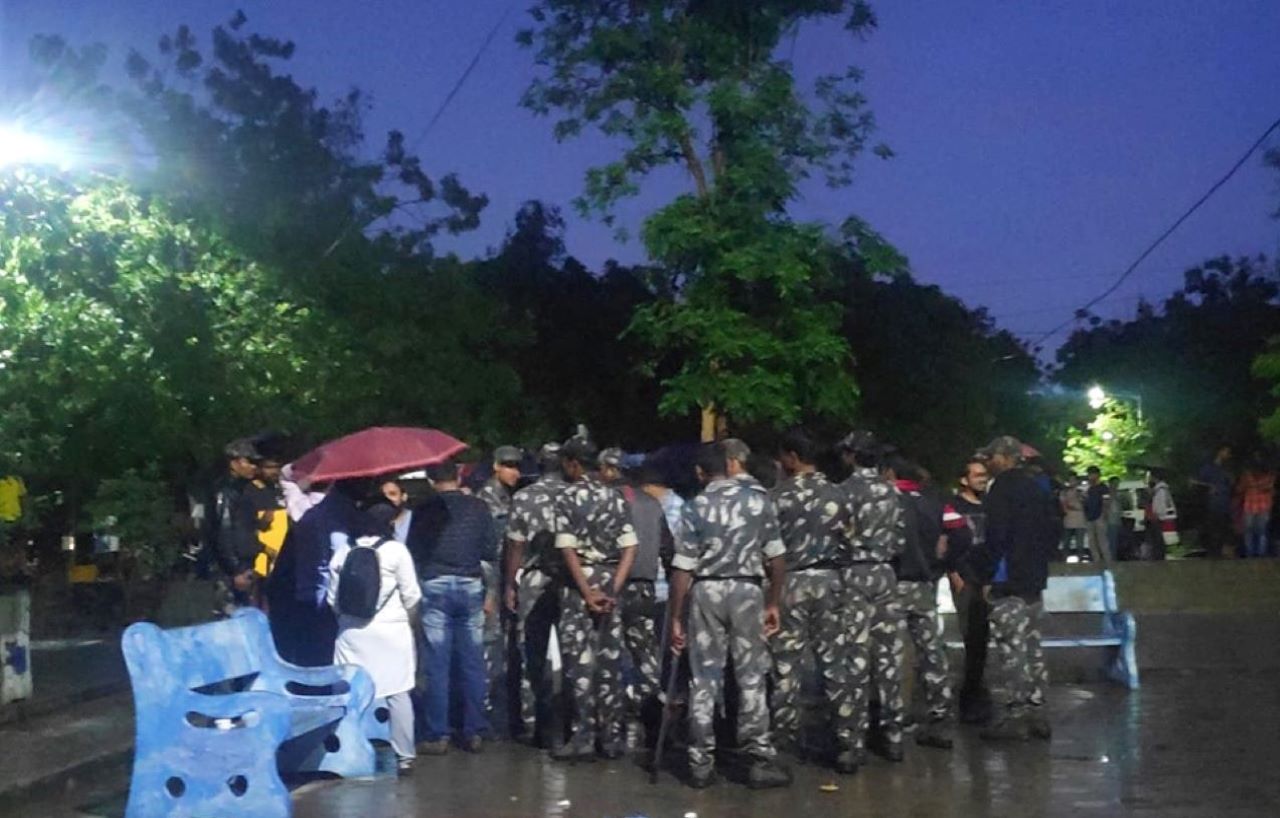 Screening of Documentary Faces Police Threat: A New Normal in University of Hyderabad

Recently, student activists in HCU faced police harassment and threat for organising a screening of national award winning documentary Ram Ke Naam. Students alleged that almost all such events and programs organised by them, now had to face administrative and police hassles. This has become a new normal in the Central University campus. A GroundXero report.

On Tuesday evening, six students of the University of Hyderabad were detained by the Cyberabad Police for screening the award-winning Anand Patwardhan documentary Ram Ke Naam on campus. The screening was organized by the All India Students Association (AISA) in the seminar hall of School of Social Sciences with the permission of the Dean. The permission was rescinded an hour prior to the screening, and the administration clarified that the program was being cancelled as no student organizations were allowed to hold events on campus. 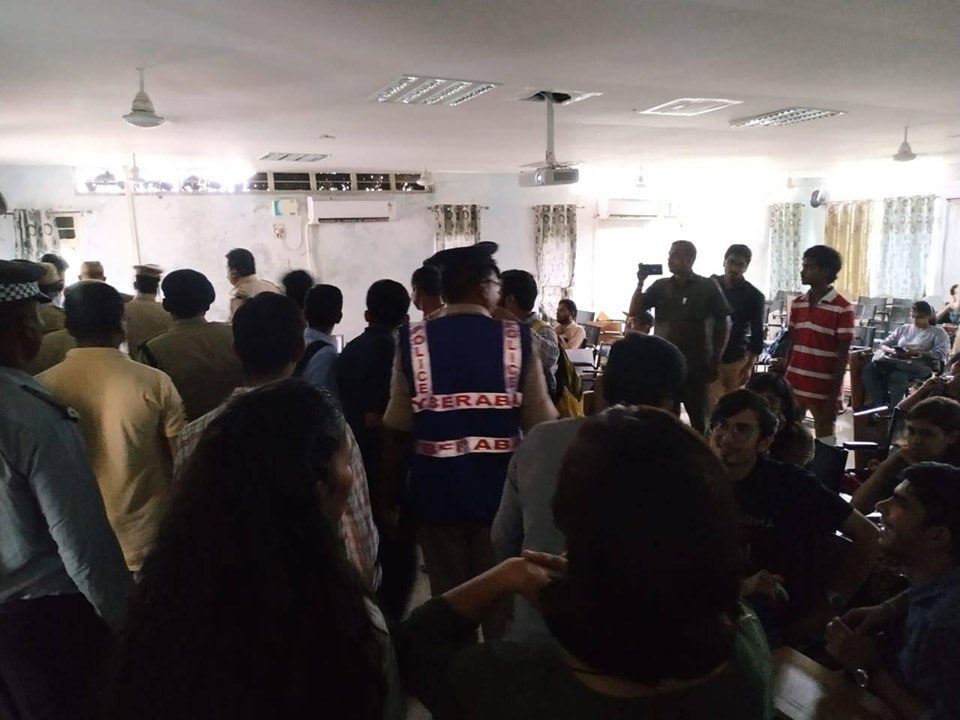 Police inside the classroom to stop the screening

As the students resisted, the police dragged and pushed four of them into their van. Later, another student was picked up by the University security and was handed over to the Gachibowli police station. The students, accompanied by professors, went to negotiate with the police; there too one of these students was detained. The students were threatened with professional ruination by the police, and rebuked for “wasting taxpayer money” and “speaking against the government.” 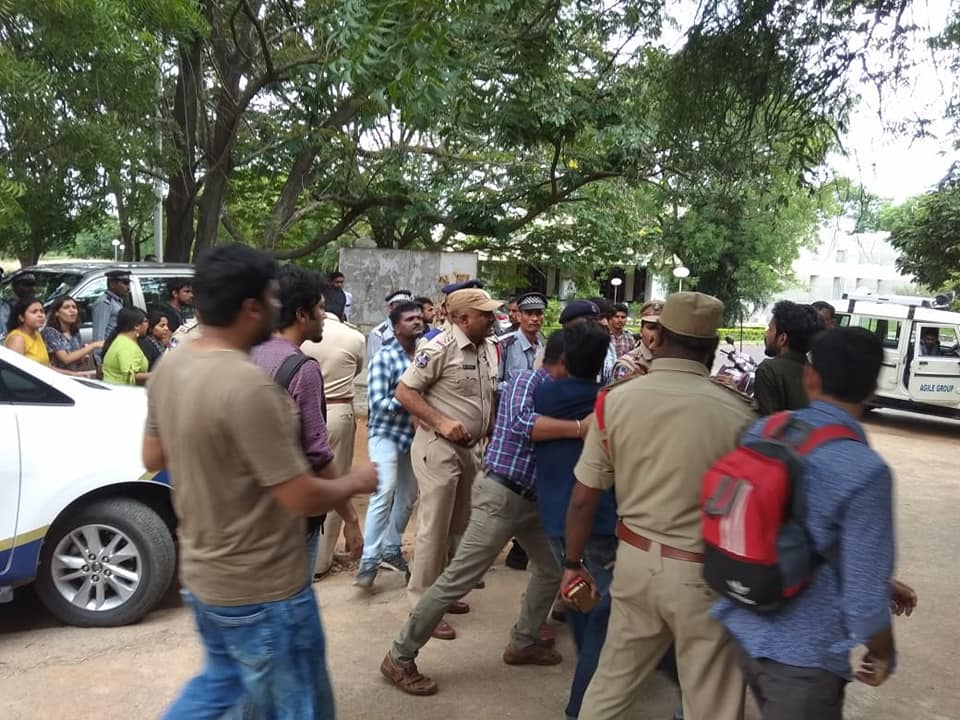 Student being dragged by police in civil dress

This is not the first such incident to happen recently. Students allege that almost all events since the most recent semester started have been dealt with in the same way.

Following the curfew in Kashmir and the subsequent abrogation of Article 370, a joint protest was organised by Students Federation of India, Ambedkar Students’ Association, Muslim Students’ Federation, Dalit Students’ Union, Telangana Vidyarthi Vedika, All India Students Association, Students Islamic Organisation of India and Jammu & Kashmir Students Association. There, a call was given to burn an effigy of Amit Shah. The same day, a group of students from Kashmir were threatened by the police with arrest. As people gathered for the protest, the university security seized the posters being made and attempted to disperse the crowd. Soon after, university security officials cited a circular by the Registrar implementing Section 144 on the order from the Cyberabad Police. Students allege that there was a discrepancy in the dates mentioned in the circular, and even pointed it out, but the Telangana Police dispersed the crowd by deploying the Rapid Action Force (RAF) team. It later became clear that claims that Section 144 was in effect were false, and purposely used to inspire fear and intimidate the student community.

Two days later, on 7th August another protest gathering was called by Left organisations (Students Federation of India,All India Students Association, and the Telangana Vidyarthi Vedika) on the abrogation of Article 370 at the velivada, the site of the Rohith Vemula Movement. All the shops were closed down before the protest was scheduled to begin, with RAF battalions and police constables ready to act. The protesters began defying the orders of the police. Representatives from the three organisations addressed the gathering while the police tried stopping them repeatedly. The gathering was also addressed by a Kashmiri student. Meanwhile, the police and university security videographed the whole event. 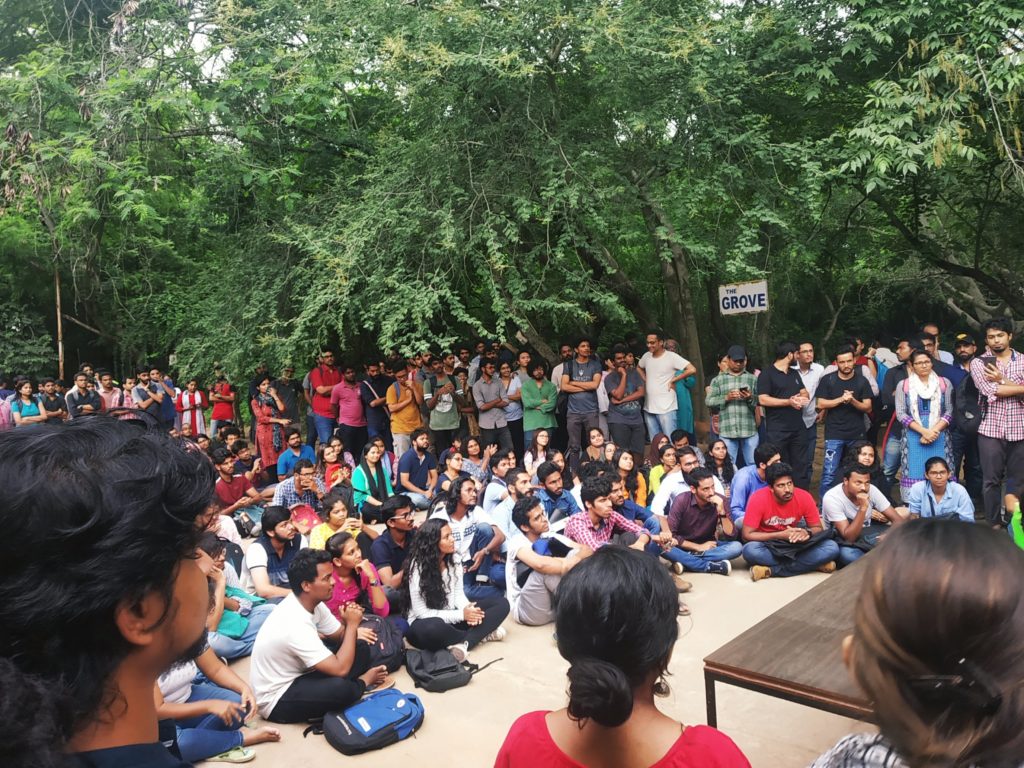 Kashmir: Article 370 and Beyond being held outside the School of Humanities building

A panel discussion titled Kashmir: Article 370 and Beyond, organised by the student forums Abhiyaan and the Social Science Forum, was also interrupted by the police. The speakers were faculty members at the university: Kham Khan Suan Hausing, G. Vijay, Masrook Dar, Shefali Jha. This event was scheduled to be held in the auditorium, and just as the case with the film screening, the permissions for holding this event were rescinded half an hour before it was scheduled to start. In protest, the forums decided to hold the discussion outside the School of Humanities when the dean, S. Sarat Jyothsna Rani, asked those gathered to leave the premises, saying that “no academic discussion [were to be held] on the campus, go out of the university and hold these discussions.” The discussion began and within a few minutes the Cyberabad police tried to stop the discussion, and the only Kashmiri speaker on the panel was threatened with a criminal case by the police.

Once again, on 16th August, a talk by Professor Haragopal was cancelled by the university authority, after initially being granted permission. The shops were again closed down in the afternoon to stop students from gathering in the shopping complex, where Rohith Vemula and four other research scholars set up the velivada to protest against the punishment of social boycott by the administration three years ago. As the talk began, it was disrupted by the university security, who held that it was illegal to hold talks in a public place. The registrar himself arrived to cancel the meeting. Students argued that permissions for events and auditoriums were being cancelled consistently, the registrar agreed to allow Professor Haragopal to speak at the B. R. Ambedkar auditorium the next day. As agreed upon, the talk took place the next day while the security officials arrived towards the end removed all the banners and demanded that a record of the program be submitted to the authorities.

Gachibowli Police Station, speaking to a journalist from The Woke Journal, even suggested that there were no arrests or detention. They received a complaint form the university administration, and confiscated a laptop to check its contents, and the students merely accompanied them as they checked the laptop.

Having initially declined to comment, a full day later, the University responded to the incident in a press release, stating that “this was screened several times in the past on our campus, both as public screenings as well as in classrooms for academic discussions”, that “it gives the university no joy to see students being detained”, that “calling the police for resolving issues within the university is not normal university policy”, that “There is no need for student organisations to mislead or use subterfuge to hold events to gain transitory political gains in a competitive environment,” and went on to suggest that the “students take pride in the university’s position as one of the top institutions” of the country. However, activists from AISA while denying the charges by the university (that the behaviour of the organisers was abusive and out of control) allege that the police had arrived at the venue before the university security officials and that they were politely speaking to the university security.

Anand Patwardhan, director of the documentary responded to the university’s statement:

Please remind me on which occasion after 2014 did the HCU administration officially invite me to screen my films on campus? I did come to HCU campus and screened Jai Bhim Comrade soon after Rohith Vemula was mistreated into committing suicide. This open air screening was organized, not officially, but by the Joint Action Committee of students who had united to fight for justice for Rohith Vemula. If the present HCU administration wants to make public amends for the recent unfortunate incident when police was called on campus to stop a legal screening and went so far as to arrest the organizers, then I am offering a solution.

Let the HCU administration organize an official screening of Ram Ke Naam in your auditorium, or largest suitable venue, and invite me to come and discuss the film with your staff and students. Let all contending voices be heard in a dignified debate. Let democracy grow through healthy discussions.