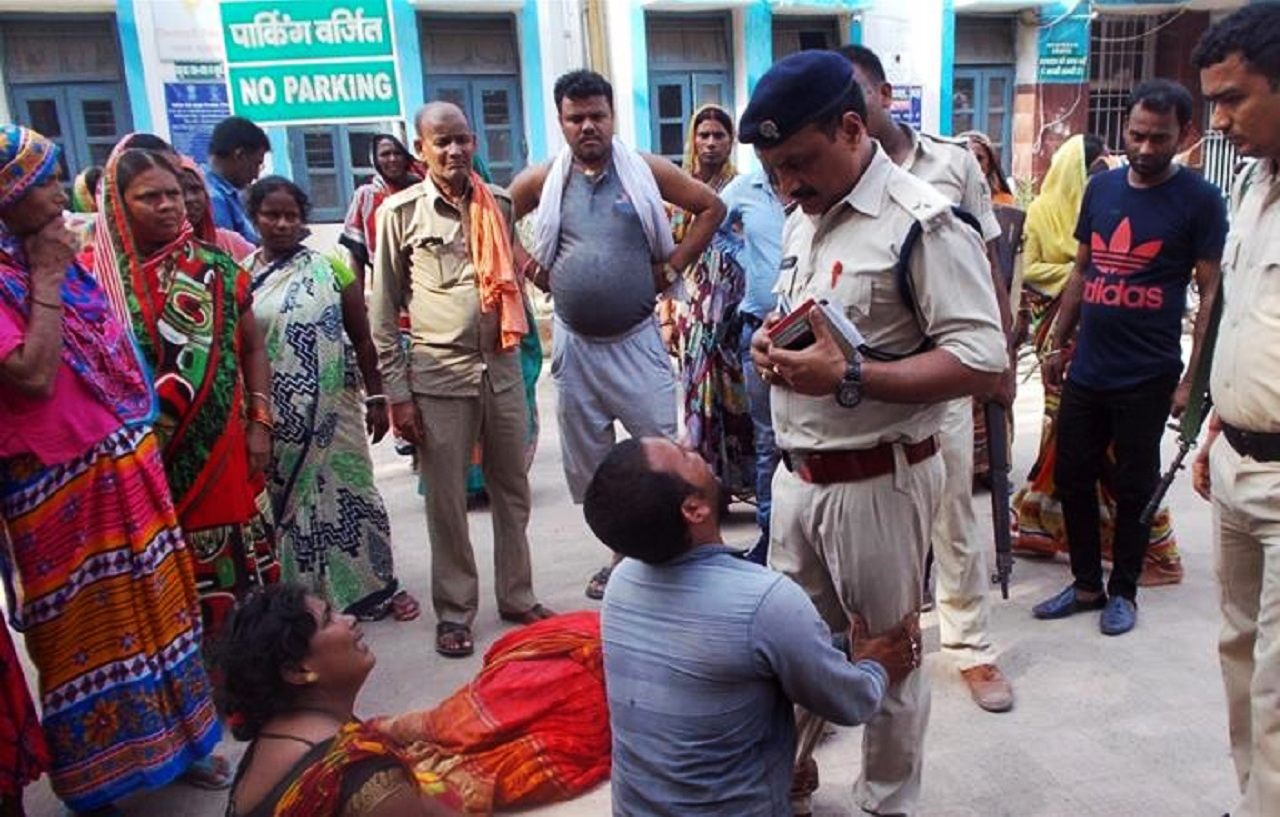 Bihar has been witnessing increasing instances of mob lynching in the recent years. On July 19th, three cattle traders were beaten to death by an irate mob in Nandlal Tola of Pithauli village, within the jurisdiction of Baniyapur Police station in Saran district, 75 k.m north of Patna. Although it is a clear case of mob lynching, in which two dalits were killed along with a Muslim, yet the state government and the local police administration have been trying to cover up this horrendous act by painting it as a matter of mere cattle smuggling. A GroundXero report by Anish Ankur.

According to the official version, on 19th July around 2 a.m., three cattle thieves stole two goats of one Budhan Ram of Nandlal Tola, a hamlet consisting of approximately 150 houses belonging mostly to the “chamars”.  As the story goes, after successfully completing their mission of stealing two goats, the thieves came back. They were obviously planning for a “bigger catch” this time, like a buffalo and her calf, which were tied alongside the main road. The thieves, came around 4 to 4.30 a.m. They had brought with them a pick-up van. They tried to drag the buffalo onto the pick-up van, but since the buffalo was reluctant, there was a little scuffle between the thieves and the buffalo. In this process, the buffalo started mooing, which woke up Budhan Ram’s family. Budhan Ram raised an alarm and soon more than 150-200 people gathered from the nearby villages. They were armed with sticks, bricks, bamboo-sticks and other sharp weapons. They surrounded the pick-up van and took hold of the three thieves, tied their hands and started beating them up. By the time the police reached the spot, two of the three were already dead, and the third one died on the way to the hospital. An FIR has also been filed by Budhan Ram, that reiterates the above facts. The police, the Chief Minister Nitish Kumar and the villagers have so far stuck to the above-mentioned narrative.

When ‘GroundXero’ visited the victim’s villages — Paigambaour and Kanhauli Manohar– and enquired about the incident, what was clear from our interactions with various persons, was that it was clearly a preplanned conspiracy by the right-wing political forces. Fingers were particularly raised at Bajrang Dal, which has, in the recent years, expanded its tentacles exponentially in Saran district.

By talking to the victim’s family members and local people, what transpired is an entirely different story. On 18th July, in the afternoon, Raju Nat, a forty year old small cattle trader, visited the house of Motilal Ram, a middle aged man, of Nandlal Tola, one of the fourteenth tolas of the considerably large village Pitharauli and made a deal to buy  two buffalos from him for thirty-five thousand rupees. Raju also paid an advance of fifteen thousand rupees to seal off the deal. That very night, Motilal Ram made a call to Raju asking him to take the buffaloes since he had already made the advance. He also insisted, that Raju come early in the morning to take the buffaloes, and asked him to come as soon as possible. 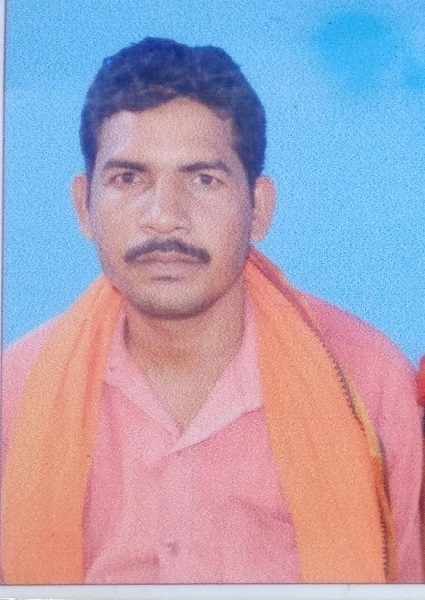 Raju Nat, along with his nephew, Videsh Nat (20), went to the house of Naushad Alam Quraishi  in the adjacent village of Paigambarpur to hire his pick-up van to haul the buffaloes. Naushad Alam Quraishi (50), then came along with Raju Nat and Videsh Nat to pick up the buffaloes. The three started at 4 am, had a round of tea at a local tea shop near their house, and after travelling 6-7 km, they arrived at Nandlal Tola around 5 am. They parked the pick-up van on the roadside, because Motilal Ram’s house is roughly a hundred meter away from there. Also there is not enough space in the narrow lane for a four wheeler to pass through. Here, around two hundred armed men were waiting for them to reach the spot. This mob of angry armed men surrounded Raju, Videsh and Naushad, tied their hands and started beating them up. Naushad made frantic calls to his close relatives that he is in danger. As he spoke over the phone, his relatives heard abuses being hurled in the background, as well as loud extortions to hurt and kill — “maro! (Beat him), mar dalo (kill him)!” 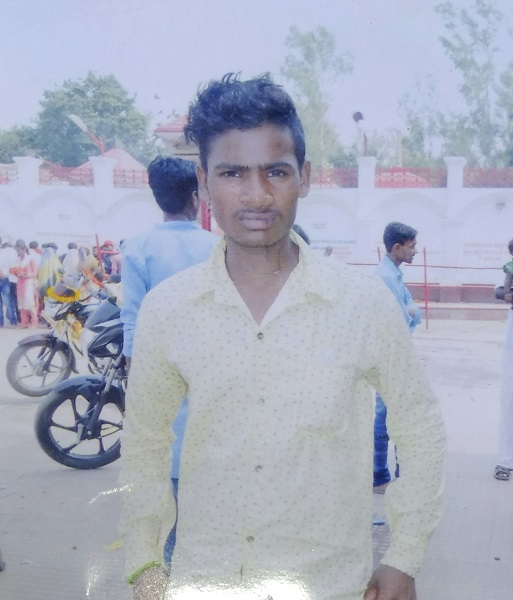 Naushad’s relatives could not muster enough courage immediately to go to the spot. They went to the Baniyapur Police Station and saw the policemen preparing to head towards the spot. Soon they got information that Naushad, Raju and Videsh Nat have been lynched by a mob. 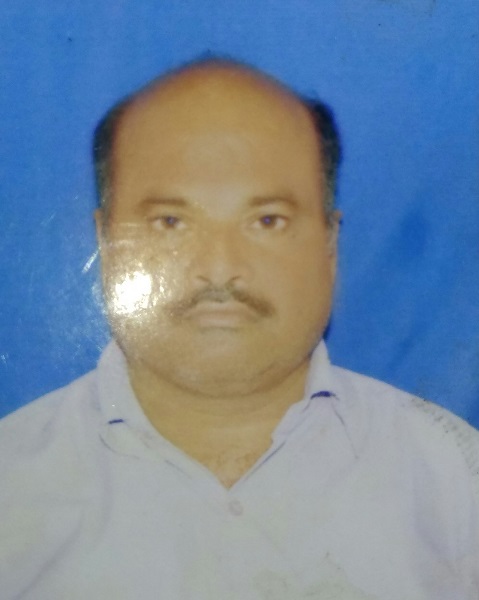 These are the two narratives then that represent the same incident. So far, two FIRS have been lodged by the parties involved. On the behalf of the three deceased, Naushad’s elder brother Md Azad lodged an F.I.R (Case number 231/19). Timing of this FIR is 8.45 a.m. In this FIR, Raju Ram, Satyanarayan Ram, Bhola Ram, Patel Sah and Nandkishore Panheri and others have been named as the accused. In the other FIR, lodged by Budhan Ram, three “unknown” thieves have been named as the accused. Budhan’s Ram case no. is 230/19. Strangely, the time, when was this FIR was lodged is not mentioned. 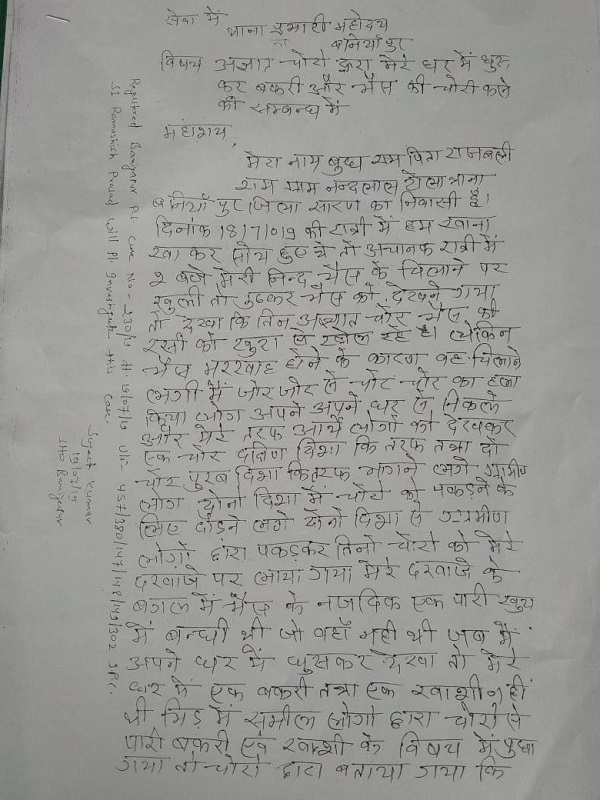 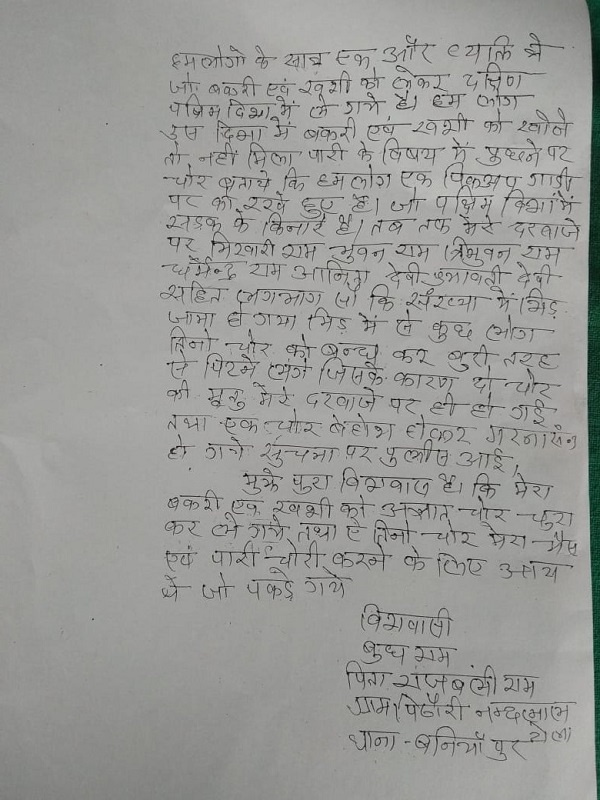 FIR, lodged by Budhan Ram, in which three “unknown” thieves have been named as the accused.

So what really happened? At least four to five fact finding teams, led by Lotantrik Jan Pahal, PUCL, Indian Association of Lawyers, CPI and CPI(M) teams from Patna and other places, have visited the spot where the crime took place. Nageshwar Prasad, who led the People’s Union for Civil Liberties (PUCL) team, termed this incident as “A clear cut case of mob lynching. Police and administration are using the language of the perpetrators. We enquired about them (the deceased) and none of them had any criminal records in the past. It was a premeditated plan where people had been mobilized for this murderous act. Raju Nat and Videsh Nat are involved in cattle trading, while Naushad was simply driving his own van. Raju Nat and Videsh Nat were from a very poor family, whereas Naushad belonged to a comparatively well off family. They went to NandlalTola simply to bring the cattles from Motilal Ram.” Nageshwar Prasad further added, “We met Motilal Ram at his house and he accepted that he had invited Raju Nat in the morning of 19th July, but when he woke up on hearing noises, all three had been beaten to death.” 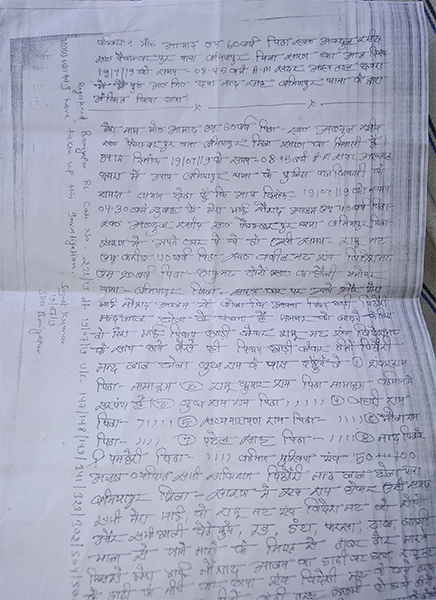 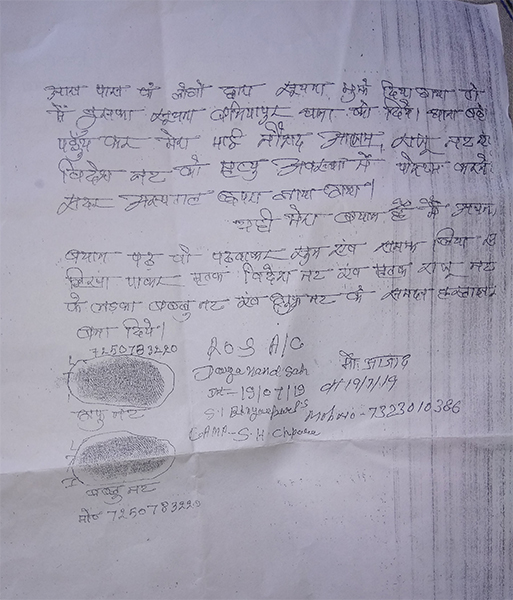 Another member of this team, Ashok Kumar, a lawyer by profession, said “When we went to Baniyapur police station, they were not aware about Motilal Ram and Raju Nat’s deal about purchase of buffaloes. Even they were surprised by this plain fact that the deceased went to NandlalTola to bring the buffalo that he had bought. But the police is not investigating on this line. They have not even interrogated MotilalRam till now. He can be a crucial link in this entire episode.”

Following, public outcry, the  police have been forced to arrest some people from Nandlala Tola. After these arrests, a lot of people have fleed from their houses. Most of the Nandlal Tola residents are still insisting that all three were certainly cattle thieves.

‘GroundXero’ met Gappu Nat (50), at his village Kanhauli Mahohar. He is the father of Videsh Nat, while Raju Nat was his younger brother. Outraged and agitated, Gappu Nat was in a state of utter shock. He repeatedly said “My son and brother were mercilessly killed, without any fault of theirs. They were innocent. We are living in this village for seven generations and have been involved in the cattle business, but no one has ever raised a finger at us.” In contrast to other parts of Bihar and the rest of the country, Nats here are not part of any nomadic community, but are permanently settled for several generations.

But who organized such a heinous crime? According to Nasibul Haque of Nagra village, near Chhapra, “It is unbelievable that ‘Chamars’ could have done this lynching by themselves without the support of other powerful castes at the local level. It couldn’t have been executed by them alone. There must be some other forces involved.”

Family members of Naushad have indicated the involvement of local Bajrang Dal activists. Naushad’s elder brother Mahtab Alam Kuraishi said “Some people from this very village are also involved. Can you imagine that even our panchayat representative has not come to pay even a formal condolence?” People are naming Vijay Pahalwan alias Vijay Kushwaha, a Bajrang Dal activist as the one involved in the orchestration of this lynching. Shailesh Nat, the older brother of Videsh Nat informed, “Vijay Pahalwan used to abuse my brother and uncle whenever he saw them carrying cattles and had even threatened them with dire consequences. He also used to boast about his powerful connections with the local police station.” 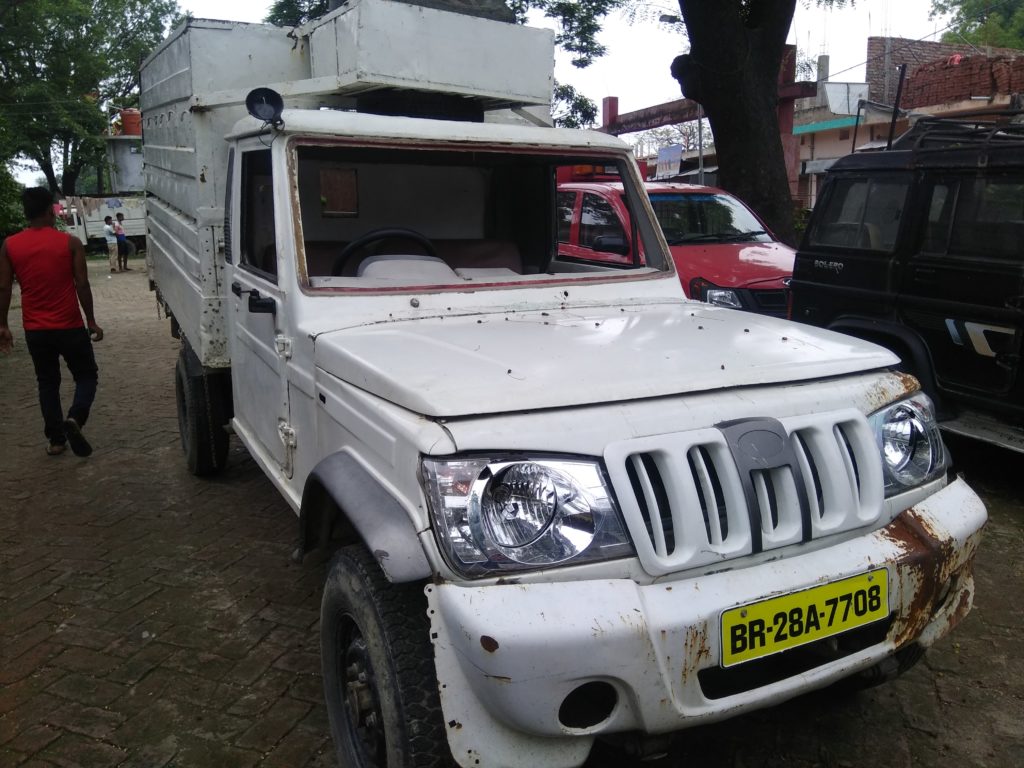 Shahid Kamal, a social activist, who was part of the PUCL fact finding team observed “Present NDA government in Bihar is reluctant to take any action against Bajrang Dal. In the past also, Bajrang Dal’s role in fomenting communal tension had been largely ignored, particulary in this Chhapra district. Since police itself is biased in favour of these communal organizations, it is unlikely that they will ever investigate the alleged criminal role of  the Bajrang Dal in this mob lynching.”

Some people do not see this incident as an isolated one, but rather as one that needs to be seen in the continuum of similar incidents happening across North India. According to Seraj Ahmad, former ward member of Paigambarpur, “This tragic incident is part of an all India trend, where minorities are being deliberately targeted and killed. Tabrez Ansari of Jharkhand met the same fate. This country also belongs to us. Our forefathers have sacrificed a lot to build this country, but now we are being facing this discrimination. Even our lives are not secure. We don’t need any compensation. We only want those responsible to be brought to justice.”

Justice is still a far cry for the victim’s family as the Saran administration is heavily pressurised in not identifying this incident as one of mob lynching. It is strange that without any serious investigation from local police, the districts administration and even the chief minister himself, are parroting the perpetrator’s narrative as the truth.

Satyanarayan Madan of ‘Lotantrik Jan Pahal’ said, “Saran SP is saying that instead of ‘mob lynching,’ it is a case of ‘mob violence’. In our opinion, the mob was involved and organized in a planned manner, so it’s certainly a case of mob lynching.” Moreover, Satyanaryan Madan added “In our state there is an old feudal culture, that if any petty thief is caught, a mob will generally thrash him and may even kill him. Currently, this feudal culture of ‘mob justice’ is being used by the right wing organizations to meet political ends. Mob lynching is the new strategy to settle political scores.”

Cover Image : Relatives of the mob lynching victims speak to a police officer as they mourn outside a hospital in Chapra in Bihar [Reuters]. All other images courtesy to the author of this report.