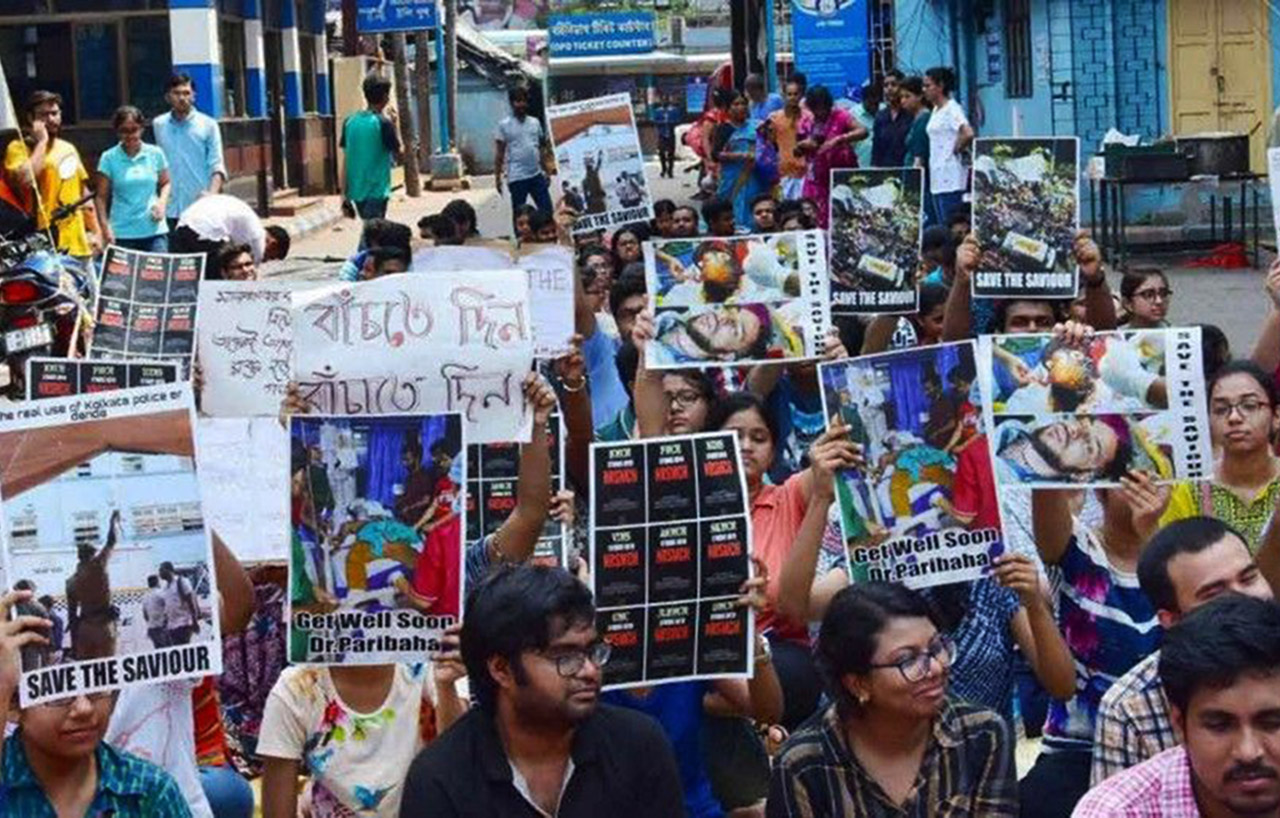 The Doctors Movement in Bengal: Mamata’s Paranoia vs. the Saffron Hate Campaign

Will Mamata Banerjee seriously tackle the problems plaguing health services instead of pursuing quick cosmetic solutions? Will the junior doctors depend solely on police for security, or will they also care to connect to the patients’ hearts?  Writes Biswajit Roy.

The intolerant, paranoid, and mercurial Mamata Banerjeee, if she does not change her mindset to resolve crisis situations, appears to be the best bet for the Narendra Modi-Amit Shah duo for finishing their agenda of  conquering Bengal in the 2021 assembly election in the wake of the BJP’s massive success in recent parliamentary polls, both in the state and across the country.

The latest example of Mamata Banerjee’s vulnerability to the BJP’s provocations is manifested in her initial dealing with a statewide cease-work of junior doctors. Fortunately, the week long standoff ended amicably on last Sunday following a climbdown on both sides. However, lessons are yet to internalised by those who matter, in particular the chief minister.

The junior doctors had resorted to a wildcat strike following an attack on some of their colleagues in the government-run NRS Medical College and Hospital in Kolkata. The attackers belonged to family and neighbours of an elderly and poor patient who complained about his death was due to medical negligence. Two doctors sustained injuries, one of them grievously. In retaliation, the doctors stopped attending to even emergency services, while demanding adequate police protection and exemplary punishment of the culprits. Five of the accused had been arrested and kept in police custody, charged with non-bailable sections. The doctors, however, dismissed this as inadequate and demanded the chief minister’s presence at NRS hospital to discuss lasting solutions. Meanwhile, thousands of hapless patients including new-borns and the old suffered.

The factors behind such attacks

Such attacks on doctors are not limited to the Trinamool Congress regime. Repeated occurrence of patient party-doctors clashes over several decades in West Bengal and many other states are symptomatic of the multiple ills of health services. The main reasons are an accumulated public anger and frustration over bureaucratic hurdles, rampant corruption, hierarchized apathy, and over-stressed infrastructure in government hospitals at one hand. On the other, crass commercialization of medical services has made the fleecing of patients in burgeoning private sector hospitals extremely common. There is an almost total absence of accountability and transparency of the institutional higher-ups to commoners at both public and private sector hospitals, the ‘patient party’ who come face to face everyday is adding to the conflict situation The lack of communication  often borders on upper class/caste arrogance of the doctors to the underprivileged patients and their families. Their poor cousins from the middle classes also receive the raw deal unless they have ‘political çatch’.

Junior doctors are over-worked, over-stressed, and poorly paid despite being the mainstay of government hospitals outdoor and indoor services including emergency wards. They are not only the most powerless in the professional hierarchy but also the most vulnerable to irate mobs who attack them mainly to avenge deaths due to alleged negligence,  perceived or real. Neighborhood toughs who enjoy political patronage take the opportunity to become the most powerful avengers on behalf of the bereaved in order to ensure the latter’s loyalty and fear in mohallas and slums. Sitting governments and ruling parties look the other way, as they feel safe at the release of explosive emotions of the voters at the cost of young doctors.

There are certain regime-specific factors as well. Common voters are happy that the Mamata government has made medical treatment free in government hospitals including tests and medicines. Her administration has opened subsidized medicine shops, night shelters, and cheap canteens there as well. Consequently, the footfall of patients and their families have surged phenomenally. This has also made the rural rush to Kolkata hospitals unmanageable.  Mamata’s other populist move to open ‘super-specialty’ hospitals in districts was apparently meant for arresting this trend. It failed, however, to stop the rush to the state capital as a result of inadequate infrastructure and manpower in the districts. An acute shortage of doctors at public hospitals due to an outflow to private sector as well as other states has created a huge gap between the demand and supply of freshly trained doctors, aggravating the crisis.

Freshly minted medical students resent the mandatory years of service as interns at government hospitals after post-graduation or specialization courses, failing which they are required to cough up a huge amount. Middle-aged doctors generally abhor rural postings with unattractive career avenues, transfer blues, limited private practice opportunities, absence of urban amenities and above all, insecurity. While government stipulations are aimed at checking the outflow of doctors who have been trained at public expense, this effort to run the show by denying doctors career opportunities in a market economy has created a mutual hostage situation.

Also, there are vested interests among doctors and para-medical staff who have been running profit-making clandestine networks with private nursing homes, chemists, pathology labs, and medical appliance suppliers. These racketeers are not happy with Mamata for making almost all aspects of healthcare in governmen free for all. At the same time, power centers in the state hospitals have been shifted to Mamata’s minions who have made them their own fiefdoms. This has only added to the chaos.

Mamata’s efforts to control the private sector’s fleecing of patients through a government-run clinical establishment commission to investigate consumer complaints also ruffled the corporate feathers. Violence over overbilling, virtual ransoming of dead bodies, and negligence deaths in private hospitals has vitiated the atmosphere further. Above all, post-poll political uncertainties have prompted free-for-all hooliganism and fence-sitting by the police. The NRS attack happened against this backdrop.

The opposition parties are known for fishing in troubled waters. But the BJP went ahead further and blamed Muslims for the mayhem simply because of the religious identity of the deceased’s family and neighbors this time. Mamata was targeted for protecting the minority community hooligans. The communal/racial/caste-based stereotyping of organized underworld and petty criminals, irrespective of the facts, has been in vogue since colonial times. Now it has become a majoritarian post-truth across the globe, from Trump’s America  to Modi’s India. Though the agitating doctors quickly rejected this saffron mischief and declined them a foothold, the sectarian subtext was in the air thanks to the increasing communal polarization in the state.

Mamata added fuel to the fire

Unfortunately, Mamata herself snowballed the agitations by her initial intemperate outburst against the protesting doctors during her visit to SSKM Hospital on the second day of the cease-work. Angry about the doctors’ refusal to speak to her over the phone on the previous day, she accused them of joining in a political conspiracy against her by harboring ‘outsiders’ in their ranks. Moreover, she betrayed her poll-induced paranoia and insecurity by mocking the agitating doctors of following the BJP’s suggestion and practicing communal profiling of patients. Furious over their sloganeering demanding ‘justice’ in front of her, she threatened them with dire consequences if they did not resume work within four hours. This added fuel to the fire and extended the shutdown for a week, at the cost of thousands of unattended emergency patients, some of whom allegedly died in the absence of life-saving treatments. Young doctors closed the main gates of the hospitals, even barring patients from entering the emergency wards at many places. Though some of them attended to patients and ran makeshift OPDs outside, clearly the sense of social responsibility and efforts to reach out to a larger audience that marked similar cease-works by their seniors in the 1980s was missing.

As her threats triggered a mass resignation of senior doctors and inspired demonstrations of solidarity from their fellow professionals in other states, the deadlock provided another opportunity to newly appointed Home Minister Amit Shah, anointed India’s new ‘Sardar,’ to send a fresh missive on the deteriorating law and order situation in West Bengal. Union Health Minister Harsh Vardhan too cried foul echoing his boss rather than caring for the staggering toll of dead children under an encephalitis outbreak in JDU-BJP ruled Bihar. The Indian Medical Association, although they never bothered to protest against arrest of Dr. Kafeel Khan, who had tried to save sick children in Gorakhpur in Yogi Adityanath’s Uttar Pradesh; or against the institutional murder of Dr. Payal Tadvi, who was at the receiving end of castiest slurs from superiors in Maharashtra; or against the life sentence given to Dr. Binayak Sen, who had worked among tribals in Chhatisgarh, threatened a national strike in solidarity with their colleagues in Bengal.

The patients’ plight and pressures from various quarters including non-BJP opposition and civil society celebrities who not only marched in support of the doctors but also issued appeals to the chief minister mellowed Mamata Banerjee by the weekend. She promised proper security in hospitals and appealed for normalcy while offering an audience with the junior doctors. Swallowing her earlier intimidations, she assured that no punitive action would be taken against the young doctors but reminded them of the imposition of the Essential Services Maintenance Act in Modi-run Gujarat and other states in similar situations. Both sides agreed to meet, but the venue of the meeting became a  prestige issue as doctors insisted on her presence at NRS hospital while she wanted them to come over at the  state secretariat.

Both sides finally met on Sunday at the state headquarters as Mamata had wanted, but in front of the media, with representatives of junior doctors from all the medical colleges and hospitals of the state, as the protesting junior doctors had demanded.

The meeting predictably focussed more on doctors’ insecurity, overwork, and infrastructural inadequacies and less on patients’ troubles since there was no representation from any groups representing them. The agreement on ‘zero tolerance’ to attacks on doctors through better policing and prompt actions as well as public relations campaigns are welcome. But long-term solutions regarding infrastructural and manpower shortages as well as issues of attitude that often work as triggers for violence were glossed over.  Nevertheless, the unprecedented meeting that was televised live ended the cease-work with both sides appearing to enjoy a win-win situation. The fine print of the agreement and its implementations are yet to be seen. The episode, however, could be trendsetting in the making of a participatory democracy where politicians can’t refuse to talk to direct representatives of different sections of people.

The question is whether Mamata Banerjee, the street-fighter turned chief minister, will tackle the problems plaguing health services instead of pursuing quick but cosmetic solutions, or will she prove to be just another Janus-faced politician? At the same time, will the young doctors who have yet to sell out to market forces depend solely on police for security, or will they also care to connect to the patients’ hearts? Civil society groups too should join them in this connectivity campaign. After all, it has become a crucial social imperative in view of the BJP’s insistence on spreading its communal narrative of everyday conflicts.