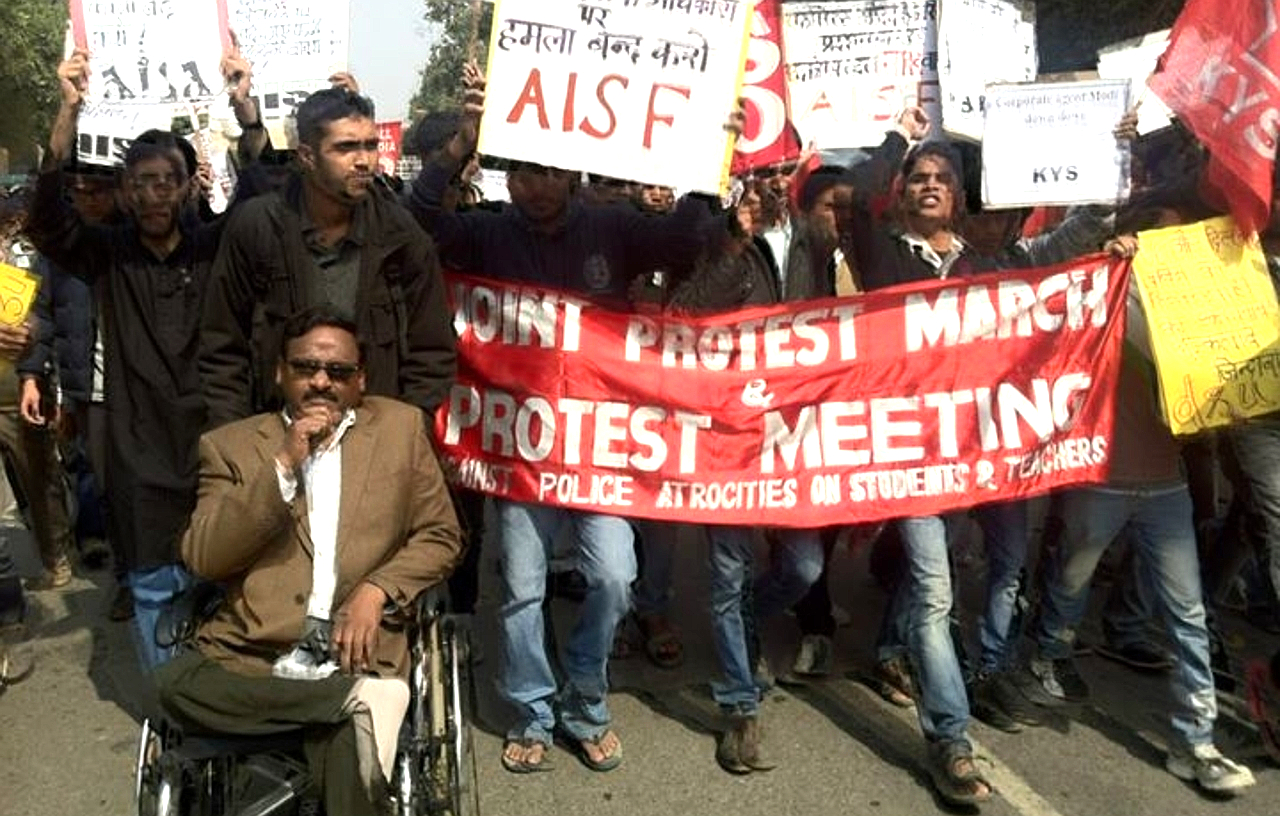 GN Saibaba’s latest letter from prison: “Please come as a team to meet me at the earliest”

In his latest letter sent from Nagpur prison, Prof. GN Saibaba of Delhi University has appealed to human rights activists to form a team and visit him and the jail authorities in order to ensure his proper medical treatment and his transfer to Hyderabad jail. The letter, dated 25th May 2019, a copy of which was obtained by GX, painfully narrates Prof. Saibaba’s worsening health, depression, and dehumanisation that he and his co-accused Adivasi prisoners – Vijay Tirki, Mahesh Tirki and Pandu Narote – have been going through as a result of his wrongful incarceration. A GroundXero report.

Prof. Saibaba, a wheel-chair-bound teacher with 90% physical disability was arrested in May 2014, after the police in Gadchiroli, Maharashtra, claimed he had links with Maoists. Saibaba was sentenced to life imprisonment in March 2017 by a sessions court after being found guilty of having ‘Maoist links’ and ‘waging war’ against the Indian state. He has been in Nagpur Central Jail since then. Vijay, Mahesh, and Pandu were also arrested in the same case, though separately from Prof. Saibaba, and have been in Nagpur prison for the past 5 years.

Vijay Tirki and Pandu Narote have been taking care of his daily needs in the Anda cell, “I do not want to give any more trouble to my co-accused. I also do not want any trouble and difficulties to be given to the prison officers. I want to find a solution to this problem,” he writes, while repeatedly appealing to fellow human rights activists to form a delegation and meet the Deputy Inspector General (DIG) (Prison) Nagpur, and Saibaba himself, to discuss and find a solution to the acute problems he and his co-accused are facing.

Saibaba had extensively campaigned against the Salwa Judum (a state sponsored private militia in Chhattisgarh) and the human rights violations that accompanied Operation Green Hunt against Adivasis in Central India launched by the UPA Government. “Apart from being 90% disabled, Saibaba is also suffering from at least 19 other serious health related issues which require immediate specialized and comprehensive medical treatment,” said his wife Vasantha. “There has been no treatment given to my major ailments at the Govt. civil hospital. The doctors there spent the past two years in medical investigations without concluding ever [sic]. In addition to my pain and suffering due to the severe ailments, psychologically I have been under great stress due to these circumstances. My disability has started playing heavily on me,” Sai wrote in his latest letter.

Saibaba has been confined in complete solitary confinement. The cell is like a deep well, with most of the ‘roof’ being nothing but an iron grid, open to the sky. The harsh sunlight and the rains reach the cell directly from the top. During monsoons the cell gets flooded. During summers, the sun hits directly, and the temperature inside the cell reached as high as 47.5 degrees. “The summer heat will continue at least till 20th June. I am not sure I can bear and survive this heat,” wrote Sai.

The letter, addressed to members of the Saibaba Defense Committee including human rights activists Prof. G. Haragopal, Adv. Ravindranath, Adv. Ravichandra, and Sai’s brother Dr. Ramdev, is a testament to the cruel and unusual nature of the Indian legal apparatus, and the torture centers that are the Indian prisons. “I write this letter to all four of you together for your immediate steps to be taken appropriately and visit me at the earliest,” he writes.

Several human rights organizations and renowned academics from across the world have repeatedly drawn the attention of the Indian Government towards the fast-deteriorating health of Prof. Saibaba and pleaded for his immediate release from prison. The United Nations has sent as many as 3 letters to the Indian Government expressing its concerns about how a person in need of constant medical attentionhas been kept in prolonged custody by the Government. While Hindutva terror-accused such as Maya Kodnani, Babu Bajrangi, Pragya Singh Thakur, and others have been released on bail by the Indian courts, repeated appeals by Prof. Saibaba’s wife and lawyers for his bail on medical grounds have been rejected by the court and vehemently opposed by the public prosecutor. On one such occasion, the Sessions Judge SS Shinde said, “Merely because Saibaba is 90% disabled is no ground to show him leniency… he is physically handicapped but he is mentally fit, a think-tank and a high-profile leader of banned organisations.” Prof. Saibaba has been kept in solitary confinement and prevented from talking to other prisoners on the grounds that he would “brainwash” them. Last year the lawyer who was representing Prof. Saibaba, Adv. Surendra Gadling, was also arrested on trumped up charges of “plotting to assassinate the PM”.

In his letter, Prof. Saibaba writes at length about the depression he has been going through because of this prolonged torturous incarceration.

“I have been under distress and gnawing depression for the last one month facing untold misery and helplessness. I wrote a short letter and sent to advocate Mr. Akash Sorde last week to inform you all about my state of affairs. I also asked him to call you to Nagpur to meet me and a delegation to meet the DIG (Prison) Nagpur to discuss and find out some solution to the acute problems I am facing. Here in this letter I briefly present the problem so that when you come to visit me I can place the rest of the issue in as short as possible…I have been going through several bouts of depression for the first time in my life. Despite my disability I never faced depression in all my life. I immersed myself in study, teaching and activism for human rights of my fellow citizens,” he wrote.

Sai penned his letter the same day he suffered a massive chest pain and a syncope attack while he was about to take his lunch sitting on his wheelchair, on 25th May (Saturday) at around 11.15 am.

“Instantly, I lost consciousness for about 120 seconds as per my later understanding. Two prisoners observing this attack from outside the cell ran inside and shifted me to the cot and informed the guards to call the prison doctor. Luckily the Anda cell in-charge jailor came running immediately and called other senior jailors and the doctor. He saved my life. The doctor came within 10 minutes and put one Solbitrate tablet under my tongue. As I came back to full consciousness after 10 minutes I could see all the prison officers including the senior jailor in my cell along with the doctor. They offered to shift me to the prison hospital to put me under observation and I.V. liquids, and if necessary to shift me to the Govt. hospital. But I suggested that I.V. fluids could be given to me inside my cell as the prison hospital would be inconvenient and inaccessible for me. They agreed with me and treated me in the cell itself and the prison officers instructed the doctor to stay back and observe my condition…I am thankful to the prison officers including the immediate in-charge jailor who took extreme cautious steps understanding my serious conditions at that time. But what can happen if the same attacks come during the middle of a [sic] night?”, he wrote.

For most of the remaining parts of the letter, Prof. Saibaba wrote about his concerns regarding his fellow co-accused, Mahesh, Vijay and Pandu – who have been taking care of his daily needs for 2 years now.

“I am profusely thankful to them for their services in the past more than two years (including the trial one). They should be relieved from my burden on their shoulders…My urgent appeal to you is to expedite their bail process. They should get bail as soon as possible. Please give this priority and talk to the senior counsel in Delhi. They are unnecessarily implicated in this case. They should have justice…I do not want to give any more trouble to my co-accused. I also do not want any trouble and difficulties to be given to the prison officers. I want to find a solution to this problem,” he wrote.

In conclusion, Prof. Saibaba writes, “After reading this letter and my earlier four latest letters written to Delhi, please come as a team to meet me at the earliest. I would like to present everything before the team separately and before the Superintendent of the Prison and DIG (Prison), Nagpur to find a temporary solution to my problems. The team/delegation needs to take prior appointment with DIG (Prison), Nagpur before coming to meet me.
Unless this is done my health and mental condition cannot be treated at least to maintain life as it is now.”

“Can anyone suggest me what can I do????

On 5th June, I received a letter from Prof G.N. Saibaba.

I am in tremendous shock after reading the letter. He got a severe chest pain on 25th May and consciousness. He was narrowly saved by jailor in-charge who took extreme cautious steps immediately, understanding his serious condition at that time. That happened in the morning when the doctor and other officials could run into the cell to give him life-saving treatment.
But what if the same attacks happen during the middle of the night?”