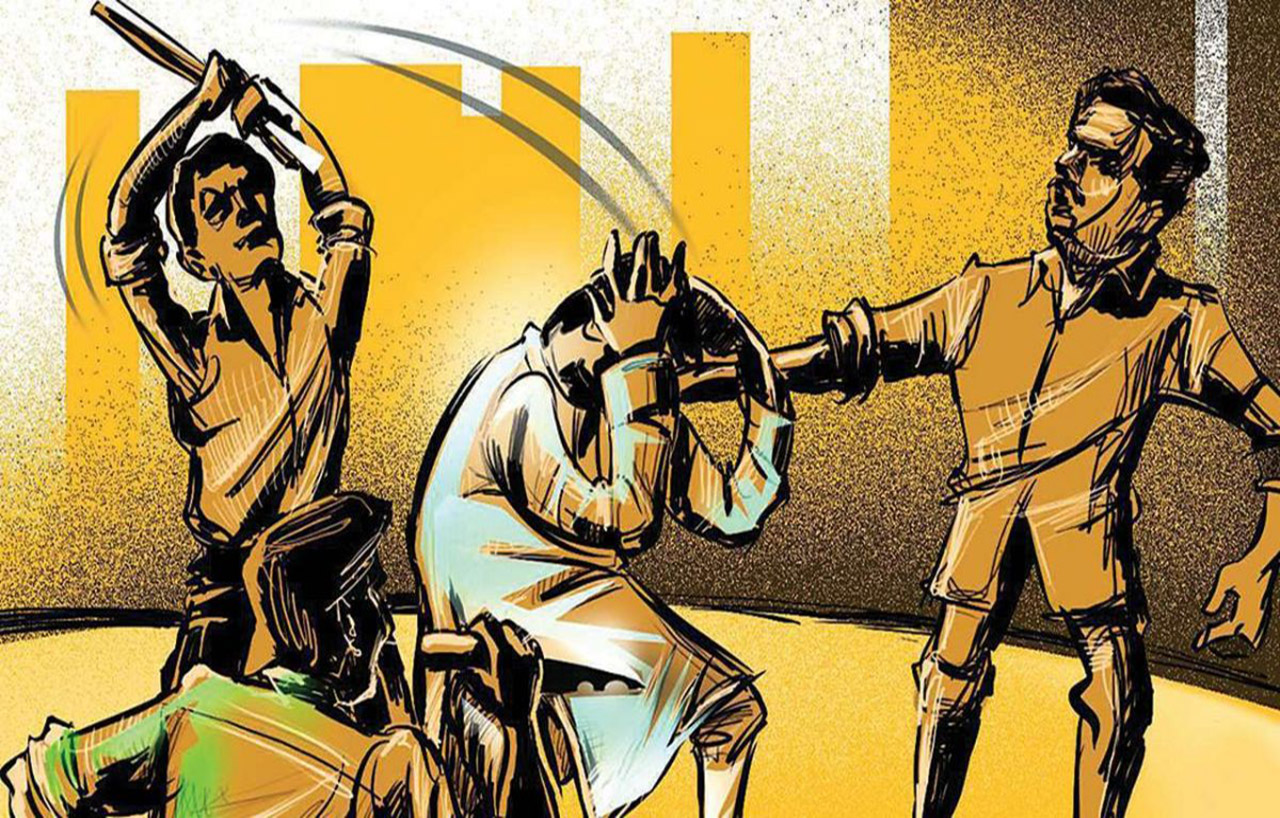 “Modiji has fulfilled the first part of his dream with his landslide victory in Lok Sabha polls. We are now fulfilling the other part by distributing knives and creating Hindu soldiers. If Hindus want to protect themselves and their nation, they should learn how to use weapons.” A GroundXero report.

2 days after coming back to power, PM Narendra Modi on last Saturday made a passionate speech promising to reach out to minorities, who he said had been cheated by successive governments in the past. “Our mantra should be sabka saath, sabka vikas and sabka vishwas (with all, for everybody’s development and by winning everyone’s trust),” he said. Several commentators welcomed the PM’s remarks. “They were kept in illusion, in a climate of fear and insecurity. They were misled by deceit. It would have been better if they were given education so that some good leaders emerged from the community, which could have become equal to other sections,” said Modi in his speech, referring to the Muslims.

Here is a (possibly incomplete) list of lynch attacks and hate crimes that took place across the country – in MP, Haryana, Bihar, WB and New Delhi – over just the past one week, starting literally within a day of the declaration of Election results on 23rd May. In most of the cases, those targeted were poor working-class Muslims.

In a shocking incident, two Muslim men and a woman were battered by Gau Rakshaks in Madhya Pradesh’s Seoni. The victims were forced to chant ‘Jai Shree Ram’  by the accused. The incident was videographed, and the video went viral on social media.

The meat was sent to the forensic lab for testing, and the victims have also been arrested by the police along with the accused, and charged under Cow Protection laws. The prime accused, […], is allegedly linked to the newly elected terror-accused MP from the state, Pragya Singh Thakur.

Jeetrai Hansda, a professor at the Government School and College for Women, Sakchi, in Jharkhand was arrested on Saturday against the complaint filed for posting a comment on Facebook in 2017. In the post, Hansda had asserted that Indian adivasi communities have had long traditions of eating beef and ceremonial cow sacrifice. “It is their democratic and cultural right to consume the meat. The post also said that they oppose India’s laws on eating beef and that his community also consumes peacocks, the country’s national bird. He also expressed his unwillingness to follow Hindu customs. The complaint against the post was filed by communal [student] organisation Akhil Bhartiya Vidyarthi Parishad, [the student wing of the RSS]”, says the Huff Post report. ABVP demanded the University must expel him, after which Hansda was stopped from coming to the University and later even suspended.

May 26: “Muslim man beaten up in Gurugram, told to remove skullcap and chant Jai Shri Ram” – The Hindu

“One of the men called me with an offensive word and told me that skullcap was not allowed in this area. When I told him that I was returning from a mosque, he slapped me. He also asked me to chant Bharat Mata Ki Jai and Jai Shri Ram. When I refused, he threatened to feed me pork,” said Mohammad Barkat. Barkat, 25, was returning to his small tailoring shop around 10 p.m. on Saturday after offering prayers at Jama Masjid in Gurgaon when a group of about half a dozen men allegedly accosted him outside a sweet shop and told him to remove his skull cap, and eventually beat him up.

May 26: “Man shot at in Begusarai after he reveals his ‘Muslim name’” – The Hindu

“I was stopped by Rajiv Yadav and he asked for my name… when I told him, he fired on me, saying “What are you doing here? You should go to Pakistan,” … Rajiv Yadav was drunk and when he started loading another cartridge in his pistol, I pushed him and fled leaving my motorcycle.” said the injured Mohd. Qasim in a video that went viral on social media.

“He is still critical. Doctors are scheduled to operate on him to remove the bullet,” Mohd. Javed, his brother told, according to The Hindu report. “Yes, we’re feeling threatened after the incident…The accused has not been arrested yet,” he reportedly added. Mohd. Qasim is a street vendor.

“I along with a friend around 10 PM was returning from the canteen after dinner when we saw a group of 10-12 men standing on the road. We were walking on our own but after noticing my attire they started shouting ‘Jai Shri Ram’ while pointing fingers at us. Later they started thumping their feet to intimidate us. We immediately ran away to save ourselves,” said the 23 year old final-year medical student at a Jalpaiguri college who was threatened and intimidated by a group of 10-12 men chanting ‘Jai Shri Ram’ inside the institution campus on Saturday. “I am a hijab-wearing Muslim, I always wear this attire. I have never faced such harassment in my life. There was no one in the street that day to save us. Is this how we have to live now?”, she asked.

Eminent gynaecologist and noted author Dr. Arun Gadre was reportedly surrounded by a gang of youths in New Delhi’s Connaught Place area and asked his religion while being forced to chant ‘Jai Shri Ram’.

“On 26 May, I was taking a morning walk in Delhiat around 6 a.m. near the YMCA. Suddenly, few youths [confronted me] and asked me to say ‘Jai Shri Ram’. I was a little taken aback and said it. They insisted I say it loudly. I just walked away and they let me. I was not physically manhandled…I did not want to make it public nor report it to the police because I thought it to be trivial…I request everyone to treat it as trivial and not draw any conclusion,” said Dr. Gadre.

Five Muslim women, belonging to one family, were stopped from travelling on the Lucknow Metro after they refused to remove their veils. The women had no reservations about being frisked and checked by women security personnel, but there were none at the metro station and the male security guards refused to allow the group to board the Metro without being frisked.

“The Akhil Bharat Hindu Mahasabha (ABHM)’s National Secretary, Puja Shakun Pandey said that this was a step to motivate Hindus and empower them, especially the younger generation, with knives to protect themselves.

ABHM distributed knives among students of class 10 to 12, to commemorate the birth anniversary of Hindu Mahasabha leader, Vinayak Damodar Savarkar on Tuesday, its spokesperson said,” says the report.

“Modiji has fulfilled the first part of his dream with his landslide victory in Lok Sabha polls. We are now fulfilling the other part by distributing knives and creating Hindu soldiers. If Hindus want to protect themselves and their nation, they should learn how to use weapons,” said Ashok Pandey, spokesperson of the organisation.

The terrorist act happened in Singampalli village panchayat of Rangampeta mandal in East Godavari district of Andhra Pradesh on Wednesday. Bikki Srinivas (30), a Dalit man, allegedly stole mangoes from an orchard in the village belonging to an upper caste man.

“The orchard owner and others chased and caught him. They thrashed him with sticks leading to his death. Srinivas’s body was later taken to the panchayat office and hanged from the ceiling. It was alleged that the upper caste people tried to project that he committed suicide by hanging himself as he felt humiliated after being caught while stealing mangoes from the orchard,” reports Caravan.

Usha Thakur, an MLA from Indore who is known for her extremist views, revived the debate on Godse on Wednesday saying that Godse was a nationalist and that he was concerned for the country.

A week earlier, BJP’s Pragya Thakur kicked up a massive row for calling MK Gandhi’s assassin a patriot, seeking public condemnation from even Narendra Modi. Usha Thakur said, “Godse was a nationalist who was concerned about the nation all his life. The circumstances under which he decided to assassinate Gandhi ji were known to him only.”

The Village Development Committee in Balkonda, Nizamabad district, has decided to levy heavy penalty on those who maintain any social or commercial relations with the Muslims in the village.

According to a published report, the VDC is targeting Muslims with social and commercial boycott to pressurize them to give up their claim over a graveyard. The committee said that any person who speaks with a Muslim will be penalized with Rs 5000 and if he or she drinks tea at a Muslim owned restaurant the penalty will be Rs. 20,000. Also, if a non-Muslim buys anything from a general store of a Muslim he would be levied with a fine of Rs 20,000. The non-Muslim will also be penalized for traveling in auto-rickshaws driven by Muslims.

A 14-year-old Dalit girl was raped and burnt to death in Uttar Pradesh’s Muzaffarnagar last Friday. While her family say the administration is trying to hush up the matter, police is yet to make any arrests although seven accused have been booked in the case.

According to an Indian Express report, the girl’s charred body was found at a makeshift room next to the brick kiln she used to work at.

An old Muslim man and her daughter were captured and tied to a tree for opposing land capture by influential villagers. The incident took place in the Bhuswar village in Samastipur district of Bihar. Vibhutipur police said an influential villager was fencing off the land belonging to Rahim Miyan. He and his daughter Ruksana protested. The muscle-men of the accused caught both of them, tied to a tree and assaulted badly.

In other news of officially administered attacks on vulnerable communities…

52-year-old Mohammed Sanaullah, who had joined the Indian Army in 1987 served it for 30 years, and was also conferred upon a Presidents’ Certificate for his promotion to the rank of Junior Commissioned Officer. Sonaullah was arrested and sent to detention camp after a Foreigners’ Tribunal in Assam declared him a foreigner on May 23.

Mohammed Sanaullah is from Kolohikas village in Assam’s Kamrup district and was declared a ‘foreigner’ by the Boko Foreigners’ Tribunal. During his military career, he had put in labour for Indian nation building project through three “Counter Insurgency operations” with 26 Rashtriya Rifles in Doda district of J&K and 33 Field Workshop in Kupwara near the LoC from 2015 to 2017. He was also part of CI operations in Imphal West district of Manipur from 2007-2010.

May 29: Pellet horror returns in Kashmir, 90 injured in Shopian, Kulgam – The Kashmir Press

“At least ninety persons sustained fire arm injuries, sixty of them from pellets, after they clashed with the government forces in South Kashmir’s Kulgam and Shopian districts. One of the injured includes, Yawar Ahmad, who received bullet in his abdomen at Kulgam and is reported to be in critical condition.

In Kulgam clashes erupted after youth tried to break the cordon laid down by the forces to save the trapped militants after the pre-dawn Ramzan meals were over. Thousands of people thronged the gunfight site at Mohamadpura, Kulgam and clashed with government forces.

In the meanwhile, people took to streets and clashed with government forces following which the police and paramilitary forces resorted to teargas shelling, pellets and live ammunition in which 60 persons suffered injuries,” reports The Kashmir Press.