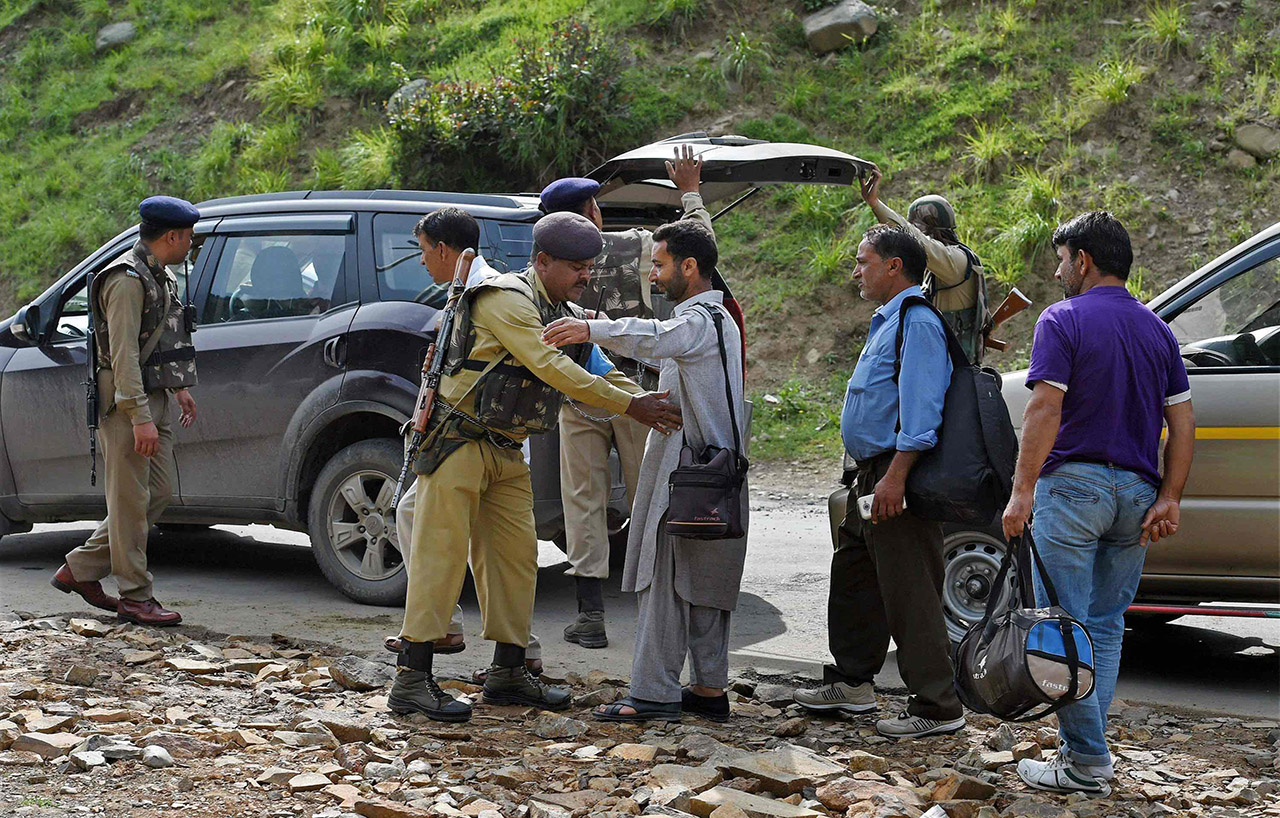 Torture: Indian State’s Instrument of Control in Jammu and Kashmir

On 20 May, 2019, Association of Parents of Disappeared Persons (APDP) and the Jammu Kashmir Coalition of Civil Society (JKCCS) released a first comprehensive report on ‘torture’ in Jammu and Kashmir. The report titled ‘Torture: Indian State’s Instrument of Control in Indian Administered Jammu and Kashmir’ focuses on the systematic use of torture in Jammu and Kashmir by the Indian State from 1990 onwards. A GroundXero report.

“Till I am alive, I will continue to fight for justice and speak truth to power” – A Kashmiri torture survivor 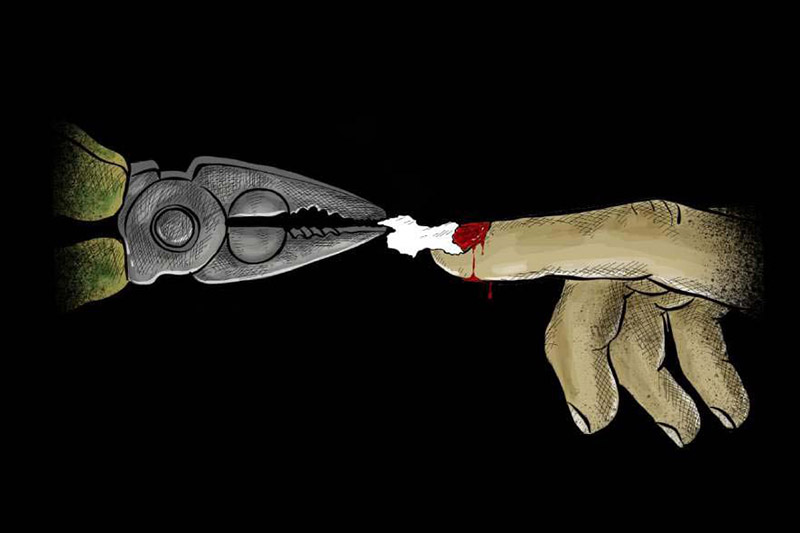 Torture: Indian State’s Instrument of Control in Indian-administered Jammu and Kashmir is the first comprehensive report, which focuses solely on torture, that has been perpetrated systematically and indiscriminately by the Indian State since 1947, and has intensified further since the armed struggle for self-determination began in the late 1980s. Torture is the most under-reported human rights violation perpetrated by the Indian State to quash even the slightest dissent in India-ruled Kashmir.

The widespread use of torture by security forces on political prisoners and ‘militants’ or ‘terrorists’ continues unabatedly in most countries throughout the world. Despite global attention and condemnation of state-sponsored torture by human rights organizations and agencies following public revelations of such instances of torture, torture of political prisoners in a systematic and institutional manner by the state — often aided and abetted by the executive-legislature-judiciary-armed forces nexus —   has become an important political tool to quash political dissent and people’s rebellion. In fact, torture has become an accepted political policy.

India is no exception to this rule. Torture of political prisoners, along with custodial deaths, encounter killings, and forced disappearances have been a common practice amongst the Indian security forces, while operating in conflict areas such as Kashmir, Manipur and Maoism-influenced adivasi villages across the country. The disproportionate presence of Indian armed forces and police in Jammu and Kashmir (between  650,000 – 750,000) is mainly to exercise control over the local population.

The report by APDP and JKCSS, whilefocusing on torture perpetuated by the Indian security forces in Jammu and Kashmir since 1990’s, also provides a contextual understanding of the historical background to the use of torture in the state since1947 in order to curb the aspirations of Kashmiri people’s right to self determination. The report, based on 432 case studies, points out that torture has been used in Kashmir by various Indian agencies (including armed forces), without any distinction of the political affiliation, gender or age. The modes of torture used are similar in cases of combatants and non-combatants. 70% (301 out of 432) of torture victims are civilians – which include women, students and juveniles, political activists, human rights activists and journalists and 5 were ex-militants i.e., people who had already shunned militancy and had no involvement in any militancy related activity when tortured. 258 civilians did not have any affiliations with any organisation, political or otherwise. 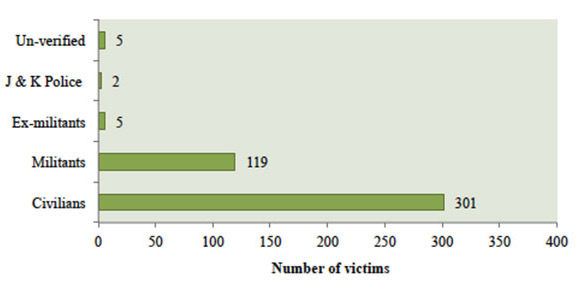 Figure 1 : Affiliations of the 432 victims of torture

This report documents the vast number of methods of torture and other cruel, inhuman and degrading treatment or punishment that continue to be perpetrated in Jammu and Kashmir. The forms of torture that have been mentioned in this report include, but are not limited to, stripping the detainees naked, beating with sticks, iron rods or leather belts, roller treatment, water-boarding, dunking detainees’ head in water, electrocution in several parts of the body, including in the genital area, hanging from the ceiling — mostly upside down — burning of the body with hot objects, solitary confinement, sleep deprivation, sexual torture including rape and sodomy. 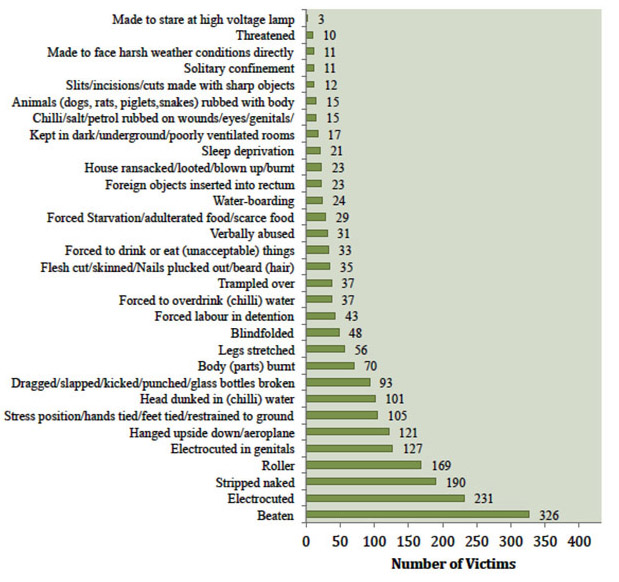 Figure 2: Number of people out of 432 subjected to different forms of torture

Apart from the above mentioned forms of inhuman torture, the report also mentions how entire populations in Kashmir have been subjected to collective punishments. The different forms of collective punishment are Cordon and Search Operations (CASOs), communication controls (internet ban and media gag), use of pepper gas, vandalism of properties (whether residential or commercial), sexual violence, torture, etc. In the 432 case studies for this report, it has been found that at least 80 had been tortured during CASOs, raids or at checkpoints.

The people of Kashmir have experienced repeated molestations, rapes and loots during CASOs. One such incident that haunts the public memory and continues to embarrass the Indian state is that of the mass rapes in Kunan and Poshpora. On the night of February 23/24, 1991, armed troopers from 4 Rajputana Rifles, 68 Mountain Brigade camped at Trehgam, and cordoned off the twin villages of Kunan and Poshpora in Kupwara District at around 11:30 pm in the night. During the cordon, the army personnel dragged out all the men and took them to a kuthar, a makeshift barn, where they were tortured. They were given electric shocks in their body parts, most specifically to their private parts, and water-boarded. More than 35 women irrespective of their age, marital status, pregnancy etc., were then gang raped by the army personnel till 9 am the next day. The victims ranged in the age group of 13 to 80.

The report provides an insight into how torture has ruined the lives of survivors with a multitude of them suffering from chronic ailments resulting from the torture. Apart from physical ailments, people who have been tortured or even witnessed it, have suffered from long-standing psychological issues such as post-traumatic stress disorder (PTSD). 49 of the 432 victims of torture dealt with in this report have died post-torture, 40 of them as a result of the injuries received during their torture. Since many of the health issues due to torture-related injuries cannot be traced immediately, but might manifest after years or even decades, accurate figures of such fatalities and morbidity are extremely hard to estimate. 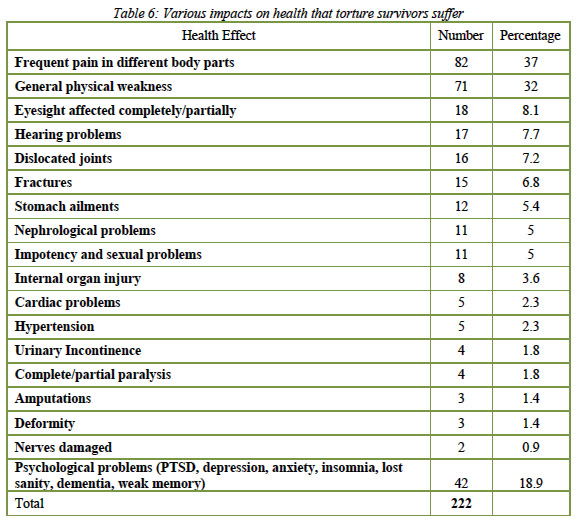 In Kashmir, torture has also been associated with other human rights violations like custodial deaths and enforced disappearances. And it is only when a case of torture is accompanied by such human rights violations, that it gets reported in the mainstream media. As a result, torture has remained unnoticed and survivors continue to suffer in silence. The report notes that due to legal, political and moral impunity extended to the armed forces under the Armed Forces Special Power Act (AFSPA), not a single prosecution has taken place in any case of human rights violations in Jammu and Kashmir. In other words, torture has been given a kind of legitimacy in Kashmir, which is rarely talked or written about in Indian mainstream media. 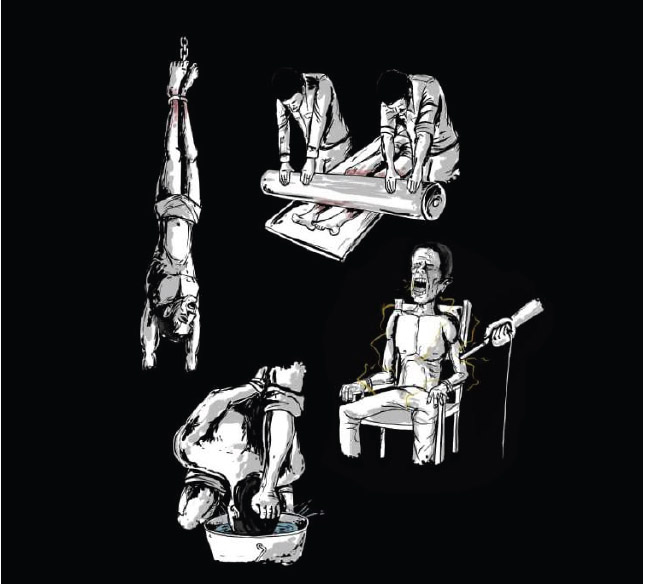 In fact, torture is used as a matter of policy by the Indian State in Jammu and Kashmir in a systematic and institutional manner, and all the institutions of the state, be it legislative, executive, judiciary or the armed forces. have been complicit in it in one way or the other. Policies of the Indian state, like ‘Operation All Out’ launched after the attack on the 2017 Amarnath Yatra still continue in Kashmir under which the army has been given a “free hand”, emboldening the armed forces to continue perpetrating torture as a weapon to crush dissent. The report recommends  an international investigation on torture in Kashmir, led by UN Office of the High Commissioner for Human Rights, besides urging India to ratify the UN Convention against Torture and end the phenomenon of torture.

There is no doubt that the Indian State will also dismiss this report as ‘lies’ and ‘propaganda’ by human rights groups as have been the case with various other such reports on Kashmir. In July 2018, the Office of the United Nations High Commissioner for Human Rights (OHCHR) released a report on the human-rights conditions in Jammu and Kashmir as well as Pakistan-Administered Kashmir, and Gilgit-Baltistan.The United Nations report noted that Indian security forces in Kashmir have used “excessive force” that led to “unlawful killings and a very high number of injuries.” OHCHR called on the Indian authorities to “establish independent, impartial and credible investigations to probe all civilian killings which have occurred since July 2016”; to immediately order “the end of the use of pellet-firing shotguns”; to “urgently repeal” the AFSPA; and to “fully respect the right of self-determination of the people of Kashmir as protected under international law.”  The Indian government however rejected the OHCHR’s findings. The Ministry of External Affairs termed the report “fallacious, tendentious and motivated,” and described it as a “selective compilation of largely unverified statements.” The MEA said that the report “violates India’s sovereignty and territorial integrity.”

Very recently, the United Nations Human Rights Council (UNHRC), in a  letter drafted by three special rapporteurs to the Indian government, has asked  for details on steps taken to punish the guilty or provide justice to victims and their next of kin in 76 cases of torture and arbitrary killings in Jammu Kashmir since 1990, including 13 just in 2018. The letter has been made public on the UNHRC website on May 18, along with India’s reply that it refused to provide any clarifications.

As far as the Indian government is concerned, the report by APDP and JKCSS on torture, too, will be summarily rejected and no corrective measures can be expected from the government. We end this report by quoting Juan E. Mendez, former UN Special Rapporteur on Torture (2010-16) :

“I am under no illusion that an independent report by nongovernmental organizations can put an end to torture, in India or elsewhere. But I am convinced that a report, when it is as rigorous, evidence-based and persuasive as this one is, constitutes a building block towards public awareness of the tragedy of torture. It can also spearhead democratic debate about measures of public policy needed to re-establish the rule of law in this extremely sensitive area. In that sense, the report and the debate that it will produce will be an enormous contribution to the struggle to abolish torture in practice, in India and everywhere.” 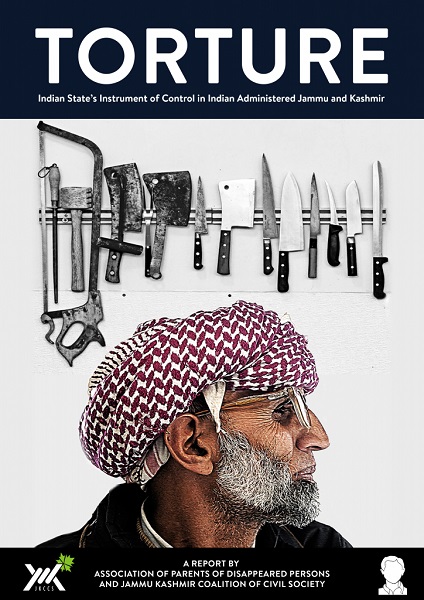 Cover Image is of Army frisking locals during Amarnath-yatra. Pic Credit PTI/S. Irfan. All other images used are taken from the report titled ‘Torture: Indian State’s Instrument of Control in Indian Administered Jammu and Kashmir’, brought out by APDP and JKCCS.