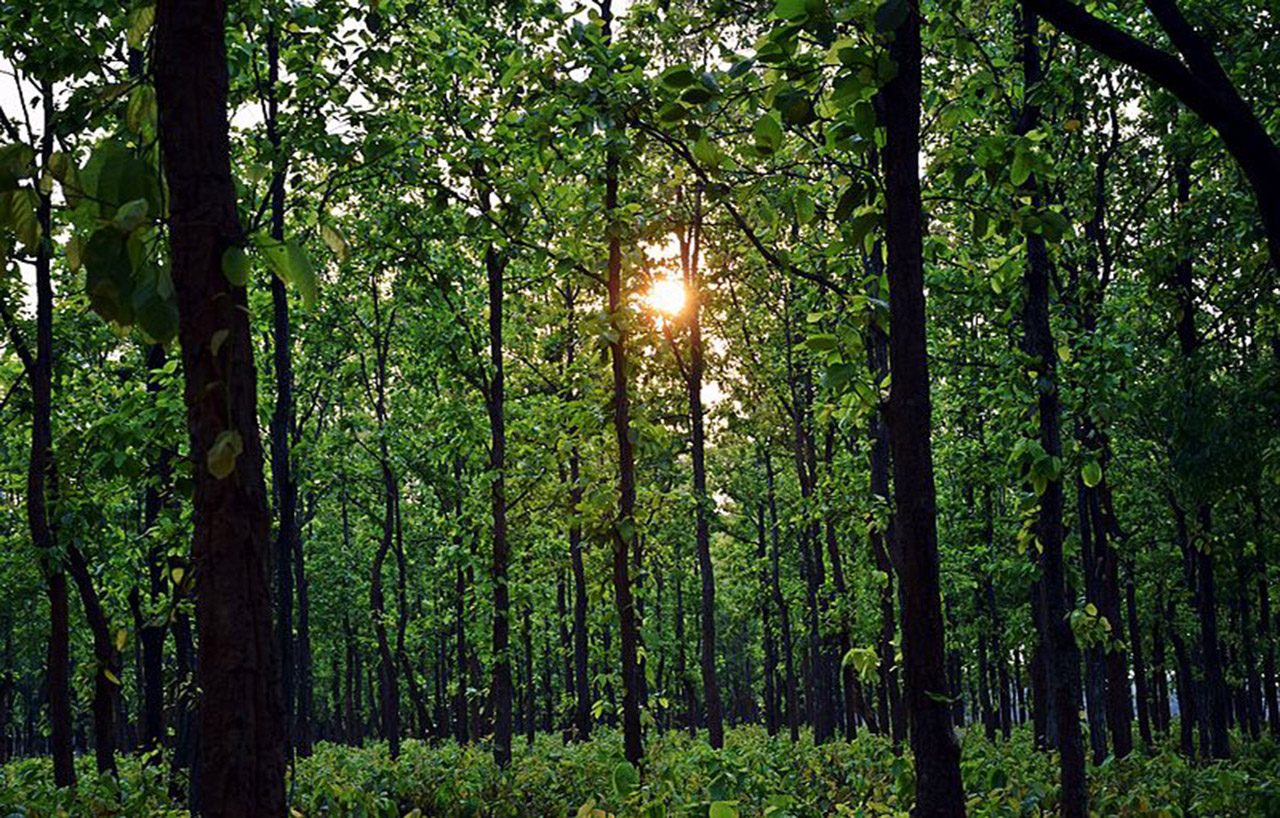 Forests Are Our Lifeline And They Are Receding

Climate change threatens the very possibility of life on this planet. The dominant narrative of climate change is built around the reduction of emissions and the replacement of energy sources which ultimately goes to serve the interests of the same forces that have created the problem in the first place. The voice of the communities who live closest to nature, who understand the complex interconnections, who actively defend ecological habitats against degradation, are left out. The first organized rebellion against the British in 1772 was against the capture of forests and their resources. It was led by Tilka Manjhi in the Chhotanagpur Plateau (in present-day Jharkhand). Climate change was not a word coined two and half centuries ago and many communities living in the forests of Jharkhand, Chhattisgarh, Odisha, Bengal, and Bihar still do not relate to its dominant narratives. But they understand perhaps more clearly than anyone that there would be no life without forests and trees, so they stand up to large corporations that attempt to grab resources everyday. Somnath Mukherji writes.

Even in times of severe drought, the Santhali community in the Pakur district of Jharkhand will not touch the Jaher Than for fruits, flowers, or fuel. It is their sacred grove. As a result, this small piece of forest has thrived for generations with a huge variety of flora while the hills around the village have been denuded leaving a few sad silhouettes of trees sticking out into the sky from the ridge – a stark reminder of what was. Forests regulate the carbon, nitrogen and phosphorus cycle as well as the hydrological cycle. They directly support 100 million human lives in India, half of which are adivasis. Forests form the ecological base on which all diverse forms of life on earth thrive. The forests across the world hold enough carbon which if released would shoot up the total emissions by 33 times. 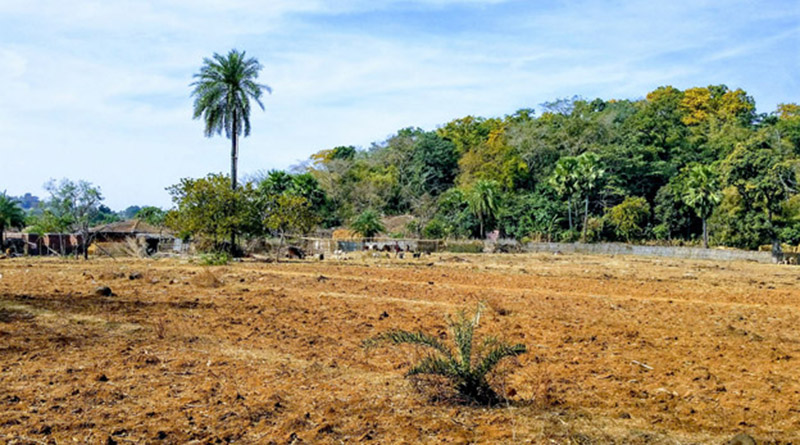 Pic: A sacred grove in a village in Pakur, Jharkhand protected by the community

Life on earth was made possible by trees in foreststhat evolved from phytoplanktons and absorbed carbon from an atmosphere full of CO2 and water vapour, about 4 billion years ago. They slowly stored the carbon in its body and made the atmosphere breathable helping life to blossom. As trees died, the stored carbon went under the earth and over time became coal and oil – the same fossil fuel that we happily burn today returning the CO2 to the atmosphere. We are reversing a life enabling process of cleaning the atmosphere that took millions years.

The systematized onslaught on India’s forests started with the establishment of the colonial Forest Department in 1864 and the first Forest Act of 1878. The state apparatus, through the Forest Department, viewed the forests of India as “resources” waiting to be extracted, and started shifting their ownership from communities to the state. The violent establishment of state-control by undoing traditional community rights set up a perpetual conflict between the people and the Forest Department that has not ended to date. It is no coincidence that the first resistance to British rule came from the adivasis of Santhal Parganas – Tilka Manjhi, Phulo and Jano Murmu, Sidhu-Kanu, Birsa Munda are a few familiar names, but entire communities had risen in revolt. 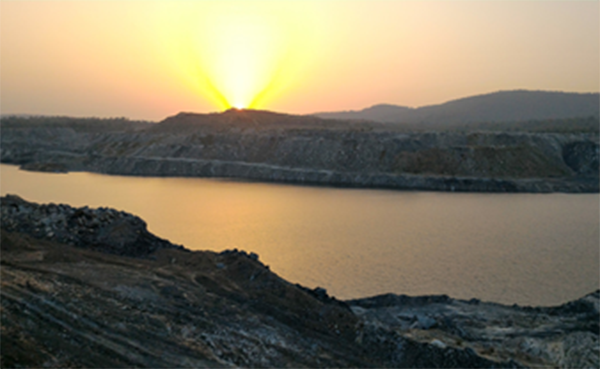 Since 1980,15000 sq Km of forestshave been diverted for non-forest purposes. One third of it was swallowed up by mining alone followed by defence and hydroelectric projects. The Ministry of Environment and Forest has recently given clearance to divert 840 hectares of pristine forestsin Surguja and Surajpur districts of Chhattisgarh for a coal block. The Forest Survey of India Report (2017) puts the forest cover of India at 21% which includes degraded forests, severely degraded forests, open forests and plantations. Plantations are incapable of replacing the complex ecosystems of a forest, nor can they support biodiversity like the natural forests or regulate the hydrological cycle.

Pointing to the straight line of trees in a plantation forest, a villager in the Buxa Tiger Reserve in North Bengal explained how big animals like elephants, tigers, or rhinoceroses cannot live in plantations because of the clear line of sight through the trees. Monoculture plantations impede the growth of brush or other plants at a lower height which means smaller animals cannot feed. This in turn limits the survival of big animals. People living in forests for centuries have very deep understanding of the forests and comprehend the complexities of the web of life. 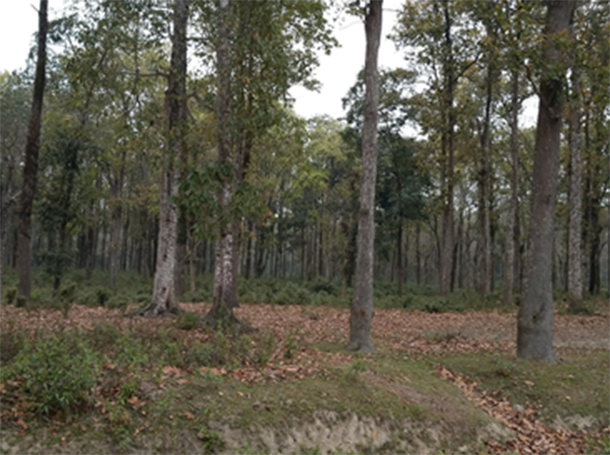 Pic: Plantations give clear line of sight & are uniform.

Imagine breaking up your 3 BHK apartment and allocating the 3 Bs in 3 different neighborhoods and the kitchen with only 1B. Such a house would have no meaning even if the square footage added up to the original. Measuring forest cover alone fails to captures such fragmentation that makes life impossible for animals. Migratory paths of elephants are routinely broken up forcing them into the villages in search of food or death by collision with trains running through these forested areas.

Huge tracts of land once covered by dense forests in Jharkhand have turned into deserts. Droughts are getting increasingly severe in these areas, despite a good annual rainfall of 1200mm to 1300mm. In absence of the forests, rains quickly run off into the river and sea, taking along with it the precious topsoil – which makes it difficult for forests to regrow. Agriculture, human health, and food security are but a few things that are severely affected. The Santhal and Paharia communities understand the direct connection between forests and the rain and speak of how the rains come down very quickly these days and the water runs off fast, leaving the communities high and dry. 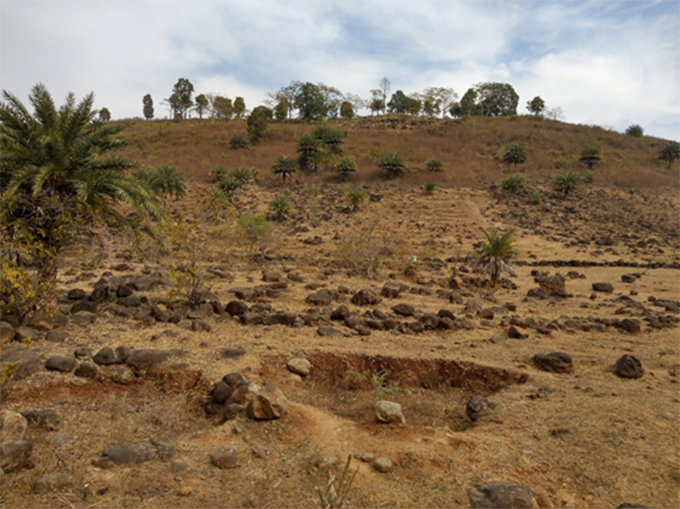 Pic: Once covered by forests, large tracts of land are desertifying in Jharkhand

Droughts force a large number of people in rural India to migrate in distress, in search of livelihoods. Today 54% of India faces acute water stress. India loses 23 hectares of dryland to desertification every minute or 14 sq km of dryland turns into desert every hour.

In our conversations over the years, almost everysuch community in Bengal, Jharkhand, and Odisha have recorded the loss of forest as being responsible for the extinction of animals. An elderly man in Dumka said, even 2 or 3 decades ago, they would not go close to the forest after 4pm because it was full of wild animals. Later in the day, we walked with them into the forest where they showed us a tiger’s lair, which needless to say lay abandoned. Now they are lucky if they see a rabbit. According to a WWF report, 60% of mammals, birds, fish, and reptiles have been wiped out by human activity. The same person identified at least 10 varieties of herbs in the forest as we followed him. The indigenous knowledge of the people is far deeper and comprehensive compared to that of a colonial institution like the Forest Department. Conservation, sustenance, livelihood, and protection of the forests are indistinguishable for the Adivasi community and are deeply ingrained in their humane worldview. In a recent Scientific American article, Madhav Gadgil has written about the adivasis’ sacred groves in India.

We met women in Koderma and Pakur who take turns patrolling hundreds of hectares of forest on foot every day to protect it from logging. The most amazing thing is that they have been doing it for the last 20 years. These are hard working women who work in the fields, draw water from the well, and manage their households among other things. They showed us the ponds they had excavated inside the forests so that animals and birds could quench their thirst in the summer. Academic journals are not able to capture such precious indigenous knowledge – only the lives of these people can which unfortunately are under threat. 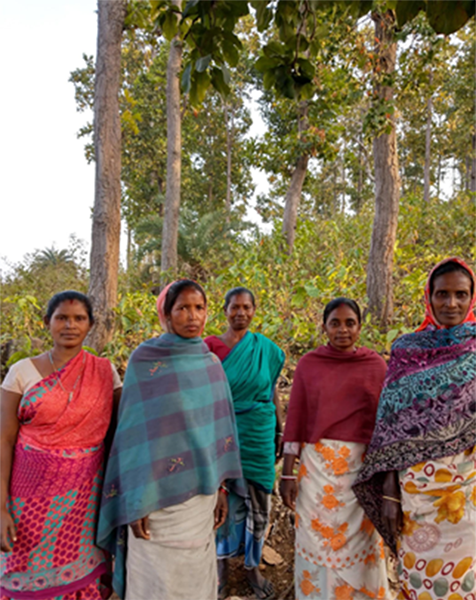 The present economic engine is insatiably eating away our ecological base and magnifying and exacerbating the existing inequity. Today 1% of population of India holds 50% of the country’s wealth. The coal, minerals, even topsoil that have been created patiently by nature over millions of years are being used up frivolously to benefit a thin creamy layer. A big part of the formally educated urban population is at best unaware of the massive destruction; others are active cogs in the wheel facilitating this destruction, blissfully unaware that no one is immune from the collapse that propagates through the web of life and will reach everyone sooner or later.

What we do today about the forests might define whether human society makes a corrective turn towards a livable and just world or whether it continues to careen towards complete breakdown by strengthening the oppressive economic, social and political structures that hold iniquitous relations together. Villagers fighting displacement by coal mines in the pristine forests of northern Chhattisgarh said, “Jungle se hi paani hai aur paani se hi jeevan hai” – Forests give us water and water gives us life.

The author is a social activist and writer.