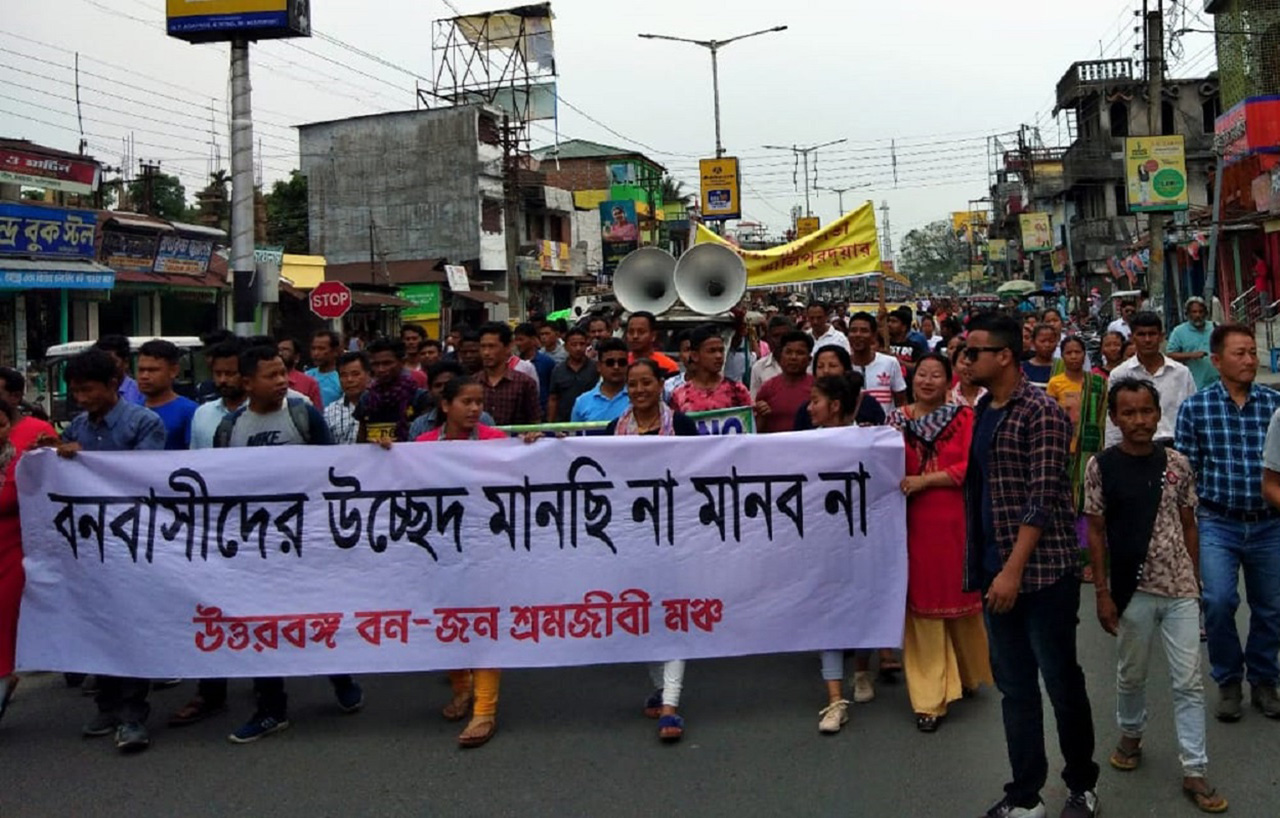 Thousands of Adivasis and Other Forest Dwellers Marched in Alipurduar Town

Today, 22 April 2019, as the world celebrates Earth Day with the theme ‘Protect our Species’, thousands of adivasis and other forest dwellers from the Dooars forests of North Bengal staged a historic march in Alipurduar town. People from far away forest areas in the Indo-Bhutan border and remote mountain villages in the Buxa Hills took part in the march, along with people living in the vast floodplains of Torsa, Raidak and Jayanti rivers. A GroundXero report.

All the indigenous communities of the North Bengal forests – the Rava, Mech, Jharkhandis, Dukpa and the Nepalese speaking Gorkha came to Alipurduar, demanding an end to the threat of eviction and asserting rights over their forest habitats. Organised by Uttar Banga Bon Jon Shromojivi Manch, a constituent group of the All India Forum of Forest Movements (AIFFM), the protest march is the forest communities’ response to the Supreme Court order on 13thFebruary 2019 for mass eviction of millions of tribals and other traditional forest dwellers whose claims for recognition of forest rights have been finally rejected. Though the order has subsequently been put on hold, the threat remains and today’s protest march sent a strong message to the Indian state that any attempt to evict forest dwellers, sanctioned by the Court or not, would be resisted.

Rally in Alipurduar town of North Bengal by forest dwellers

Our Gram Sabhas would determine which claims would be recognized — and if needed rejected — and not the Court or government officers, said the marchers, we are not going to leave our forests, because if we go away, not only our life and livelihoods would be at stake, but also the forests would be lost. It is us, the forest villagers, who planted millions of trees and took care of those for all these years and gave precious revenue to government, said they. Why don’t you recognise our unpaid labour and sacrifice and allow us to take care of our forests, asked the marchers, demanding that the Forest Rights Act is implemented. Why are you afraid of forest dwellers and their rights and powers, people asked the Indian state. We don’t like those urban environmentalists who see the wild life in a forest as something intrinsically separate from forest dwellers and think that more rights to people mean destruction of wildlife, said the angry marchers. These so-called forest and animal lovers don’t know what a forest is, said they.

The march took place despite organised attempts to thwart it by the local administration and police. Originally scheduled for 18 March before elections in North Bengal, the programme had to be postponed once because of undue pressure from the administration and has been rescheduled for 22 April after elections in North Bengal will be over. However, BDO of Kalchini and IC of Kalchini PS have been once again trying to stop the rally saying that it can’t be ‘officially permitted’ because ‘model code of conduct’ is still in place.  The local police entered forest villages and threatened the people and leading activists with summary arrests if they take part in the march. But the forest dwellers of North Bengal Dooars, facing such threats from the police, came in thousands to the Alipurduar march, and added a new chapter to the long struggle for forest rights, autonomy and dignity in the region. 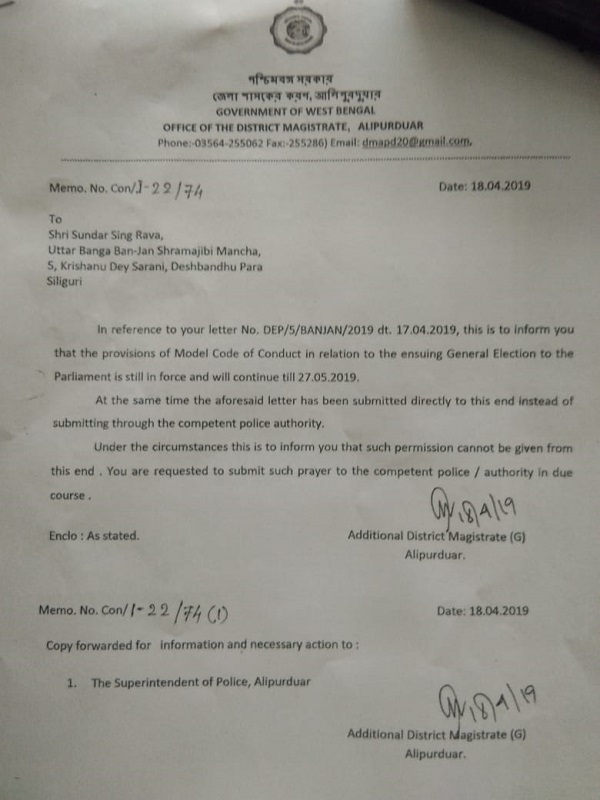 From the seven thousand marchers in Alipurduar town, the message to the state was clear: Your wish to evict us would be resisted. We won’t let you succeed, we would not leave our forests.