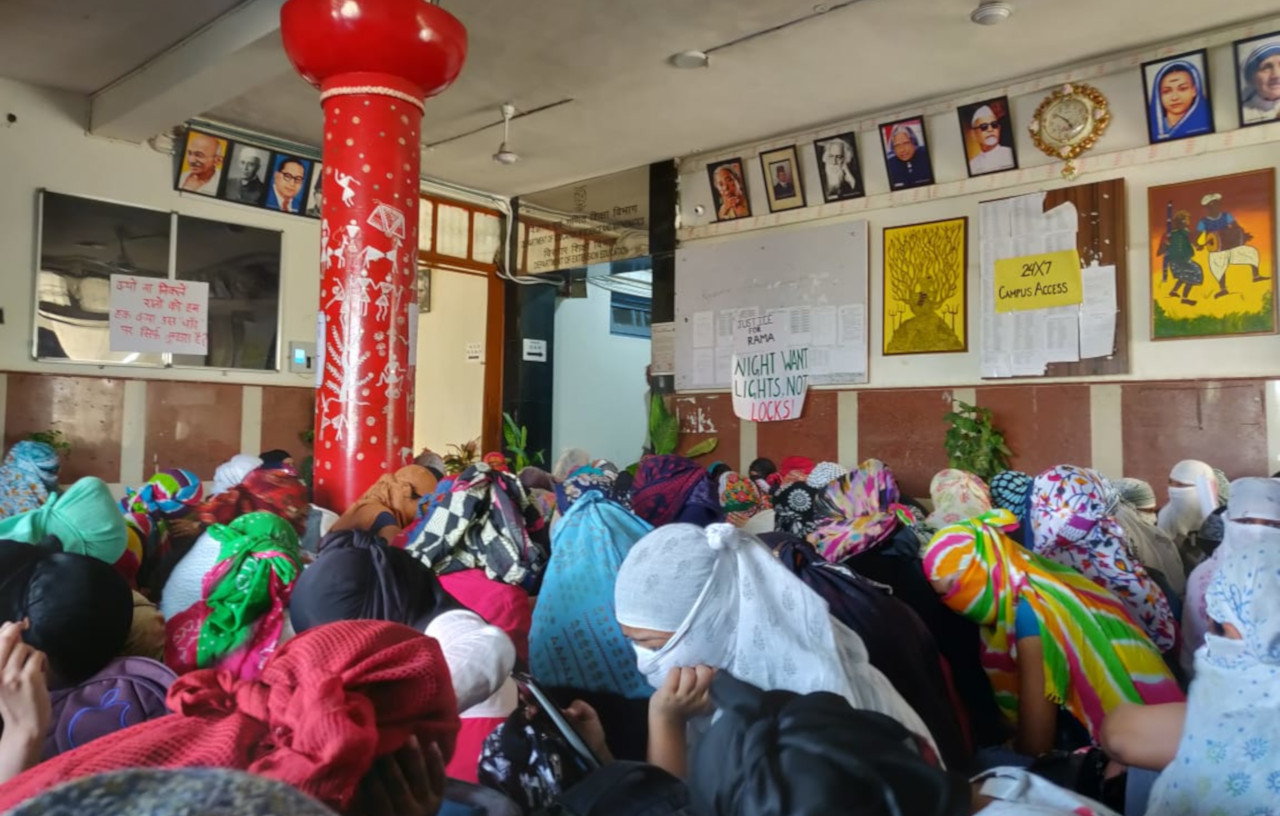 Women at RIE Bhopal have been demanding an extension of curfew timings, clean water on campus, 24*7 library access, resignation of the Chief Warden, and more. A GroundXero report.

The Regional Institute of Education, Bhopal, is a constituent unit of NCERT, and is responsible for training teachers from five states and two union territories. Students primarily go there for BEd and related programmes. Yet, as adults and teachers in the making the women there hardly have any autonomy over their movements. According to one hosteller who spoke to GroundXero, a female student wanting to spend a night outside the hostel has to first get approval from the elected hostel representative, then from the hostel warden, and finally from the Chief Warden!

While protests earlier in the year won an extension of curfew timings for women from 6pm to 9pm, they have since been largely rolled back. When the power failed one night, even as the women were stuck indoors in the Bhopal heat, they wouldn’t be let out onto the terrace. Finally they were allowed out for the very generous time span of 15 minutes! Another hosteler said that there is one campus canteen, which only serves packaged food, and women locked inside hostels aren’t allowed to order food deliveries after 8pm. This discriminatory access to space permeates a woman’s time on campus – limiting her choice of food, or affecting her ability to take care of her health. While college lasts till 5:30pm, women can use the gym only from 5:30 to 6:30pm, and would have to rush from class to make any use of it. On the other hand, men can access the gym at various other times.

Women at RIE are calling out on this stifling space, and reclaiming the campus by protesting outside through the night. About 200 of them began by camping on the basketball field on the night of 10th April. On 11th April they protested at the gate, which was supposed to shut at 9pm, and stayed outside the hostel for a second night. While the protestors in Bhopal are currently unaffiliated to any organisation, in Delhi Pinjra Tod organised a protest in solidarity and occupied NCERT premises on the 10th. 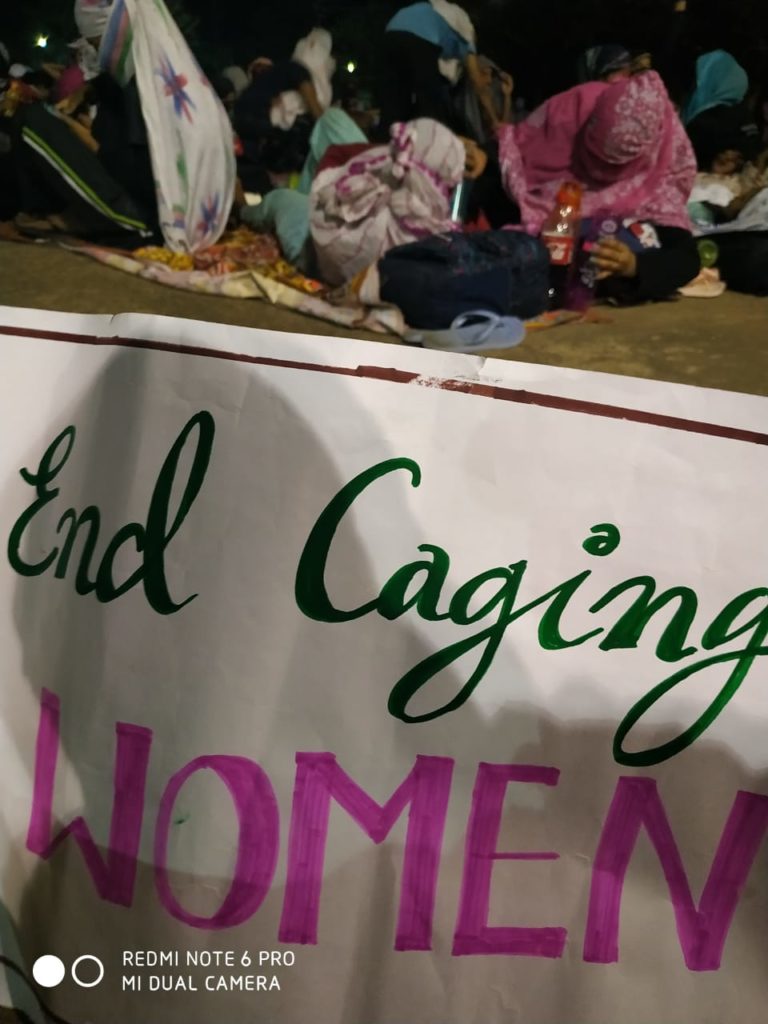 The latest spark in Bhopal was the attempted expulsion of a woman student on account of her depression. The authorities first claimed that she had submitted a false medical certificate because the stamp was missing, but even after she got a fresh certificate with the stamp (which the hospital had overlooked the first time) they were refusing to back down. The Principal allegedly told the student that she was at risk of committing suicide, and he did not want that to happen on campus! GX further learnt that while on the one hand the administration created all this fuss about needing a stamp on the medical certificate, their own eviction notice to her did not have one. This notice was handed to her in person, and she was asked to leave the hostel premises the next day itself. Her parents were not informed by the administration. This is the same administration that claims to care so much for their female students that they can’t let them spend a night out without their parents’ confirmation, and several rounds of subsequent administrative approvals. Moreover, they threatened to call the police on her, and prevent her entry into the mess for food. So much concern for a student suffering from depression? She, however, stuck her ground, and refused to vacate the room. Women students rallied around her, and the administration had to backtrack.

It was too little, too late. Students’ demands have extended to include access to clean water for bathing, access to the campus and library at all times and an extension of curfew timings, among others. They are also demanding to be allowed to keep personal vehicles on campus. Every year they have to do internships at schools for a few months, and to commute from the hill campus to schools requires expensive cab services if one can’t travel by, say, one’s scooter. They are further demanding that the college have a union, which can represent students’ demands to the administration. The authorities have installed CCTV cameras that face corridors inside the women’s hostels – the students are protesting being policed in such personal spaces indoors. One student questioned the need for a Chief Warden as well, and said that even if one is to be had, that person should be a woman, because women students are not comfortable approaching a man on different issues. Students are also calling for the resignation of the current Chief Warden, for his harassment and attempted eviction of a student. They also demand the administration write a letter of apology to her parents.

The student protests have already earned a few concessions, but most substantive demands remain unaddressed. Members of Pinjra Tod who occupied the NCERT office in Delhi were told that the Director is currently abroad, and they have been given an appointment for the 15th. They have been assured that the NCERT Director will speak with the authorities in Bhopal on 15th itself. In light of these assurances the women students of RIE Bhopal have called of the protests this morning, until Monday. 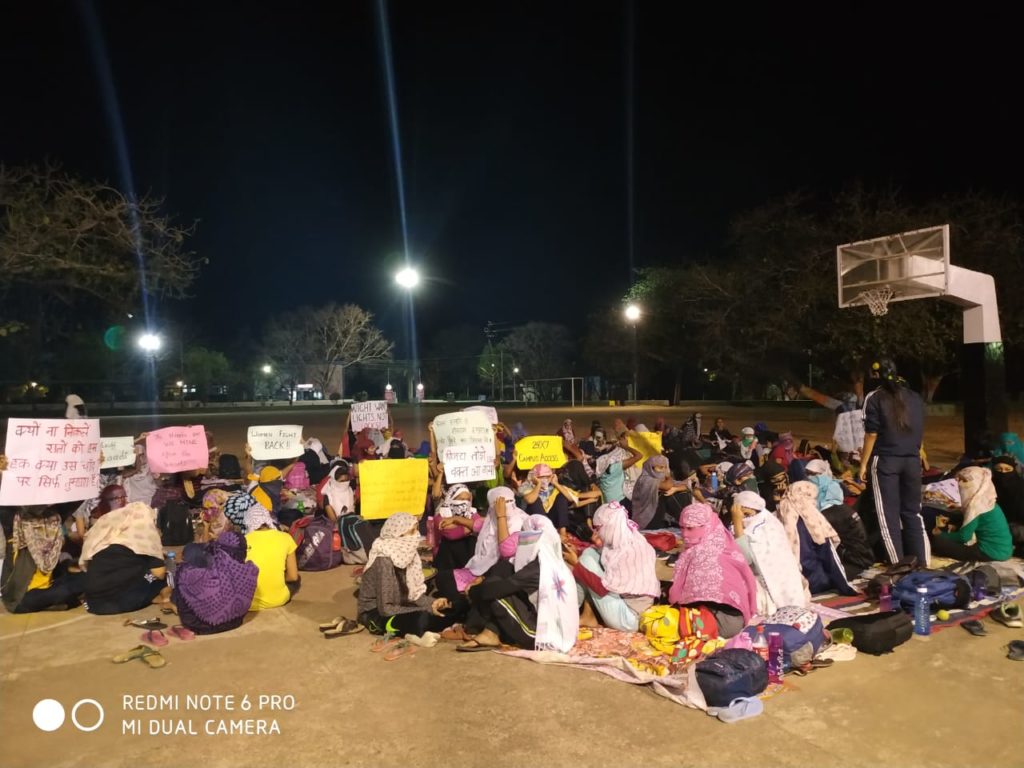 Meanwhile the panicked administration has started varying intimidation tactics. When the women called off the protest temporarily and were heading back into the hostel this morning, the guard instructed them to remove the dupattas covering their faces, which they had been wearing to protect their identities, fearing repercussions. They managed to push past and enter. The administration has texted parents of protesting students, calling them for an emergency meeting on the 15th, hoping to threaten the students into submission via their guardians. The police have paid the protestors a visit, and laughed at their demands, infantilising their desire for freedom of movement. Seema Soni, Deputy Commissioner of the Ministry of Tribal Affairs also dropped by, and remarked that their demands were unrealistic, as even she does not stay out after 9pm!

Unfortunately the protesters have not earned much solidarity from male students. None of them attended the protest at any point over two days, and many have been speaking against it. While some professors have been supportive, others – especially those in administrative posts – have been openly hostile. One guy counted a class missed for protests as four classes, and marked four absences in the attendance register for the women who did not attend one class. Another came and called them “kachra [garbage]” who have been dumped there by their parents, and who need to be cleaned up by the administration. GX also accessed an audio recording of allegedly the same person, in which one can hear a teacher berating the women students in class for staying for staying out at night and thereby appearing visibly tired in class, threatening them with different consequences if they continue. People have been making insinuations about the “character” of the women involved, saying things like: “Lipstick to utarti nahi inki, inhe bahar ghumna hay [She doesn’t remove her lipstick at any point, and wants to roam around outside]”. The administration also called off campus placement events that were scheduled for 10th April, citing the continuing protests – which had posed no interruption to them – in an attempt to draw away 4th year students from the protests. Further, they have allegedly tasked women students in year 4 with getting signed undertakings from all the women in hostels stating that they would not participate in further protests – and have been told that until such undertakings are received, placement activities would not resume on campus.

So much frenetic activity to prevent women from having equal access to campus! Yet, despite these huge pressures, the women of RIE Bhopal are not backing down.