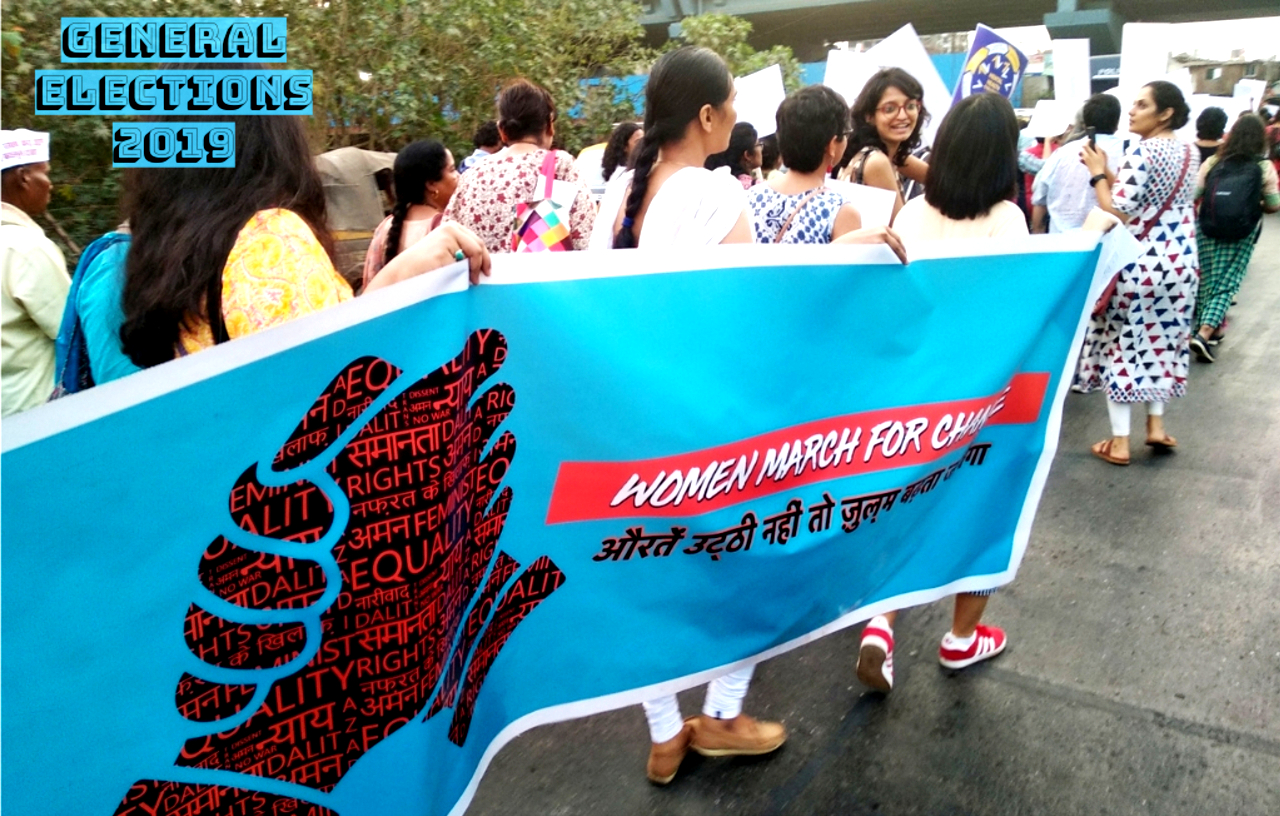 “Still We Rise”: Women Rally Across the Country Against Hate Politics

“It is time to take stock of everything we have lost, of opportunities that failed to arise, of the hatred that was delivered to our doorsteps like cow meat. It is time to count the lives we have lost and the ones we are at risk of losing. And, it is time to take charge, take control of the future that lies before us. What can we do differently?”, asked the leaflet brought out by the Mumbai rally. Though the answer is yet to be found, the question itself has been pushed into pre-election discourse by the tens of thousands of women who marched across the country on April 4th. A GroundXero report on the Women’s March for Change in Mumbai.

On April 4, thousands of women and members of the transgender communities marched in simultaneous rallies held in several cities and towns including Kolkata, Delhi, Mumbai, Amritsar, Gujarat, and UP against the current regime’s politics of hatred and violence. “Vote out those forces from power who have normalized hateful and divisive politics in recent times, and have specifically unleashed organised violence upon women and other marginalised genders,” was their rallying call. Though those marching did not have a clear response to several onlookers’ question “Then whom do we vote for?”, they clearly stated that defeating the Hindutva forces is the “zero-th” step in the arduous uphill battle for gender equality in this society. 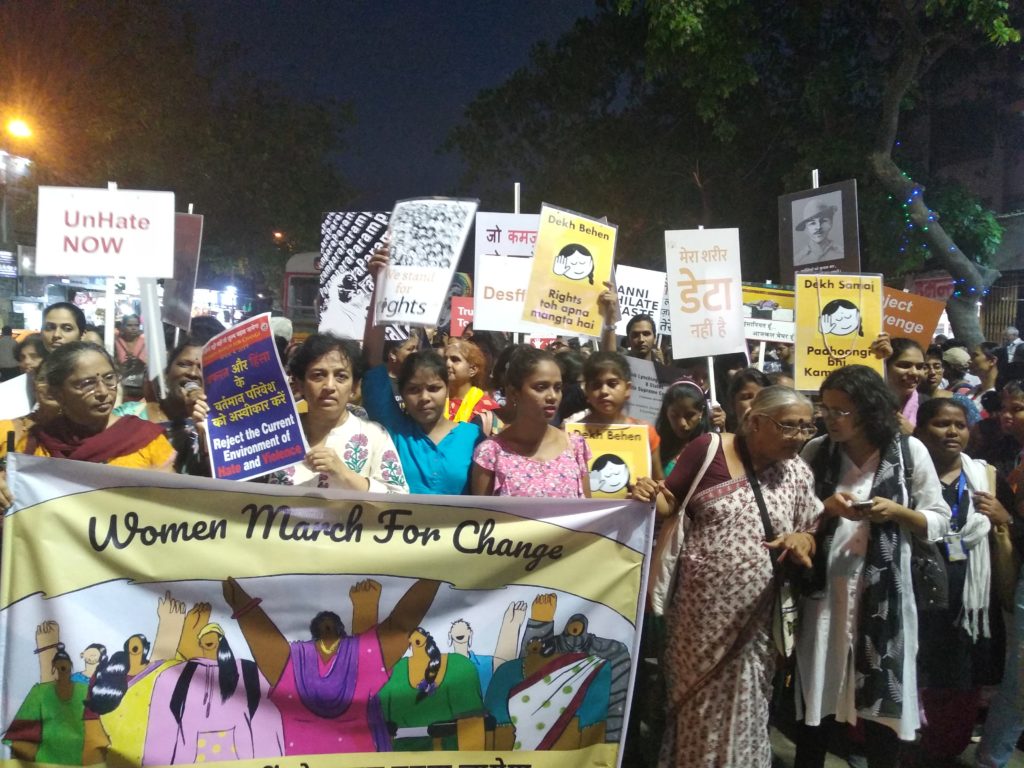 The march in Mumbai was organised by around 20 organisations, including Awaaz-e-Niswaan, the Bebaak Collective, Church in the City, Citizens for Justice and Peace, the Forum against Oppression of Women, the Indian Christian Women’s Movement, Jagnyacha Hakkache Andolan, Ghar Bachap Ghar Banao Andolan, LABIA (a queer feminist LBT collective), Majlis, the National Federation of Indian Women, the National Hawkers Federation, PUCL Maharashtra, Satyashodhak Research Centre, the Adivasi Students Forum, the North-East Students’ Forum, the Tribal Women’s Collective, the Queer Collective, and AIDWA. The rally began from the Annabhau Sathe Udyan and proceeded all the way to Kurla station, and was attended by at least 500 people.

“In recent years, especially since the Modi Government was elected, women’s bodies and minds have suffered extreme violence; be it Fatima Nafees, … or Radhika Vemula …; be it Rakbar’s family, who lost him to Hindutva hatred, or Junaid’s mother Saira Banu who still awaits justice; be it families of the protestors killed in Niyamgiri, or Adivasi women, who routinely face threats of eviction; be it women silenced by draconian laws like the UAPA, or impacted by police brutality, or unequal wages,” read the leaflet titled ‘Still We Rise’ released by the organisers. 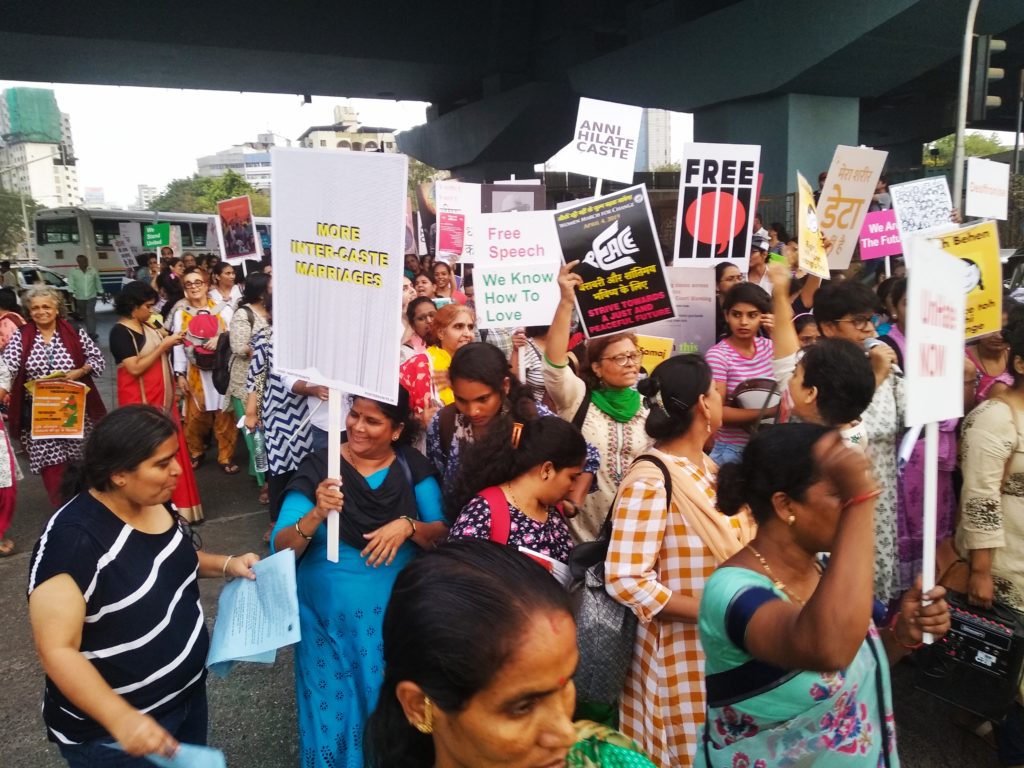 Mumbai specifically has seen a multitude of attacks on public spaces and services in the recent years, and women have been direct victims in all of these situations. The city’s iconic BEST buses make it possible for thousands of working-class women and students to reach their place of work or study, all the while remaining affordable and safe. The Maharashtra government has decided to spend over Rs. 15,000 crores on a coastal road exclusive for private and rented cars, even as the public bus transportation system of the city is being systematically dismantled and privatised. Citizens including large number of women, children and the elderly are being forced to live in toxic conditions such as in Mahul. In the state of Maharashtra, the threat of devastating droughts looms large again as the agrarian crisis continues to worsen and the number of farmers’ suicides rise.

The protestors pointed to how each of these developments has impacted the lives of women and those belonging to other marginalised genders. One woman marcher from the National Hawkers Federation spoke to GX in detail about the regular harassment of hawkers, specifically women hawkers. Their stalls have been repeatedly destroyed by patrolling units of the Maharashtra police. Several women hawkers including elderly persons were physically assaulted and thrown into prison for more than a month last year on the charge of ‘illegal hawking,’ though the hawkers claim they had the required court order and other government permissions for running their small businesses. “They don’t have anything against the ‘Bikaner waalas’ [large chains selling sweets and snacks] and the big shiny shopping malls, but they are after small people like us who are selling vada pav on the street,” said one of the women. They narrated harrowing experiences of being manhandled by the police, and of receiving rape threats from male police officers. “Aur kissiko bhi vote karenge, but Modi ko bhagana hai [We’d vote for anyone, as long as it ensures that Modi is voted out of power],” they said almost in unison. 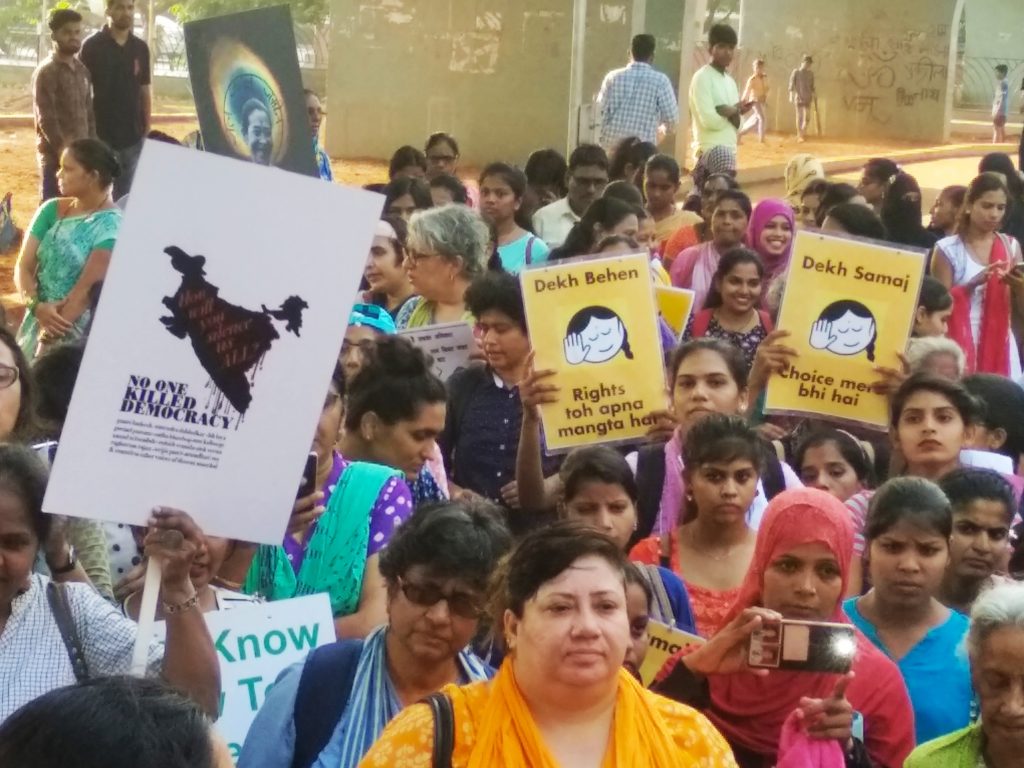 GX asked several participants whether such a rally gives the general impression that other parties are somehow better when it comes to the question of patriarchy. “All political parties in this country are patriarchal and the BJP is hardly alone in this. We understand that Indian Elections are a men’s game after all. But from what we have seen over the past 5 years, if these people continue to be in power, we won’t even be left with any space to fight the larger battle of gender equality where we get to hold every other party to the same standards,” said Sujata Gothoskar from the Forum Against Oppression of Women. 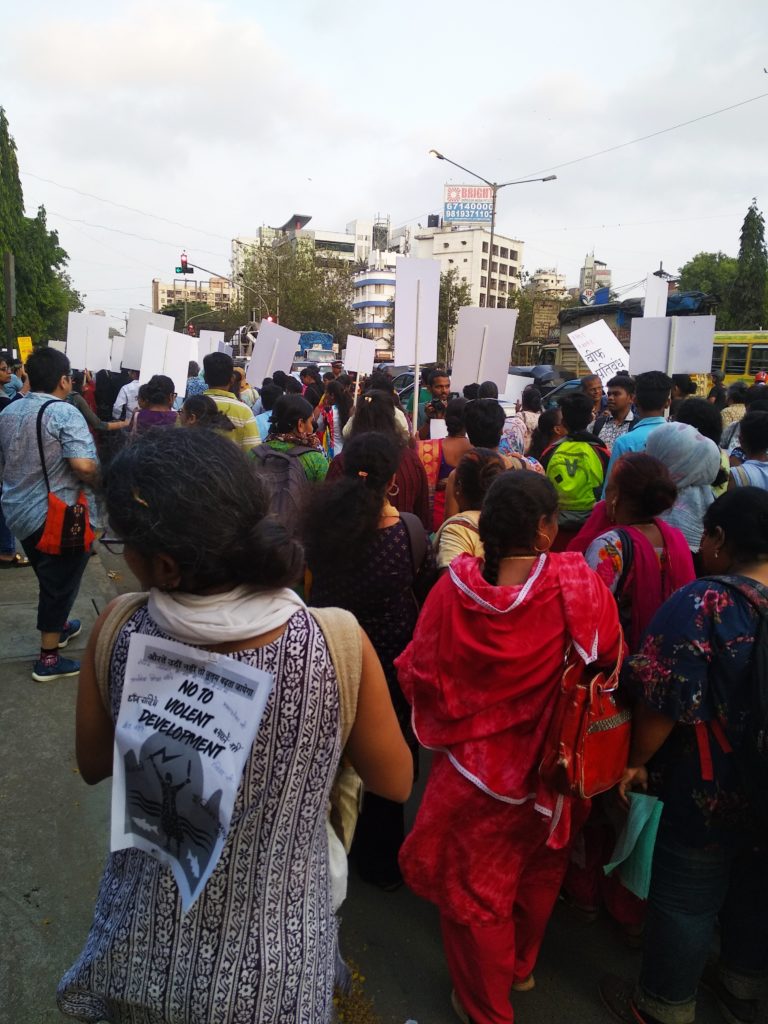 Figures from across political colours paint a bleak picture. In spite of growing demands from feminist movements in the country asking for greater representation of women candidates in the upcoming elections, hardly any political party has cared to listen. As of April 1, out of the 966 candidates declared by the major parties, only 131 are women (13.5%). While the proportion of women candidates fielded by the BJP and Congress are a meagre 11.5% and 14% respectively, the TDP has exactly zero women candidates. Each of AAP, TRS, JDU, BSP, NCP, AIADMK, and Shiv Sena have put up exactly one woman candidate, and in many cases these candidates are relatives of big established leaders—for instance Supriya Sule of NCP, who is Sharad Pawar’s daughter. The DMK, who supported the 33% women reservation bill in the Parliament, have put up only 2 woman candidates (only 10%) out of a total of 20 fielded candidates. Even the so-called progressive CPI(M), whose women’s front AIDWA was one of the organisers of the rally yesterday, have only 15% women candidates in the upcoming elections. The only exceptions in this regard perhaps are the TMC (40% women candidates) and the BJD (33% women candidates).

While mainstream political parties are largely ignoring social demands, social movements seem to have been pressed into fielding their own candidates. Two transgender persons are fighting the elections this time from Mumbai, on Durbal Ghatak Aghadi tickets. Jatin Mummy, from the Jogati Kinnar Samaj, is contesting from Mumbai North East, and Sneha Kale, from the Kinnar Samaj, is contesting from Mumbai North Central. “If I get elected, I will talk on these issues to create awareness among the public. I will also work to implement the NALSA judgment for the welfare of the Kinnar community,” said Jatin to the Asian Age. The AAP has also fielded one transgender person – Bhavani Maa – the North India in-charge of the Kinnar Akhada, from Allahabad seat. 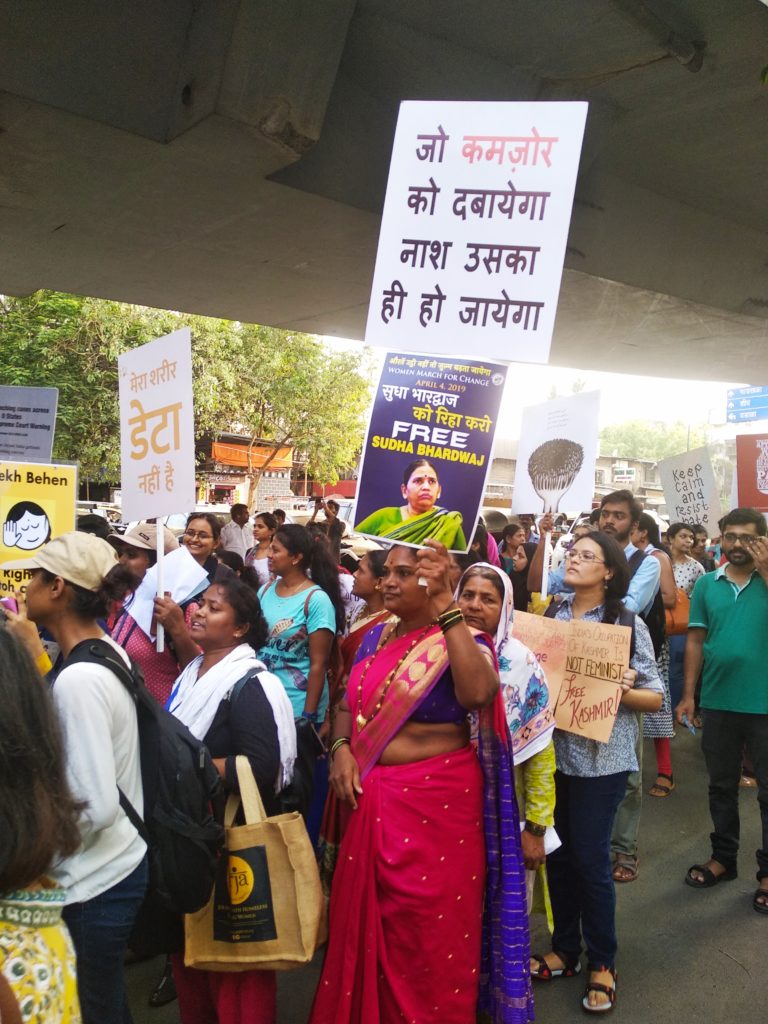 The Mumbai march drew a wide range of activists from across the city. Members of the group Aamchi Mumbai Aamchi BEST (AMAB) talked to GX about the impact of privatization of public transport, specifically on the lives of daily wage earning working women. “Their lives and livelihoods depend crucially on having access to a public transport network. How are these women and their families going to survive if the city winds up BEST?” asked one of them. During the historic 9-day-long strike, families of the bus operators employed in the BMC-run Brihanmumbai Electric Supply and Transport, were attacked by mobs allegedly sent by the BMC. “The women from these families put up barricades and resisted those attacks,” reminded Sandhya, from AMAB. The question of unemployment and attacks on women’s livelihood underscored the march. Many people spoke ofhow demonetization robbed the tiny cash reserves that working class women maintained in the household for personal and family emergencies. According to the leaflet distributed during the rally, 88 lakh women have lost their jobs in these 5 years. 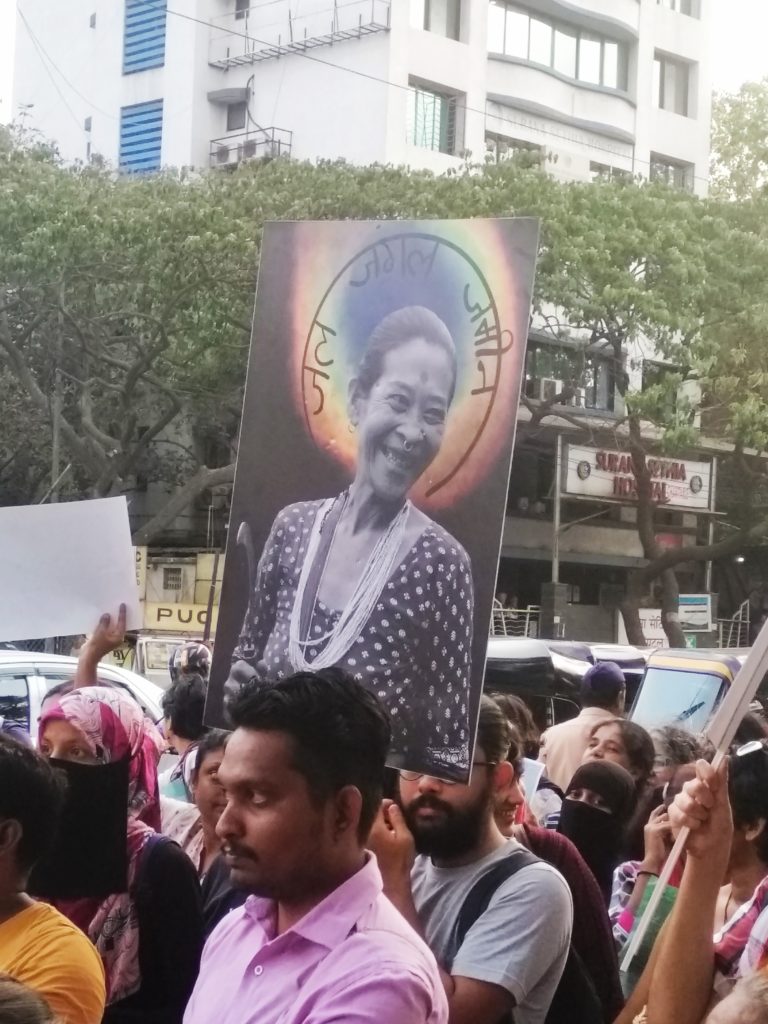 Several protesters held out posters demanding the release of Adv. Sudha Bharadwaj and other political prisoners who have been falsely accused and imprisoned by the Maharashtra Government following the Bhima Koregaon agitation. Questions were raised about the dismantling of institutions meant for justice, from the courts to the Women’s Commission. Advocate Lara Jesani from PUCL Maharashtra pointed out that India’s “A” accreditation was suspended for a year in 2017 by the Global Alliance for National Human Rights Institutions (GANHRI) on evaluation, and the country could have lost its seat in the United Nations Human Rights Council (UNHRC). The National Human Rights Commision was found lacking in the GANHRI review of November 2016 and it’s accreditation was deferred for a year on the basis of “fundamental problems in its very organisational set-up, including appointing high-ranking government servants in core positions, non-representativeness of its character, political influence and opaque and non-participatory selection procedure.” It also condemned the commission for a tremendous backlog of about 40,000 cases. After a lot of lobbying and negotiations, mainly through promising to make changes in the future, India managed to get back the accreditation in March 2018. This was under-reported in the media. Several protestors spoke to GX about the National Commission for Women and its state branches and how under the current regime these bodies have been structurally defunded, and emptied out through systematic under-staffing. 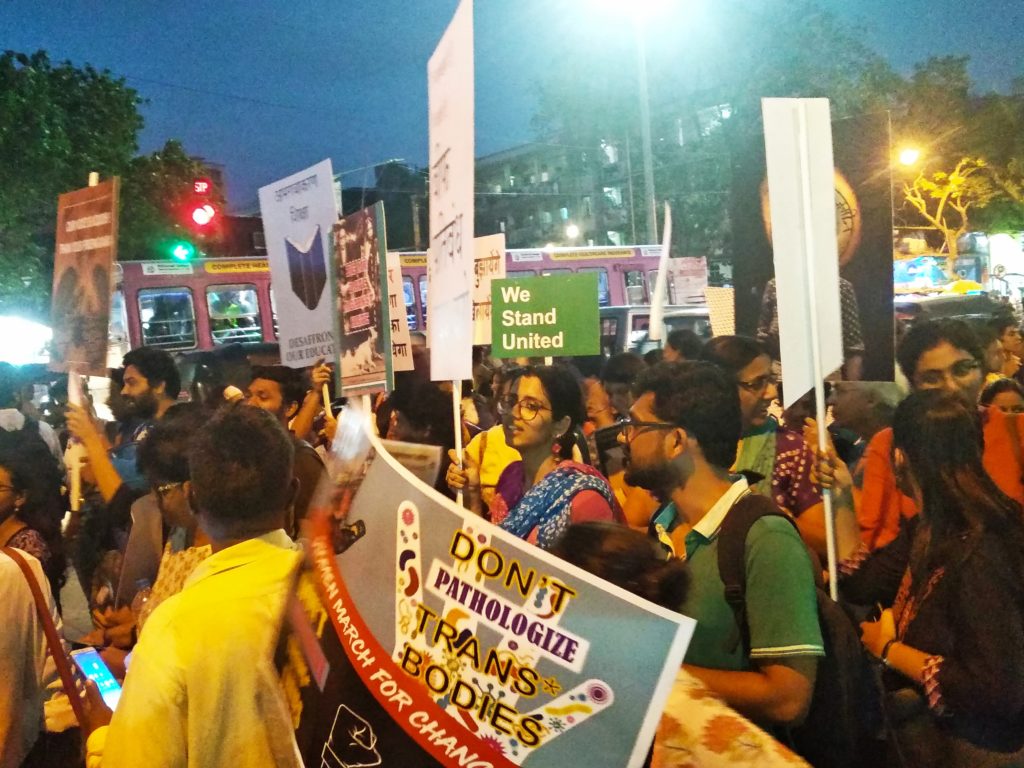 Several transgender community members, mainly students, also took part in the march. One of them spoke to GX about how the current regime has led organised attacks on the trans community—both through physical violence in the form of lynching hijras, and through legislations such as the notorious Trans Bill, Surrogacy Bill, etc. “We know that the entire society and therefore every other political party is also transphobic, but the way BJP-RSS has galvanized attacks against us is unprecedented in history. While tabling the Trans Bill, they tried a lot to co-opt our community leaders and gharanas into supporting the bill. They can go to any levels of deviousness when it comes to pushing their anti-people agenda,” said one person.

“It is time to take stock of everything we have lost, of opportunities that failed to arise, of the hatred that was delivered to our doorsteps like cow meat. It is time to count the lives we have lost and the ones we are at risk of losing. And, it is time to take charge, take control of the future that lies before us. What can we do differently?”, asked the ‘Still We Rise’ leaflet. The same question rang in the voices of people in the march. The answer however is yet to be found. 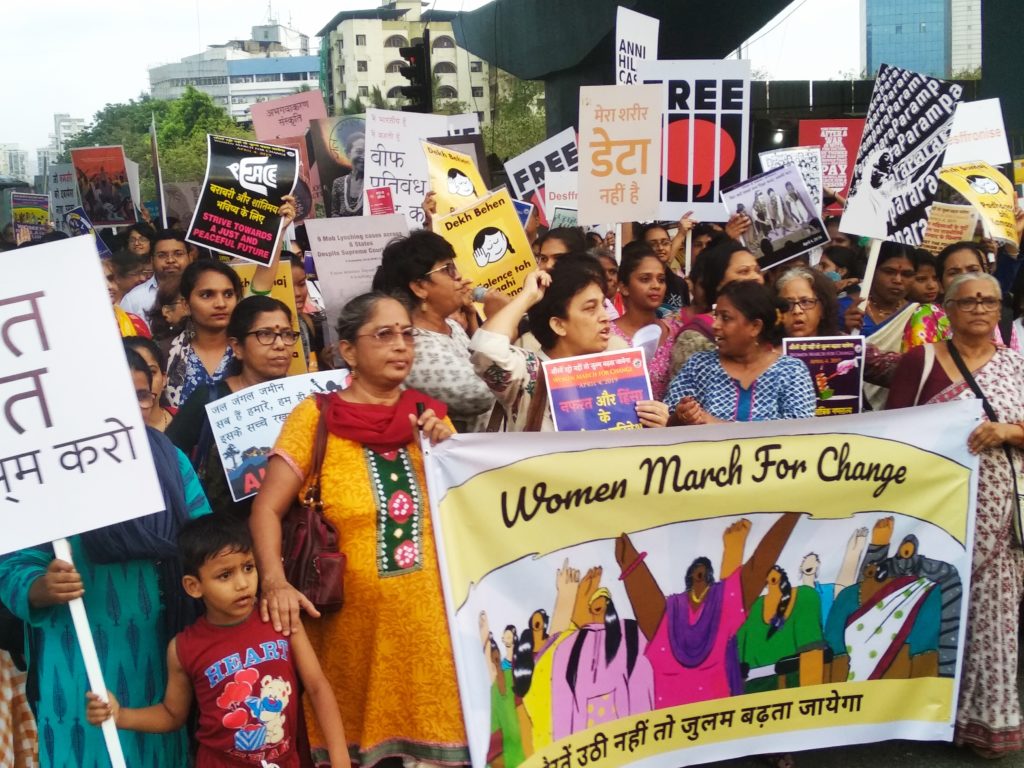