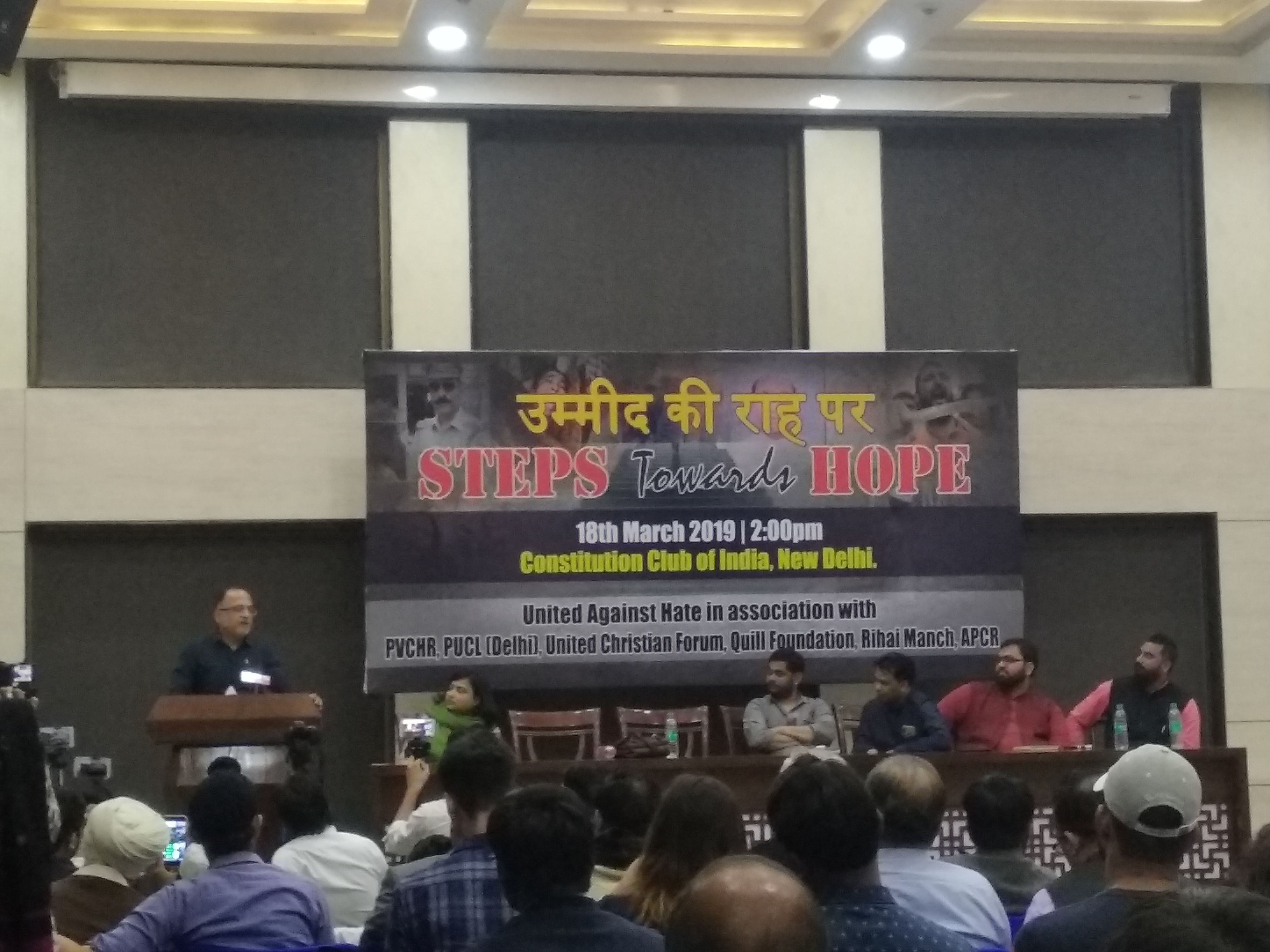 On Monday, several civil and human rights organizations came together to organize a day long convention in Delhi’s Constitution Club. The programme titled ‘Steps Towards Hope’ was aimed to take stock of the last four and a half years of the Narendra Modi led Government and the need to strengthen constitutionally mandated citizens’ rights. It was organized by United Against Hate along with PVCHR, PUCL(Delhi), United Christian Forum, Quill Foundation, Rihai Manch and APCR. The speakers for the programme included activists, journalists and lawyers, who had brought into public attention the instances where the current regime has subverted the legal mandates. A GroundXero report.

Taking stock of organised hate crimes and the underlying politics

Speakers at the meeting pointed out instances where the current regime had either taken an active part in perpetuating lawlessness — like the scores of extra-legal killings in UP—or, had been complicit by ensuring that the perpetrators of violence against minorities roam free. Babu Bajrangi would be an excellent example of the latter.

Rajeev Yadav of Rihai Manch, an organization that has been working extensively on hate crimes and failure of law and order in UP, pointed out the ways in which violence is being deliberately inflicted to reap political dividends. Needless to say, most of the victims of such violence are from the marginalised communities. Most of the victims of the alleged encounters are also from lower castes, Yadav pointed out.

Based on data collected by the organization, Fawaz Shaheen of Quill Foundation provided an estimate of 759 hate crimes committed during the current regime. He stressed that crimes of this proportion should be considered as a national crisis that is being perpetuated in a very organized manner. He also spoke about the necessity to recognize that religious hatred is indeed a prominent foundation and constituent of such violence. Several speakers raised demands for anti-hate crime legislation.

Niranjan Takle, the journalist who has extensively reported on the suspicious manner in which Judge Loya died, spoke about the rewriting of history that is being done to make heroes out of people who had capitulated to the British colonialists. These are symptoms of fascism that would engulf anyone and everyone who would come on its way, he maintained. He also spoke of his recent investigations into the economy of cattle trade in the Haryana-Rajasthan belt, infamous for lynchings (Pehlu Khan, Rakbar, and many others). He provided details about the organised extortion of money that is going on at ‘check posts’ on the highways, jointly operated by the police and go-rakshak vigilante groups.

“They are charging Rs 5000 per buffalo and Rs 6000 per cow. A typical checkpost earns from 1 to 1.5 crore rupees per day through such activities,” he said. He also spoke extensively about the complicity of the judiciary, including the highest court, in normalising these new lows in our politics and society, as was seen with the charges on BJP Chief Amit Shah specifically in the case of murders of Sohrabuddin, Kausar Bi and the alleged murder of Judge Loya, who was running the trial that could have linked the murders to Shah.

Mehtab Alam, member of a fact finding team that had visited Sitamarhi in Bihar after the custodial death of two muslim youths, spoke about the conspicuous nature in which Gufran and Tasleem died earlier this month. Post mortem reports revealed that the two young men were killed by driving nails into their bodies, inside the police station. After widespread protests by the families and other local residents and community organisers, the Bihar government suspended the ‘entire police station’ and announced compensation for the victims’ families, but no action yet has been taken.

But it would be wrong to describe the last few years merely as a time of increasing assaults, the speakers reminded. This is the time which has also witnessed an increasing amount of popular movements against such attacks. The activists present at the meeting spoke about the struggles they have been part of, and emphasized the need to forge larger unity.

Hannan Mollah, General Secratery of AIKS, under whose leadership many milestone Kisan marches have been organised in various parts of the country, said, forging solidarities between a larger unity of all the marginalised people to defeat the fascist powers, is the need of the hour. He gave importance to the need of mass movements and pointed out, how because of the kisan marches, the plight of farmers has become a central election issue.

This opinion was reiterated by Soni Sori, an Adivasi rights activist from Chhattisgarh, working to save Adivasi lands and livelihood. Soni was arrested by the Raman Singh Government on charges of being linked to Maoists, and was brutally tortured in custody. Ever since getting out of jail she has been relentlessly documenting incidents of fake encounters and brutal violence by security forces in Bastar – specifically the attacks on adivasi women. “Nothing much has changed in Bastar, even after the new Congress Government in the state,” she said, while narrating the most recent “encounter” that happened in February, where 10 adivasi villagers including women, were mowed down by bullets, by the security forces.

The bodies of the victims have been mutilated, their breasts have been chopped off and the private parts are missing. The Government claimed, as expected, that those killed were Maoists. But Soni’s fact finding has revealed, that they were not. She also narrated a new disturbing phase of Hindu right wing hate politics in Bastar, when recently a Hindu mob had gathered around a mosque in Dantewada town, ready to break it open and desecrate it. A section of the ‘Hindu mob’ were the adivasi youth. “They are now using our adivasi people, who don’t philosophically believe in communalism, for their own anti-Muslim agenda. Bastar has been anyway burning for decades now, and this new trend is only going to make the situation far more worse if we don’t put a stop to this,” Soni told GX.

Activists also spoke about several successful movements in the recent times. For instance, the pushback on the issue of 13 point roster in University appointments has emerged to be one of the key moments in recent history. Sanjay Hegde, advocate of Supreme Court, focused on the legal battles for securing justice in cases of lynching and hate crimes and the need to demand new laws which would curtail and prevent such instances. He accused the judiciary of a “balancing act,” through progressive judgments on certain kinds of issues, while continuing to strengthen the hands of the violators in other situations, especially when it comes to attacks on Muslims and Dalits.

Lenin Raghuvanshi – a social activist who has worked extensively on the issues of bonded labour and manual scavenging – spoke of recent deaths of manual scavengers in the Prime Minister’s own constituency at Varanasi. He spoke of the Ganga Action Plan and the big money investment into the project and how the project has in fact led to the destruction of many small old Hindu temples, while the same Government keeps claiming itself to be for Hindus and their temples. Lenin also mentioned the convergence of Brahmanism and crony capitalism – the inseparability of the janeu (sacred thread) and capital – as can be seen in the issue of waste management. While manual scavenging endures within the nation and continues to claim dalit lives and dignity everyday, we have savarna owned multinational corporations mining out big profits from waste management projects.

A major part of the deliberations in the programme was about the perpetuation of hate and bigotry that has engulfed our civic life, its institutionalised nature and the need to counter them in a systemic manner. Manifesto Against Hate, a charter of demands and agenda against such systemic hate prepared by the group United Against Hate, was discussed in this context.

Representatives of various opposition political parties addressed the last session of the meeting, on the topic of current regime’s hate politics and discussed strategies that can counter such a phenomenon. When asked about his party’s concrete plans for countering hate politics, Sachin Rao of the Indian National Congress said, “In the land of Gandhi, any revolutionary movement has to be fought through non-violence and every social and political change has to be based on constitutional morality“.

Ali Khan, spokesperson of the Samajwadi Party, stressed the need to address all the issues concerning the masses of this country. Yogendra Yadav stressed the need to reclaim religion and “the composite culture of India“ by progressive and secular forces“, and not letting fundamentalist forces hijack such questions. This was supported by Kavita Krishnan of the CPI(ML) who also said that laws like those for protecting cows or banking conversions should have no place in the statute books of the country. She said, such laws are often used as pretexts for hate and violence. She also reminded the audience, that it was not the BJP, but the Congress which had historically enacted and implemented such laws within the nation. Aam Aadmi Party representative Dileep Pandey commented, that BJP, which claims to be a party of Hindus is working to further its own interests and has nothing to do with the welfare of the Hindus themselves. He listed out Hindu families that have been targeted by the BJP backed forces across the country.

Prof. Ratan Lal of Delhi University had earlier in the meeting summarised the current political situation in the country as one in which the mass social and political movements’ articulations and analysis of the day have gone beyond the control and even comprehension of the mainstream political parties, including those in the Opposition. “This is a good sign that political parties can no longer set the agenda for mass politics, and have to constantly catch up,” he said. “But that also means this fight is not just about an election or one particular party or organisation, but much deeper than that. That is, this fight has to go on for sometime to come, no matter what happens next month when the country goes to the polling booths,” he was quick to add. He mentioned the examples of the successful National Strike last year on the issue of subversion of the SC/ST Prevention of Atrocities Act, and the more recent successful mobilization on the question of 13 point roster. “The state still doesn’t understand how these large mobilizations were organised this successfully, and who exactly organised it. They can’t put their finger on any specific organisation or party, and they are still confused,” he said.