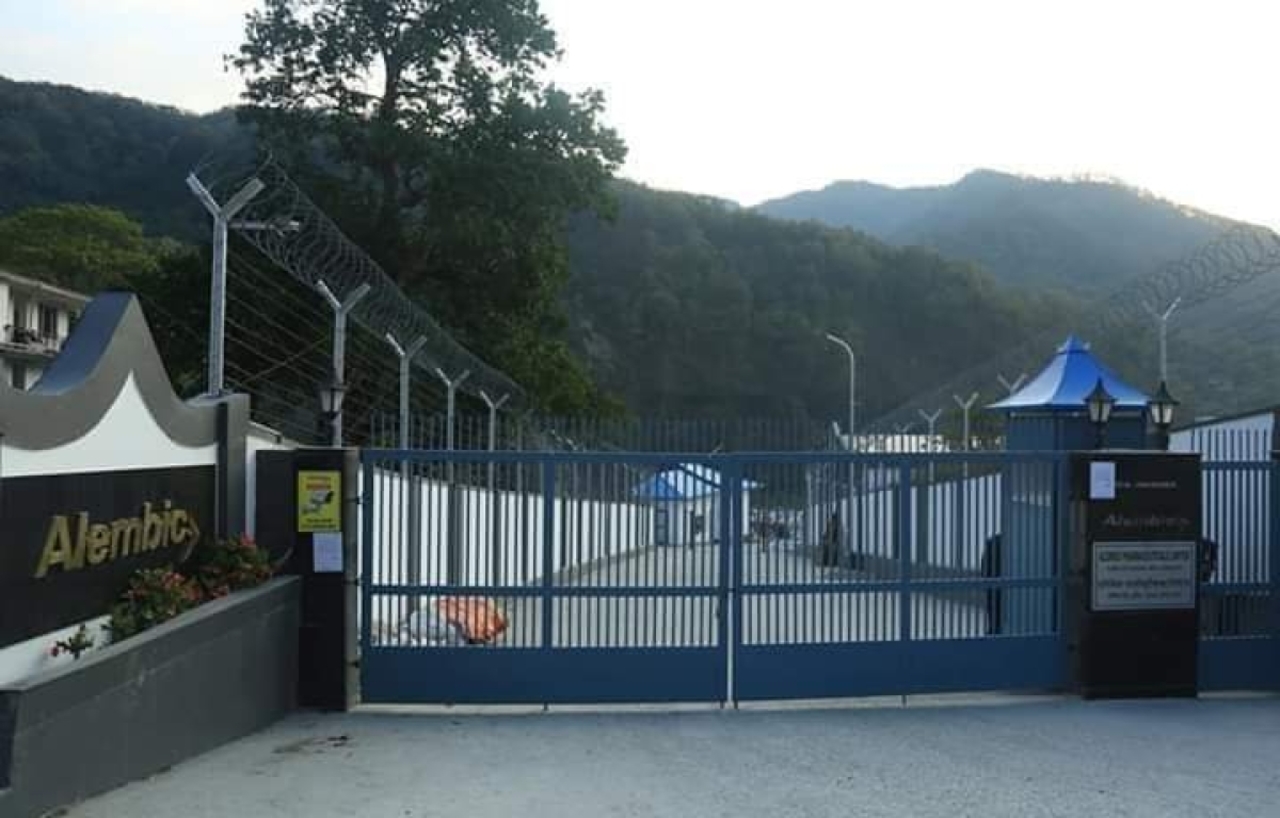 Contractual workers of the pharmaceutical company’s manufacturing unit located in Samardung, South Sikkim have been protesting the sacking of 15 of their colleagues since 1st Feb. Though the dharna was called off on Monday, the movement has left the pharma company and ruling party’s anti-labour policies exposed. A Groundxero report in consultation with Knock Sikkim.

Vadodara based Alembic Pharmaceuticals company announced on 6th March the closure of operations at its manufacturing facility located in Samardung in South Sikkim until further ‘advice.’ The notice came 34 days after contract workers took to the streets to protest the sacking of 15 of their colleagues due to a brawl that broke out between the contract workers and the company management. The termination of workers was in blatant violation of labour laws, yet the issue remains unresolved despite workers holding several talks with State Labour Department and State Industries and Commerce Department.

The incident took place on February 1 when a 25 year old woman contract worker was sacked for ‘sleeping during work hours’. In her defence, the woman employee said, “We regularly check in for work at 9 am. It was merely 15 minutes into the work schedule when one of the employers accused me of sleeping and told me not to come for work from the next day. Such incidents have happened in the past too.” Later, 15 workers who came in support of their colleague were also sacked following a brawl. The movement began with 20 workers protesting on a cold winter night. The striking workers showed uncompromising resilience in the face of attacks by the company’s goons. The police refused to act on the workers’ behalf, refusing to even register an FIR against attacks on striking employees, but did register an FIR on behalf of the company.

On March 1, an investigating officer from Namchi District Court approached the protesting workers with a notice asking them to appear in the district court. The workers refused to accept the notice and carried on with their protests. They marched to Gangtok from Singtam town, a distance of 30 km, to knock on the doors of industries and labour departments, donning funeral clothing with shaved heads, calling it the ‘death of democracy and state administration’ — all in an attempt to protect their livelihood. 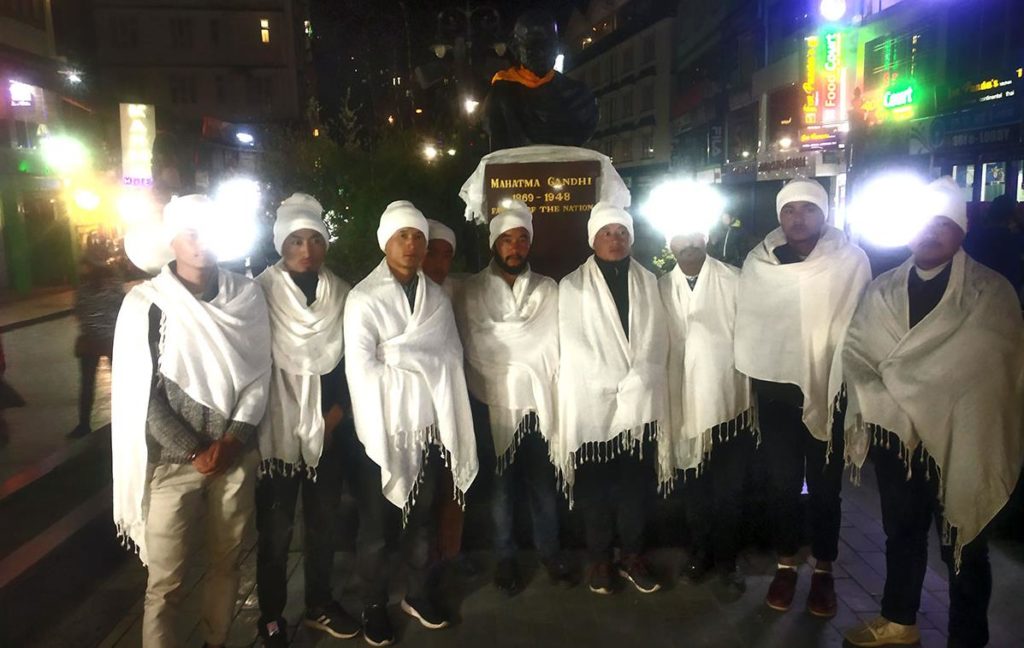 State Labour Minister DD Bhutia has still not addressed the issue. The Industries Minister Ugen T Gyatso Bhutia stated reluctantly, “If such instances continue then all companies will leave Sikkim.”

According to official estimates, pharma companies, hydroelectric power plants and other industries contribute to around 36% of the state’s revenue. Thirty-eight pharmaceutical production units are currently operational in Sikkim. At least 50–60 small, mid-sized and big pharmaceutical companies from Gujarat including Alembic Pharma and Torrent Pharma moved to Himachal Pradesh, Uttarakhand, and Sikkim to avail tax incentives after the Vajpayee government introduced location-based tax exemption in 2003, for a period of 10 years, to promote industry in the hilly states. The UPA government extended the exemptions in 2007 through the North East Industrial and Investment Promotion Policy (NEIIPP) for north-eastern states including Sikkim, and Special Category States packages for Jammu and Kashmir, Uttarakhand and Himachal Pradesh to promote industrialisation, valid till 2017. Recently, after the introduction of GST (which did not have any provision for tax exemptions), the Modi government has given approval to the scheme of providing budgetary support under the GST regime for eligible industrial units in Jammu and Kashmir, Uttarakhand, Himachal Pradesh and north-eastern states including Sikkim, till 2027.

The workers are leading an utterly undignified, robot-like life inside the dingy confines of these factories in an atmosphere full of toxic chemicals. The company has not taken even the minimum of safety measures. The opposition, Sikkim Krantikari Morcha (SKM) alleged that pharmaceuticals companies which manufacture life-saving drugs and medicines in the state of Sikkim are exploiting the innocent workers at an extremely low wage, under lack of facilities and provisions.

Gross violation of human rights reportedly take place in these factories, and workers are reportedly treated like slaves. “Ruling Sikkim Democratic Front (SDF) is not in favor of their own people and children, it is totally hands in gloves with private companies,” said BJP Youth Wing leader Laten Sherpa.

The Labour Department list of laws applicable in Sikkim stands out for striking absence of the Trade Union Act, 1926. Although unions are not banned, they are highly regulated through procedural complexities. Moreover, during the merger with India under Article 19(1)(c) which grants freedom of association, Sikkim was also granted a special provision in the Constitution under Article 371F (k) that says “all laws in force immediately before the appointed day in the territories comprised in the State of Sikkim or any part thereof shall continue to be in force therein until amended or repealed by a competent legislature or other competent authority.” Thus, many archaic laws that maintained a semi-feudal order still remain in effect in modern day Sikkim.

On 6th March, the movement was taken to a different level when contractual workers from various other companies functioning in the state, such as Ashwariya and Mankind, along with NHPC Teesta V power plant and Yuksom Breweries Limited, joined the protests at Shram Bhawan in Tadong to raise their respective issues. 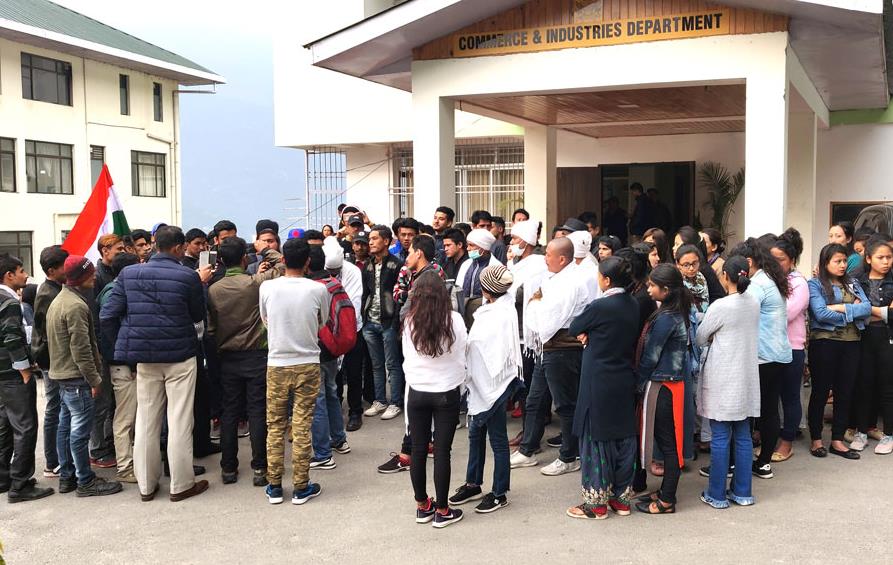 Some of the demands put forward by the workers were unequivocal — hike in salaries, better treatment and facilities for workers such as house rent allowances, employee’s insurance and women’s washrooms. The workers accused their respective companies of denying such basic rights.

On February 13, the Labour Secretary issued a notice to Alembic Pharma directing the company to act upon the demands of the workers, including the reinstating of sacked workers and dropping of charges. The deadline of February 18 was set for the company, for compliance of the order.

The company is said to have written to the state government and held talks with representatives of the SKM, stating it could not fulfill the demands placed by the workers nor reinstate them.

On 4th March, protesting workers marched to the Industries Department demanding the cancellation of Alembic Pharma’s licence. They issued an ultimatum to the state to act on the issue by Wednesday 2 pm. The company had already shut its operations before the deadline to the ultimatum expired.

Meanwhile, the ruling Sikkim Democratic Front announced that the company was shutdown due to the protests, and accused opposition parties of the same. The opposition SKM has maintained that the company suspended its operations at the behest of the state government, to break the unity of striking workers.

SKM Labour wing vice president Gyanden Lachungpa said, “As per the MoU, companies cannot open or shut down their units without the sanction of the government. Having availed itself of all the benefits of subsidies and profits, the company has shut down its unit without notifying the local authority.”

On Monday, after meeting with the Labour Department, the protesting workers stated that no decision had been arrived at that was in favour of the workers. They however also called off the dharna, while stating that the movement will continue.

The announcement of closure of the plant came at a stage when the movement was high on spirit and continued to gain support from individuals, political parties, workers from other companies and other organisations. Closing down of the company till further “advice” is being seen as a strategic move of the company and the SDF government to subdue the issue before the general elections.