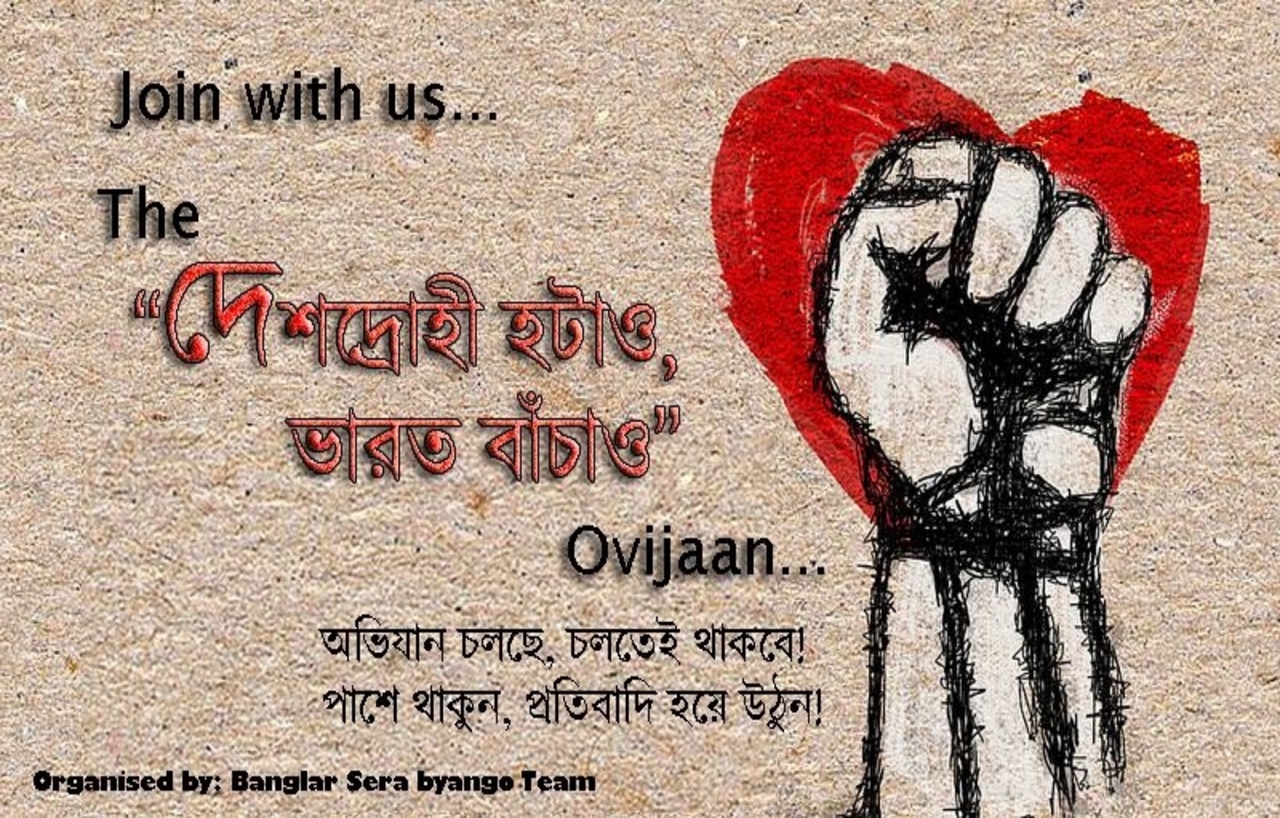 Gujarat BJP leader and party spokesperson Bharat Pandya exhorted party workers to turn the “nationalistic wave in the country”, in the wake of Pulwama attack that left about 40 CRPF men dead, into “votes”. True to his words the saffron warriors on social media and Sanghi cadres on the ground launched a coordinated, well planned campaign by physically attacking, assaulting, threatening and publicly shaming any dissenting voice or opinion challenging the Government narrative. GroundXero looks into the hate campaign orchestrated by the hindutva forces in West Bengal in wake of the Pulwama incident.

Following the death of 40 CRPF men in Pulwama, Kashmir, alongside the war-mongering chest thumping newsrooms, the BJP IT cell came back into full-time business. A flurry of doctored videos, photoshopped images and fake content meant to act as kerosene to the mass anger flooded the internet over the past few days. Not just the BJP, fake news was generated by other parties as well, but the BJP IT cell literally took to a war path. Many Indian citizens have been threatened for their ‘anti-national’ social media posts, many even lost from their jobs. Many Kashmiri students living in different parts of India faced physical attack and mortal threats. “While soldiers protect us from external enemies, it is our duty to get rid of the internal enemies” – the popular campaign-time logic made a comeback.

On 17th February, the home of a young woman in Birati (North 24 Parganas) was attacked. One of the attackers Prasanto Das even spoke to EenaduIndia in front of her ransacked house, saying he came because he was told that she had shared an ‘objectionable post’ against the CRPF jawans. The locals attacked her house and she was abused on Facebook. A person called Niloy was arrested by the police for supporting her. Prasanto said that justice was served and that he condemns sharing of such posts. The woman’s images were circulated on different pages, branding her with the cure-all tag of “anti-national,” and other patriarchal expletives.

In Khagrabari, Cooch Behar, a mob broke into young Anik Das’s house as he wrote a message in a “personal group”: “I am not from Pakistan; I may stay in India but eat on father’s income.” Anik’s father had in fact served in the BSF. Anik was taken out of his house, brought to the Khagrabari Chowpati and was asked to put the national flag on his chest, while the bloodthirsty crowd of nearly 30 men were shouting slogans, “Bharat Mata ki Jai” and “Indian Army Zinadabad.” Anik was also forced to do sit-ups holding his ear and raise the same slogans. He tried to explain that he never said anything against the country; he just said he was not a part of this frenzy. The crowd was in no mood to listen to any explanation. The whole incident was made live on Facebook by Sarbajit Saha. And in no time, comments started pouring in praising the work of the group, egging them to physically thrash Anik. As of 20th February there were 16,576 shares of the post and 848K views.

Previously Sarbajit and his group also went to a house in Bidhanpalli in South Khagrabari. The live video of the attack posted by Sarbajit shows that the attack was based on a Facebook post highlighting the rapes and killings of Kashmiris by Indian armed forces. The person who posted the content was at that time in Jadavpur, Kolkata. The abusive mob asked the father to call his son. The father was asked to put the call on loudspeaker and the son was threatened to chant “Bharat Mata ki Jay”. If he didn’t comply, they would ransack his home. The crowd also threatened the father, saying that if his son comes back to Cooch Behar, he won’t be spared. The comments on both the posts are full of abuses and criminal threats. Presently the video has been removed, the reason is unknown. Many of the profiles and groups have removed such videos subsequently – some on their own and few due to violations of “Facebook community standards”. 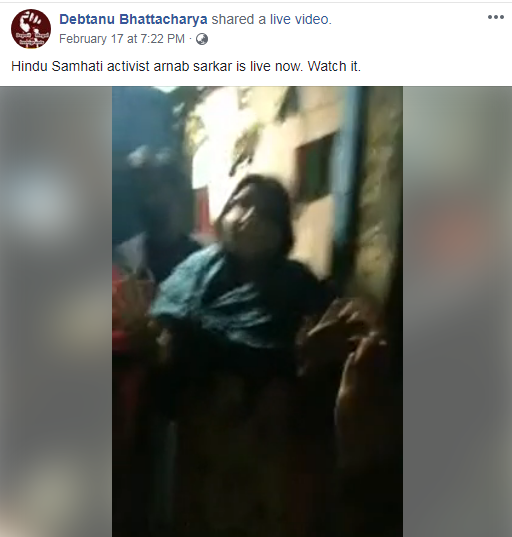 In another similar incident, Arnab Sarkar, an activist of the Hindu Sanhati, attacked Debi Biswas’s home. True to the current practice, the attack was live telecast on Facebook. She tried explaining the long standing dispute in Kashmir which is leading a section of the youth there into ‘terrorism’. She was cut short and a woman in the crowd started mocking her. A man asked her why she did not write about the Kasmiri Pandits. The crowd started agitating terming her as ‘anti-national’. As the police intervened, the crowd started lecturing the police about their duty against such ‘anti-nationals’. As the police tried to mitigate the brawl the agitated crowd started raising slogans of Bharat Mata ki Jai and ‘Deshdrohider Chaamra Gutiye Nebo Aamra’ (We will skin the traitors of the country). A flurry of abuses and threats poured in again over the comments. This video garnered around 2888 shares and around 2.3K likes on the main profile. Arnab Sarkar was accompanied by Ayan Sen, Patel Sarkar and Bhaskar Dey. The video was shared by Debtanu Bhattacharya, President of Hindu Samhati. Hindu Samhati organized several candlelight marches in different parts of West Bengal. 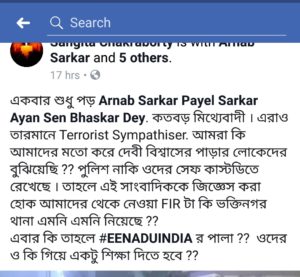 Arnab Sarkar also felicitated Sarbajit for his ‘bravado’ and kept his picture as his profile picture. In another post Arnab Sarkar extended nationalistic greetings to Cooch Behar Bajrang Dal, specifically to Sarbajit and his team. Ayan Sen’s profile on Facebook states that he is presently the General Secretary of BJP Siliguri district, Block 3. 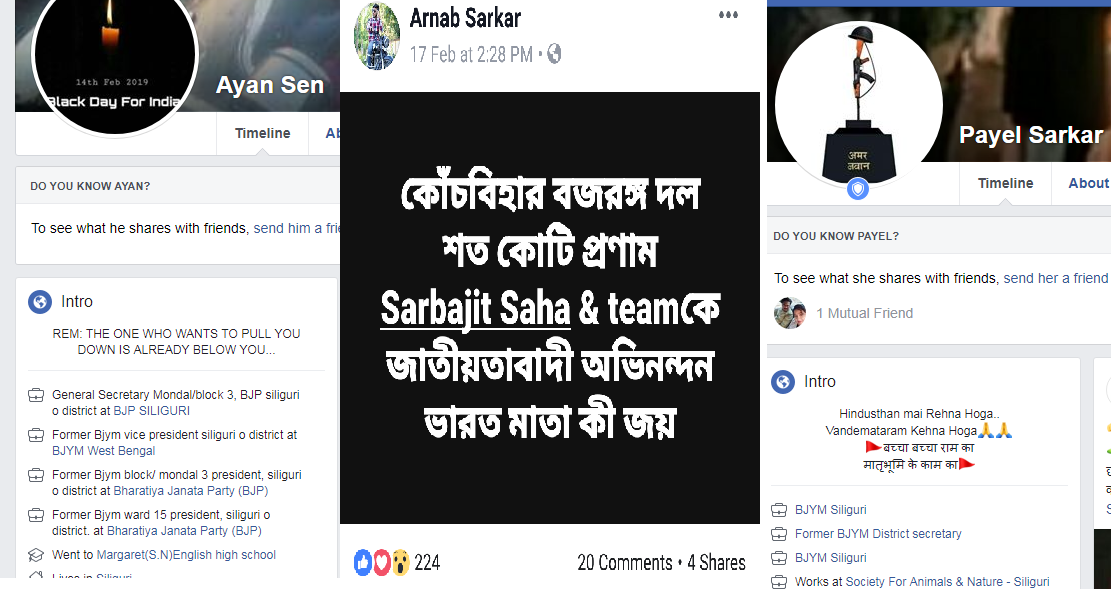 Similar campaigns were being carried out by the Facebook page “Banglar sera Byango”. This page has nearly 1 lakh likes. The group started a campaign called “Deshdrohi Hatao Bharat Bachao.” They started sharing the live videos from profiles of different ‘nationalists’. The group advertised an email id where Facebook users or others can send information about profiles that they consider ‘anti-national’. The group continued with its public lynch call, slander campaign, character assassination, inflammatory posts and fake news (from a website with the same name). On 18th February, the group posted an update, “Everyone stay tuned, got another anti-national in Habra” [translated]. Another FB update said, “Going to unmask another anti-national. Will be LIVE by 9. Stay tuned.” On Tuesday the group published a post mentioning that they are discontinuing the campaign as they are being termed as RSS goons and that some people are trying to raise money in their name. Groups like “Bonno ছেঁচরা” which usually runs pro-BJP, pro-Modi Hindutva campaign shared photoshopped images slandering the woman from Birati, accompanied by hate campaigns. 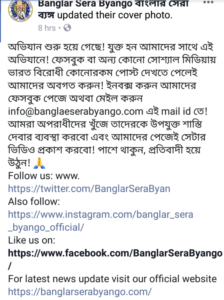 A similar attack took place at Ramchandrapur in the house of Sudip Biswas, by a Hindutva group called “Jatir Kotha”. The Live video was by one Debasish Biswas, an activist with Jatir Katha, via one of his two Facebook profiles, but the video has now been removed. This video is still available in the Jatir Katha page. Debasish has shared photos with Former Chief Minister of Madhya Pradesh Sivraj Chauhan, West Bengal BJP President Dilip Ghosh and Mukul Roy. They also lodged a police complaint against another person named, Debjit Bhattacharjee for similar reasons.

Parallel to these direct attacks, a large number of profiles were engaged in live streaming videos in different groups. Many users started sharing the snapshots of profiles which they felt were ‘anti-national’. Photoshopped images of women were circulated with misogynistic captions, aimed at character assassination and performing a public witch hunt. A profile named Anirban Sarkar,  who claimed to be a Bajrang Dal activist, sent abusive messages to a woman threatening her of physical assault and rape. 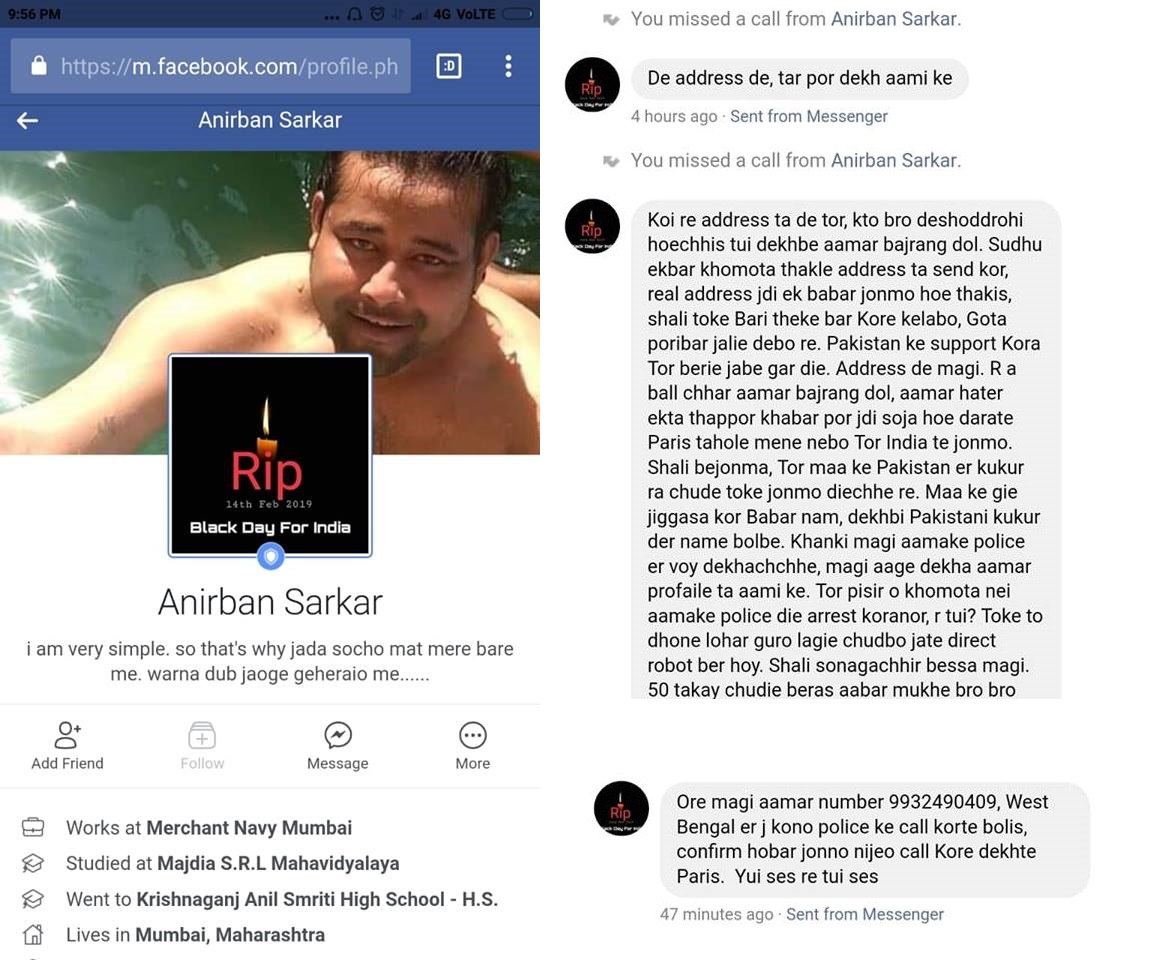 Prior to this, a report on Scroll.in titled “Clean the Nation: Inside the Facebook group that plotted to get ‘anti-nationals’ sacked, prosecuted” reported on a Facebook group called “Clean the Nation” created by a man named Madhur Zucc Singh. The report reads: “The group began with 42 founding members, including engineering students, consultants and entrepreneurs and a youth worker of the Rashtriya Swayamsevak Sangh, the ideological parent of the ruling Bharatiya Janata Party.” The motive of the group was to weed out anti-nationals. Vashishtha, one of the administrators of the group whose Facebook page features a picture of him with Union minister Smriti Irani, added a note: “We ensure you, that if our esteemed Army is doing an external surgical strike in our neighbouring enemy, we will bloody well do an internal one against these enemies within the nation.” A TheKashmirWalla report shows how attacks were organized by the Bajrang Dal against the Kashmiri students. 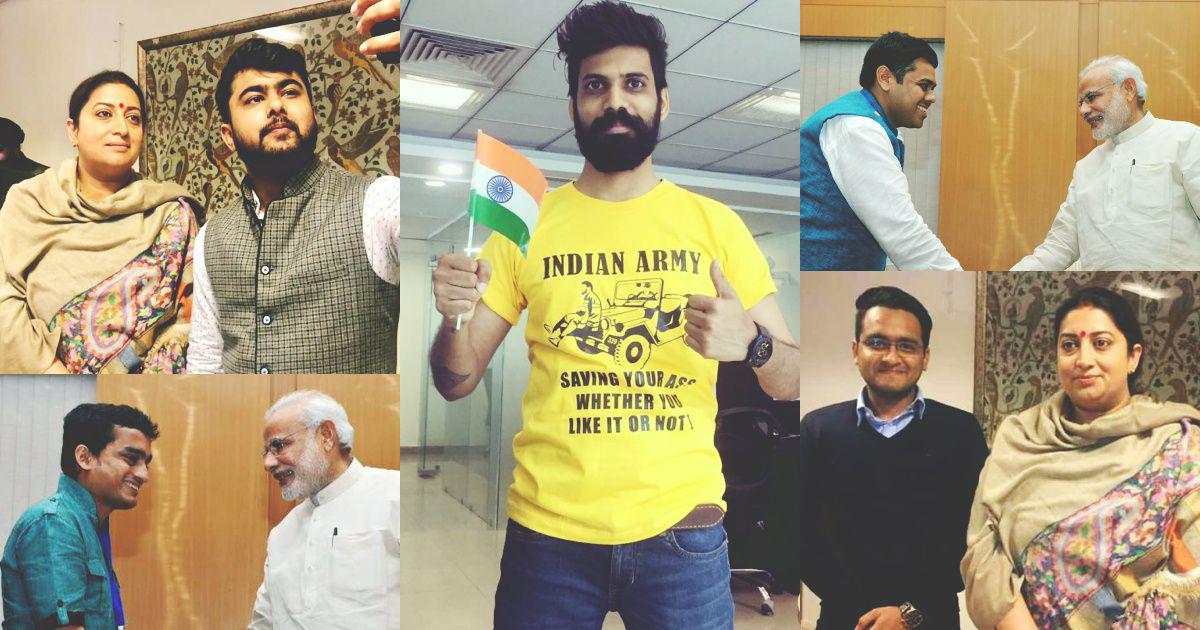 Some of the founders and administrators of the Clean the Nation group. Source: Scroll.in

In West Bengal the online campaign has cooled down as of now, and many of the groups have cleaned their tracks and have returned to the routine duty of circulating day to day fake news and sexually titillating posts and news items. Few days back Cobrapost came out with its massive sting operation report on Bollywood celebrities signing up to run clandestine social media campaigns for political parties in exchange of cash payments. The nation is staring down grim threats of social media mobs managing the upcoming Lok Sabha elections. Meanwhile, West Bengal BJP held a Social Media Meet in presence of President Dilip Ghosh and Vice-President Subhas Sarkar.