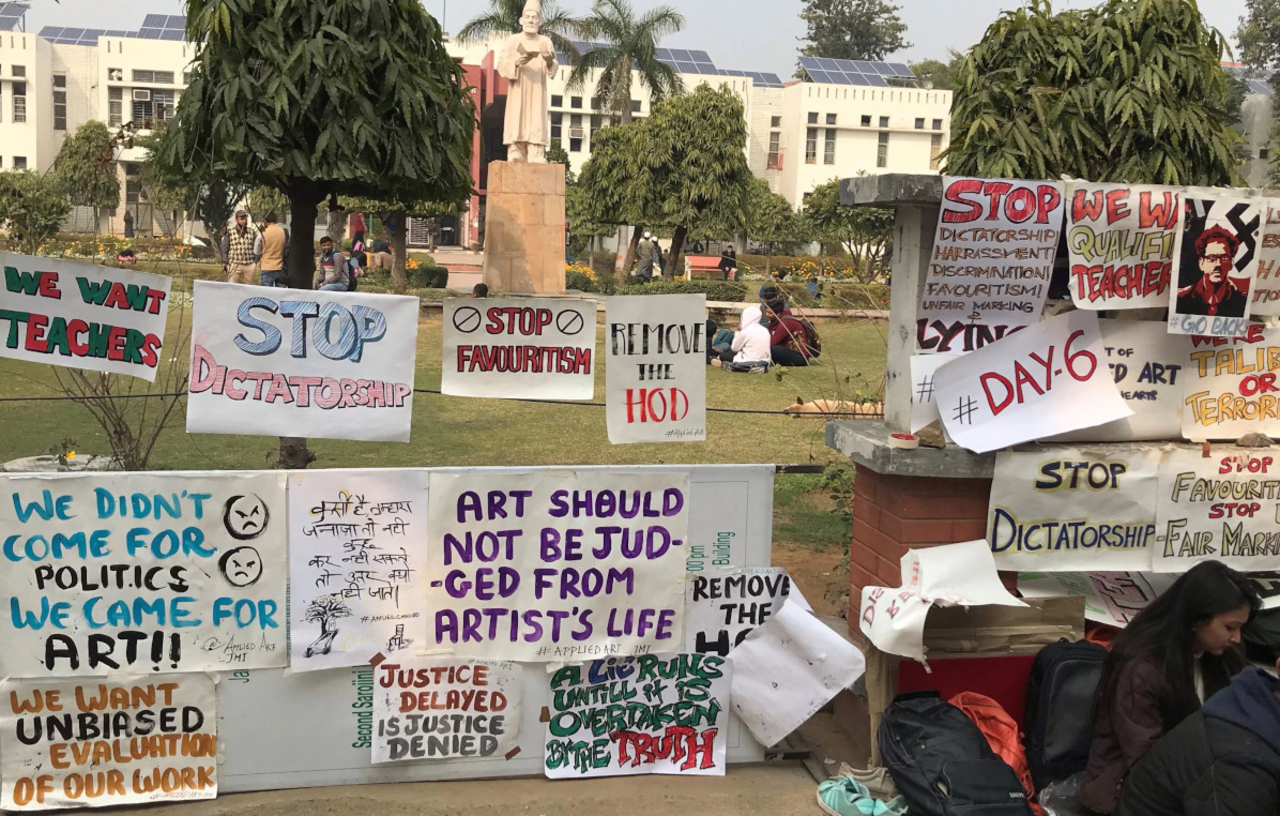 Students at Jamia Millia Islamia in Delhi have been protesting for over ten days, calling out the Head of the Department of Fine Arts for alleged sexual harassment, displays of regional bias, and more. They have been beaten up and groped by goons, yet have successfully pushed the administration to send him on temporary leave, and continue protests calling for his permanent termination as HoD and the institution of better redressal mechanisms. A GroundXero report.

Prof. Hafeez Ahmed stands accused of repeatedly harassing students, in a toxic environment marked with job vulnerability faced by guest faculty, and the apparently unchecked power of a department’s HoD. The current events are unfolding at a campus in the nation’s capital with a long history of student protests, where the student union has been shut down by the administration since 2006, and protests and cases continue against that. Amidst a broader climate marked by targeting of minority institutions in the country, this is a campus with ex-military people employed as campus guards, and police regularly present on campus. Within that, as the current protests focussed an eye on the Fine Arts department, we learnt from students there of an HoD facing accusations of sexual harassment and regional discrimination in grading and otherwise. We learnt a story of administrative inaction. We learnt of a department in which he is the only permanent faculty member, and where the performance game for students is often about being able to suck up to him. Students are calling an end to this. In a way this is a disturbingly familiar story from campuses all around, with specific distinguishing factors. Which makes the protests there all the more important – for the way in which they are connected to such protests elsewhere, and in turn how they can inspire others. 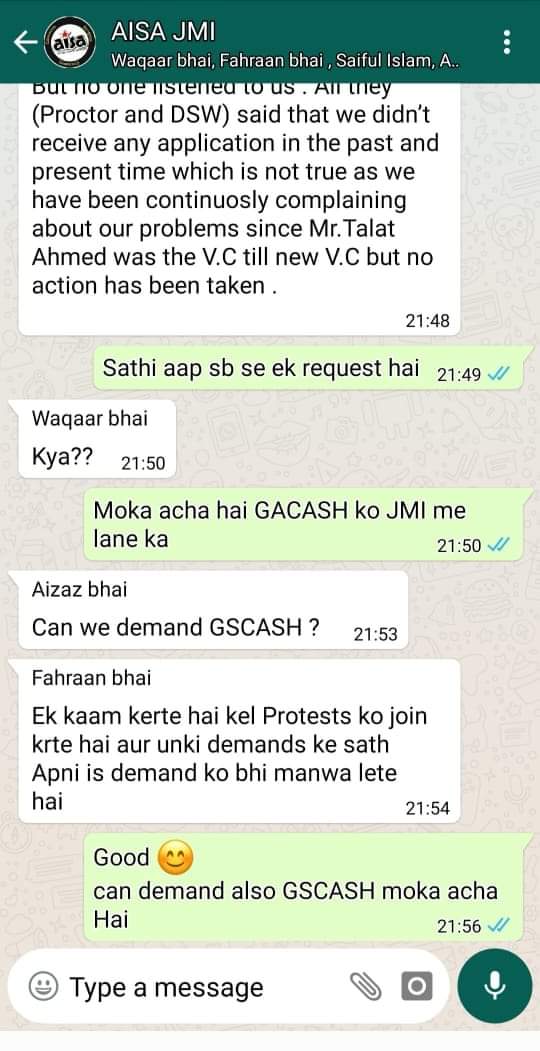 An allegedly forged image that is being circulated, with the aim of suggesting that members of the left affiliated All India Students Association (AISA) are surreptitiously inserting unrelated agenda into the protests. The supposed instance of such an agenda is the demand for the formation of a democratically elected body (GSCASH) to process grievances and harassment allegations!

Before the fightback became sensationalised with media headlines such as “protests turn violent”, Abdul Alim Jafri wrote a piece on the different allegations faced by the HoD. After speaking with different women on campus, he summarised thus:

“The women are alleging that the Head of Department (HoD), Hafeez Ahmed has been misbehaving with female students and passing lewd comments. The students have also alleged that they have been facing irregularities in marks distribution based on favouritism. Another allegation levelled on the professor is that of labelling Kashmiri students as terrorist.

“In the past too students have written to the Dean of Students’ Welfare (DSW) and concerned officials but till date the university administration has not taken any action against him. The protesting students are demanding immediate suspension of the HoD, a safe campus and open marking system like other departments.”

Speaking with GX, Muntaha Amin – a member of Pinjra Tod, and MA student in Mass Communications – said that it’s important to understand how much of Jamia works as a system of feudal patronage. You are expected to cosy up to authority, if you want them to provide some of the support – such as academic feedback – that they should anyway be providing. And for Hafeez Ahmed, it was such a coterie of male students who always hang around him who assaulted the protesting students on the 7th.

Another student said that the three women who went to the police station to file an FIR were turned away with threats. Sameer Ansari – a member of DISSC, and 3rd year BA student in Political Science – said that therefore the registration of an FIR against the HoD and all those who molested women at the protest is one 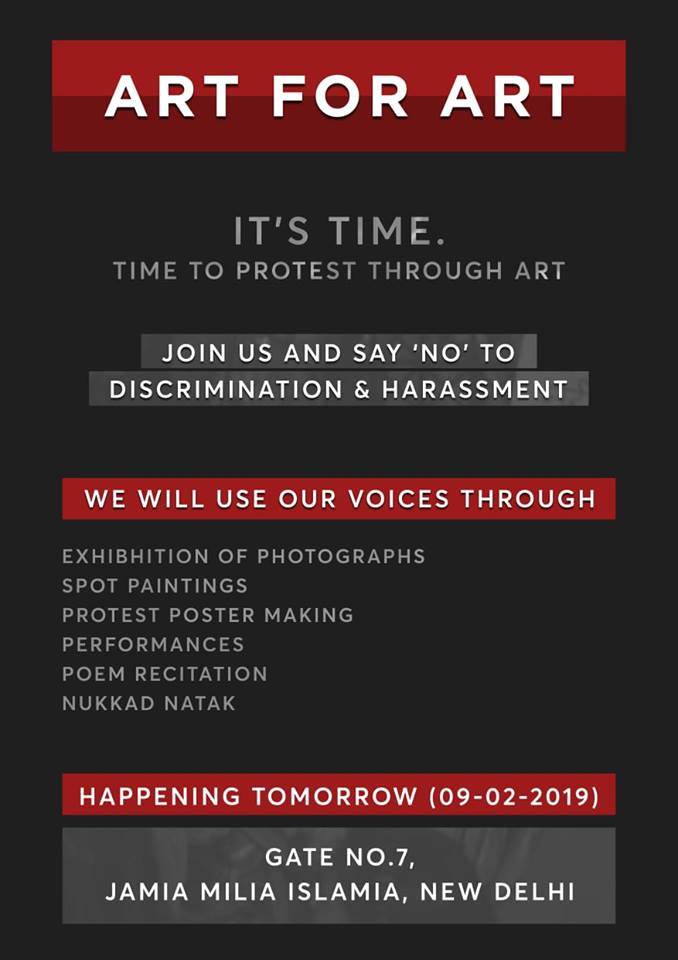 of the demands of the continuing protests. Speaking well beyond midnight on Friday to GX, after just coming from the protest that had been going on till that hour, he stressed that they will continue till Hafeez Ahmed is removed from his position, permanently. Suspending the three students, and sending the HoD on a three month leave, probably with pay, in hopes of burying the issue, is not going to solve anything. He further said that while protestors included people from different organisations and unaffiliated individuals, members of NSUI (the Congress affiliated student union) were never present – yet they were now coming in, saying that those protesting are leftists who have a political agenda, and trying to confuse the issue. NSUI disrupted continuing protests, and in his opinion this allowed the administration some breathing space to simply send Prof Ahmed on leave, or else they might have buckled by now.

In a long Facebook post with a video of protesting students chanting slogans, Pinjra Tod referenced the demand to have a democratically elected body (GSCASH) which can process complaints of harassment, and wrote:

“That the women students of Jamia have constantly redefined what the Jamia tehzeeb is with their pertinent questions and by organising, be it for a non discriminatory, affordable hostel or for GSCASH. This time around, women students from across Universities and colleges watch, stand by and shout together with them: No more!”

Students and organisations from different campuses have started sharing solidarity messages. And the protests go on. 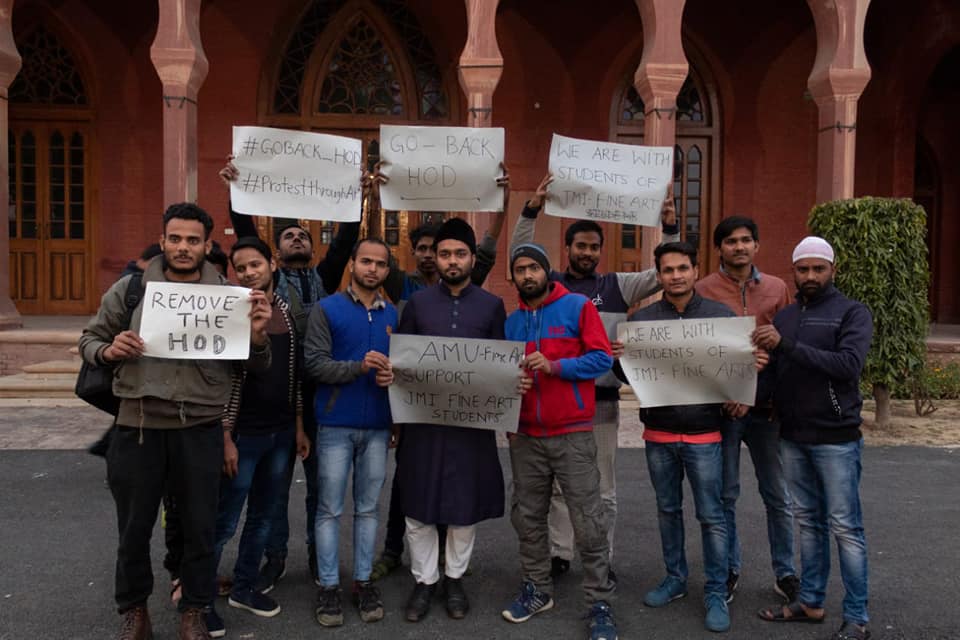 From a series of photos of Fine Arts faculty members in solidarity with the students, shared by: https://www.facebook.com/jmistudentprotest/