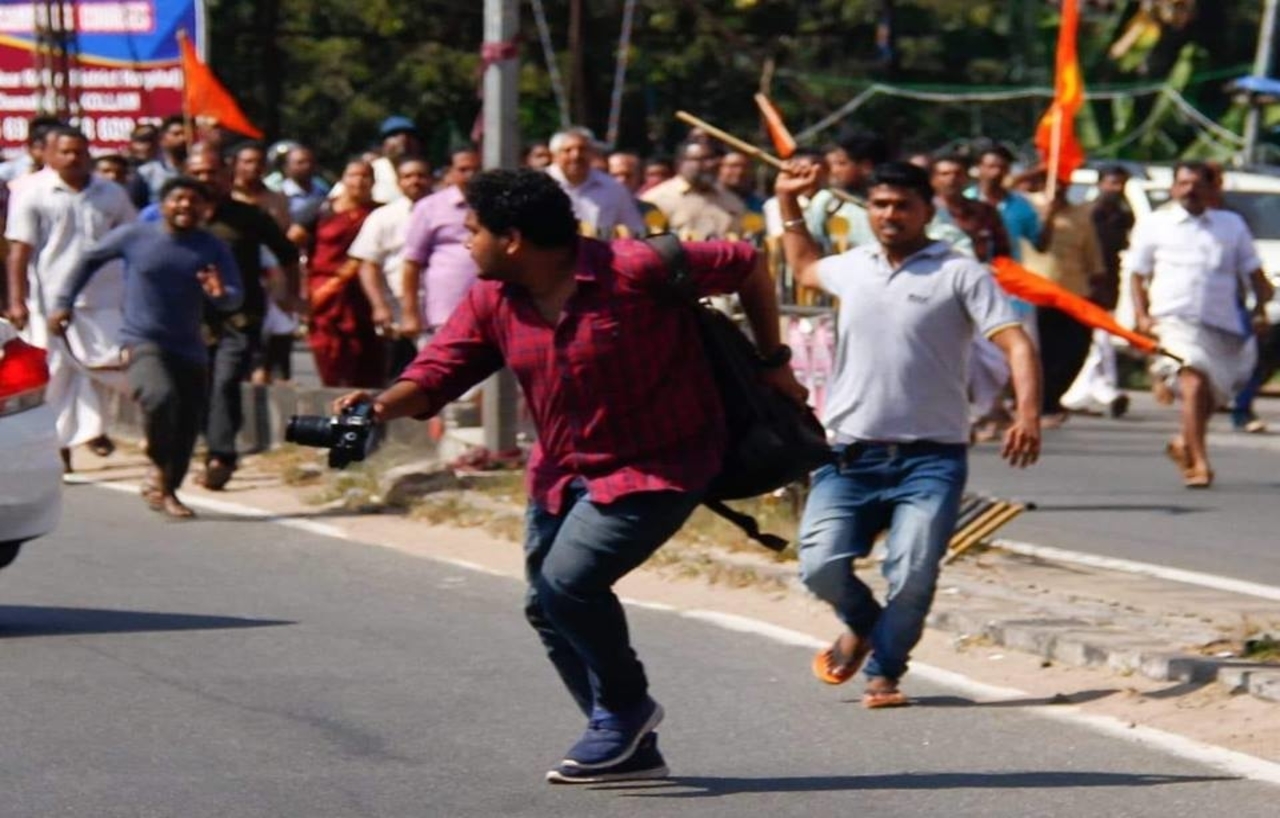 Violent protests erupted in Kerala on Thursday, with mobs backed by BJP pelting stones, blocking vehicles and forcibly shutting shops, following the entry of two women within menstrual age into the Sabarimala temple on Wednesday. The protests were a part of a hartal called by the Bharatiya Janata Party (BJP) and Sangh Parivar outfits, including Sabarimala Karma Samithi, an umbrella organization of various pro-Hindutva groups. A GroundXero report.

Sanghi forces unleashed chaos and terror in the state after two women within menstruating age, Kanaka Durga (44) and Bindu Ammini(42), entered the Sabarimala shrine in the wee hours of Wednesday. The ‘Sabarimala Karma Samiti’, has declared a hartal in the state on Thursday to protest what they called ‘desecretion’ of Ayappa temple.

The ‘protests’ turned to violent demonstrations and attacks. By Wednesday noon, they set up roadblocks at various places, burned tyres and vehicles, and shut down shops and theaters. Initial reports of violence came in from Kodungallur, Kollam, and Trivandrum, but soon spread across the state. The protesters were backed by RSS, BJP and various outfits associated with them.

Dozens of public-sector KSRTC buses were damaged, a driver was injured from stone pelting in Trivandrum district, when he lost control of the bus and rammed it into a shop. Both the driver and the conductor are reported to be critically injured and are in hospital. CPI(M) offices and activists were attacked in various areas across the state, including Trivandrum, Vadakkanchery, Karunagappally, Palakkad, parts of Calicut. A library was set ablaze in Palakkad.

The other victims of the attacks were media personnels. Many reporters and camera persons were beaten, chased, their equipment broken, and gravely injured. Pictures, of Sanghi-goons chasing a cameraman from Kerala Kaumudi in Kollam, and a camerawoman from Kairali TV holding her ground even as she was injured, went viral. Talking to Hasna from Newsrupt, Shajila Ali Fathima, the Kairali cameraperson, narrated how the Sanghi hooligans started attacking the OB van driver from News18, and the cameraperson from Mathrubhumi TV. “I was shooting their demonstration, ignoring their threats of killing me, and breaking my camera. I saw them chase another reporter from Asianet, who happens to be the daughter of the resident editor of Janmabhumi [RSS’ Newspaper], and RSS member. They were sparing no one. I was then attacked from behind and asked to stop shooting. I’ve covered various protests, but have never felt so unsafe until now.” 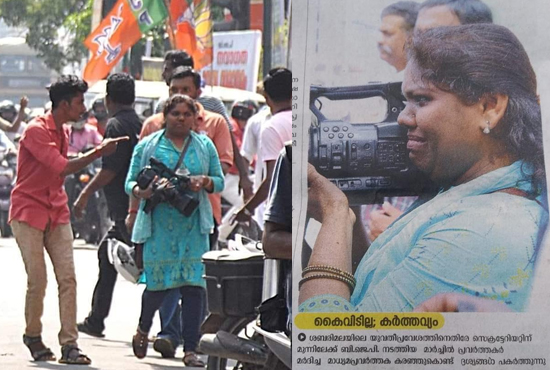 Feminist, human rights and civil society activists who organized programs in solidarity with the women who entered Sabarimala were also attacked. In Vanchi Square, Kochi, during one such program, the hooligans belonging to BJP and its youth wing, burst on to the stage with Ayyappa chants. “They were responded with louder Jai Bhim slogans,” says Rekha Raj, academic and human rights activist, who organized the program.

A program in Calicut in solidarity of women’s right to enter Sabarimala was stopped violently. “They would have killed us if we had stood there any longer”, said Shahida, one of the organisers of the event , to a reporter from Keyboard Journal. “They hit us on the head, in our backs, with objects we couldn’t see. They also threw at us coconuts, pineapples, eggs and whatever they could lay their hands on. They hit Renoir with a helmet”, says Yamuna, a law student. Almost everyone who was part of the program in Calicut was badly injured, and many had to be admitted to Beach hospital there. “They couldn’t recognize me or VP Suhara [senior journalist from Madhyamam], else they would have hurt us further”, added Ambika, a senior journalist.

This video shows the terror unleashed by RSS and other Hindutva goons on a peaceful program saluting Bindu and Kanaka durga, in Kidson corner in the centre of Calicut city. Around 200 people ganged up and badly injured many comrades, including women. They have now been admitted to Beach hospital I'm Calicut, some with serious injuries, some injured in the head.Among the hurt were Rahma Thyparambil Yamuna Chungappalli Baburaj Bhagavathy Renoir Pananghatt @akhil menikot Cp Jishad Sreekanth Usha Prabhakaran Shahida Shaa Amrutha N O P RaveendranThe city of calicut must rise and resist these terrorist forces. Isolate and defeat hindutva fascist goons.There are also reports of similar attacks carried out in other parts of the state- vadakkanchery CPM office, Karunagappally, Kodungallur, etc.

In Karunagappally, where section 144 had been imposed, shops owned by muslims were targeted and attacked on Wednesday evening. However, Thejas News reports that by Thursday evening, the RSS and BJP goons involved in the attacks were beaten back.

There were multiple reports of the ‘Sabarimala Karma Samiti’ mob attacks being met with retaliation by the public, on Thursday. In several places people took to the streets to resist the hooligans forcibly shutting down shops. A video showing people resisting the strikers on a motorcycle rally in Calicut went viral in social media. The State government has issued guidelines for citizens to document all incidents of violence and notify the authorities at the following helpline number (9497998995).

Following the attacks on journalists, the Kerala Union of Working Journalists (KUWJ) passed a resolution to boycott all press conferences called by the BJP, starting with the BJP State President Sreedharan Pillai’s press meet on Thursday.

A few VHP activists were arrested after weapons were seized from a temple in Sweet Meat street in Calicut. On the other hand, Pandalam police has reportedly taken two CPM workers into custody in connection with the death of an Ayappa devotee, Chandran Unnithan(54), who succumbed to his injuries sustained allegedly during a stone pelting by CPM cadres. Sabarimala Karma Samithi worker Chandran passed away at Believers Church Hospital, Thiruvalla, at around 11 pm. BJP’s National IT chief, Amit Malviya tried to encash on the death to spread further tension. Malviya tweeted, “You killed an Ayyappa devotee, Pinarayi Vijayan.” During a press meet, the Chief Minister denied this as rumors and responded “How can stone pelting lead to a death due to heart attack?” 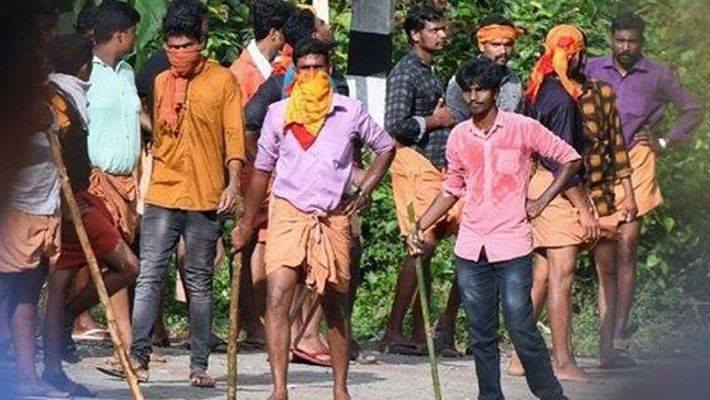 According to latest updates, at least 750 people have been arrested and around 700 people have been taken into preventive custody for various hartal related violence. A Special squad will be formed by the district police chiefs to investigate into the matter.The Special Squad will conduct an inquiry and hand over the list of the accused to the district police chief. The arrested will also be liable to pay for the damages to KSRTC buses and other public and private properties.

In latest development as reported by The Hindu, a 46-year-old Sri Lankan woman offered prayers at the Sabarimala temple on late Thursday. Ms. Sasikala, as identified by the police, had walked up the “18 Holy Steps” without any hindrance and offered her prayers to lord Ayappa.

The Supreme Court will hear on January 22 a contempt plea against the Sabarimala temple tantri for shutting the sanctum for purification.