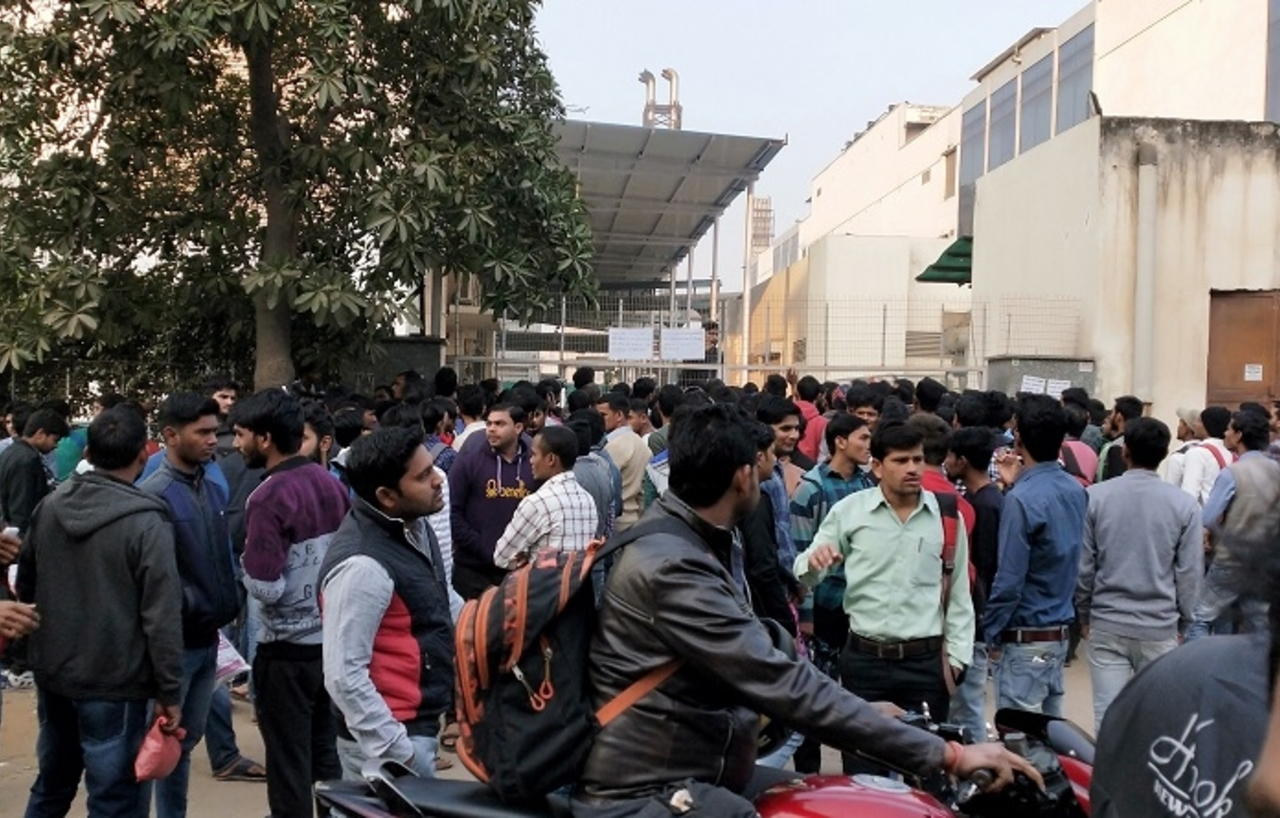 On November 29, around 1,200 workers of the Hipad Technology India at Noida Sector-63, which makes Xiaomi and Oppo phones, went on protest against en-mass sacking of workers without any notice. Mainstream media reported rampage, pelting of stones and barging into the factory by the workers when they were stopped at the gate. Two days later, on Monday, around 500 workers again gathered in front of the factory, but Police beat them up and forced them to leave the place. A fact finding team comprised of student activists from an organisation called Collective, visited Noida on December 5. The team talked to the workers about the reasons for the protest that took place, and the conditions right now. A GroundXero report based on the report of the fact finding team.

News reports in Economic Times and other local media, on 29th November evening, mentioned yet another ‘workers on rampage’ story, totally erasing the workers’ version of events from the narrative. This relates to a situation of management-worker conflict in Hipad Technology India Pvt. Ltd. situated in Noida A-block, Sector 63. The company makes mobile phones for Oppo and Xiaomi.
On 29th November, 200 workers suddenly found their names on a list put up by the company, announcing a break in service. Their biometric punching cards stopped working and they were not allowed to enter the factory premises. This meant nothing less than termination without notice. This was not an isolated incident. Almost close to 2000 workers saw similar fate in this company since Diwali this year. On the same day, as thousands of peasants from across the country were marching to Parliament in Delhi, more than one thousand workers burst out in spontaneous protest against this sudden undemocratic decision of the management. Many of the enraged workers forced their way inside the factory premise and rummaged the production line.

However, soon the police force rushed in, and established ‘peace’. Workers told the fact finding team that at least 100 workers were detained on 30th November and few workers were arrested again the next day, though they were all released subsequently. This is apart from the threat and abuse workers faced. The team members also saw police force deployed in front of the production house, and picking up two workers who had come to work, showing that the repression is still on.

Hipad management told several media houses that they have not terminated the workers but given a ‘break’ as there are some problems in production. They claim that they have merely asked the contractors to ‘reduce the workers’. A company source mentioned in the news is quoted as saying “It is clearly mentioned in the terms and conditions of the contract that the company can reduce the number of workers without notice”. This is an explicit flouting of labour laws in the country.

Workers told the fact finding team that this is not the first time but the company is terminating workers gradually in trances, since Diwali. During Diwali the workers were offered an optional vacation of three days. As the company prefers workers outside from the state, many of those who opted for this vacation had to extend the off-days beyond the three days period. It is to be noted that the extensions were officially granted by the company. But these workers were shown absent in production and their service was terminated very soon.

With a laughable bonus like Rs. 1.5 to Rs. 2 in Diwali, frequent salary cuts has been also happening along with the downsizing. A number of terminated workers have not received their salary yet. The 200 workers, terminated on November 29, were told to contact their contractor for the salary between 10th to 12th December.

The company was employing around 4000 workers as production peaked before Diwali, and now after downsizing has around 2500 workers, with bulk of the workforce being contractual. All the contract workers here receive Rs. 9,300 for per month. According to the fact finding team nearly every worker does overtime on an average of three to four hours per day. Overtime is given at a rate of Rs.100 per hour. As the team spoke to a number of workers, overtime seemed to be the only means to sustenance. Monthly room rents in the area are around Rs. 5,000-6000. It is through making workers work overtime, 12-13 hours of shift, that huge amounts of production was squeezed out of the workers before Diwali to meet higher sales during the festival season. Sometimes ‘overtime’ for non-working days were not paid, workers have been asked to come on Sundays and then the payment for such non-working days were not given. Some workers alleged various exploitative forms of pay-cuts like, cuts for going to the bathroom, for found standing idle just for a minute, were regularly deducted as punishments. While the workers are officially told the lunch break is for an hour, they are given a maximum of 35 minutes and they have to report to the assembly line within that time.

All these workers employed here are contract workers, with another 600 of permanent workers directly from China. Separate treatments for the permanent and contract workers are prevalent here as well, like any other company. Moreover these contract workers get employed via more than one contractor, such that even under one roof the workers get divided in various levels.
Despite the fact that the massive chunk of workers in the company holds either ITI, Polytehcnic or even B.Tech degrees, they all were employed as trainee/apprentices. Like school children they are asked by the supervisor to stand separately for thirty minutes raising hands, if any mistake happens in the assembly lines. The conditions of work inside the factory are one of coercion, as stated by many workers. This includes physical punishments like making ‘murga’ to being slapped by Chinese supervisors.

The workers, ninety percent of whom are migrants – as the company does not prefer local people as a policy, now are confused and in a dilemma, whether to join some other company or not, as Hipad is still saying that this not a termination but only a temporary break. With practically no earnings, the capacity to pay for rent and food is shrinking every day. A lot of them are also planning to go back to their villages.