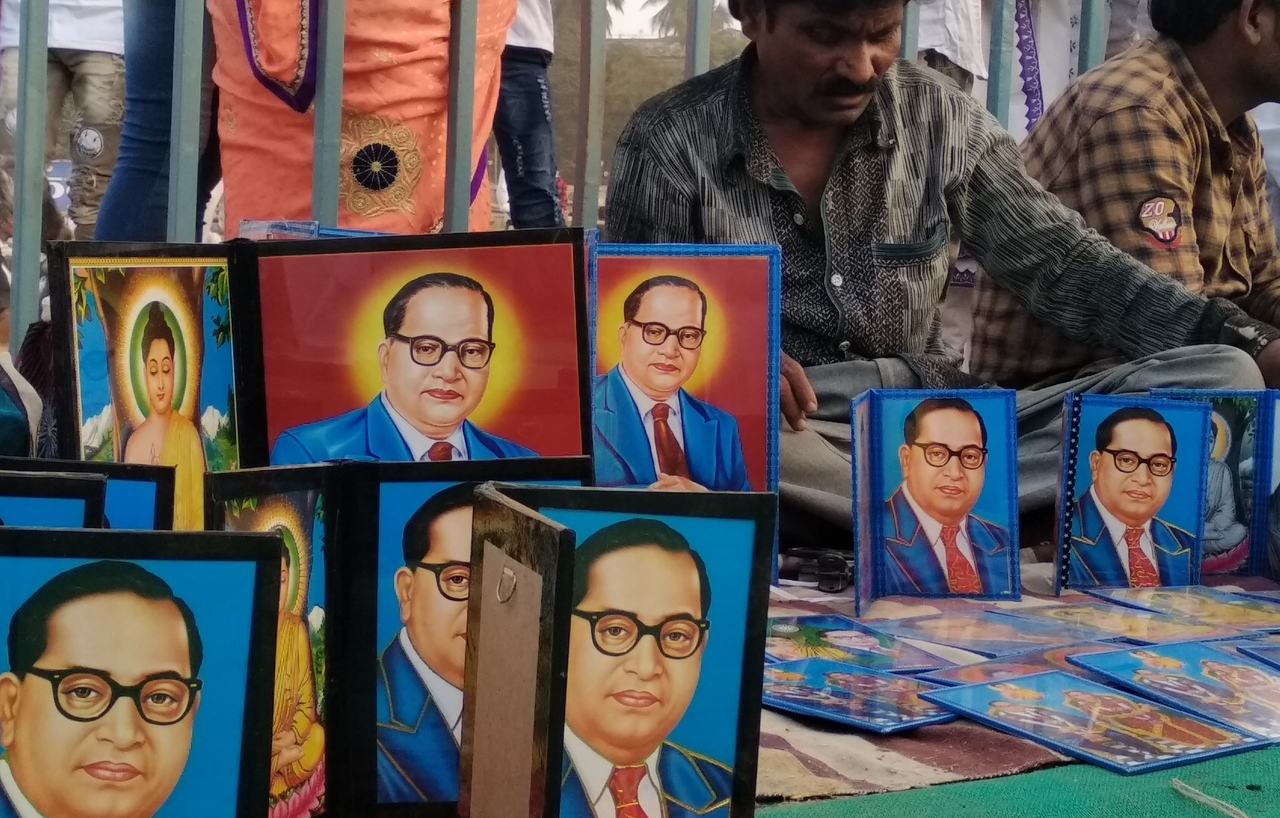 Lakhs of People gather to remember BR Ambedkar at Mumbai, blacked out by Media

6th December for Indian mainstream media means one whole day of baying for blood on the question of Ram Temple, “special coverage” and “breaking news” of VHP-RSS-Shiv Sena’s calls for justice for Hindus in this country, and so on. What the media completely blacked out however is one of the country’s biggest single annual gatherings that takes place every 6th of December in the heart of Mumbai. Tens of lakhs of people from across the country gather on this day at Chaityabhumi in Dadar, to observe the death anniversary of Dr. B.R.Ambedkar. While this is usually a somber occasion, this year’s Chaityabhumi saw palpable tension and rage about the country’s current political situation, and the resolve to resist. GroundXero reports from Shivaji Park, Dadar.

6th December 1956 was the day Dr. B.R. Ambedkar’s body finally gave up, only few days after finishing his final manuscript, “The Buddha and His Dhamma”. His last days saw a sharp deterioration of his health, together with a deepening sense of sadness over the unfinished battle against caste, and a sense of worry about the future of the marginalized people in free India. 62 years later, his worries are perhaps truer than ever. From organised lynchings to near wiping off of the SC/ST Atrocities Prevention Act, to dilution of reservation policy – this country has seen unprecedented rise in engineered attacks against Dalits, Muslims and Adivasis over the past few years.

A Buddhist cremation was organised at Dadar Chowpatty beach Chaityabhumi on 7th December 1956, attended by half a million grieving people. A conversion program was organised on 16th December, so that cremation attendees could also convert to Buddhism at the same place. Since then, every 6th of December, tens of lakhs of people from across the country flock to Chaityabhumi to pay homage to their loved leader. Below are a few snippets from this year’s gathering, organised at the nearby Shivaji Park in Dadar. 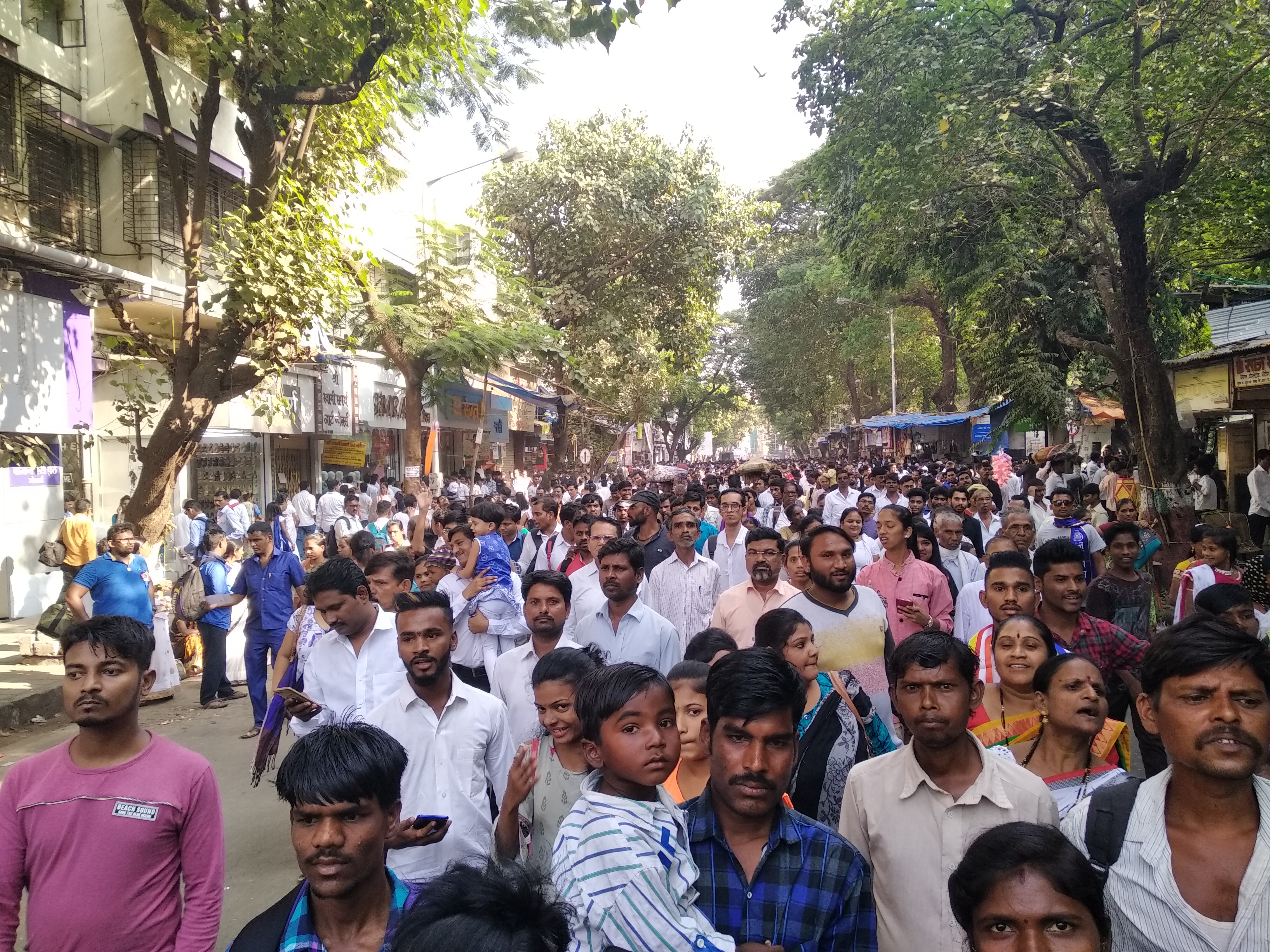 Thousands of visitors walking from Dadar station towards Shivaji Park 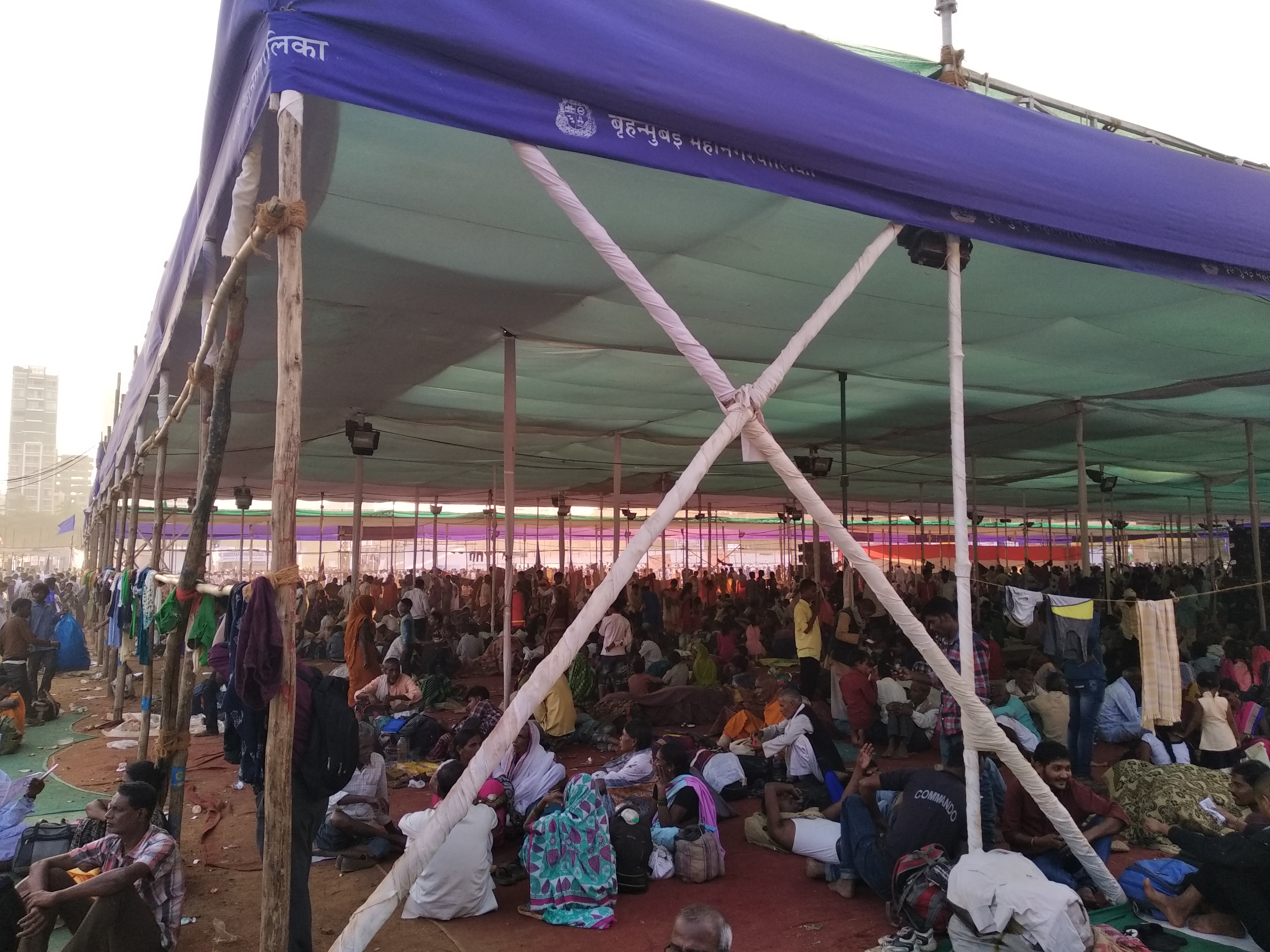 One of the tents at Shivaji Park mainly for people from outside of the state. 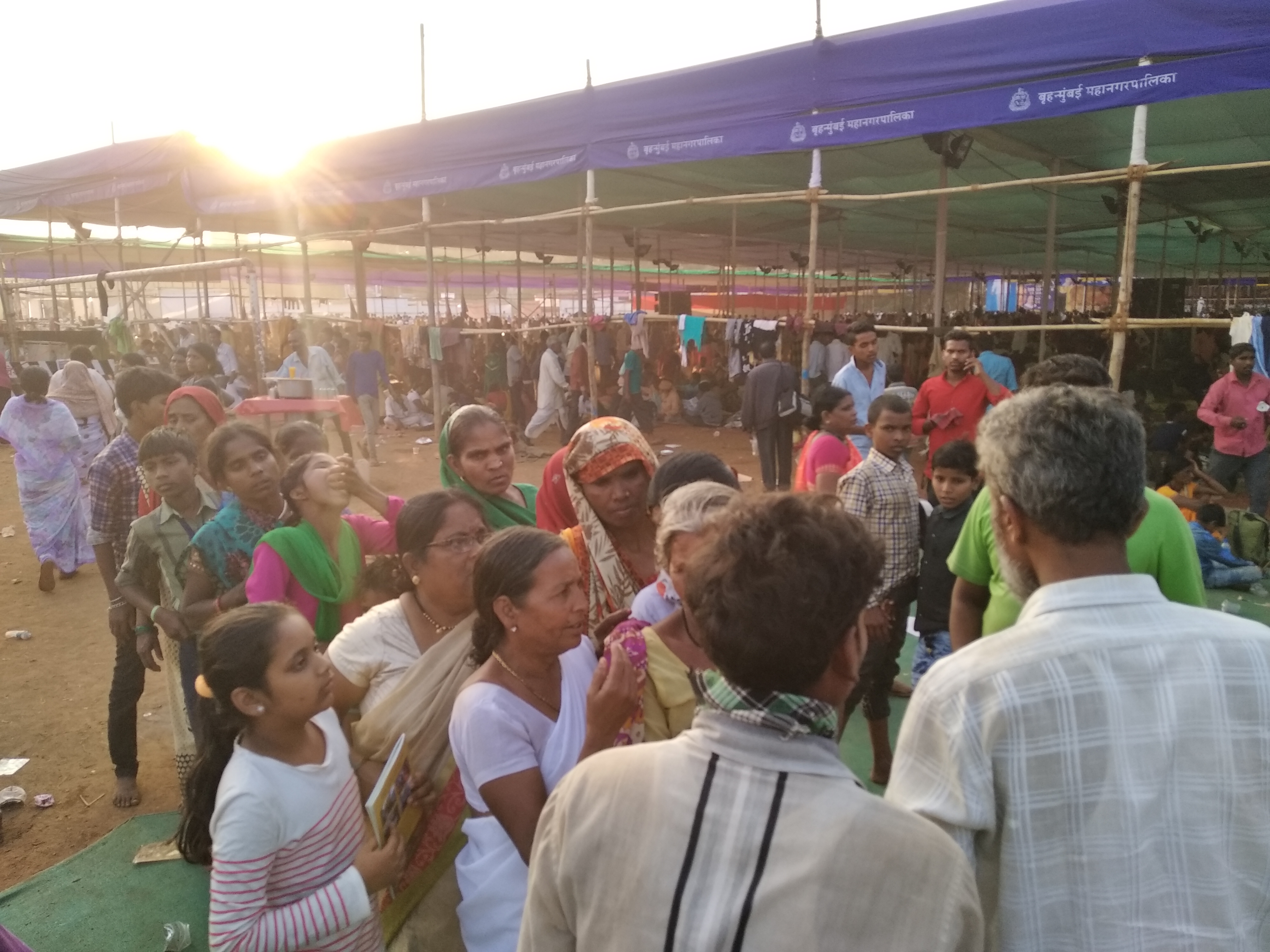 Visitors queuing up for food 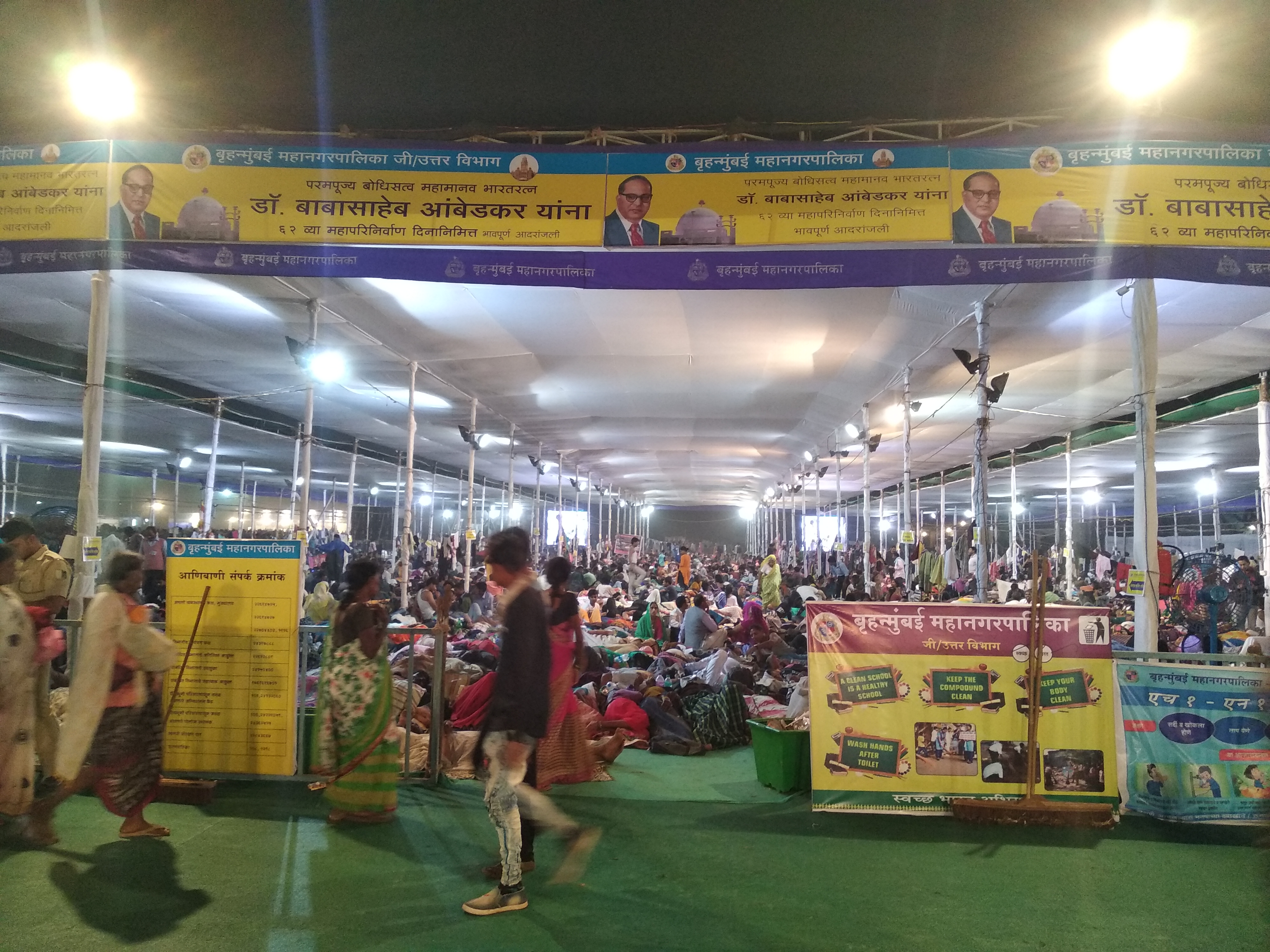 Another of the tents 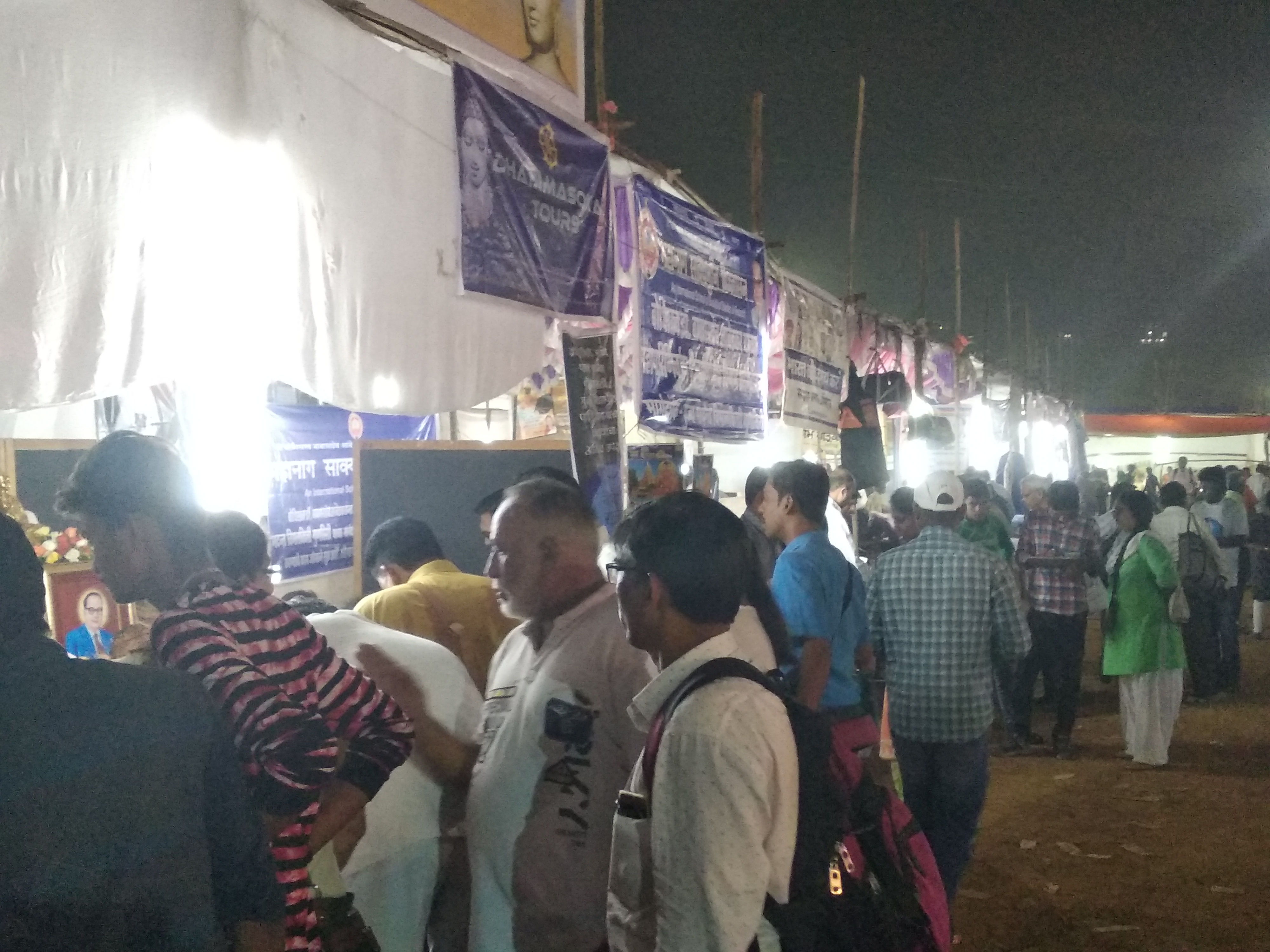 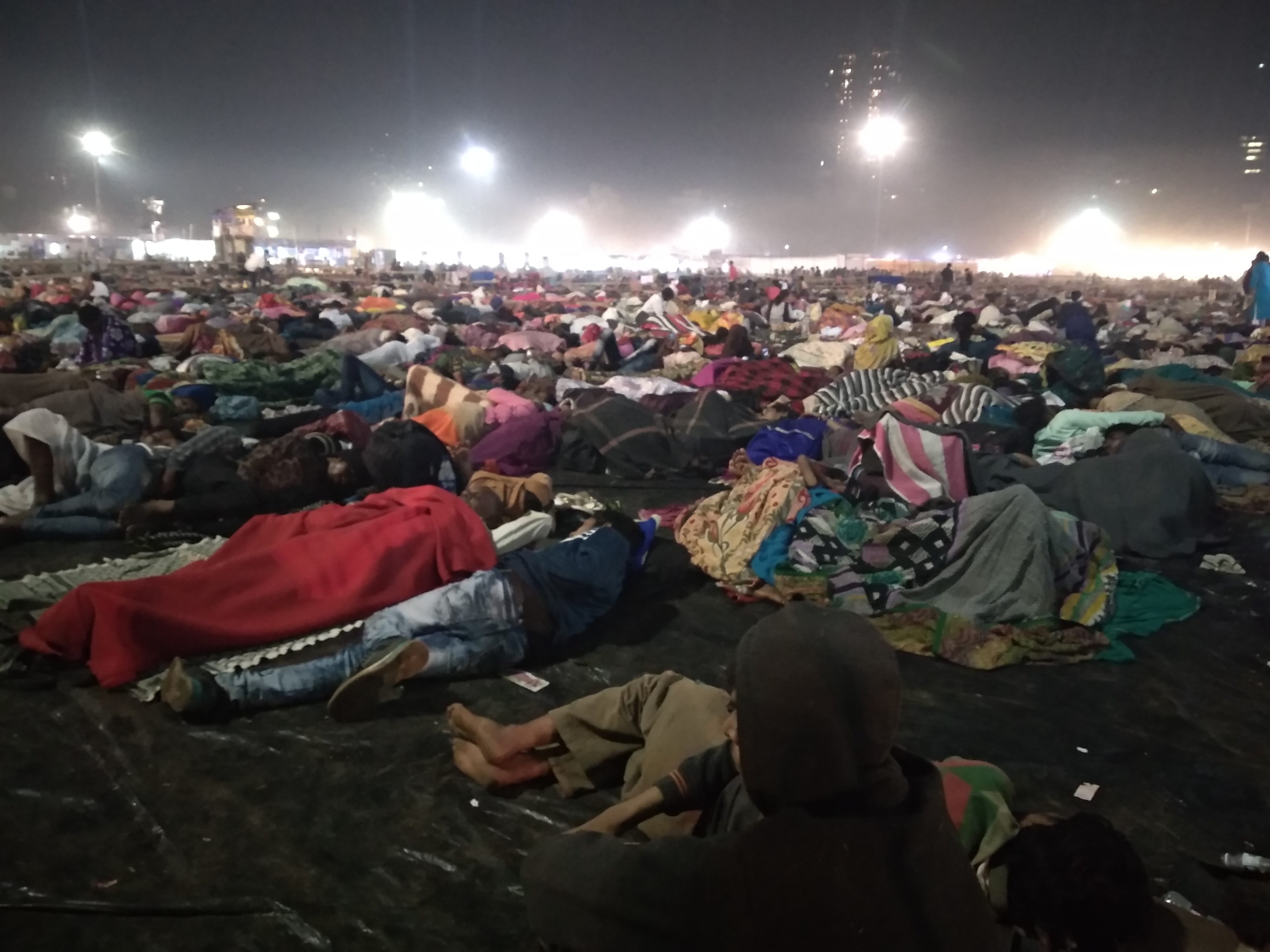 People came from all parts of the country – from UP, Bihar, Madhya Pradesh, Chhattisgarh, to Rajasthan, Gujarat, to Karnataka, Telangana, Andhra Pradesh. Street side makeshift stalls of books, flags, statues, idols, calendars, badges, etc came up on 5th itself. Thousands of people lined up their small merchandise along the streets. A common sight was the Constitution of India, volumes after volumes were getting sold in no time. “We come here every year for a little peace. We just want to see the place where he worked [referring to Ambedkar in Mumbai],” said a woman in her eighties, who had come with her family from Uttar Pradesh. One person from Ulhasnagar, one from Pune and another person from Akola mentioned that they were there when the attack on Bhima Koregaon visitors took place last year. All expressed indignation at the police doing nothing to stop the attacks. Instead the visitors were allegedly lathi charged. One person spoke about how the local shops had shut for business from beforehand, quite unlike earlier years which he claimed shows that the attack was pre-planned. Asked if they would visit Bhima Koregaon this year, they said yes. One of them claimed the crowd will be bigger this time since people don’t want to cower down before force. 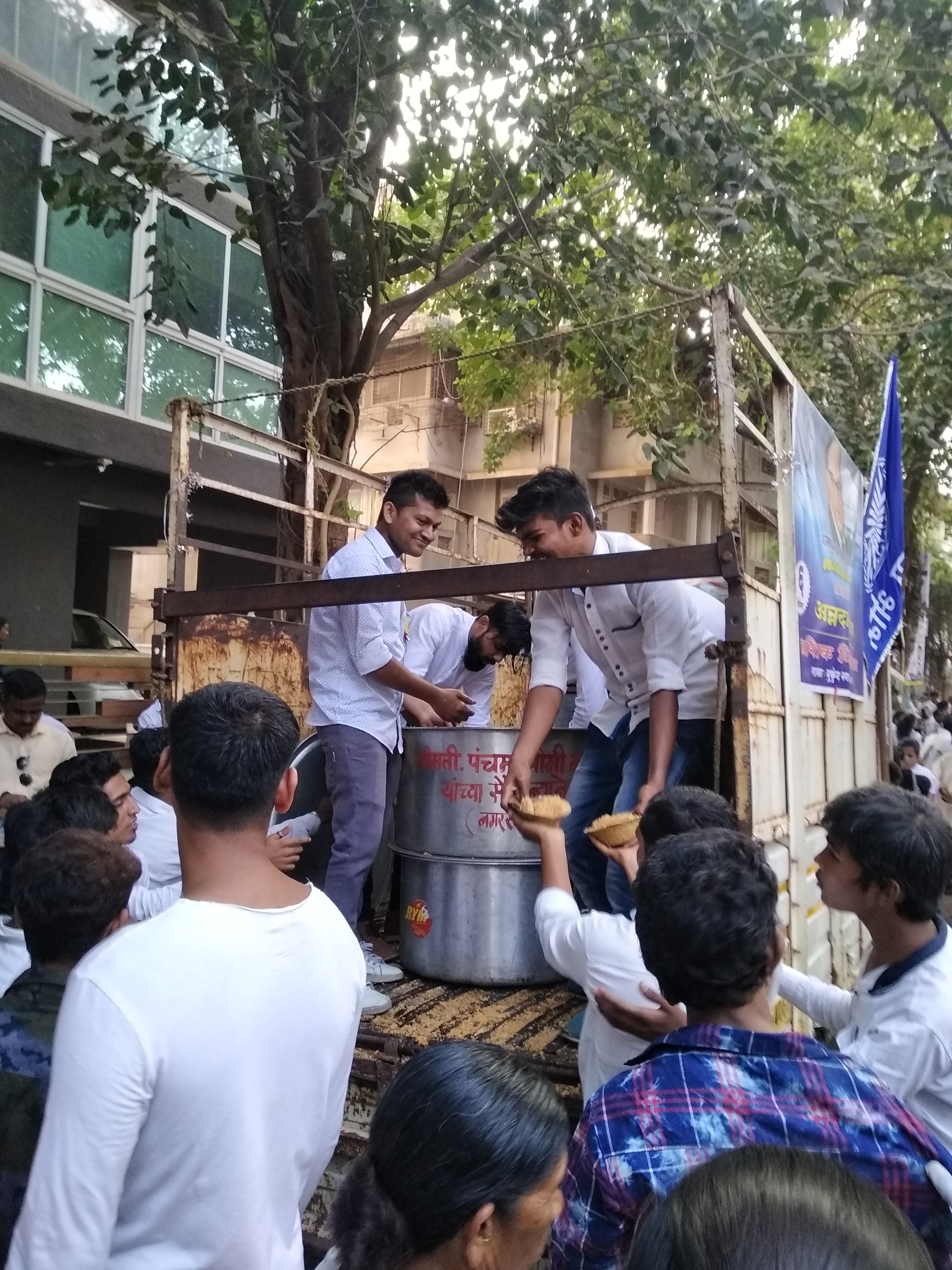 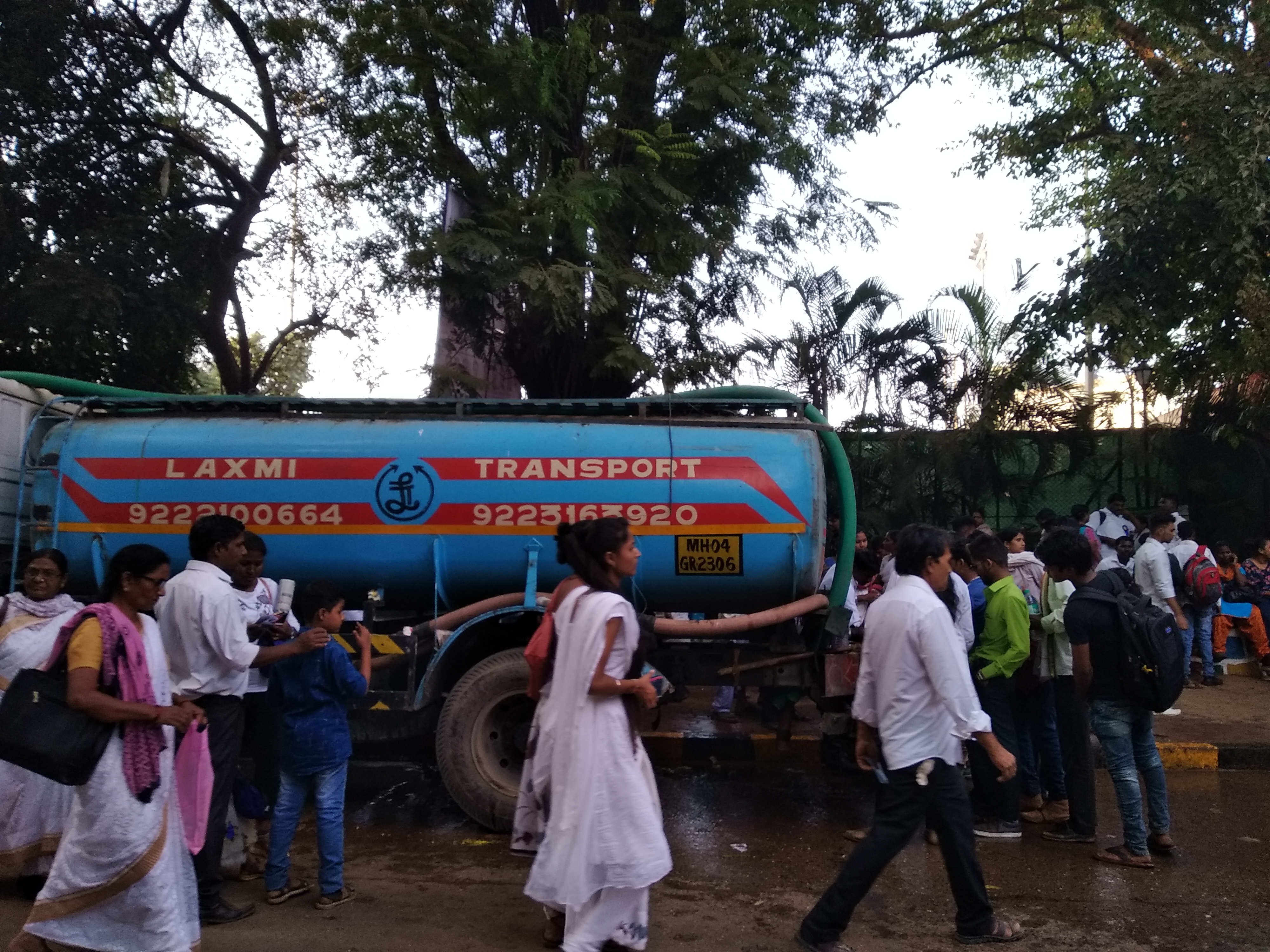 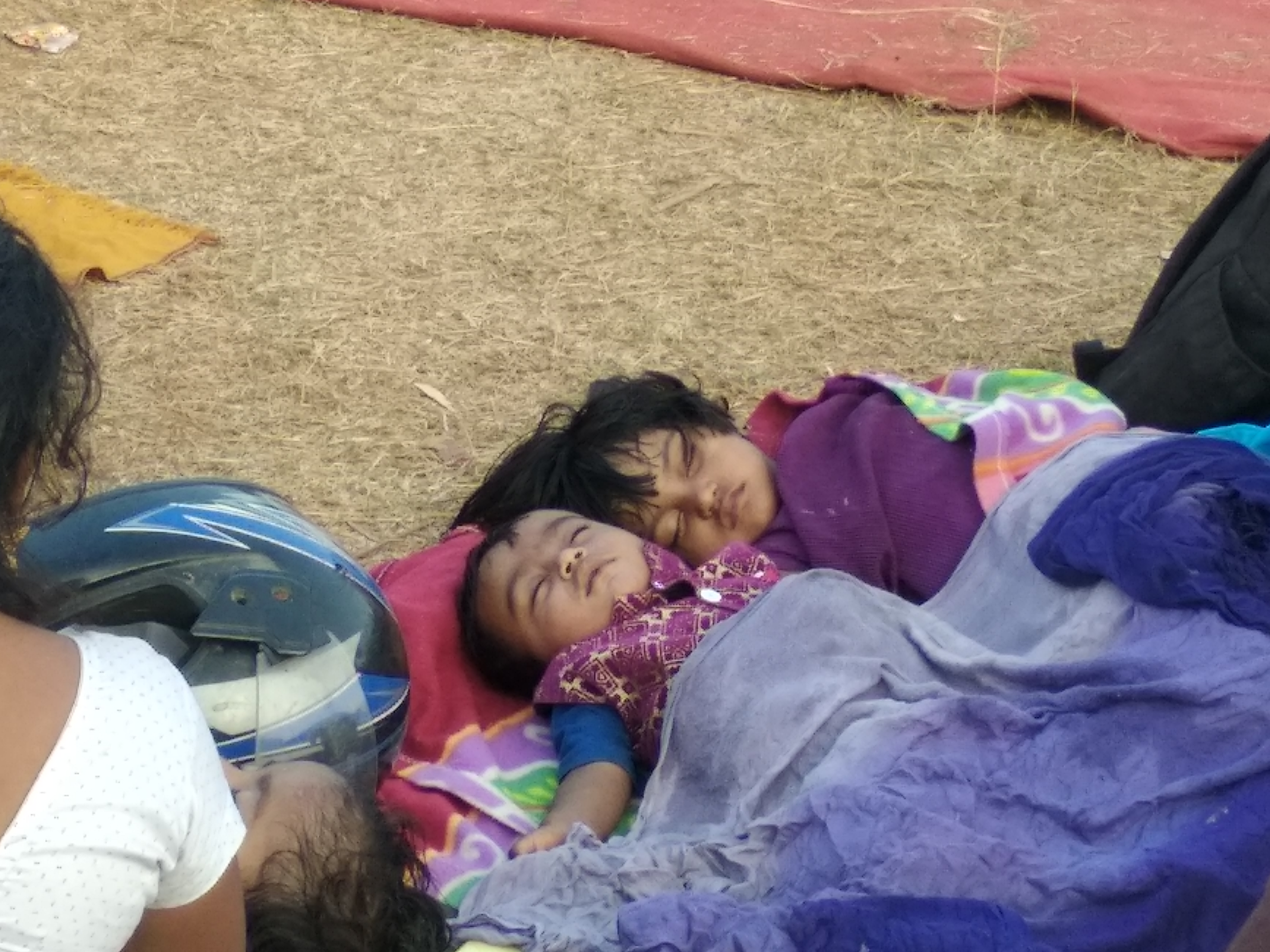 Three women from Morena, Madhya Pradesh, spoke about the BJP becoming unpopular among people there, and how they think it is likely Congress will win this time. This was echoed by several visitors who said that the real issues are being ignored under the present Government. Some expressed concern about the alleged EVM scam.

One farmer from UP said whether it is the BJP or the Congress, the life of farmers and the poor of this country will not change. A group of youth from Meerut talked about Bhim Army and their leader Chandrashekhar Azad. They are studying in different diploma courses, one of them is training for the armed forces. They talked about how Dalit youth in Western UP have been taking the resistance back into the camps of the upper caste hegemons. Chandrashekhar Azad had recently announced that Bhim Army is going to participate in this year’s Bhima Koregaon Elgar Parishad to be organised on 31st December – 1st January in Pune. Last year after the 200th year celebrations, the Bhima Koregaon visitors were attacked by Hindu right wing groups. Several witnesses have claimed that Sangh Parivar leaders like Shambhaji Bhide and Milind Ekbote played key role behind what the media claimed were “riots”. While Bhide and Ekbote were given immediate bails, Pune Police on the contrary captured several workers, activists, lawyers, writers and professors in a nation-wide police crackdown on democratic movements – holding them responsible for “instigating the riots” and more, in a move that has led to a national outcry against Government attacks on democratic movements. 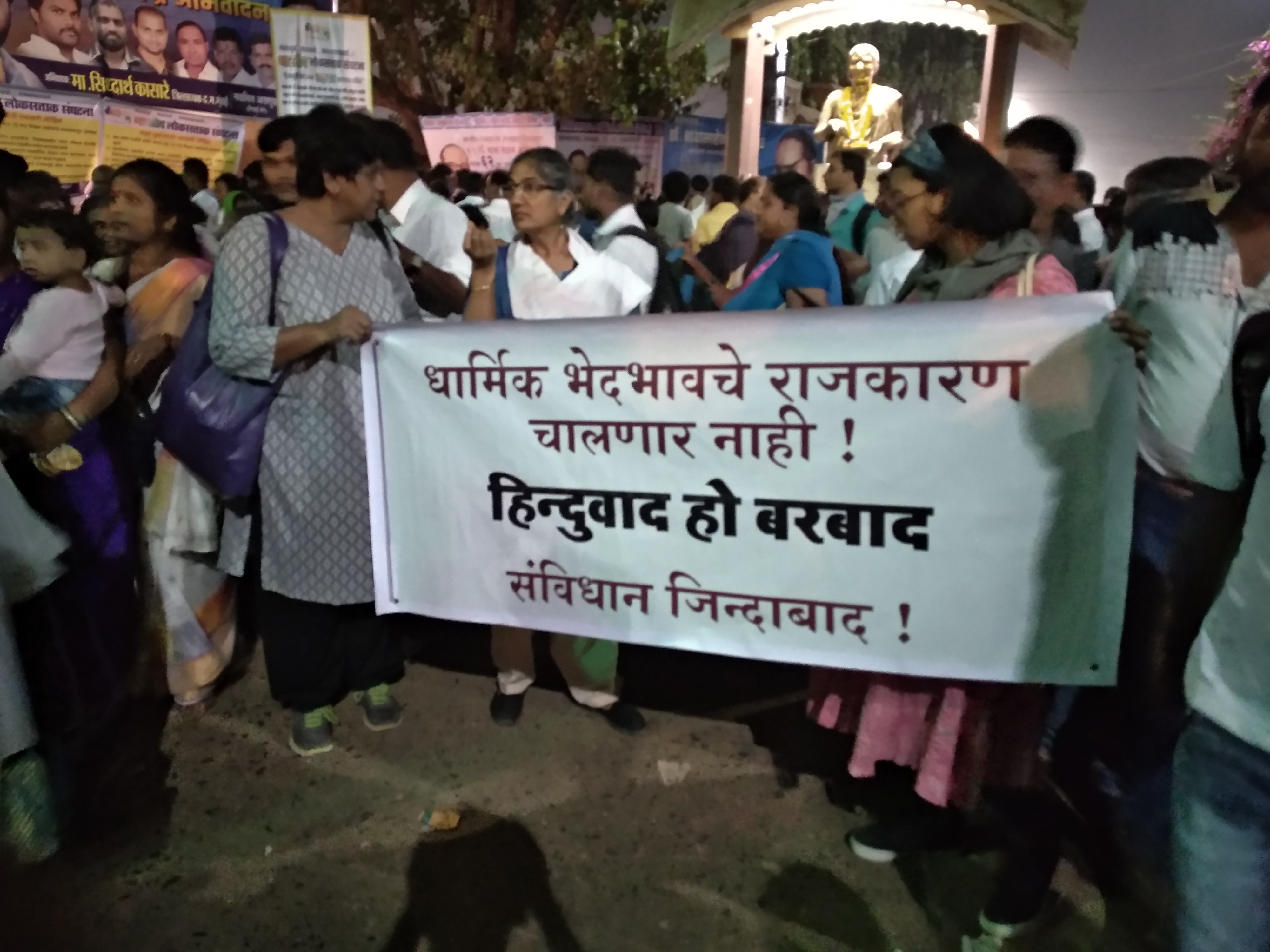 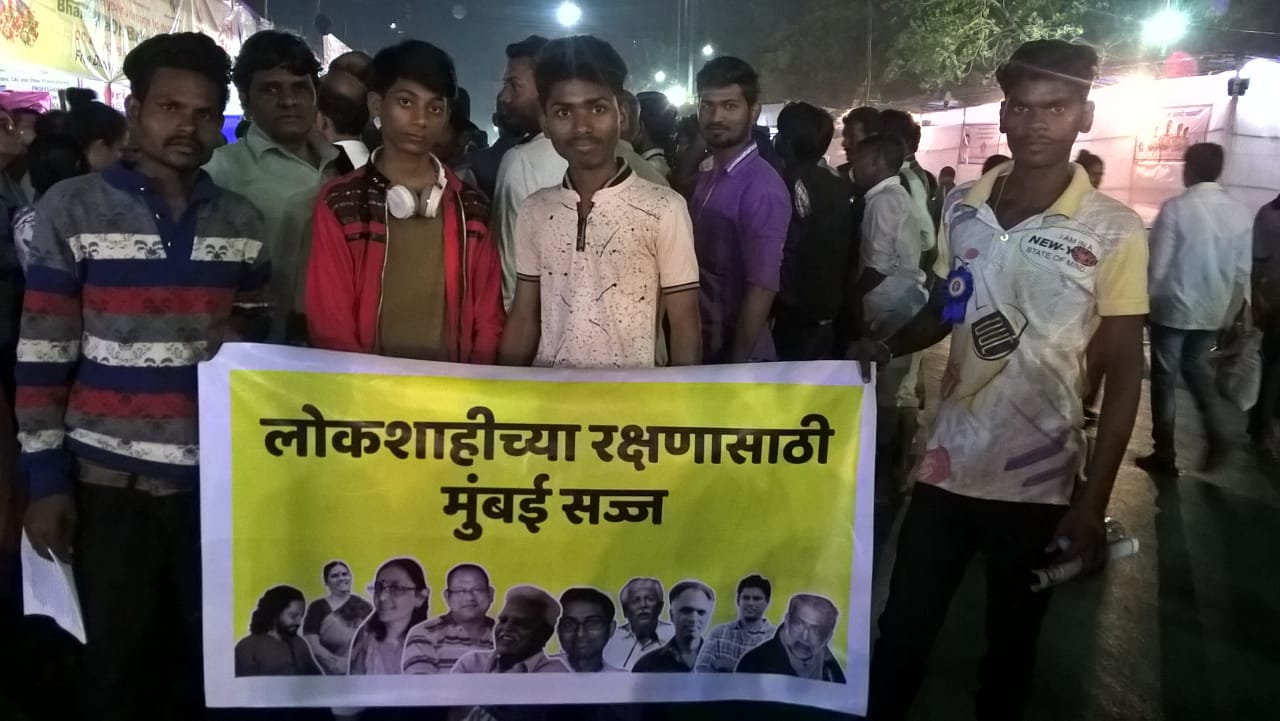 Mumbai Rises to Save Democracy 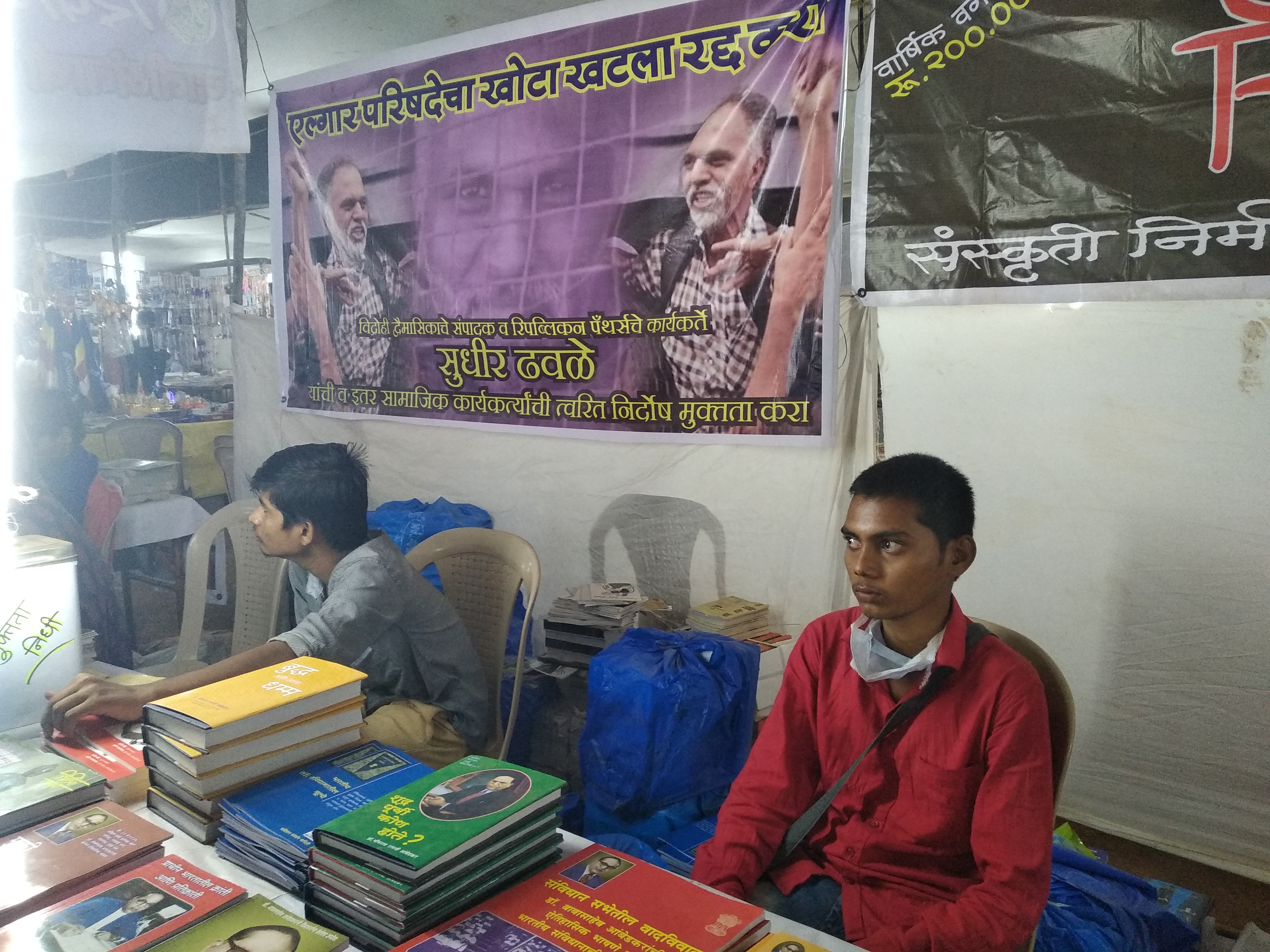 Several cultural organisations sang songs, gave speeches, conducted street plays and raised slogans of annihilation of caste, including Kabir Kala Manch and Samta Kala Manch – Maharashtra’s noted anti-caste lokshahiri movements. Hundreds of publishing outlets, political organisations and NGOs set up stalls criss crossing the grounds. Several doctors put up free medical clinics. Various groups were seen distributing food and water for the visitors. A few students and activists from Mumbai, organised as “Mumbai Rises to Save Democracy” performed songs and distributed pamphlets demanding release of political prisoners arrested in the context of Bhima Koregaon, arrest of Bhide and Ekbote, and repeal of draconian laws such as the Unlawful Activities Prevention Act under which most of these arrests are being done, bypassing Constitutional protection mechanisms. Bombay Suburban Electric Supply Union members had come in protest of the continued incarceration of several of their colleagues, which they claim is based on false grounds. Also present were the brother and comrades of Dalit Panther leader Bhagwat Jadhav, who was killed in the 1974 riots between the Shiv Sena and Dalit Panthers. Several banners demanding the release of Republican Panthers leader Sudhir Dhawale could be seen. Dhawale was one of the organisers of the Bhima Koregaon Elgar Parishad last year. He was arrested along with several other activists earlier this year and charged with the Unlawful Atrocities Prevention Act, on charges of inciting violence through the Elgar Parishad. He has since been in solitary confinement, although the police haven’t still been able to produce credible charges against him or any of the others arrested in the matter. 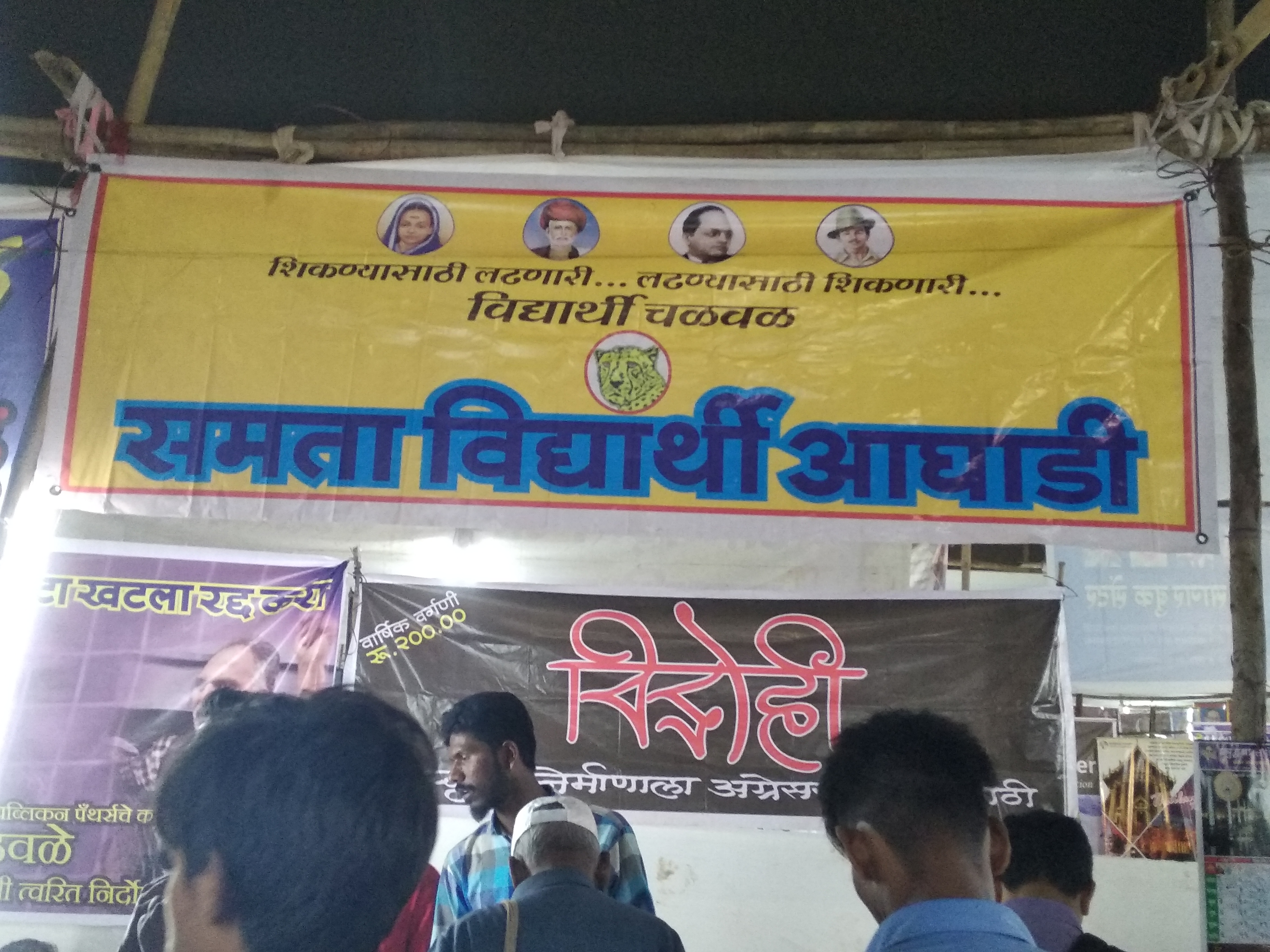 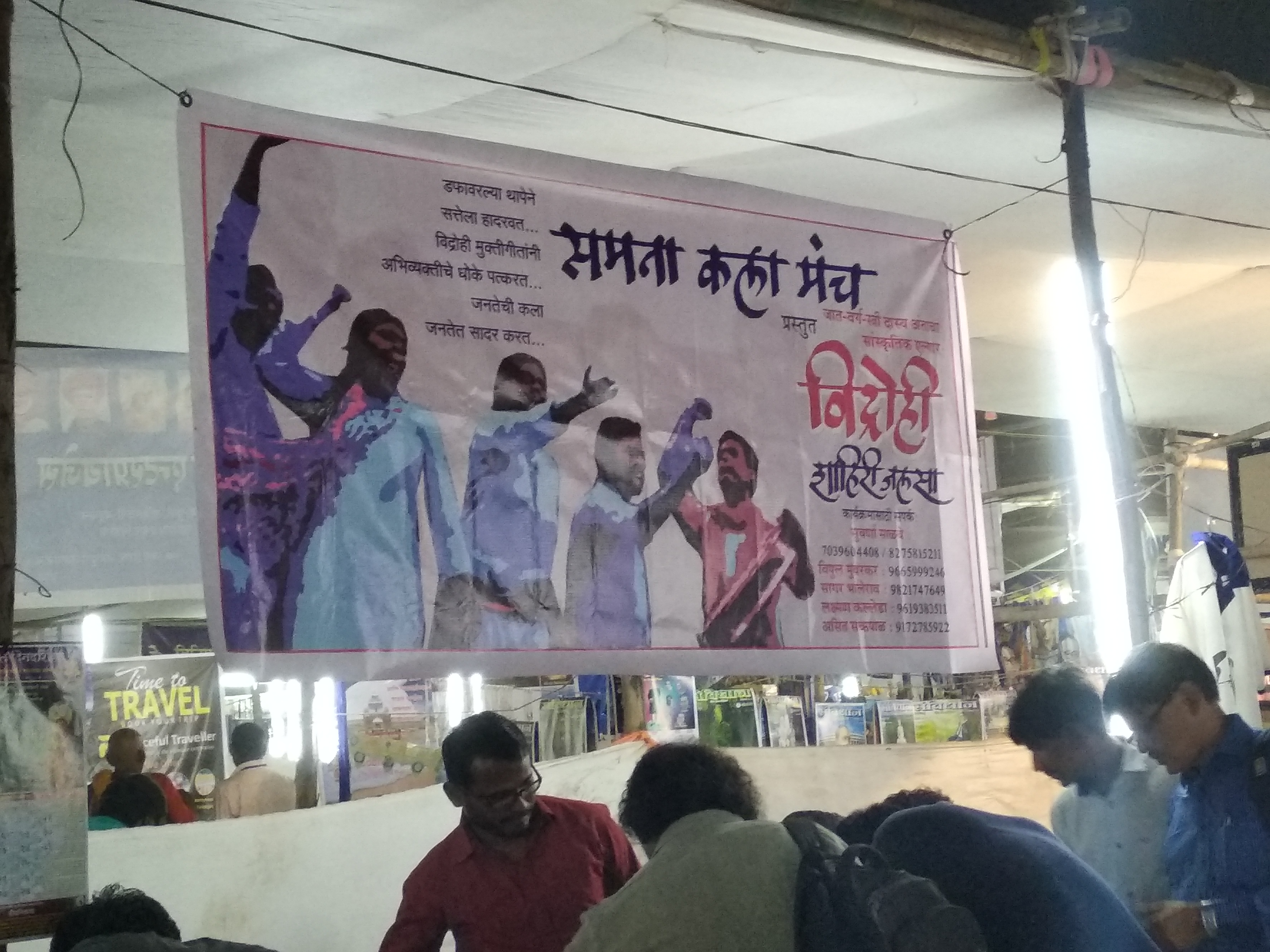 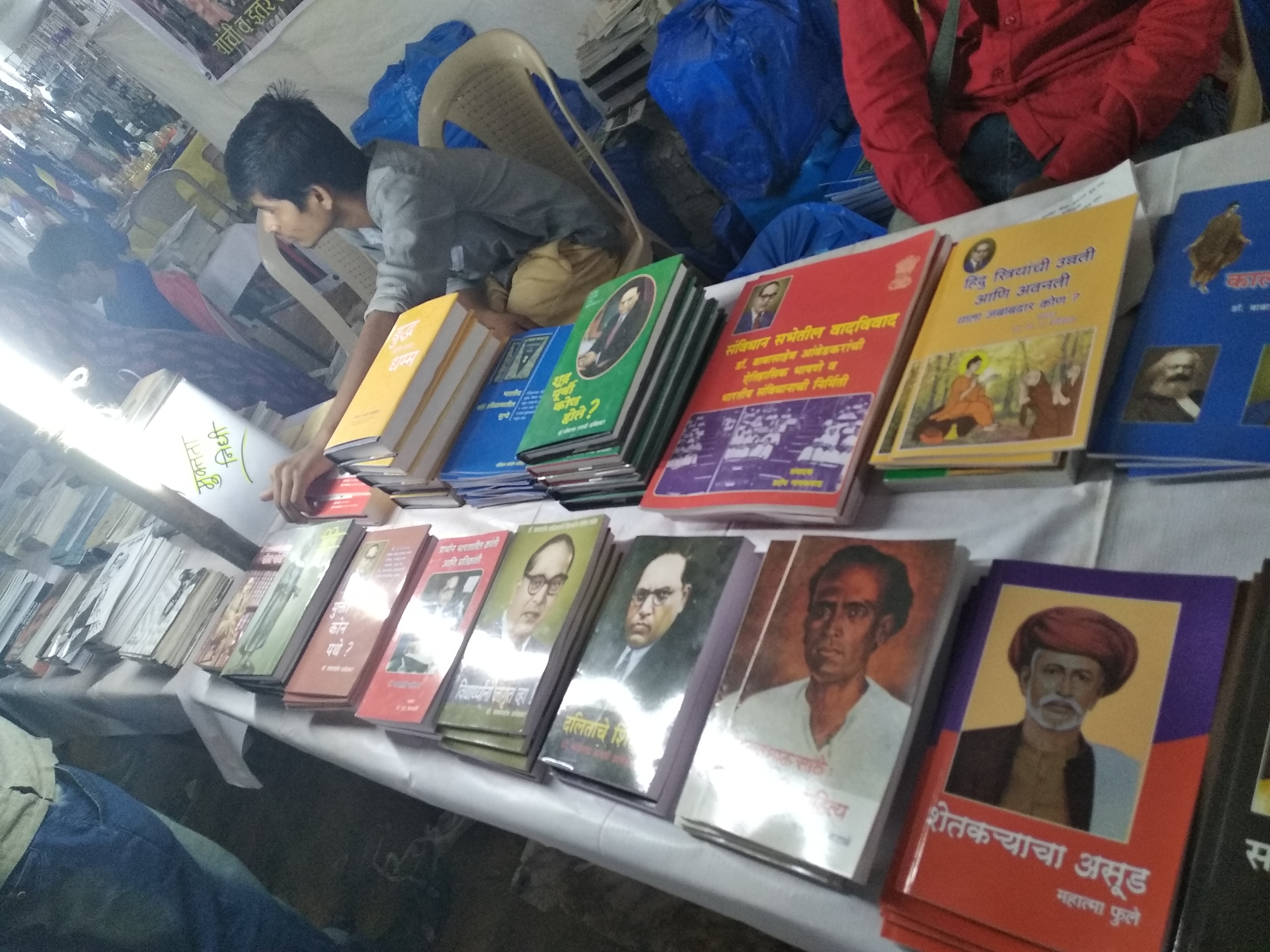 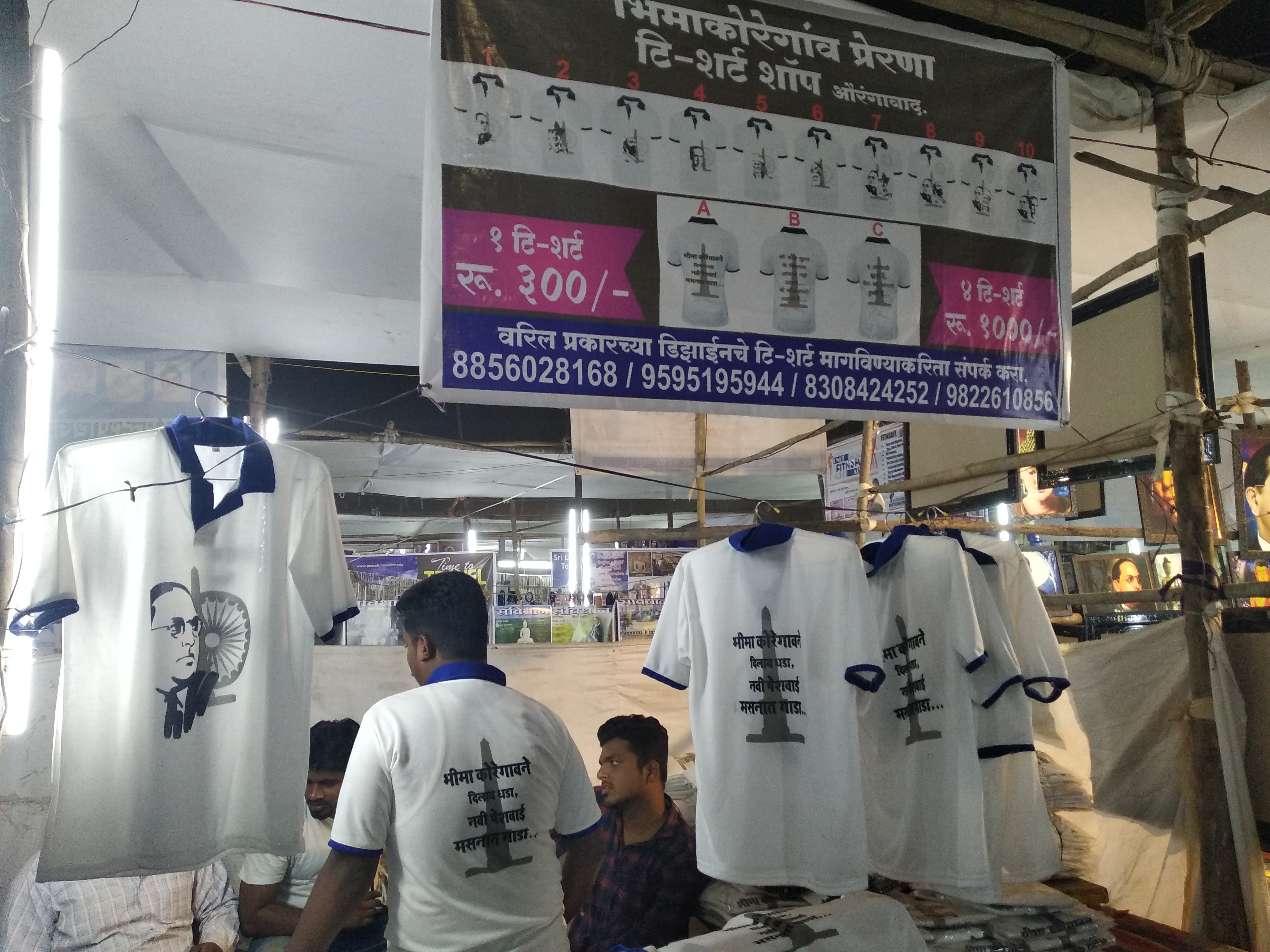 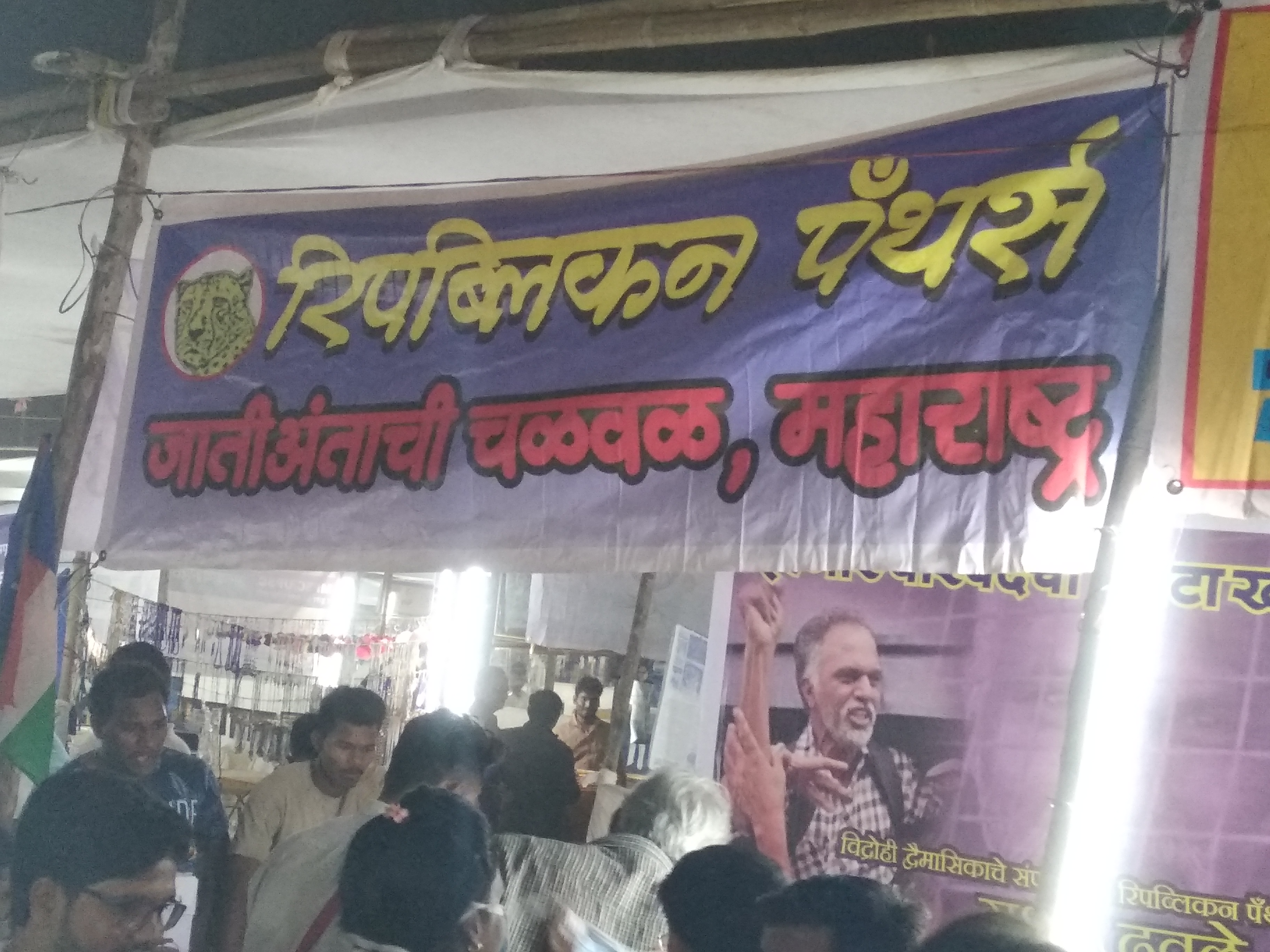 Several political parties had put up giant stages and big tents for their own leaders. The biggest presence clearly was that of the Republican Party of India (Athawale), a long-time ally of the BJP. Sharad Pawar’s Nationalist Congress Party (NCP) was also present. So was the Bahujan Samaj Party. Bhim Army Maharashtra also had a stall. 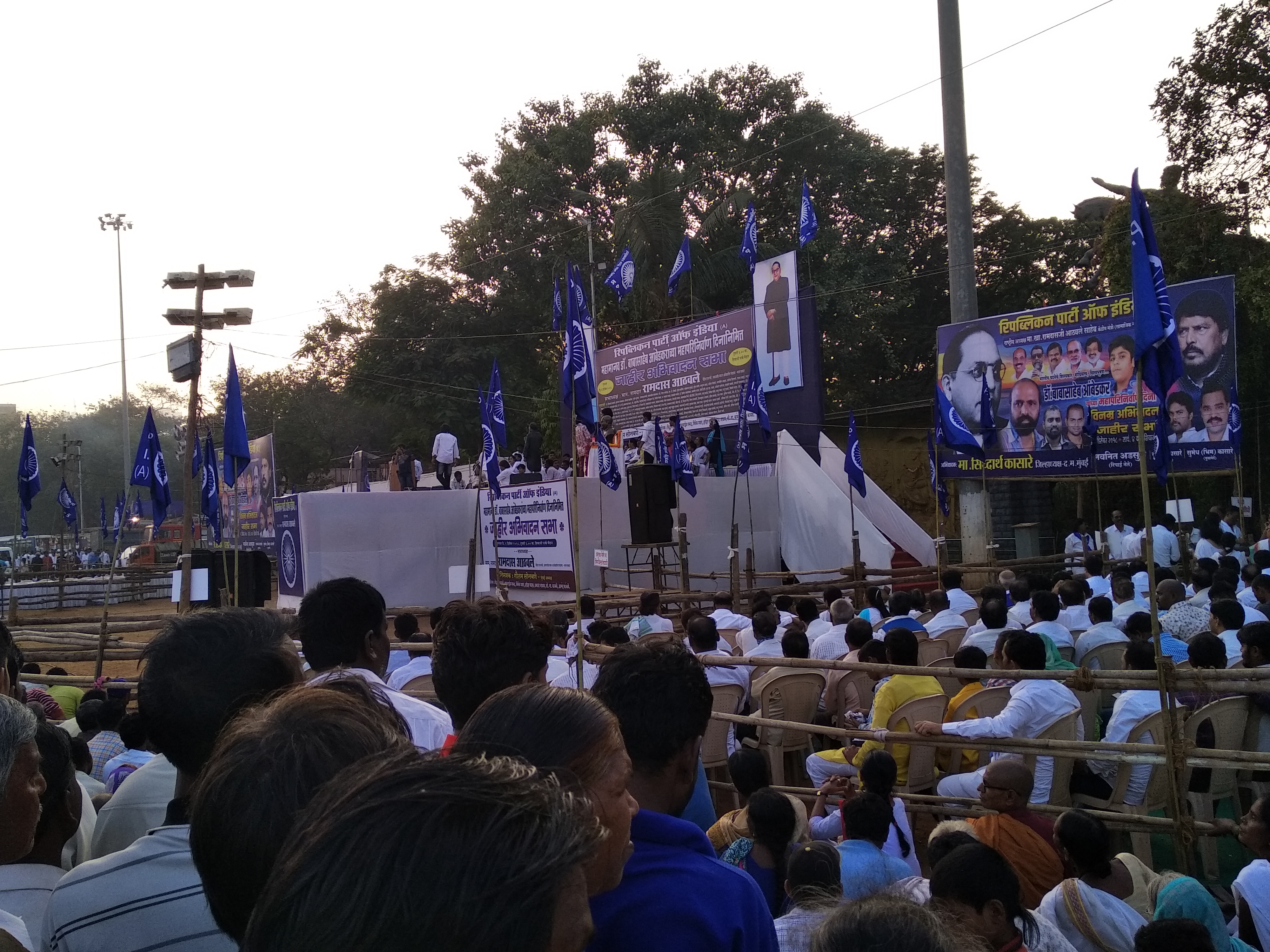 Republican Party of India (Athawale) stage. RPI(A) is one of the biggest organisations involved in the organisation of the annual gathering. 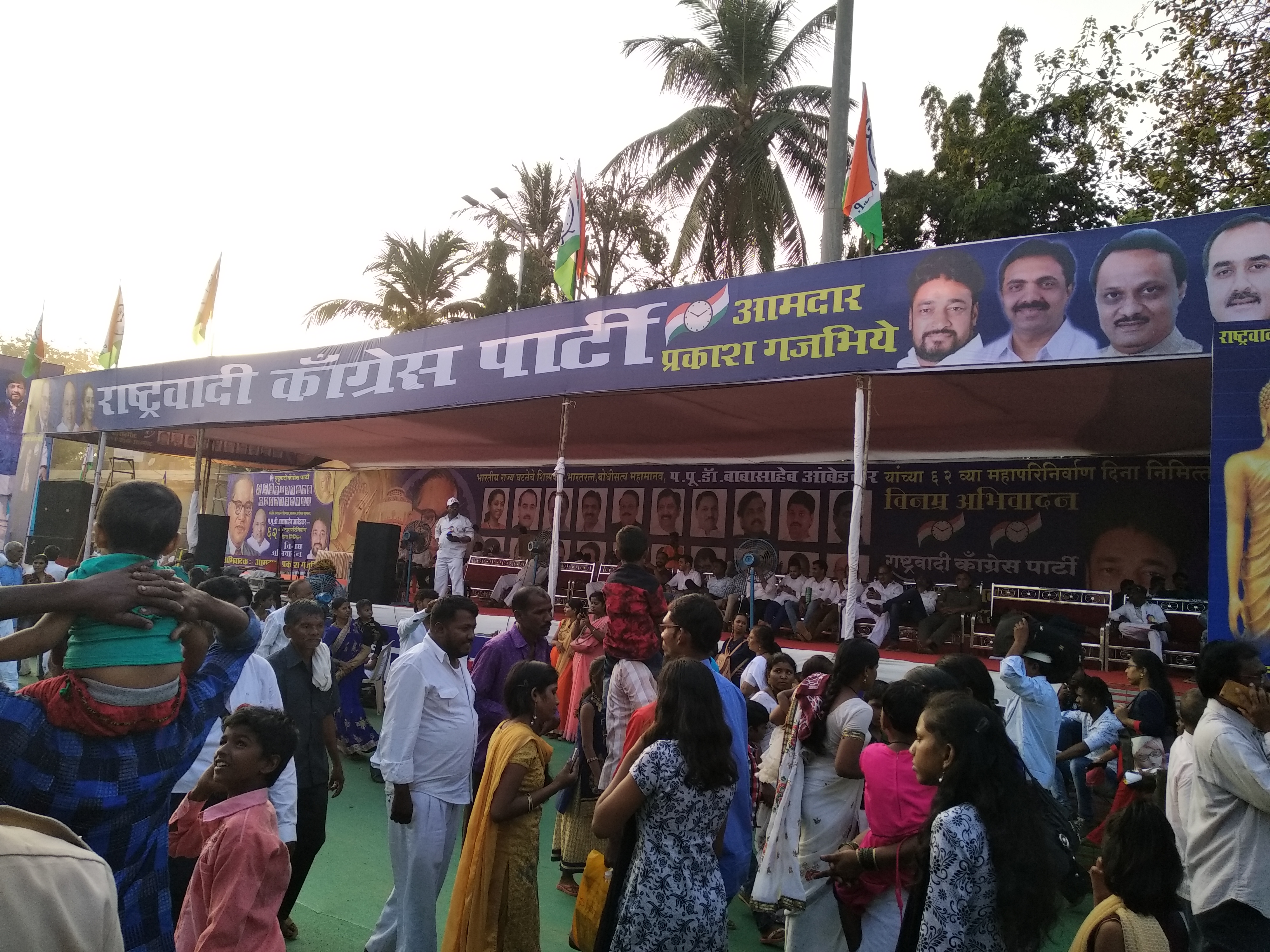 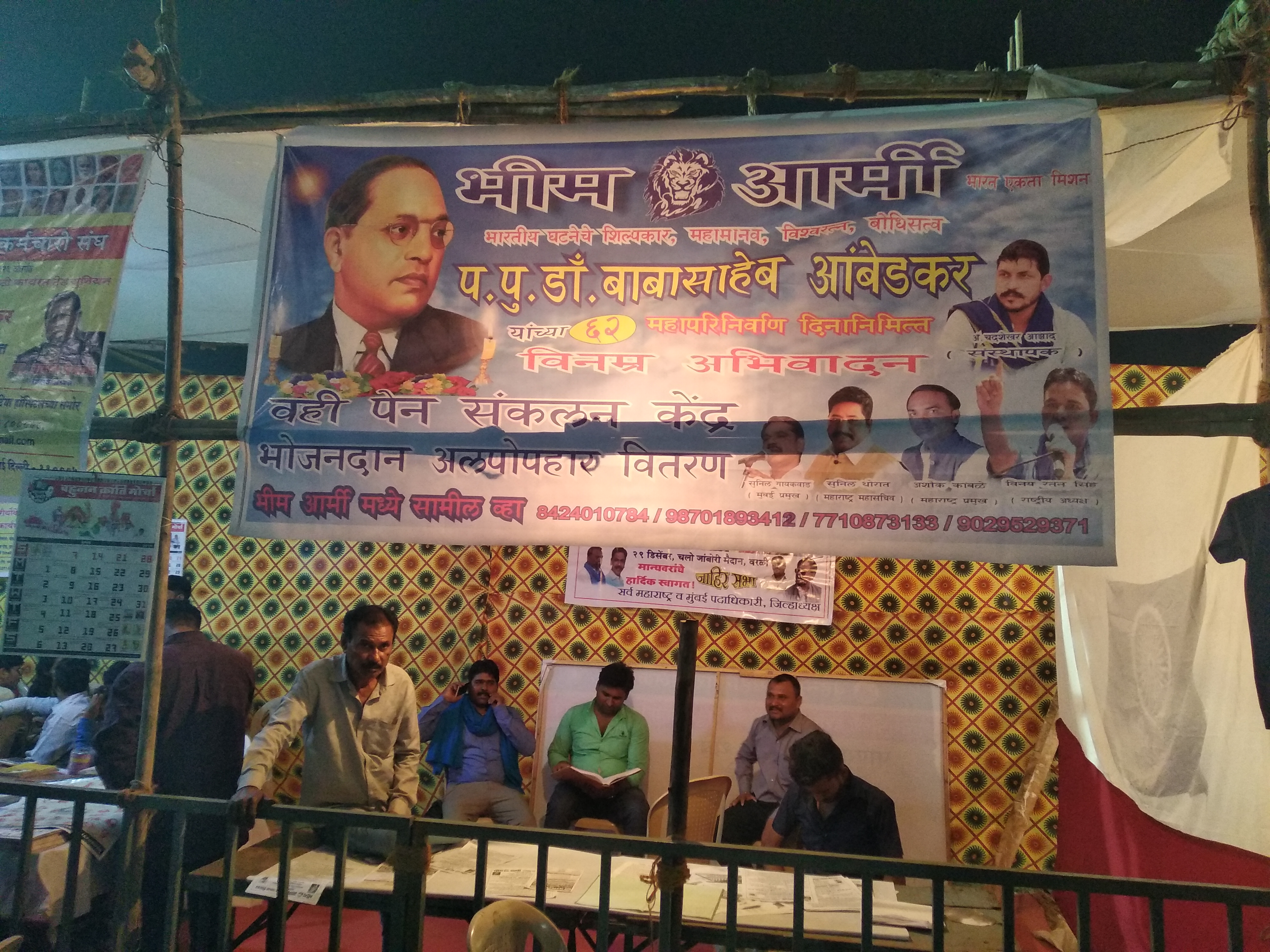 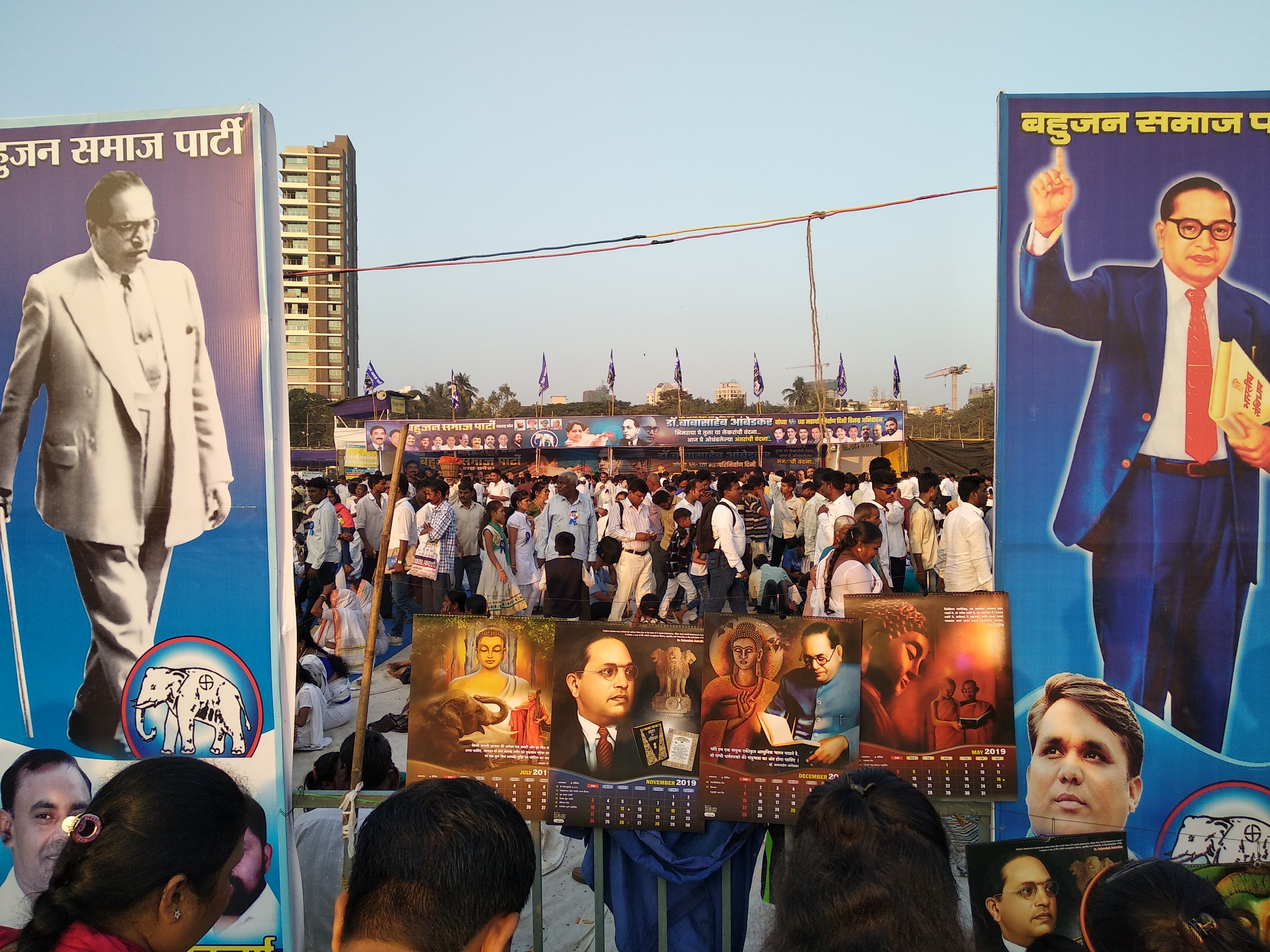 One middle-aged woman, Lalti Devi, comes every year from Uttar Pradesh, taking a 3-day long train journey, only for these couple of days in Chaityabhumi, till she catches her train back. “There are thousands like me who have been coming from faraway places every year for decades,” she said, going on to add, “There are many here today who had come here in 1956 from UP, when Babasaheb died.” In fact, significant parts of the grounds were covered with tents for non-Marathi speaking visitors. Lalti joined in one of the protest street meetings-cum-cultural performance, and then went on to address the entire crowd that had gathered there. She spoke in detail about the political situation in UP, and asked Dalit communities to vote unitedly against fundamentalist forces. She warned people of politics of co-option by upper castes, and of political betrayals within Dalit movements and parties. When asked if she thinks BSP can rebuild itself through the upcoming elections, she said “Only if they realise their blunders, and remove those that we all know are opportunists in the party”.

One woman, hailing from Wardha district, asked this correspondent, “Why should dalits like us answer your questions, after what your people have been doing to us?” 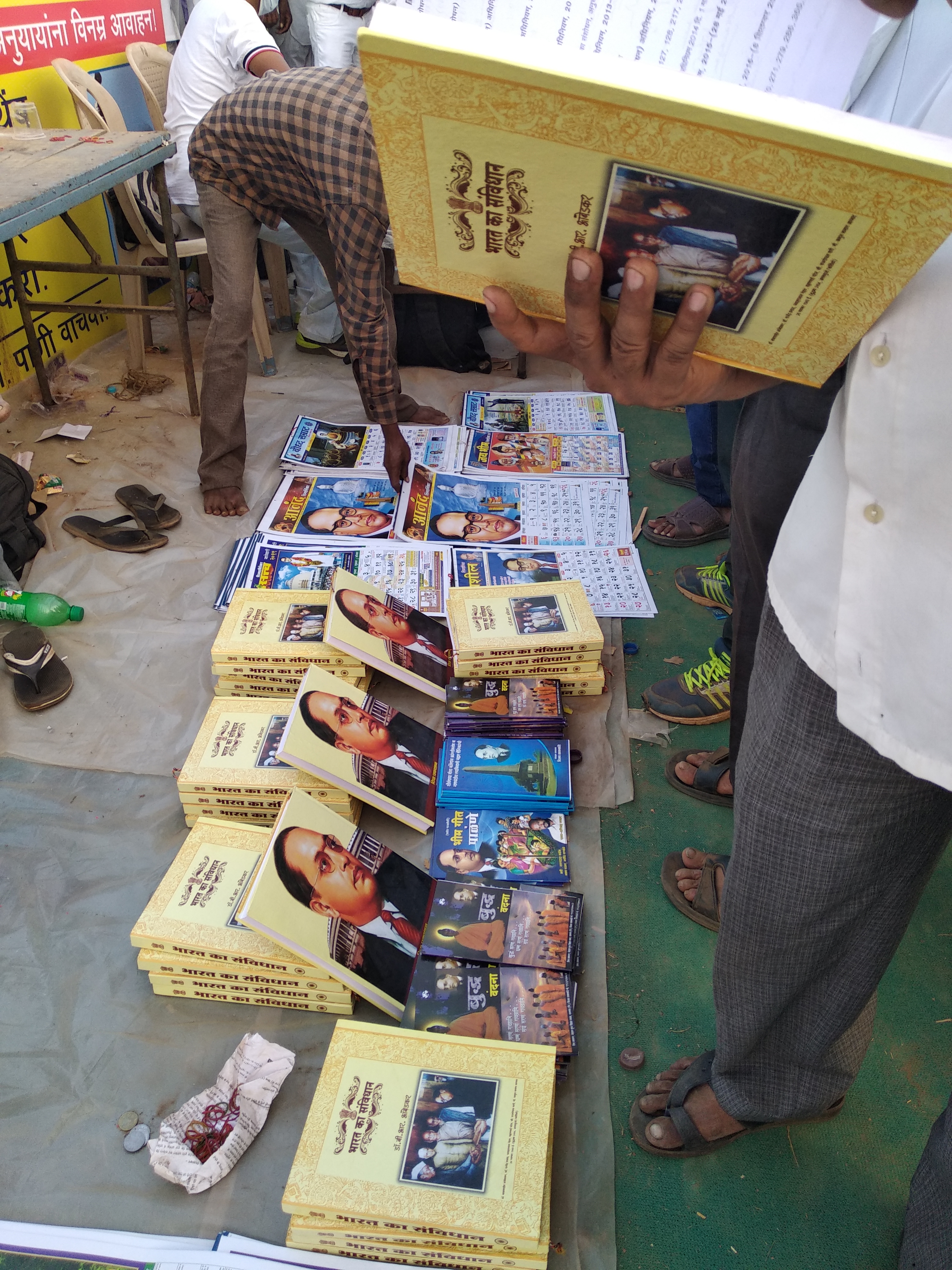 Tens of lakhs of the poorest of people from across the country gathered in the middle of Mumbai city, as they do every year, bringing a busy economic center such as Dadar to a halt for a couple of days. The occasion was to pay homage and gratitude to one of the biggest leaders of this country, who had waged one of the most critical battles of social reform in the history of the nation. And yet this does not make news. Mainstream media, busy with its usual war cries for Temples, spent the entire day’s air-time covering VHP-RSS’s rallies. Chaityabhumi was completely blacked out. Yet again.