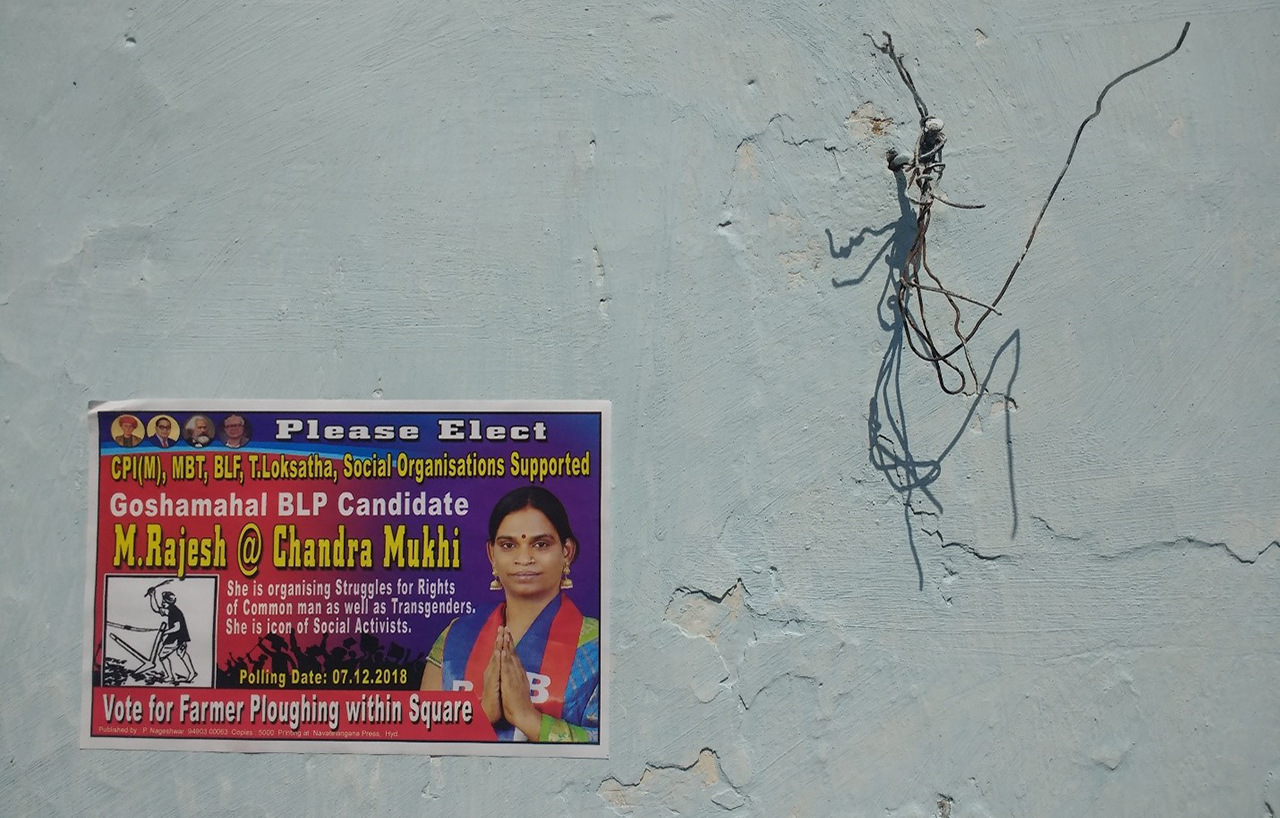 Chandramukhi Muvvala, the first and only transgender candidate contesting the assembly elections in Telangana, as a candidate for the CPIM-led Bahujan Left Front, had started her campaign yesterday, and has gone missing from her Hyderabad home today. Her friends suspect that she has been abducted, and are asking #WhereisChandramukhi ? A GroundXero report.

Chandramukhi Muvvala, 32, made history a week back by becoming the first transwoman candidate to contest assembly elections in the state of Telangana. She is the only transgender candidate among the 3,584 people who have filed nominations in the elections slated for December 7. Running on a ticket from the Communist Party of India (Marxist) led Bahujan Left Front (BLF), from the Goshamahal constituency of Hyderabad, she is up against two senior establishment politicians – the incumbent, Bharatiya Janata Party’s Raja Singh and Congress’ Mukesh Goud. Chandramukhi has been missing since this morning, and CCTV grabs apparently showed four masked men near her house.

An unsigned press release put together by her friends from the transgender community says:

A complaint has been filed in Banjara Hills Police Station near her house. As an activist with the Telangana Hijra Intersex Transgender Samiti, Chandramukhi had strongly protested against atrocities upon members of the transgender and hijra communities, and had always been an outspoken voice at many rallies and public events upholding the self-respect of transgender people. Her decision to contest was also a decision that she felt would help the entire community. We fear for her safety and condemn the lack of safety measures organized for her and for other women and transgender candidates, which acts as a strong force that dissuades transgender persons and women from joining politics. Chandramukhi’s campaign kicked off just one day before she went missing. 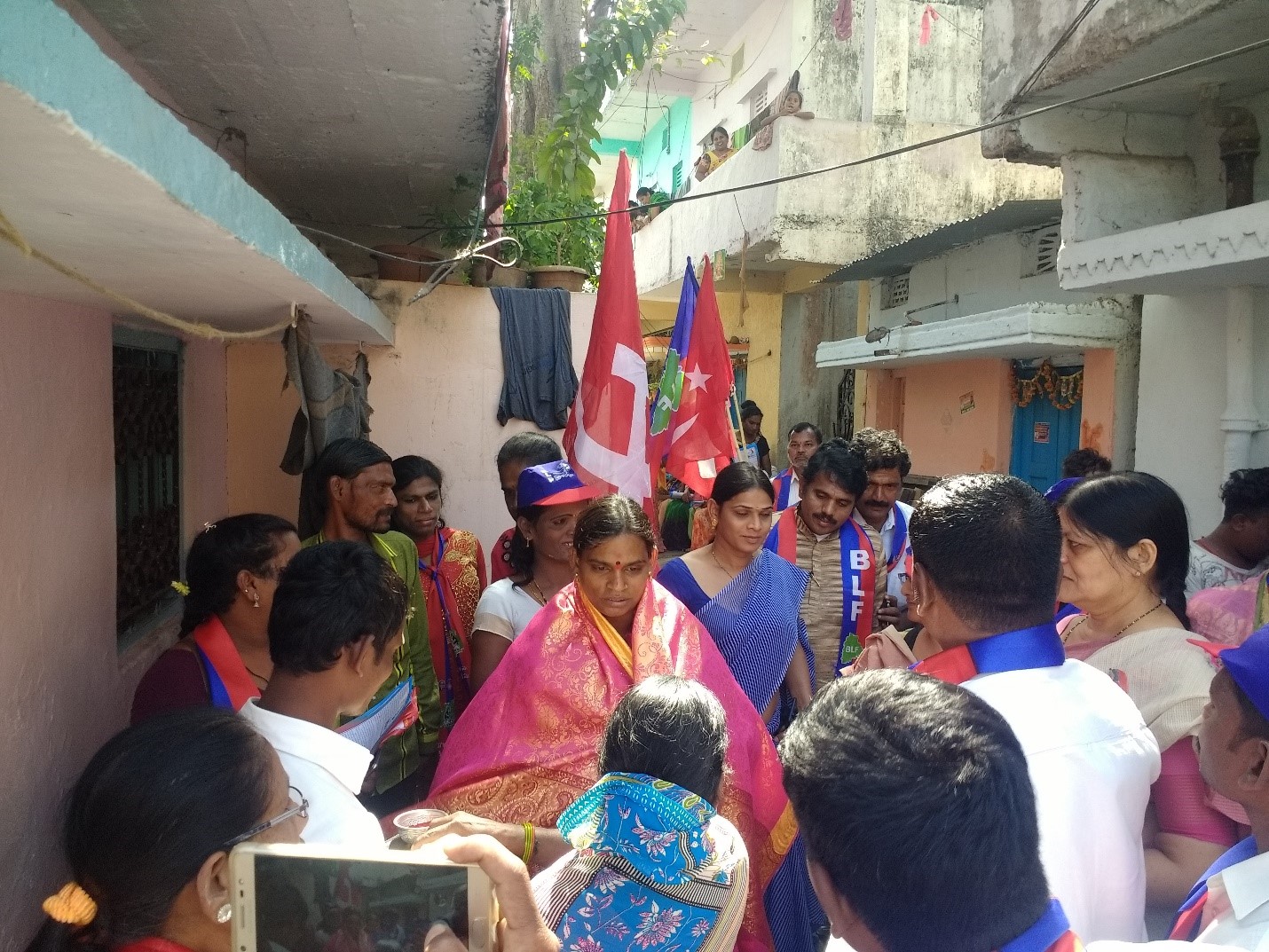 Chandramukhi being felicitated during her campaign

Chandramukhi kicked off her campaign yesterday by canvassing in the dalit and Muslim majority slums of Jumme Raat Bazar, in old city Hyderabad. As she went from door to door, different issues came up in conversation: privatisation of education and lack of good government schools, pensions for the elderly, difficult housing conditions, frequent preventive detention of slum dwellers on flimsy grounds, lack of healthcare facilities and good water supplies. The campaign team included members from CPI-M, All India Democratic Women’s Association and young members of the transgender community – many of them sex workers, many recent migrants to the city. This campaign itself marks an important intervention in a city that has been witnessing major incidents of violence and complete government apathy towards the implementation of the NALSA Supreme Court judgment for transgender people.

Chandramukhi is one of the leading activists of the Telangana Hijra Intersex Transgender Samiti – an organisation that has been actively working on issues of gender violence in the state for more than 4 years now. She was also an actor and became the first transgender TV anchor in Telangana when she hosted a show on 99TV. She has also acted in multiple Telugu movies, and was recently hosting a show on a YouTube channel called Transvision. Here is the link to a TransVision episode on Trans Remembrance Day, hosted by Chandramukhi:

Earlier this year a mob attacked and killed one person and injured others, following the circulation of a fake Whatsapp video. At that time Chandramukhi had given a statement saying: “Chandraiah may have not been a transperson, as anyone in the State, who identifies him/her self as a transperson registers with Telangana Hijra Samithi. This person was not registered with us … However, … Chandraiah was killed because of wearing a saree … it could have happened to any of [us]. It could have happened to me. They are individuals who resorted to begging as per reports. How can someone be killed for something like that?” Indeed, she is herself no stranger to violent attacks – even this July she sustained serious injuries after being hit with a beer bottle on her head. 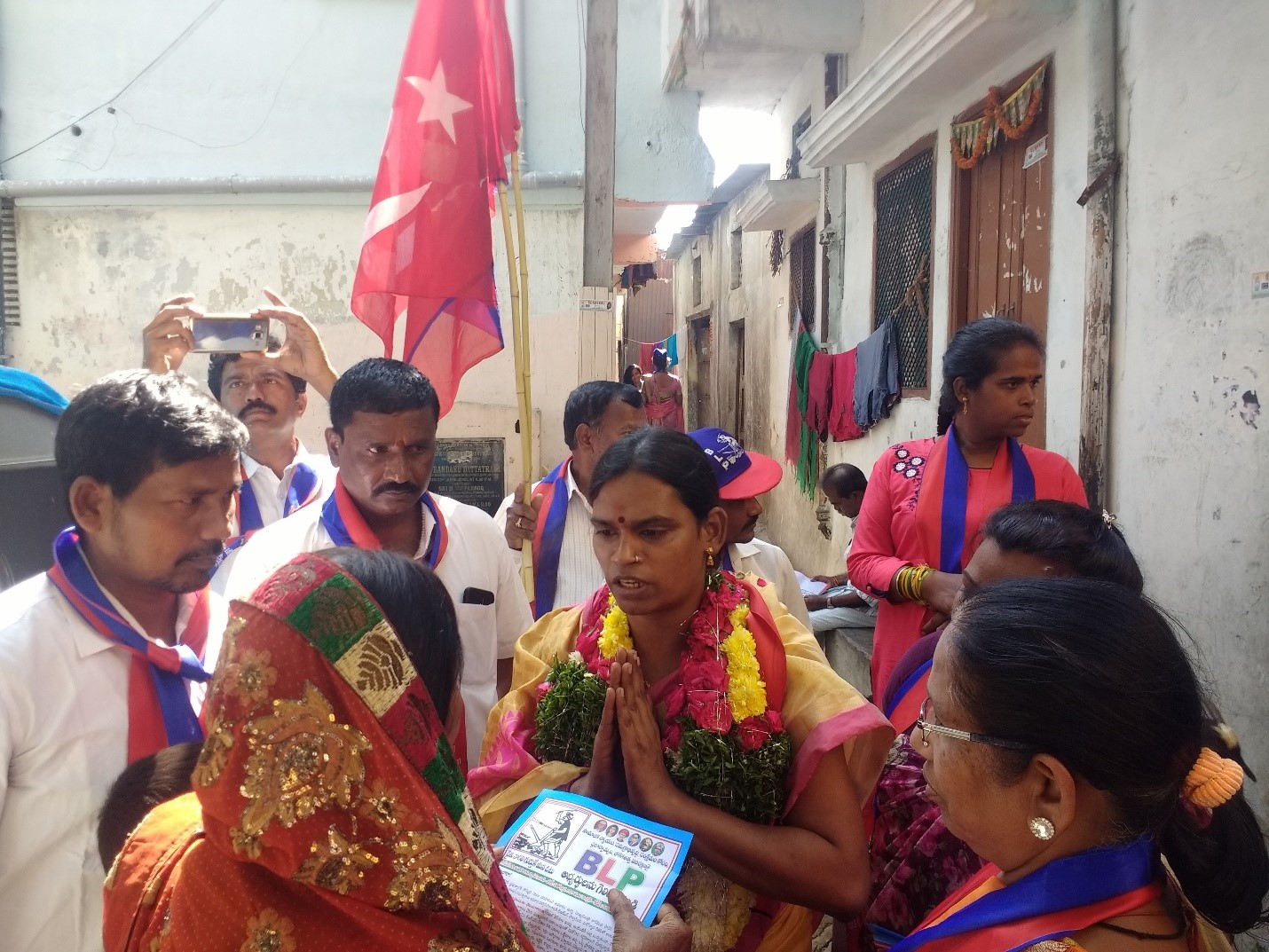 Chandramukhi on the campaign trail

Venkat, a man accused of raping and killing transwomen over the last 8 years has been out on bail recently after being convicted for the murder of Pravallika, a transwoman whom he killed in January 2015. After coming out on bail, he has again begun attacking the transgender community and there has been a pervasive sense of fear. Chandramukhi has organized and fought against his reign of terror, and said last month, that “the reason Venkat victimized transwomen was that the trans community is not well-represented in Telangana. She added that Venkat’s gang “is well feared by the trans community.”

According to the police, 4 teams have begun search operations for her. However the First Information Report that has been filed is very sparse on details. Chandramukhi’s  mother Anithammaa plans to approach the Hyderabad High Court and file a habeas corpus petition in the morning. Parallely, her political party, the Bahujan Left Party plans to submit a copy of the FIR and file a complaint with the Election Commission. A press meet has been called in the morning. 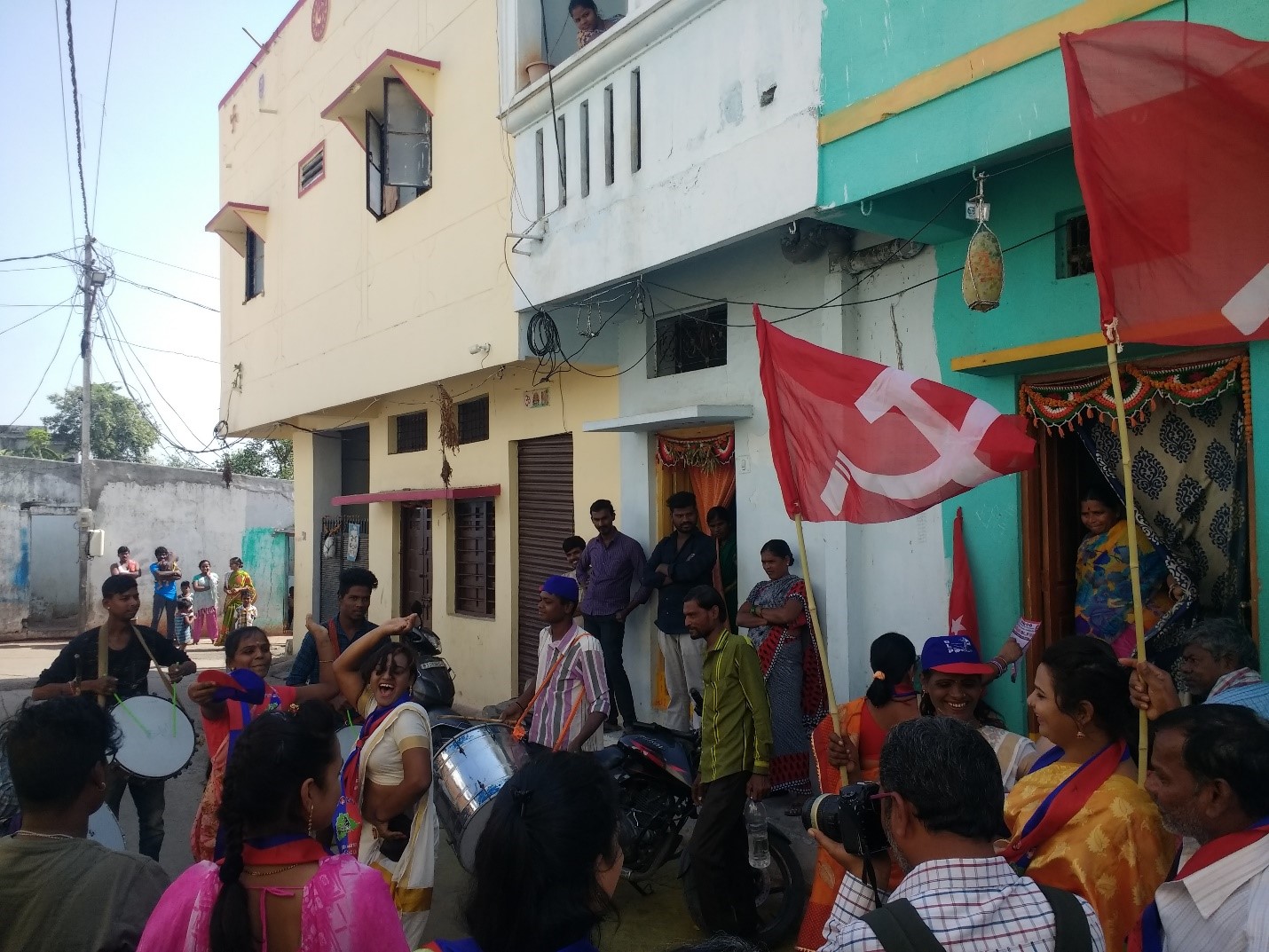 Members of Chandramukhi’s team frequently broke out into dance, as the campaign wended its way

Cover Photo: A sticker pasted by Chandramukhi’s campaign on a wall in Jumme Raat Bazaar; all photos by GroundXero.