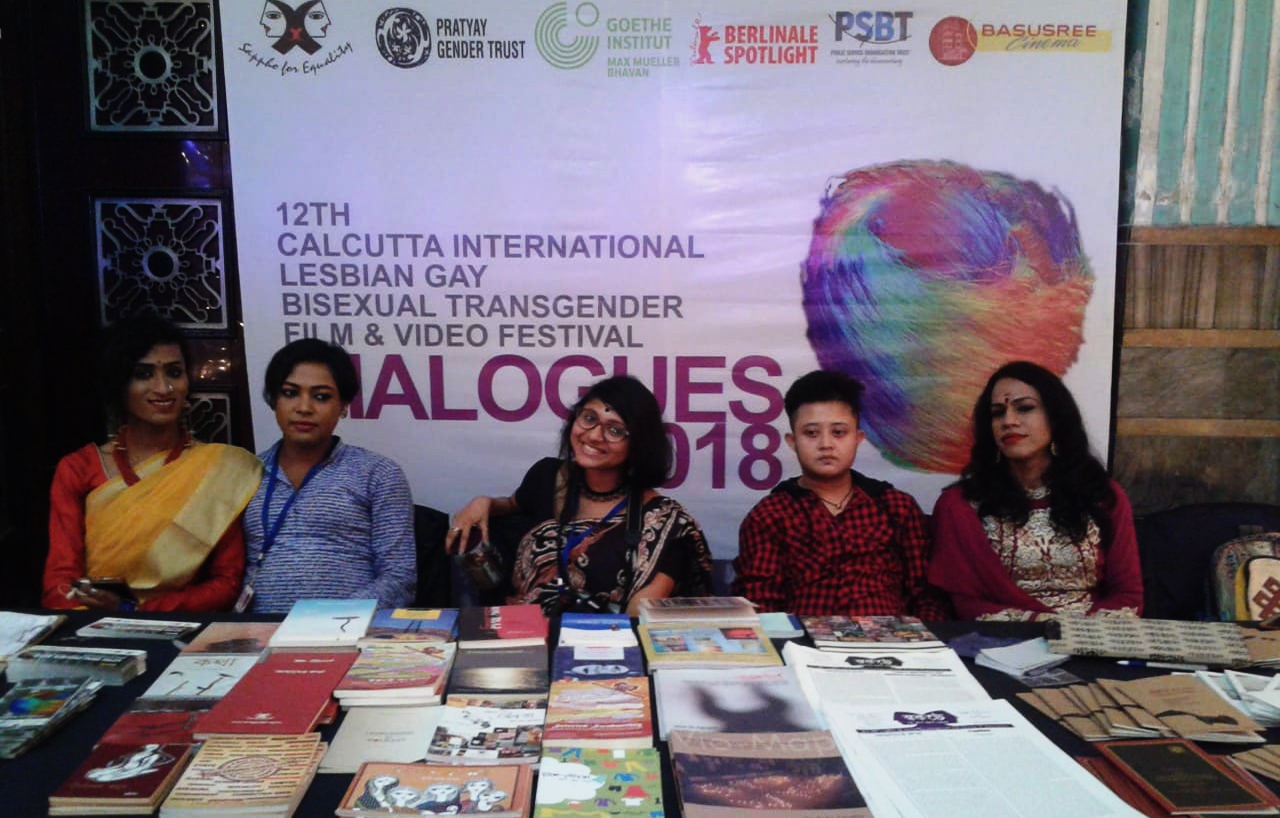 DIALOGUES : A Film Festival of Pride and Politics

Kolkata International LGBT Film & Video Festival, which is being successfully held since last 12 years, not only brings people of different gender and sexual identity together but also highlights and talks about the rights of LGBTQ community, while presenting to the Kolkata audience films dealing with the issues of the LGBTQ community in different Indian languages and from different parts of the world.

This year’s DIALOGUES was held during 22-25th Novemver. Short films from Berlinale Spotlight and short films and documentaries produced by PSBT were screened. The opening film was Reaching for the Moon based on the relationship of American poet Elizabeth Bishop & Brazilian architect Lota de Macedo Soares. Films like Looking for Langston, Born in Flames, Khejdi, Pixelia, Snapshots from a Family Album and many other films were screened. This year’s special focus was on films from the South of India. The closing film was a Tamil thriller Pariyerum Perumal.

DIALOGUES is the oldest LGBTQ film festival in India. It is being organized by Sappho for Equality, Pratyay Gender Trust & Goethe-Institut/Max Mueller Bhavan for the past 12 years. Till its 10th year it was organized in the premises of Max Mueller Bhavan, Kolkata. From last year the festival venue has shifted to one of the few remaining single screen cinema halls in Kolkata: Basusree Cinema. This hall is historically known, having screened the premier show of Satyajit Ray’s Pather Panchali as well as that of Ritwik Ghatak’s Ajantrik.

The 4-day festival presented a wide range of feature films, documentaries, short films and short documentaries by renowned directors as well as newcomers. The aim is to not only generate a sense of togetherness within the community but also to sensitize a larger audience about the LGBTQ community, to portray its issues and break the social taboos. From this point of view, organizing the festival in a mainstream cinema hall is an important step forward. The curious look of the pedestrians, people inside the passing public vehicles, the interested looks of the people stopping to see the posters, banners and checking the schedule of the festival, many entering the hall and trying to gather more information – all are evidences of people becoming more aware of not only the film festival but also the existence of LGBTQ community and its varied issues. 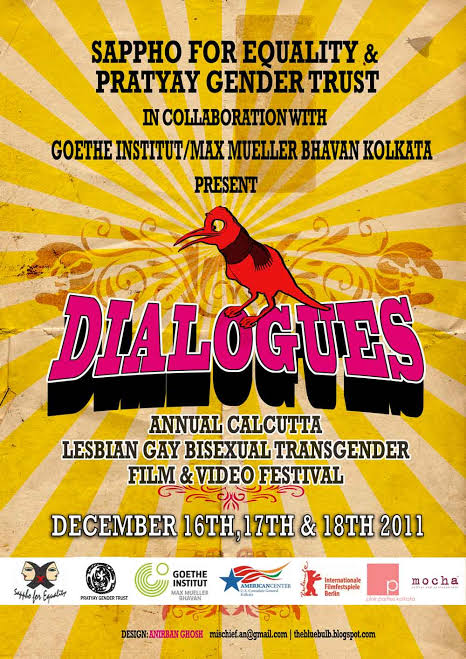 Theatre practitioner Sanjay Bhowmik, an audience member, says that it is his first year in DIALOGUES, but he finds it all the more important today to organize such a festival as cinema is a strong medium, which apart from being entertaining can also educate and raise awareness among the mass. According to Srabanti Bhattacharya, performer, “DIALOGUES is a very important festival. I’m attending it from last year. This is a festival which should be attended by more people. It’s good that people from various backgrounds are coming forward, collecting passes and watching the movies because if it is restricted within the community members and activists, then the purpose of creating awareness among the common people cannot be achieved. It will be great if apart from organizing this annual film fest in Kolkata, the organizers think of taking this to villages, suburbs and localities to engage with more people.”

But for someone like Mrityunjoy Roy (name changed), an IT professional and a person who identifies himself as gay, DIALOGUES is a place where he can meet people like himself, talk freely, share views and also exchange thoughts and ideas. Of course watching some good movies are added gains. When asked “Have you come out with your identity?”, he replies, “In my professional space yes, but not in my personal life. My parents are in their 70s. I know they will not be able to accept it at this age and I don’t want to bother them.” This reminds me of what Minakshi Sanyal from Sappho for Equality said: “Decriminalization of homosexuality is not enough. Now the movement should be for civil rights. Now is not the time to create boxes, the whole community has to come together. Also there is no point if we don’t collaborate with other right movements in the present political scenario of our country.”

Anindya Hajra, the founder member of Pratyaya Gender Trust, rightly points out, when asked why a film festival like DIALOGUES is important today, “Borders are always crowded. If one were to factor marginalization, sexual orientation or gender identity cannot be subtracted from the structural oppression of caste discrimination or the climate of divisive communal politics, which feed another narrative of violence on the marginalized. That’s the connect. That’s where an intersectional film festival like DIALOGUES, which looks at these intersecting circles of oppression in order to build a common language of resistance, becomes significant.”

Samarpan Maity feels, this festival is important because “Such festivals connect the links rather than creating divisions between communities represented under the increasingly divisive LGBTQ umbrella. LGBTQ film festivals are important because they bring to audiences the films that are otherwise pushed out of the multiplexes by million dollar ‘dhamaka’ mainstream movies. In our country we hardly see LGBTQ themed film festivals being screened in multiplexes. Such festivals offer a different kind of pride celebration where queer people can come together, watch their stories on screen, interact with each other and get inspired seeing their own struggles and happiness.” 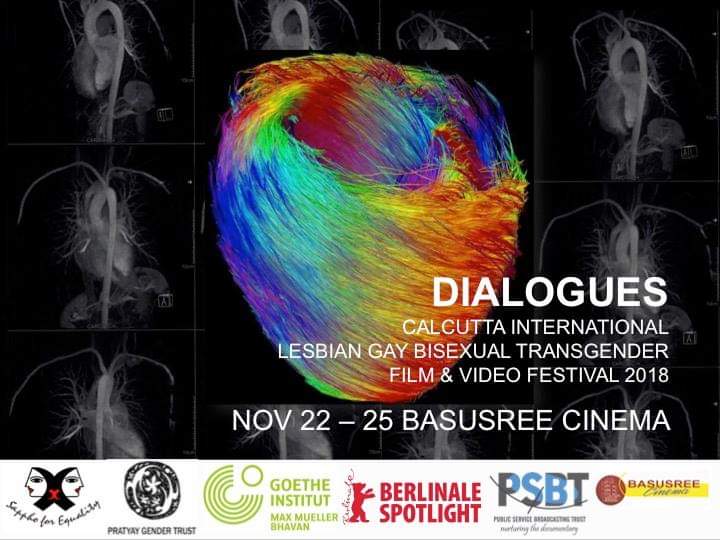 DIALOGUES is important for another reason, namely, it is being organized in a single screen heritage cinema hall, as a statement against the multiplex culture. Sourav Bose, one of the owners of Basusree cinema says, “When the proposal to hold the festival came to us, I accepted because this is a very prestigious film festival and I was glad to collaborate with them. It also benefited Basusree. As we have rejected the multiplex culture, this kind of festivals will make us more visible to and connect with the new generation. Basusree has a glorious past. Youngsters who are not aware of it today will be able to know about that too. Partnering with such an important film festival will help revival of Basusree. But the first priority is to spread awareness and break the cliches about the LGBTQ community. During the festival people can watch movies, directly interact with the community and get answers to their questions.” Bose had to face his share of criticism last year from few people close to him (though his family was supportive) for organizing this festival due to taboos still present in the society regarding the LGBTQ community.

The four days of the festival provided a platform of joyous interactions between the members of the community, other activists and the general audience, watching together so many important films and creating awareness in the process. DIALOGUES remains a festival where cinema becomes voice of the marginalized. It keeps reminding us that ‘Personal is Political’.

Sudarshana is an independent journalist and documentary film-maker.