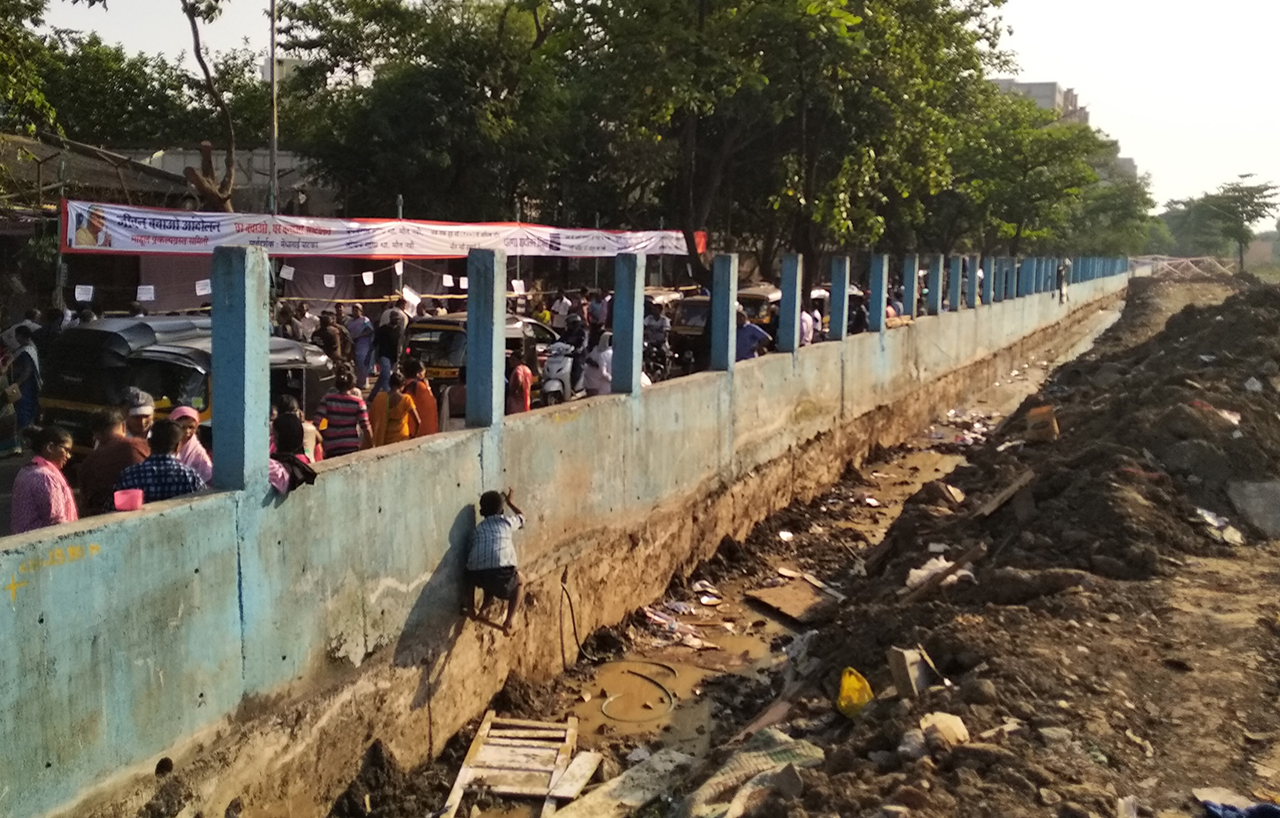 The dharna of residents of Mahul in Mumbai, demanding proper rehabilitation of all the evicted families entered the 8th day. They are currently occupying the footpath in Vidyavihar opposite to the demolished jhoparpatti from where they were originally evicted and forcefully dumped into Mahul which they describe as “Mumbai’s toxic hell”.  A report by GroundXero from the protest site.

Today, as the Mahul residents’ dharna occupying the footpath opposite Tansa pipeline in Vidyavihar entered the 8th day, Rekha Ghadge – one of the leaders of the Jevaan Bachao Andolan of Mahul residents – and a few other protestors including men and women, went and showed black placards saying “Chief Minister Save Our Life” to CM Devendra Fadnavis, at a conference at Chembur. They were immediately detained by the Maharashtra police, and taken to the Chembur police station. This comes as the Chief Minister continues to ignore the demands of the evicted jhoparpatti residents, currently dumped at the Mahul chemical industrial area, for proper rehabilitation. From before the Municipality elections conducted last year, the CM had promised fair rehabilitation to everyone evicted because of the basti demolitions along the Tansa water pipeline. “I have 1700 keys in my pocket”, he had claimed from the rallies, referring to the flats in the city he claimed to have arranged for the evicted families. But he shifted his stance immediately after the elections were over, and has since gone to the lengths of violating the orders and directions of the High Court, the National Green Tribunal, and even requests from some of his own cabinet ministers, in forcing the evicted families to put up in what is called “Mumbai’s toxic hell”. The detained protestors were released later in the day by the police, after the CM’s rally got over. 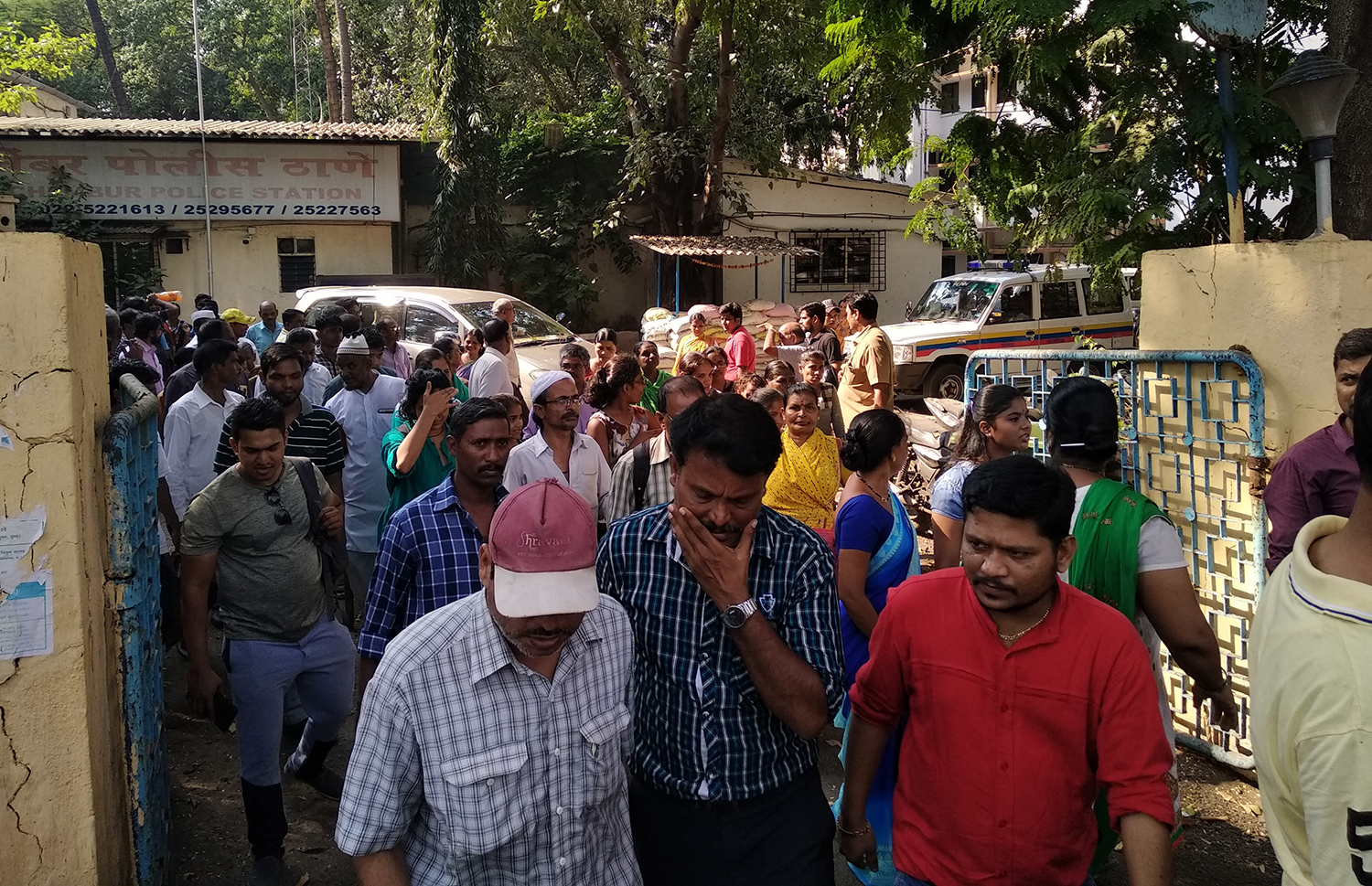 Protesters after being released by the Chembur police

Last Sunday, hundreds of residents from Mahul, including old, critically sick people, and infants, put up a dharna tent on the footpath opposite to their erstwhile jhoparpatti in Vidyavihar area of Mumbai, in a bid to “reclaim” their land and home, from which they have been displaced illegally. On the very next day, 29th October, after the dharna tent was brought down by the police force, and few of the protesters were detained, the agitated families took out a rally to the Tilaknagar PS near Kurla (where the detained persons had been taken to), and staged a day long dharna inside the police station, demanding proper homes. By the end of the day, the Shiv Sena youth wing leader, Aditya Thackerey met with the protestors at his office, but had only verbal promises to offer. The protestors went back to the dharna site.

Because of ongoing pressure from the residents, on October 30, Chairman of Maharashtra Housing and Area Development Authority (MHADA) and Shiv Sena leader Uday Samant, finally agreed to give 300 tenement to the affected citizens for now, “in the first phase”. This is the first time that anyone from the State bureaucracy officially accepted that the Mahul residents need to be rehabilitated. The protestors, while welcoming the first signs of the authorities responding to the pressure, however alleged that there are enough number of empty flats in various Slum Rehabilitation Apartments across the city to accommodate each of the 5500 families that have been pushed into Mahul. Every protestor that GX spoke with, said that no one will accept a flat unless every affected family is allocated one. They decided to continue the dharna.

The Housing Minister of Maharashtra Mr. Prakash Mehta (BJP) had promised to meet and talk with the protestors by 5 pm on November 1st. As usual, the Minister failed to show up, and the agitated residents of Mahul, after waiting till the evening for him, went and occupied his office at Ghatkopar, demanding that he must come and meet with them. Mr. Mehta has been the elected representative of these citizens for several terms now, and he was one of the leaders who had initially ensured his constituents that they won’t have to shift to Mahul, even if their basti is demolished. For the first time this time, he confirmed he has no such intentions, saying that he can’t do anything in this matter. After almost 4 hours of occupation of his office by the residents, the Minister who did not show up ultimately, called in to talk to them through the phone of a local BJP volunteer. “Instead of coming forward to address us, [the Minister] instructed his volunteers sitting in his office to escape through the back door of the occupied office”, alleged the protestors. It is only when the protesting women caught one of the volunteers running away from the back door of the office that the Minister spoke to the residents through the phone of this gheraoed volunteer, only to say that he can’t save the lives of residents living in Mahul. After this the police forced the agitators back to the dharna site in Vidyavihar. Meanwhile, a pollution-affected 6 year old girl sitting at the protest had a mild attack of paralysis, three days back. 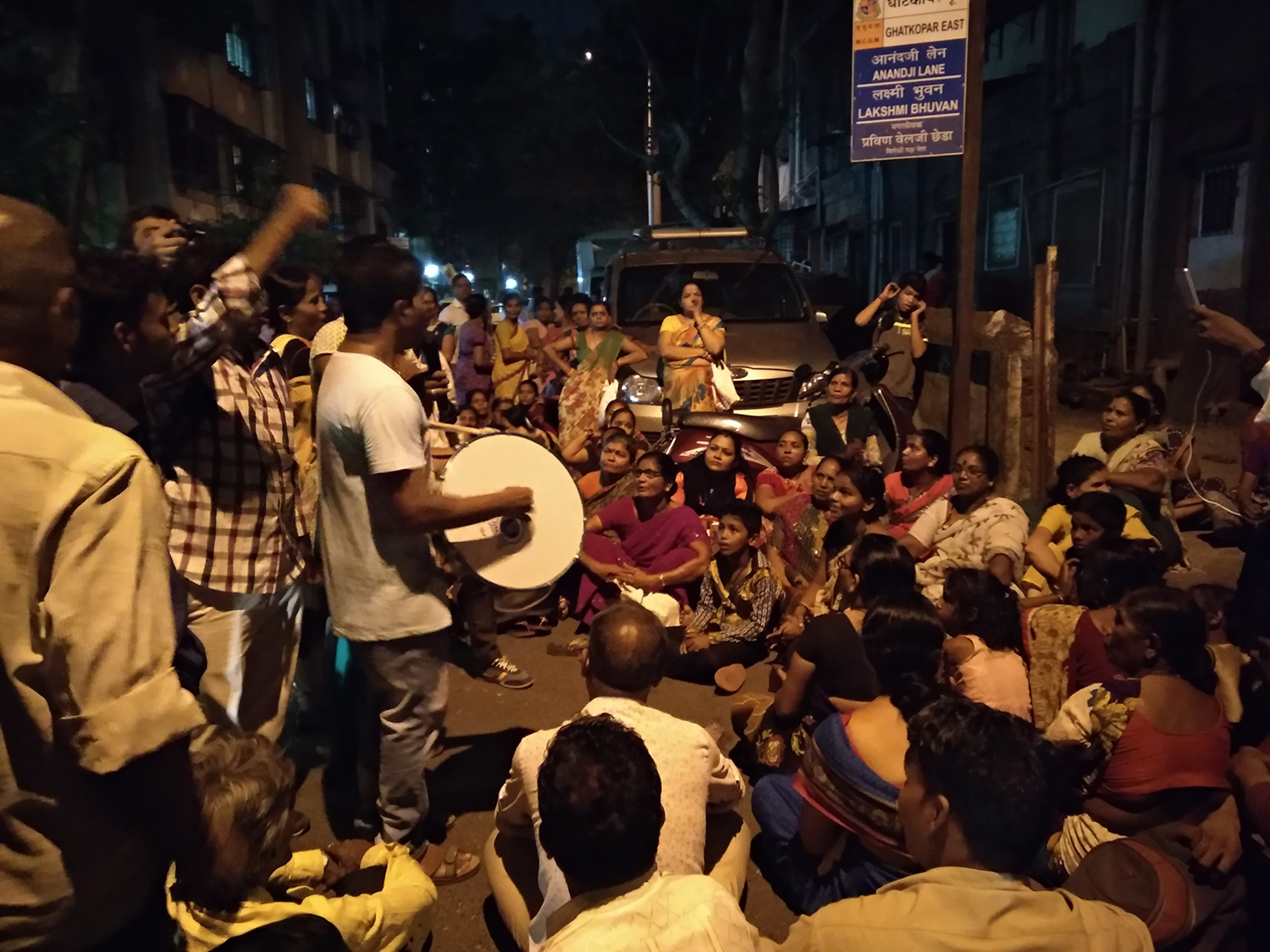 Mahul residents, with Medha Patkar, meet with Chairman of MHADA

The Bombay High Court had directed the Govt. of Maharashtra to relocate residents of Mahul elsewhere as the lives of these residents are in danger given the high level of pollution in the area. 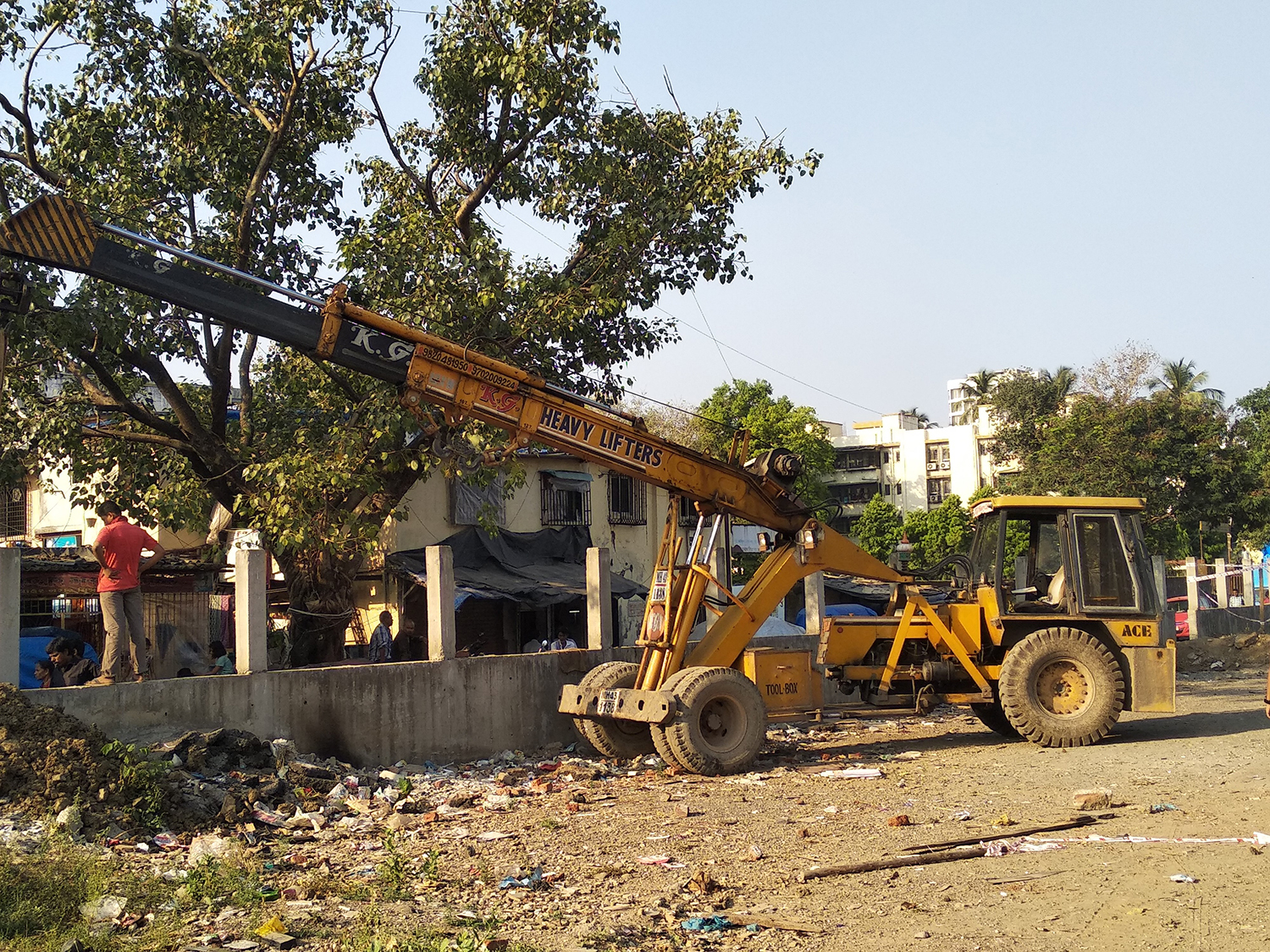 The government was supposed to take a decision on relocation before 1st of October. But the residents of Mahul have not received any decision or intimation from the government till date. Agitated by Government’s callous attitude, the Mahul residents have decided to leave the area, and have for now occupied a footpath in front of the land where they had previously resided, in order to stage an indefinite dharna by the name ‘Jeevan Bachao Andolan’ at Ambedkar Nagar, Vidyavihar since 28th October, 2018. The dharna site was visited by activist Medha Patkar on November 3rd, where she conducted a public meeting, attended by more than a thousand people.

Feature image: Mahul residents sit in dharna opposite to the demolished jhoparpatti.