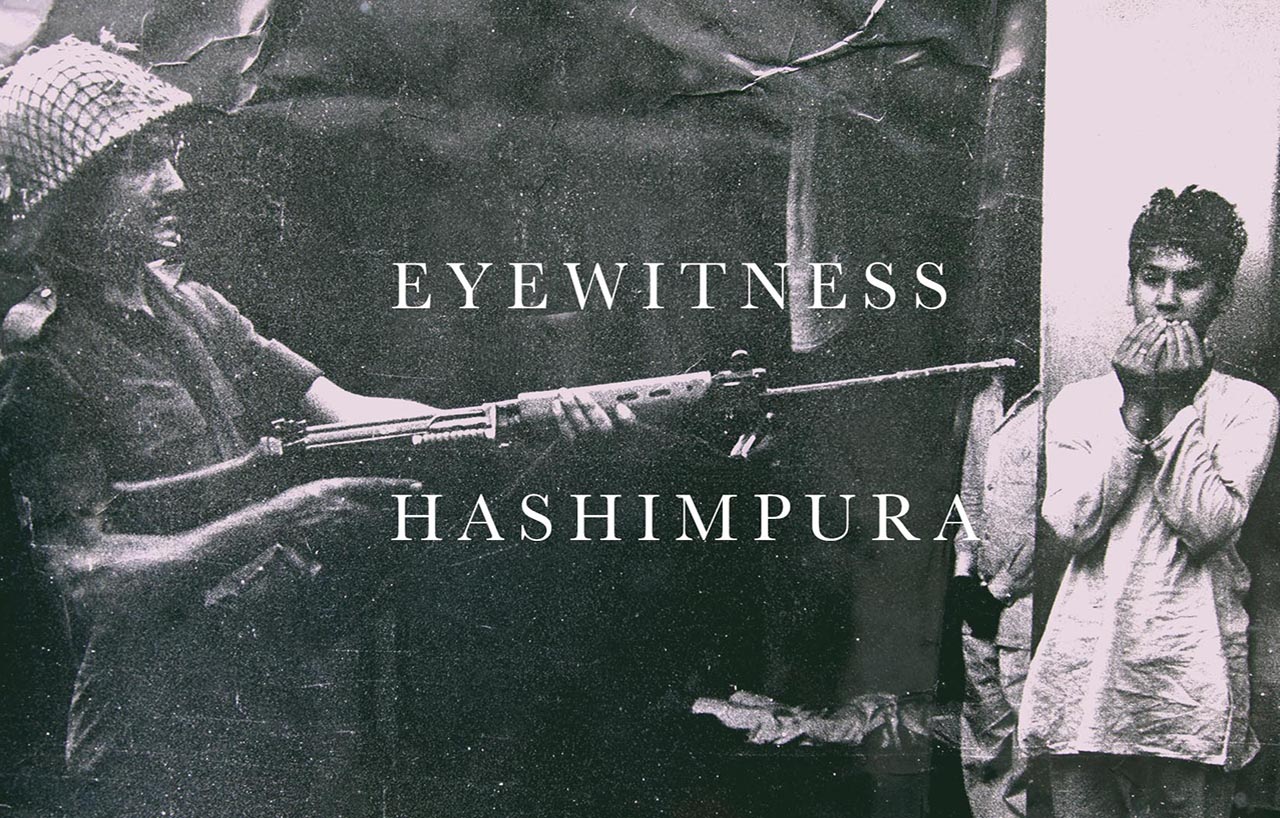 ‘In Cold Blood’ : Republishing A Report on Hashimpura

Groundxero shares an old-report by human right activist and journalist Nilanjan Dutta, who was among the few, who entered the riot-torn area of Hashimpura and brought the truth of the state-sponsored massacre out in the open.

On 31 October, 2018, thirty one years after the Hashimpura massacre near Meerut in Uttar Pradesh, the Delhi High Court reversed a trial court acquittal order and sentenced to life imprisonment 16 personnel of the Provincial Armed Constabulary (PAC), for their role in the killing of 38 Muslims. The High Court bench of Justices S Muralidhar and Vinod Goel, calling the actions of the PAC personnel on May 22, 1987 as “brutal and bone-chilling”, made it clear that the life term awarded to each convict in this case means the “remainder of the person’s natural life”. Earlier on March 2015, the trail court has acquitted all the 16 police personnel who had been accused in the case, concluding that it did not have enough proof that these men were responsible for those deaths. Reversing this order, the High Court, on last Wednesday, held the 16 accused “guilty of the offences with which they were charged viz., criminal conspiracy, kidnapping, murder, causing evidence of the crime to disappear…” The High Court directed the convicts to surrender on or before November 22, failing which the Station House Officers concerned will immediately take them into custody for serving the sentence awarded to each. 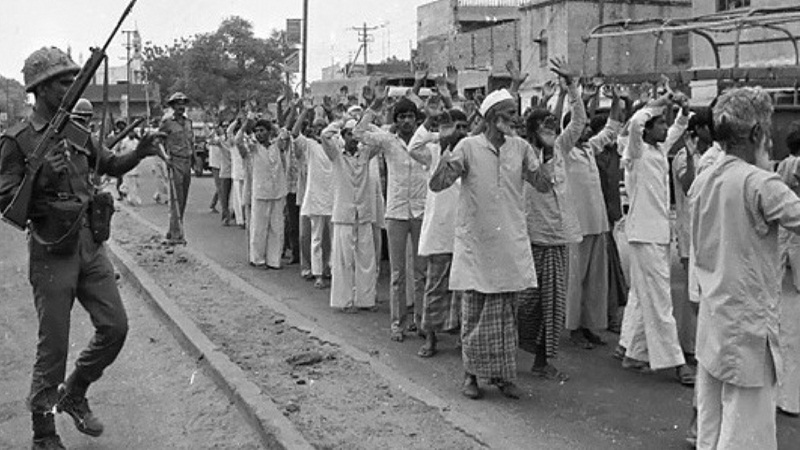 The news of 16 uniformed murderers getting the life sentence for the Hashimpura massacre after 31 years sparked many memories. I was the probably the second journalist to enter the ravished village when the wounds were still gaping and the smoke still coming out. My report in Sunday Magazine, Amrita Bazar Patrika (September 13, 1987) and our photographs (the photographs are by Abhijit Kundu, a friend who accompanied me from Delhi.) was submitted as evidence to the People’s Tribunal that we (APDR) had helped to set up. Hashimpura was a learning experience in more than one ways for me. Today I share with you my old report to give you a feel of how it was.

The Report (In Cold Blood)

A bird is poised in flight over a ripple of water. The unfinished painting showed promise which was never realized. The painter, 23 year-old Siraj Ahmed, was suddenly called out by PAC jawans and, shortly, shot dead.

The Maliana massacre by the PAC gunmen in the midst of the Meerut riots has been reported by shocked journalists to a stunned, disbelieving nation. No less tragic, and terrifying, than the cold-blooded slaughter of Maliana villagers who were nowhere near the riot torn city, the carnage was in another Muslim area. The 1st battalion of the PAC visited Hashimpura, and the inhabitants are mourning the death of more than 40 old friends and relations.

In the headlining style of newspaper coverage, giving more prominence to one event than another, Hashimpura recieved less attention than Maliana. The nation can cope with only one tragedy at a time! But the bereaved were not about to take their loss without a murmur. Meerut is only an hour’s drive from Delhi, and the grieving people of Hashimpura visited the capital daily to press sympathetic circles for action.

“Go to Hashimpura” Syed Shahabuddin told me at his Rajendra Prasad Raod residence when I called on him about the communal tension in Delhi. “If a non-Muslim shows concern for them, and enquires into their plight, they will co-operate readily. Nothing can be more re-assuring than having people from other communities with your kind.” The Janata MP, despite the charges of communalism against him, seemed sincere in his desire for communal harmony.

So it was I found myself on a bus, heading for the scene of a tragedy I had scarcely noticed.

Hashimpura is a small locality, almost a part of Meerut city. The population is Muslim except for four Hindu families. In a city which largely revolves round small business- modest chemical plant and foundaries and gunsmiths – Hashimpura has its own speciality – the power loom units (karkhanas) almost in every house, employing virtually the entire household and a few hundred Bihari workers who live in the area. Fundamentalism has made little headway among these business minded people. Women may speak to you without hiding their faces in burquas. There is no records of communal riots. The Muslims maintained good relations with their few Hindu neighbours. Unlike in Old Delhi, there was communal segregation. Balbibi a Hindu woman who runs a grocery, said : ” people here are too sober to create any trouble.” “Yeh jo log hya na, Hinduon se bhi barian log hain yeh,” she added.

And yet the PAC struck here. After the first paraoxysm of shock, the people regained their responses and went door to door on a doleful casually count, meeting friends and neighbours battered in the carnage, and finding two score missing. After finding bodies floating in a canal, and other gruesome evidence, they had given them up for dead.

Victims like painter Siraj, His elder brother, Miraj, who runs a small type foundry in his house, chocked back his tears as he showed the unfinished painting and other precious memerobilia. “It’s a terrible waste,” he said. “Why did it have to happen to us?”

The sequence of events leading to the massacre was like this:

Communal tension was becoming apparent in Meerut from April. Riots broke out all over Meerut city on May 18. In the night, Hashimpura was suddenly plunged into darkness. The PAC entered the neighborhood and opened fire. Two brothers, Noor Illahi (36) and Alimuddin (18), were killed. Their bodies were taken away and not returned to their family. A rifle was reportedly snatched from the PAC unit.

The next day, tension mounted and a blanket curfew was clamped on Meerut at 10 a.m. In Hashimpura, the PAC men allegedly took up position on the roof of houses belonging to Hindus on one end of the road and began to throw balls of fire on the houses of the other community.

This went on from 10 a.m. to 1 p.m. and resumed the next morning. Hindus, were reportedly instigated by the PAC to set Hashimpura on fire. Several power looms and houses were charred. The extent of damage is yet to be ascertained.

While people were trying to put out the fire, they were shot at by the PAC. Abdul Majid (70) died on the spot and Mohhomad Yamin (27) succumbed to his bullet injuries a few hours later in the Meerut Medical College Hospital.

May 22 was the fateful day when, in the afternoon, the PAC, along with some police and army men, began a combing operation in Hashimpura with the ostensible purpose of recovering the rifle snatched on May 18. Instead, they rounded up 611 people, including 200 Bihari workers. The arrested persons were taken to the PAC camp and mercilessly beaten.

Around 40 people, mostly between 12 and 40 years of age were herded onto a truck. They were reportedly taken to Murad Nagar and shot. The bodies were dumped into the Gang Nahar, a canal near Gaziabad. Only six persons survived the firing with grave injuries.

The other 570 people arrested from Hashimpura were taken from the Police Line to the Civil Line police station and kept there till May 24. They were then transferred to Mainpuri, Fatehgarh, Agra and Meerut jails. Three of them died of exhaustion, suffocation and injuries on way to Fatehgarhi. Five others succumbed to injuries sustained in the torture.

When I went to Hashimpura to investigate the alleged massacre, I find people still suffering from the trauma of PAC violence. Charred houses, some newly repaired or half-repaired, and deserted power looms could be seen everywhere. Emotions were running high. The bodies of those shot dead had not been returned to their families nor any information on them to be had despite repeated applications to the authorities. The members of the family of Jamil Ahmed said the police, in a grotesque gesture, had brought his body home on the day of Id, saying it was an Id gift.

Some of the arrested persons later released said they had been given no food or drink, constantly beaten, insulted and humiliated, even forced to drink urine. They showed their wounds and complained that the beatings took place in front of senior officers. No compensation had been given for medical treatment; only some meager amount was made available to repair houses.

Mahammad Usman (27), one of the survivors of the massacre, had been operated upon at the AIIMS where two bullets and six pellets were taken out from his body.

Lying in bed, writhing in bed, he said, “the Government has given no compensation – neither for my treatment nor for the loss of my earnings. I don’t know when I will be able to work again. With my wife and four children, I am now dependent on the aid of relatives and friends.”

The local people categorically said if anybody from Hashimpura was involved in rioting elsewhere, he should have been arrested and prosecuted. But what the PAC had done was flagrantly communal and criminal, they added.

The PAC, in its 21 years of existence, has set a long record of misdeeds. In 1972 the PAC men has run amok in Firozabad in the name of quelling unrest around Aligarh Muslim University. During the emergency, in 1975, they fired indiscriminately on the people of Sultanpur, who were protesting against the nasbandi operations, killing many.

A similar incident took place in Muzaffar Nagar in 1976. The report of the Judicial Inquiry Commission headed by Ram Ashray Mishra was never made public. On August 13, 1980, the PAC shot dead 130 people in Moradabad, which prompted Bhupesh Gupta, the late CPI leader, to demand in the Rajya Sabha the disbandment of the force. In Meerut itself, 13 people were killed by the PAC during the riots in October 1982.

The National Police Commission, 1981, seems to be aware that state forces like the PAC might not always carry out their duties impartially and might even indulge in criminal activities themselves.

Several instances have been cited when police officers and men appear to have shown unmistakable bias against a particular community while dealing with communal situations.

And yet, no steps have been taken to prevent this. No action has been taken even though a detailed report, prepared by the Home Ministry and submitted to the Prime Minister after the May riots, has found the police and the PAC giving protection to a particular community and participating in violence against the other.

The People’s Union for Democratic Rights, Delhi, has submitted a writ to the Supreme Court against the State of Uttar Pradesh, the PAC and the district magistrate, superintendent of police and relief commissioner of Meerut for Hashimpura massacre. The people of Hashimpura are anxiously waiting for the outcome.

A positive verdict, though far from enough!

The Indian judicial system has been completely ineffective at providing justice in cases of mass violence, especially when those being accused of it are employees of the state. The High Court verdict in this case is a rare acknowledgement of a massacre, perpetrated by the state. Hashimpura is one of the most brazen incidents of extra-judicial killing in independent India’s history.

The positive verdict, even though it came after three decades of legal battle is also partial in nature. While the foot soldiers, comprising of lower ranked PAC personnel has been convicted, none of the senior police officers, the civil administrators and the politicians without whose complicity, a massacre of such a scale would not have happened, remains non convicted.